Six Flags Fiesta Texas in San Antonio will add a record-breaking dive coaster to its lineup in 2022.

Called Dr. Diabolical’s Cliffhanger, the coaster will feature a 95-degree, 150-foot drop, followed by an Immelmann inversion, which means the coaster enters a half-loop and then a half-twist, exiting in the opposite direction from which it entered the inversion.

Other stats for the coaster include: 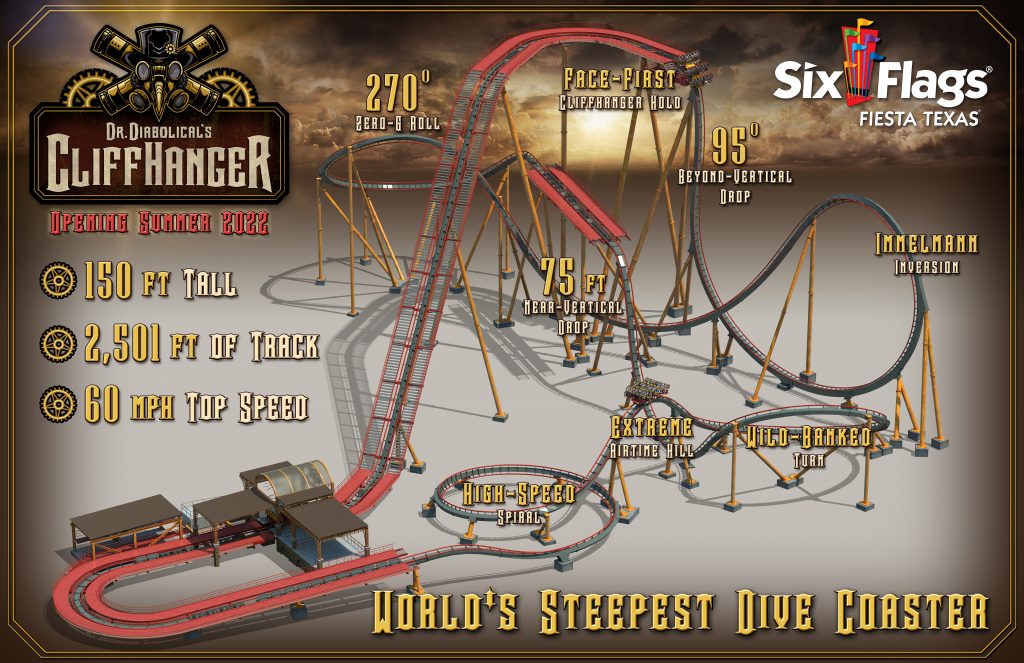 “Six Flags Fiesta Texas continues to push the limits of thrill and innovation as we prepare to introduce the world’s steepest dive coaster during our 30th anniversary season,” park president Jeffrey Siebert said in a press release. “Dr. Diabolical’s Cliffhanger joins an already stellar lineup of record-breaking roller coasters, rides, and attractions. With eight intense elements including dramatic inversions and extreme airtime, it will quickly become a fan favorite.”

Unlike most dive coasters — or most Six Flags coasters, for that matter — Dr. Diabolical’s Cliffhanger will have a theme to fit into the Crackaxle Canyon section of the park. According to the press release, the queue will introduce riders to “Dr. Diabolical and her evil quest to create menacing creatures to frighten the world. To give her creations life, Dr. Diabolical constructed a machine to capture the essence of human adrenaline and fear.”

This will be the 16th installation of Bolliger & Mabillard’s dive coaster model, including the fifth in the U.S. Its immediate predecessor, Emperor at SeaWorld San Diego, has yet to open after being delayed due to the COVID-19 pandemic.

It’s among the few coaster announcements Six Flags has made since the pandemic began and a sign of increasing confidence in amusement parks’ ability to recover. In its second quarter earnings call Wednesday, Six Flags reported that 2021 attendance was so far been 82 percent of 2019 levels, but guest spending per capita in the second quarter of 2021 was up more than 20 percent compared to the same time in 2019.