Details about a new stunt show coming to Universal Orlando next year were briefly posted on the resort’s website, appearing to confirm rumors that the show will be based on the “Jason Bourne” films.

The information came from a post on the Universal site that said “The Bourne Stuntacular” will open in spring 2020.

“Through a cutting-edge fusion of stagecraft and film, you’ll follow our hero Jason Bourne across three continents as sinister characters pursue him, hoping to bring him in,” the post said. “You don’t just watch it. You feel it. See it a few times to really take it all in.”

The post was only visible for a few hours Friday before being removed. 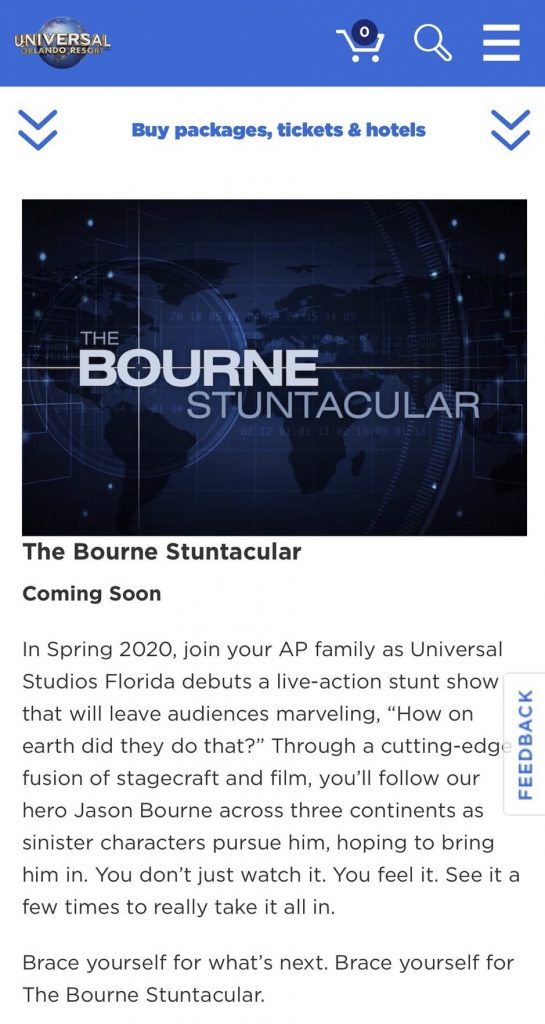 This is not the first time this has happened. In June 2018, the Universal site briefly posted details on the lagoon show coming to Universal Studios Florida. The show was officially announced a week later. A similar mistake was made in December 2018 when the website leaked an expanded schedule for the 2019 edition of Halloween Horror Nights.

“The Bourne Stuntacular” would occupy the space formerly used by Terminator 2: 3-D, which closed in 2017. Unlike the “Terminator” franchise, the “Bourne” films were distributed by Universal, which fits with Universal’s recent moves to base attractions around its own intellectual property (outside of the Warner Bros.-controlled “Harry Potter” franchise).

A 2020 opening for the show would mean that Universal missed the original target date of 2019 for the T2 replacement.

Universal did not respond to a request for comment from Orlando Rising.