This is the fourth installment in an ongoing Orlando Rising series about pieces of Central Florida’s theme park history that live on inside fans’ homes or private collections. Have your own to show off? E-mail us at johngregoryFL@gmail.com!

It’s not just large props from shuttered rides which make it into Williams of Hollywood shop in Universal Studios Florida. In the case of what Joey Mazzant took home, it was a couch — possibly the most famous couch in television.

When Universal expanded the Springfield, U.S.A. area around the existing Simpsons Ride in 2013, one of the additions was a photo booth featuring the famous couch from the Simpsons home. With the family TV acting as the camera, you could be inserted in several of the show’s famous “couch gags.” 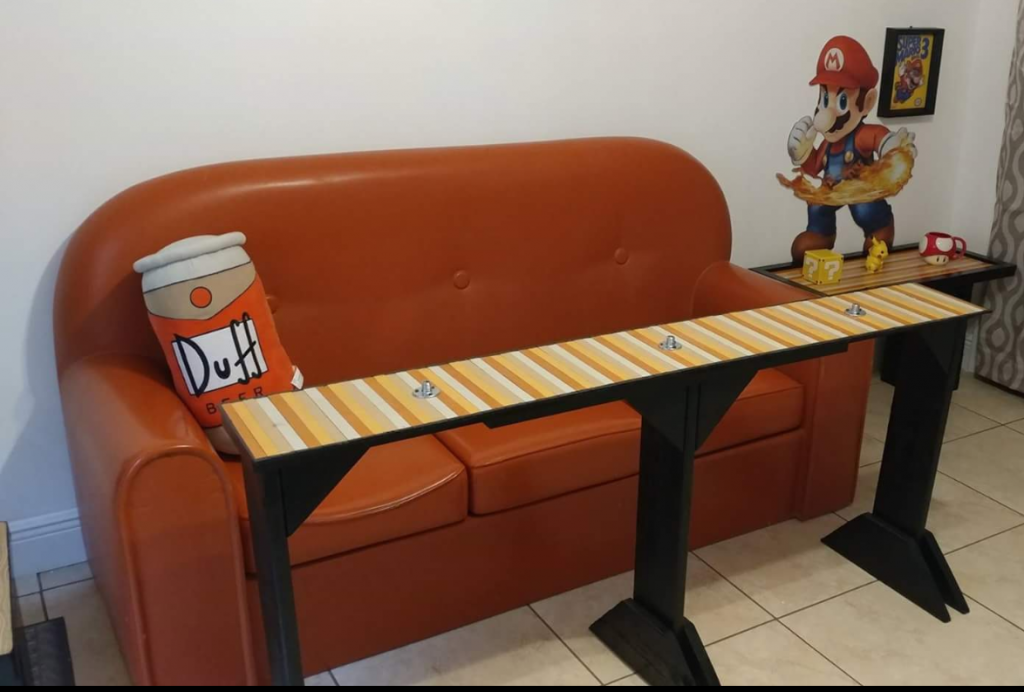 The couch even has Homer’s butt groove (Joey Mazzant)

One of the people who liked the new photo spot was Mazzant. A big Simpsons fan himself, he noticed many of the other guests — outside of Universal regulars — didn’t seem to know how the photo op was supposed to work.

“The Universal photo pass technology was still relatively new. So some people would sit on it, take a pic and walk away, not even realizing that there was a whole interactive part to it,” he told Orlando Rising. “I still laugh about it to this day, the look of confused tourists saying, ‘So what’s this couch from?’”

Mazzant used to joke that he would own the couch one day. That became a real possibility when the photo op was removed late in 2015 and the couch found its way to Williams of Hollywood with a $1,500 price tag.

“So every time I walked past the prop shop I would see it there,” he said. “Team Members knew me by name and Iwould always say the same thing: ‘Yo bros! How’s my couch doing today?’ They would then say, ‘Not yours yet, buddy!’ We would share a laugh and I would leave kinda bummed. One day I walked in and said, ‘Know what? Screw it! I’ve had a good couple months. Let’s do this!’”

Before the couch could truly be his, there was the small issue of how to get it home.

Getting it out of the parks is hard enough under most circimstances, as other fans buying Universal props like a door from Earthquake or a Dorothy from Twister will tell you. All Mazzant had to transport it was a Nissan 350Z coupe, which isn’t exactly conducive to hauling large couches. Luckily, it does have a trailer hitch. 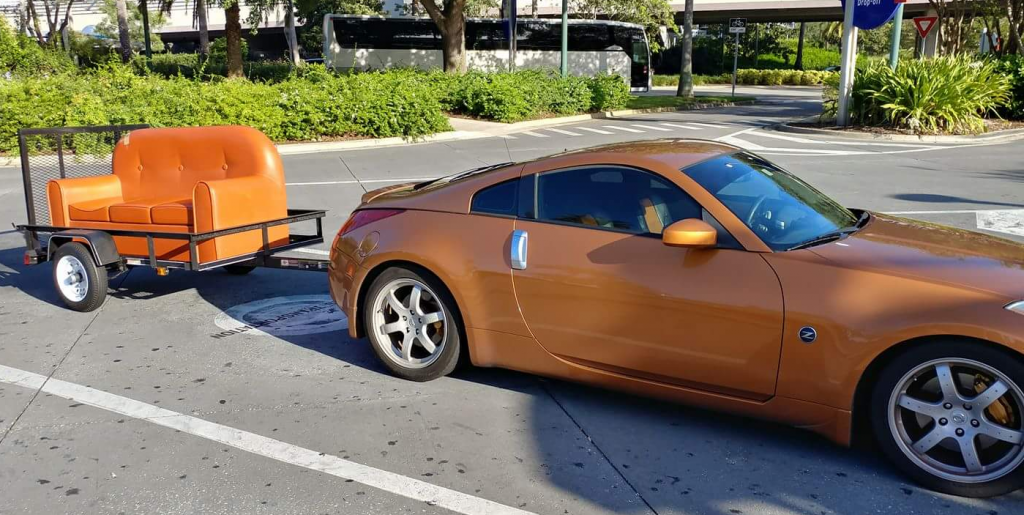 The couch heads to its new home (Joey Mazzant)

He was supposed to pick the couch up at Celebrity Circle, a limited access road close to the entrance to Universal Studios Florida that used to be where on-site hotel guests were dropped off. Universal workers, however, weren’t clued into this arrangement and instead had pushed the couch all the way to the current guest dropoff area past CityWalk.

“I felt so bad and tried to tip them, but they refused it,” Mazzant said. “I then drove home on the turnpike while onlookers laughed hysterically and took pictures.”

As people who took advantage of the photo op in the parks can attest, it’s not a plushy couch, but fiberglass. As Mazzant put it, it’s like “sitting on the hood of a car.” The seats are also reinforced with metal, giving it a few extra hundred pounds.

Comfort was secondary to style here. Mazzant has made the couch the centerpiece of his “nerd room,” where it gets plenty of use while he records podcasts and content for his YouTube channel.

His friends weren’t shocked by the purchase. In fact, they think it’s exactly the kind of thing he would do. The room appears to have space for more park memorabilia, and he’s already got something in mind.

“When the Fast and Furious stuff is ready to retire, I’ve already got blank checks made out to Universal Studios with a note that says ‘Please be nice, I’m a regular,’” Mazzant said.

Have your own piece of theme park history you want to show off? E-mail Orlando Rising at johngregoryFL@gmail.com.

Editor’s note: This story was originally published by the same author on the Unofficial Universal Orlando Podcast Blog.