This is the fifth installment in an ongoing series about pieces of Central Florida’s theme park history that live on inside fans’ homes or private collections. Have your own to show off? Tell us about it at johngregoryFL@gmail.com!

For years, the flagship in-park dining location at Universal Orlando Resort has been adorned with a sign proclaiming it “1 Theme Park Restaurant in the World” for six years in a row.

The braggadocious banner for Mythos also earned some mockery; as multiple editions of the Unofficial Guide to Universal Orlando have pointed out, the awards came from a theme park-centric site, Theme Park Insider, with the six-year streak ending in 2008. In the guide’s latest review, it summed up the restaurant’s menu as “nothing stands out as either great or terrible.”

Hunter Underwood thinks it “genuinely earned” its title as king of theme park dining, but even he liked to poke fun at the banner.

“It was always a good talking point when I brought friends for the first time to the parks,” he told Orlando Rising.

Ending a decade-long drought, Mythos again won top honors from Theme Park Insider as “best table service restaurant” in 2019. So it was time for the old banner to come down. 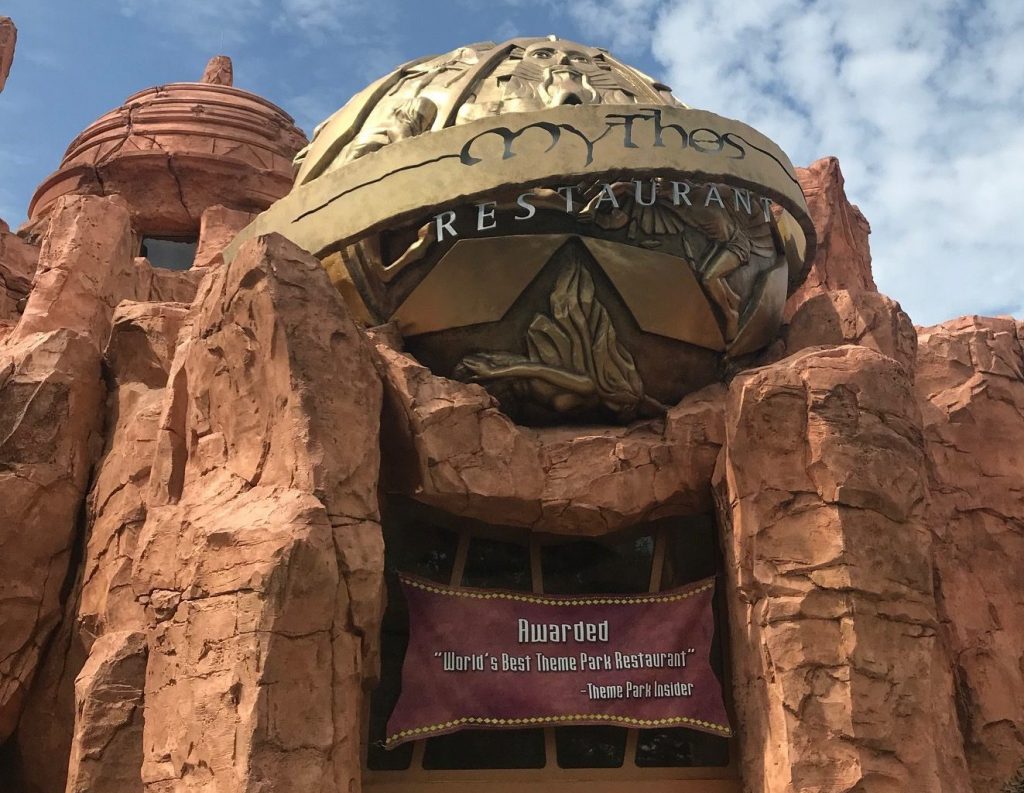 Like other pieces of Universal Orlando history, it’s next destination was the Williams of Hollywood prop shop in Universal Studios Florida. To ensure he wouldn’t get scooped on the sale by another Mythos fan, Underwood asked for help from his friend Joe Machado, who went to the shop and put his name down in its “wishlist book” to get notified when the banner was available.

“It is important to note that they do not hold anything but they at least tell you it is in store and how much it is,” Machado said. “Then on the Fourth of July I got the call, they said it was in the store and was $75.”

This is a bargain compared to other Universal props discussed on Orlando Rising. A couch used in “Simpsons”-themed photo op at Universal Studios Florida, for example, sold for $1,500.

Underwood thinks Universal must not have realized the banner’s true value. He had already pre-negotiated with his fiance to spend around $200 on it, but he’s no stranger to these kinds of deals at Williams of Hollywood.

Machado had first dibs, but couldn’t pick it up that weekend. Underwood went to the park immediately, working through “an unreal amount of anxiety” that the banner would still be there as he dealt with morning rush hour traffic on I-4. Luckily it was, and he carried his new purchase out of Universal in some heavy-duty garbage bags (and without creasing the banner).

“I’ve got it hung by two Hercules Hooks above my office futon, covering nearly an entire wall,” Underwood said. “It’s still overdue for a few more hooks to keep it taught, but I’ve got some constraints with drywall keeping it as taught as it was outside of Mythos. Eventually I’d like to have so many theme park props that I can share them openly with the world. Maybe find a place to rent to showcase them to anyone who wants to see them up close. It’s a pipe dream!”

Part of that dream would include his own bucket list prop purchase: the small, drumming E.T. inside the final scene of the E.T Adventure, along with his alien drum kit.