After the COVID-19 pandemic shuttered and restricted U.S. theme parks for much of 2020, 2021 saw park attendance begin to recover — though not back to its pre-pandemic levels.

The annual report from Themed Entertainment Association (TEA) and the economics practice at professional services company AECOM estimates theme park attendance at the world’s most popular parks. Typically released in late spring, TEA/AECOM instead put out its 2021 report with little fanfare on a Friday afternoon.

Like its 2020 report, TEA/AECOM did not reorder parks from the 2019 rankings or provide cumulative estimates of attendance throughout an entire company’s chain. Its reasoning was that continuing restrictions were the greatest factor in attendance trends.

Still, the signs of recovery were obvious, as North American theme parks saw crowds rise by 136 percent over 2020.

“Total attendance in some areas of the world was in reach of pre-pandemic levels,” John Robinett, senior vice president at AECOM, said in the report.  The speed of recovery was largely influenced by the level of government restrictions, the success of vaccine rollouts, and general consumer confidence levels.”

Magic Kingdom retained its crown as the most-visited theme park in the world with an estimated 12,691,000 visitors. That’s up 80 percent from 2020, but down from the nearly 21 million estimated in 2019.

Restricted capacity, or perhaps TEA/AECOM’s choice to not reorder the 2019 rankings, obscured one major shift: Universal Orlando’s two theme parks beat three of Disney World’s parks in attendance, which had not happened in reports dating back to 2008.

Here were the top five most-attended U.S. theme parks in 2021 based on estimated attendance, not the 2019 rankings used by TEA/AECOM:

Four California parks remained in the top 10 despite being closed for the first months of 2021, beating out parks that were opened year-round like SeaWorld Orlando and Busch Gardens Tampa Bay.

Here’s the top 20 list as presented in the TEA/AECOM report, retaining the 2019 rankings: 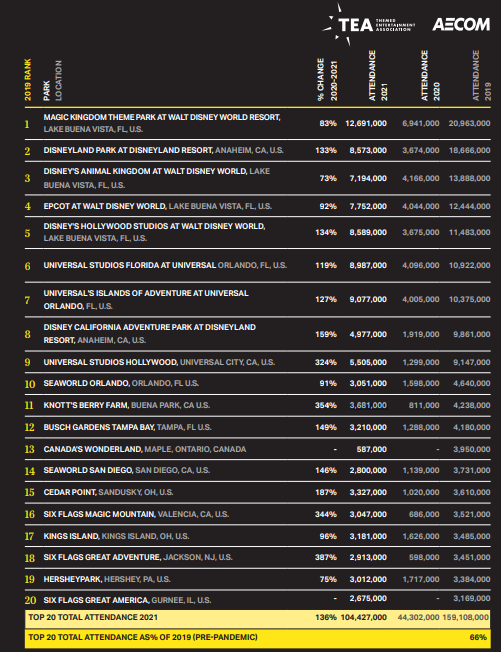 None of the top 20 North American parks matched their 2019 attendance. Cedar Point came the closest, with its estimated 2021 attendance of 3,327,000 guests coming in just 7.8 percent lower than its pre-pandemic figure.