With the sequel to “Jurassic World” about to hit theaters, Universal Orlando is adding two new experiences for guests based on the film franchise—one inside the parks and one at an on-site resort.

The meet-and-greet had originally debuted in May 2015, just ahead of the release for the first “Jurassic World,” which went on to become the highest-grossing film in Universal’s history by taking in more than $1.67 billion worldwide.

But the attraction wasn’t directly tied to the new movie. The original raptors (or, to spoil the illusion, a well-hidden Universal employee operating an intricate raptor puppet) were named Lucy and Ethel and designed by Michael Curry, whose work has been seen in other Orlando attractions like “Finding Nemo — The Musical” at Disney’s Animal Kingdom.

According to Universal, Blue has been designed “employing the exact computer-generated model and images used to create her for the big screen.” Just like the previous raptors, Blue will be snapping and snarling at guests while her “handler” calms her down long enough for a photo to be taken.

“Blue is a welcome new addition to the ‘Raptor Encounter,’ allowing guests to come face-to-face with the clever carnivore,” Universal Orlando said in its press release. “Velociraptors are intelligent and formidable hunters, and theme-park guests are advised to approach them with caution.”

Outside the parks, Universal guests can now bring parts of “Jurassic World” into their hotel stay.

The Loews Royal Pacific Resort is now offering “Jurassic World”-themed kids’ suites. These 2-bedroom suites let kids sleep in their own dinosaur-themed room, with two twin beds modeled after the gyrospheres seen in the 2015 film. 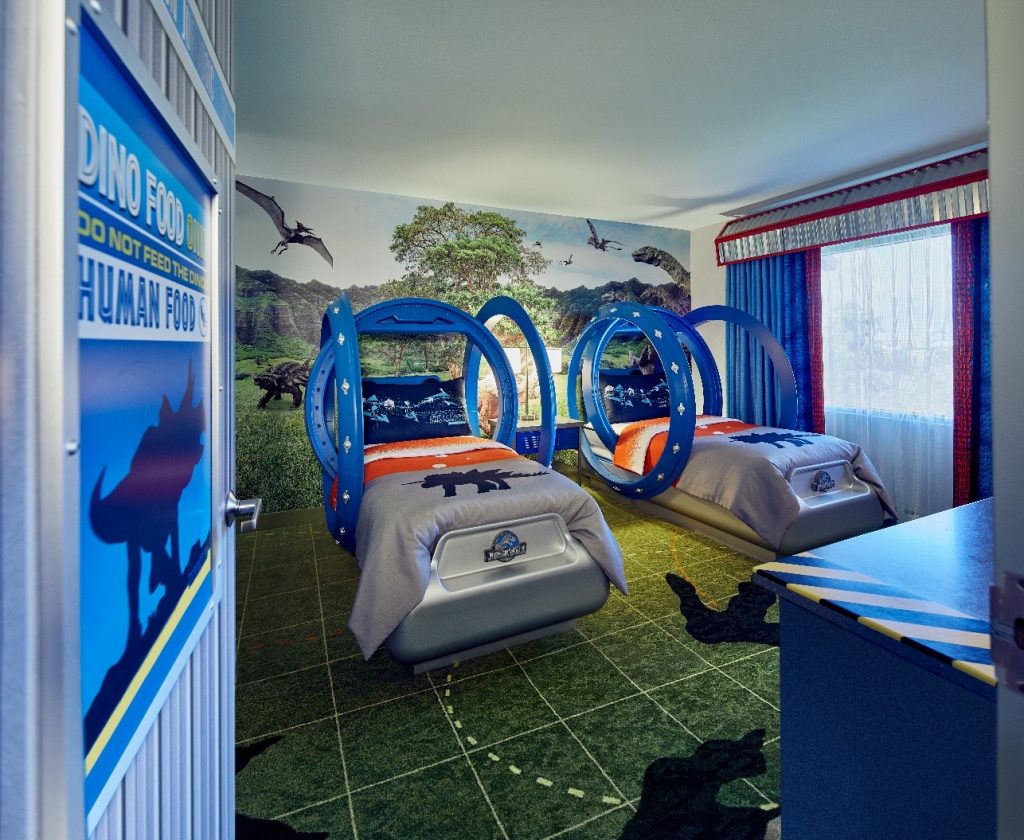 For now, that’s the extent of “Jurassic World” updates for Universal Orlando.

Universal Studios Hollywood is going further, as its version of “Jurassic Park – The Ride” will be closing Sept. 8 for a nine-month overhaul which will turn into a fully “Jurassic World”-themed attraction with new animatronics, audio and special effects. The similar “Jurassic Park River Adventure” in Orlando’s Islands of Adventure, however, isn’t getting the same makeover.

Rumors swirling around Universal’s as-of-yet unannounced third theme park have mentioned a “Jurassic World”-themed section being in the plans for that area near the Orange County Convention Center. The older Jurassic Park area would reportedly see only minor renovations and an additional ride, according to the blog Theme Park University, which had correctly predicted the “Jurassic World” change at Universal Hollywood months before it was officially announced.