Each theme park in Walt Disney World is getting at least one major addition ahead of the resort’s 50th anniversary year. For Magic Kingdom, that new draw will be a “Tron”-themed roller coaster.

First announced at the last D23 Expo in 2017, the Tron coaster began going vertical at its Tomorrowland construction site earlier this month after nearly a year of site clearing and concrete pouring that forced the temporary closure of two other Magic Kingdom attractions. More than 300 steel supports will be installed before it opens in 2021.

“It’s a unique coaster experience for us because you’re kind of sitting on the back of a motorcyle,” Jerold Kaplan, executive project engineer at Walt Disney Imagineering, said in a May 17 video released by Disney. “You’re getting digitized into the digital world, placed on a lightcycle, and get to race as a team against some opponents.”

The ride first debuted in June 2016 Shanghai Disneyland — the only Tomorrowland which doesn’t feature a version of Space Mountain. It has been very well-received, according to Bill Zanetti, a founding member of the University of Central Florida’s Entertainment Management Advisory Board, and is being imported despite no “Tron” film having been released since 2010.

“I think ‘Tron: Legacy’ really is a very strong brand. It has gained a sort of cult-like following, and many, including myself, are still clamoring for more Tron films,” Zanetti said. “If you want proof, look at how popular ElecTRONica was at Disney’s California Adventure. In addition to that, the Tron: Legacy tag in World of Color was one of the most popular tags they have ever done.”

So why place it in Magic Kingdom? Already the most-visited theme park in the world with an estimated 20.9 million guests in 2018, the park isn’t getting the grander overhauls ahead of the 50th like Animal Kingdom’s Pandora, Star Wars: Galaxy’s Edge and Mickey & Minnie’s Runaway Railway at Disney’s Hollywood Studios, or the reimagining of Epcot.

But the park still needs more for guests to do.

“Magic Kingdom is severely lacking in this area and needs more rides as quickly as possible,” he said. “The park has also been very unbalanced for quite some time, mainly due to Splash Mountain and Big Thunder Mountain Railroad being next to each other. By adding a major coaster next to Space Mountain, it should help with spreading out the crowds.”

Past the 50th anniversary, Tron could be the start of a larger refresh of Tomorrowland. 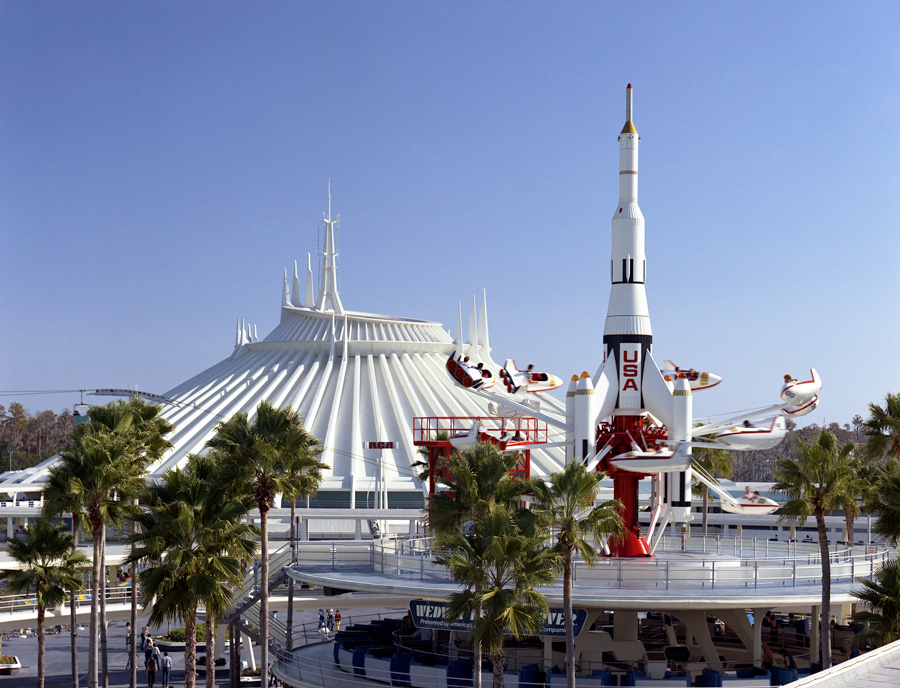 Long the most problematic of all the sections in Disneyland-style parks, the original Tomorrowland in the Magic Kingdom was largely based around the 1967 “World on the Move” redo of the land in California. A Space Age-esque optimism was conveyed by the bright white exteriors covering early rides like If You Had Wings and Flight to the Moon.

That look was replaced in 1994 with the land’s current “future that never was” concept, with gold gadgetry and darker blues and purples meant to resemble a spaceport as envisioned by early science fiction.

25 years later, the land’s identity is muddled; classics like Space Mountain and Walt Disney’s Carousel of Progress sit alongside Monsters Inc. Laugh Floor and the empty space once used by Stitch’s Great Escape.

As Zanetti sees it, Tomorrowland “needs a complete overhaul” — perhaps one that plays off Tron’s aesthetic.

“If I were Disney, I’d go for a classic clean look in the daytime, and then go all out on lighting everything like TRON Legacy at night,” Zanetti said. “The recent painting being done in Tomorrowland tells me that they are abandoning the Buck Rogers theme of previous years, but really that’s not enough. They need to come up with a true identity for Tomorrowland as they did in Disneyland Paris’ Discoveryland.”

The changes so far amount to just some splashes of color, such as a teal wall near the Merchant of Venus gift shop and orange and purple shapes around Auntie Gravity’s Galactic Goodies.

It could be the start of a major retheming— or it could just be some fresh coats of paint head of the 50th anniversary crowds.

“The bottom line is for Disney to either double down on the Buck Rogers sci-fi theme or abandon it for a something better, but it better not just be new paint everywhere, because that would be a huge disappointment,” Zanetti said.