The trial for Patrick Spikes, a former Disney World employee accused of stealing and selling items from Disney attractions, has been cancelled.

Scheduled to begin Jan. 21, the trial is now listed as canceled on the Orange County Clerk of Courts website. The only upcoming proceeding in the case is a plea hearing scheduled for Feb. 4.

The Orange-Osceola State Attorney’s Office and Spikes’ attorney, LeRoy Costner, did not respond to Orlando Rising’s questions asking why the trial has been cancelled and what’s at stake in a potential plea deal.

Spikes faces four charges, including grand theft and dealing with stolen property, related to allegations that he and friend Blaytin Taunton stole and sold items from the Haunted Mansion at the Magic Kingdom. The saga involved NBA player Robin Lopez, who unwittingly bought (and later returned) items stolen from the Epcot’s shuttered “Cranium Command” attraction.

Spikes had gained infamy among Disney fans by posting backstage photos from around the parks under the name “BackDoorDisney” on Twitter and Snapchat. He was later mocked when the Orange County Sheriff’s Office released a video of his questioning and arrest in December 2018, which included Spikes being tackled by detectives and later asking if he could call his mother.

Having been largely silent since his arrest, a man claiming to be Spikes began posting on the message boards at fan site WDWMagic.com over the weekend, claiming that he would be “walking with no felonies” and accusing police of unlawfully obtaining evidence from his phone without a search warrant.

Orlando Rising has not been able to verify whether these posts actually came from Spikes. He and his attorney did not respond to multiple requests for comment. 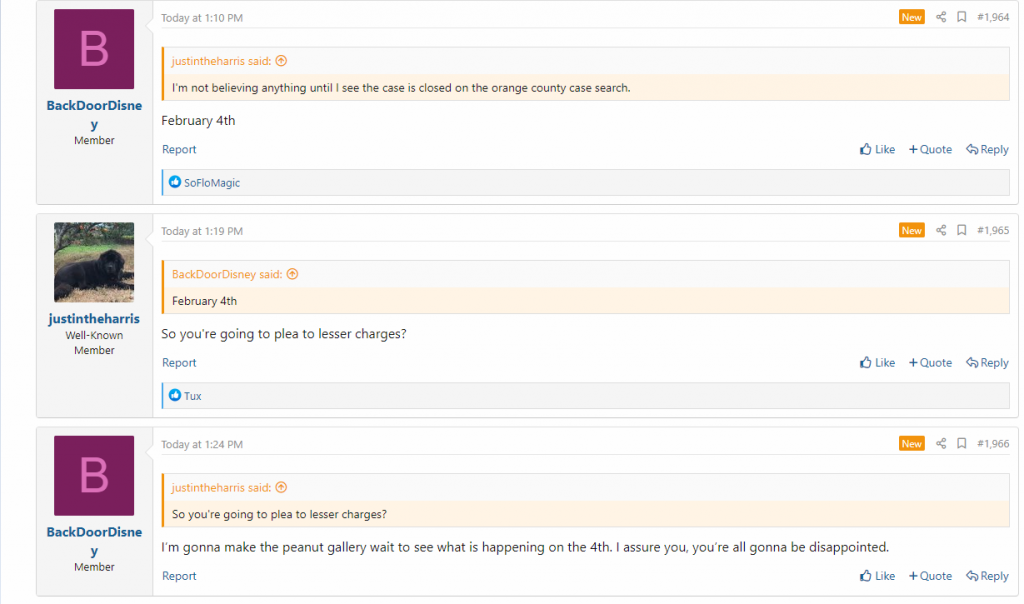 Whoever is posting under the BackDoorDisney name on WDWMagic.com, they promised to reveal more information related to Buzzy, the animatronic star of “Cranium Command” that was reported stolen in November 2018.

These posts reference Feb. 4, the date of Spikes’ scheduled plea hearing, though Spikes has never been charged in connection with Buzzy’s theft.

Orlando Rising was the first to confirm in May 2019 that Buzzy had indeed been stolen. The Orange County Sheriff’s Office has since investigated rumors that the animatronic never left Disney, with Orlando Rising being mentioned by name in police reports.

There has been no recent change in the status of the Buzzy investigation.

“The animatronic has not been recovered, and it is an open and active investigation,” OCSO investigators told Orlando Rising. The office did not address questions about the message board posts’ claims that new information in the theft would be revealed after Feb. 4.

RELATED STORIES:
5 biggest new theme park attractions coming to Central Florida in 2020
Disney gets a pass when companies cut ties with SeaWorld over animal welfare
Why Disney World isn’t getting a 5th park