Wonder Woman Golden Lasso Coaster at Six Flags Fiesta Texas has been temporarily closed due to an unspecified issue with the coaster’s trains. 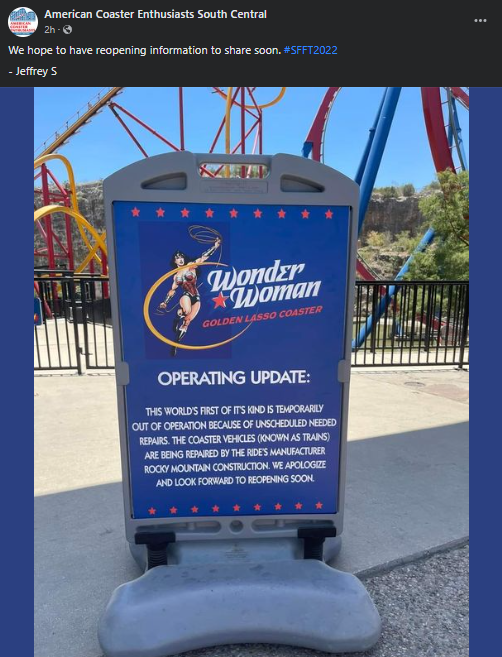 The coaster is one of several, identical single-rail Raptor coaster models from Rocky Mountain Construction. Theme Park Tribune has not received a response from California’s Great America and Silverwood Theme Park asking if their versions of the coaster need the same repairs. A larger Raptor coaster opened at Six Flags Great Adventure in 2021 under the name Jersey Devil, and another is under construction at Six Flags Magic Mountain.

Guardians of the Galaxy: Cosmic Rewind will get holiday overlay later this year

The newest Disney World roller coaster, Guardians of the Galaxy: Cosmic Rewind at Epcot, is barely a month old, but it will get some temporary, seasonal changes later this year.

As part of its announcements of holiday offerings, Disney said the Guardians “will trade in their classic hits playlist for a mash-up of seasonal jams.”

Disney also announced seasonal overlays would be returning to Jungle Cruise, Space Mountain, Tomorrowland Speedway, Monsters Inc. Laugh Floor and Mad Tea Party at the Magic Kingdom. With the exception of Jungle Cruise, those other transformations will be exclusive to attendees of the returning Mickey’s Very Merry Christmas Party.

Universal Orlando is closing Williams of Hollywood, the unique shop that allowed guests to take home park-used props and even pieces of old attractions.

“Williams of Hollywood Prop Shop at Universal Studios Florida is scheduled to permanently close on June 26 to make way for a new retail experience. More details will be shared in the months ahead,” Universal said in an unsigned statement to WKMG.

Theme Park Tribune has previously shared stories from Universal fans who bought props at Williams of Hollywood, including a door from Earthquake: The Big One, one of the Dorothy props from Twister….Ride It Out, and a banner that once hung above the Mythos restaurant.