A new theme park is planned to open to the public in early 2023 in Punta Cana in the Dominican Republic.

Called Katmandu Park | Punta Cana, the new property is based around an original intellectual property developed by entertainment development company Falcon’s Beyond.

“Katmandu Park | Punta Cana will deliver an unprecedented theme park experience based on the popular characters of our very own Katmandu fantastical universe,” Cecil Magpuri, CEO of Falcon’s Beyond, said in a press release. “Through innovative rides and attractions that deliver unmatched and immersive storytelling, guests will truly lose themselves in the Hidden Realms of Katmandu. Combined with other day and night entertainment, dining and shopping, Katmandu Park will offer an extraordinary experience for families and theme park lovers in the premier resort location of Punta Cana.” 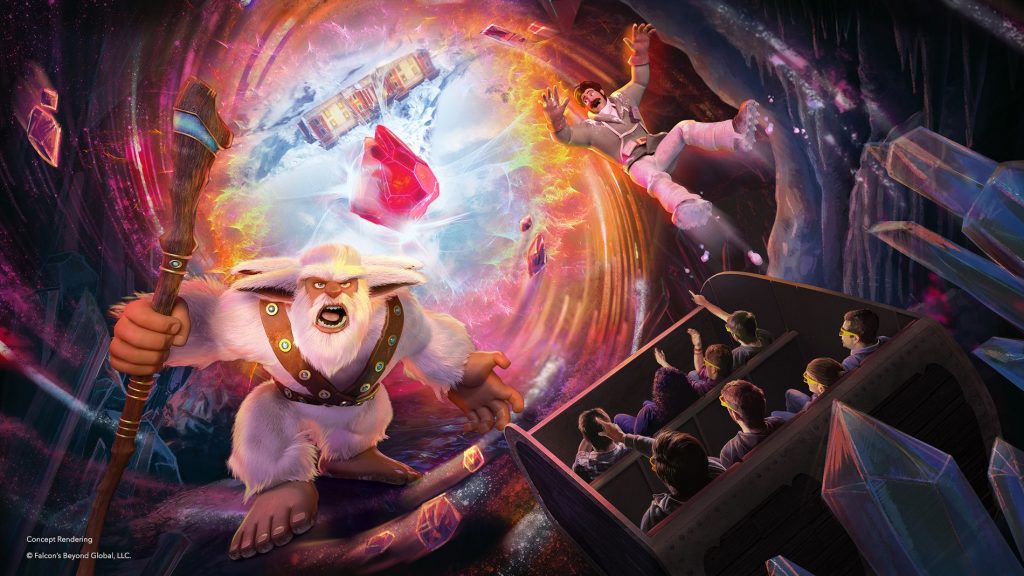 Legend of the Desirata (Falcon’s Beyond)

Attractions will include a 4D dark ride called Legend of the Desirata, a “suspended theater” ride dubbed Voyage of the Fathom Wanderer, and Challenge of the Mad Mage, an interactive shooter attraction inside a theater.

The park will initially open exclusively to guests of the Falcon’s Resort by Meliá this December, with the general public having to wait until early next year.

Disney World’s version of “Fantasmic” will be back in November, though Disney did not announce a specific date for its return.

The nighttime show at Disney’s Hollywood Studios hasn’t been performed since the COVID-19 shutdown back in mid-March 2020. The show is expected to have several changes from its last incarnation, as concept art released by Disney has hinted at “Aladdin,” “Frozen,” and “Moana” characters being introduced.

The Disneyland version of “Fantasmic” resumed performances in May.

No deal yet between Disney World, unions after two-day negotiation

A coalition of unions representing 41,000 Walt Disney World workers failed to reach a new labor contract with the resort after a two-day negotiation session.

Unite Here Local 362, one of the member unions of the Service Trades Council Union, said Tuesday that “While progress has been made on many workplace improvements, several critical economic items remain open,” including wages, health care benefits and paid parental leave.

The coalition’s 2018 deal with Disney, which secured a series of minimum wage increases, is being extended on a month-to-month basis until a new contract is signed. All wage increases will then be retroactive to Oct. 2, 2022. The next set of negotiations are scheduled for Nov. 1 and 2.