Disney is relaxing its stringent dress code and appearance guidelines for theme park workers, including allowing “appropriate” visible tattoos for the first time.

The changes are part of the company’s inclusiveness initiative, which has led to changes to racist scenes in Jungle Cruise and the upcoming redo of Splash Mountain.

“Our new approach provides greater flexibility with respect to forms of personal expression surrounding gender-inclusive hairstyles, jewelry, nail styles, and costume choices; and allowing appropriate visible tattoos,” wrote Josh D’Amaro, chairman of Disney Parks, Experiences and Products, on the official Disney Parks Blog on Tuesday. “We’re updating them to not only remain relevant in today’s workplace, but also enable our cast members to better express their cultures and individuality at work.”

D’Amaro continued, “Moving forward, we believe our cast, who are at the center of the magic that lives in all our experiences, can provide the best of Disney’s legendary guest service when they have more options for personal expression – creating richer, more personal and more engaging experiences with our guests.”

The “Disney Look,” the commandments regulating how cast members dress, has been restrictive since the days of Walt Disney. Even as late as 1989, Disney fired three employees for the grievous offense of growing a mustache. It took until 2010 for the company to allow women to forgo pantyhose when wearing skirts.

King Arthur Carrousel, the centerpiece of Disneyland’s Fantasyland, will look refreshed and ready until the park reopens on April 30.

The carousel — an opening day attraction at Disneyland in 1955 — had closed for refurbishment in January 2020. That overhaul lasted longer than expected thanks to Disneyland’s year-long COVID-19 shutdown. 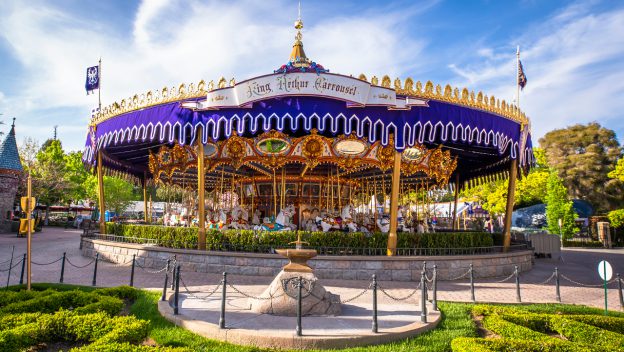 According to a Disney Parks Blog post, each of the ride’s horses were repainted by hand.

The ride will have a slightly new neighbor in Fantasyland, as the revamped Snow White dark ride will also debut with Disneyland’s April 30 reopening.

The International Association of Amusement Parks and Attractions confirmed Monday that it plans on hosting an in-person convention in its typical pre-Thanksgiving slot from Nov. 16-19, 2021. The 2020 edition of the IAAPA Expo had to be cancelled due to the COVID-19 pandemic.

“This past year has been unlike any other our association, and our industry, has ever encountered,” said IAAPA president and CEO Hal McEvoy. “Members have been looking to us to help them push the industry forward so guests around the world can safely return to the fun we are known for. The best way we can do this is by bringing the industry together for our global Expos.”

While the expo is geared towards attendees who work or provide services to theme parks, family entertainment centers and arcades, the show tends to feature breaking news that excites the average theme park fan. In 2018, for example, Legoland Florida announced that it was building what would become the Pirate Island Hotel.