The top theme parks in the world in 2019 saw their attendance plummet 67 percent in 2020, according to a report released Thursday.

Typically, this annual report from the Themed Entertainment Association (TEA) and the economics practice at professional services company AECOM  includes updated lists of the most-visited parks worldwide and by region.

However, because steep attendance declines across the industry thanks to COVID-19 restrictions, TEA/AECOM decided not to reorder the Top 25 parks globally or the Top 20 in the Americas, instead just providing updated figures for the parks that made the 2019 list. Without this context, the rankings may seem wildly off; for example, Disneyland is still ranked No.2 both worldwide and in North America, despite the fact it was closed for nine-and-a-half months of 2020. Based on the actual 2020 estimates, the real No.2 would be Shanghai Disneyland.

“The 2020 attendance numbers are largely due to regulatory restrictions limiting parks’ operating days and capacities and not park popularity and management,” said AECOM senior vice president John Robinett. “We are already seeing a surge of pent-up demand. The speed with which guests returned to parks and museums once they reopened attests to the vital role these leisure outlets play in people’s lives.”

Magic Kingdom retained its bragging rights as the most-visited theme park in the world. Here are the full lists, with the rankings based on the parks’ 2019 positions. 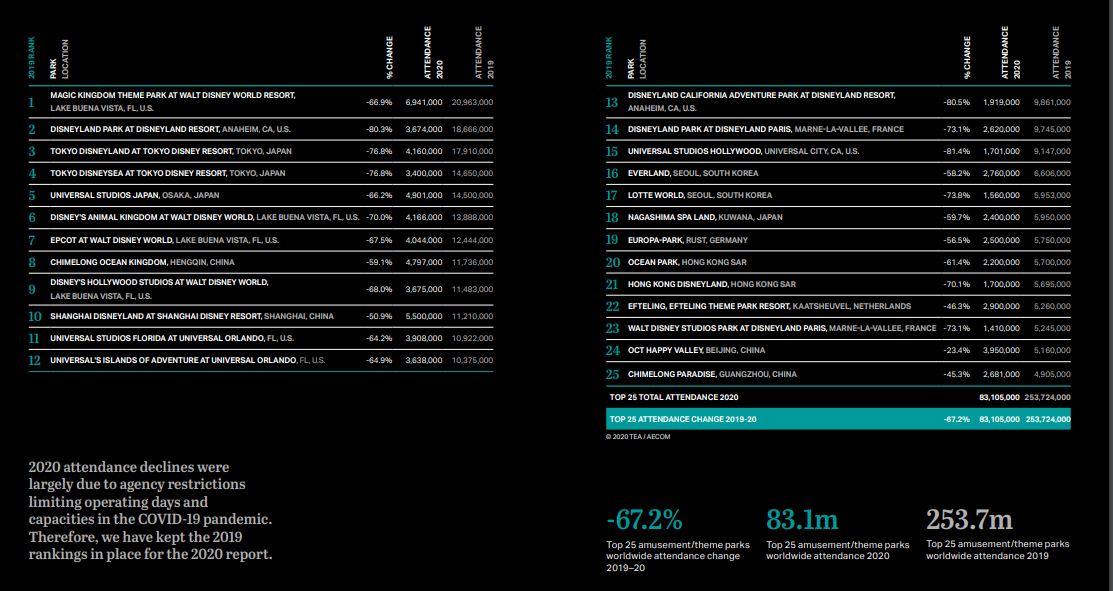 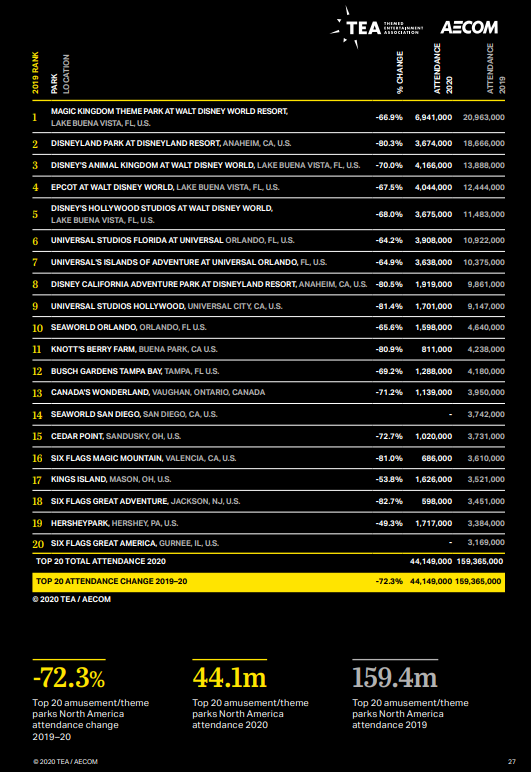 Universal Orlando workers will be allowed to sport visible tattoos, as well as nail polish and makeup regardless of their gender, under a new dress code policy.

As reported by Spectrum News 13, the altered appearance guidelines allow for “tasteful visible tattoos,” with size limitations, anywhere except a worker’s hands, face, neck, or head. Previously only allowed for female employees, makeup and nail polish can be worn by anyone.

Disney World had made similar changes to its dress code in April.

To mark its 10th birthday, Legoland Florida will open a new walk-through exhibit called The Legoland Stort on Oct. 15.

According to a press release from the Winter Haven park, the Legoland Story will cover the history of Legos, how the Legoland theme parks are built, and include an original ride vehicle for the Triple Hurricane roller coaster at Cypress Gardens, the precursor to Legoland Florida. The three models from the finalists of the second season of the “Lego Masters” competition will also be on display.

On the same date, the park’s Miniland will reopen, now with a new canopy to keep both guests and Lego models under shade from the constant Florida sun.

The park’s 10th anniversary will also feature Birthday Bash Party Pop-Ups that include “play moments, surprise character appearances and pop-up entertainment,” according to the press release. Guests can also sample a new treat, the Apple Fries Cupcake, based off the park’s signature Apple Fries.

Earlier in 2021, Legoland Florida debuted a new 4D movie themed around the Lego Mythica sets. The resort will expand to a new gate in 2022 with the addition of Peppa Pig Theme Park Florida.