Construction will begin next year on a third parking garage at Disney Springs, part of a $360 million expansion that received huge tax breaks.

The 2000-car garage is part of a renovation project to the entertainment district, which was formerly known as Downtown Disney. It also includes two pedestrian bridges, the widening of Buena Vista Drive and an extension off an Interstate 4 exit ramp leading directly into a Disney Springs garage.

Disney’s Reedy Creek Improvement District financed the project with tax-free bonds and also didn’t pay sales tax on materials used in the construction process. The sweet deal dates back to 1967 when the Florida Legislature approved the Reedy Creek district as a government authority giving it total autonomy within its borders.

Critics accuse the Walt Disney Company, the largest employer in Central Florida that earns billions in profit each year, of taking advantage of a legal loophole. The tax breaks also give Disney a distinct advantage over other theme parks in the area. Universal Orlando did not receive any government assistance when it built its two parking garages in the late 1990s.

And while the Reedy Creek district’s autonomy may seem unfair, it’s all legal.

“Fairness is in the eye of the beholder and the legislature set up this district decades ago, and that’s the law,” said Joe Follick, communications director for Florida TaxWatch, a nonprofit research group in Tallahassee.

“Certainly Orlando has become one of the world’s top tourist destinations in that time,” Follick added. “It is up to voters and their elected legislators to determine if they want to change anything or create other districts for other entities.”

Disney claims its three garages serve a public purpose by easing traffic congestion. Before the Disney Springs makeover, people complained there was never enough parking. In fact, it is on one of the few places guests can park for free at the resort.

The newest garage will be located across the street from the 120-acre retail complex and will not only serve guests but employees as well. A pedestrian bridge across Buena Vista Drive will connect Disney Springs to the newest garage, which will be completed by 2019.

The company has done everything by the books. The Florida Legislature specifically gave the district the ability to build parking garages — along with everything from an airport to a nuclear-power plant. Reedy Creek lawyers vetted the proposal and found a precedent in Miami, where a development district financed a parking garage for a commercial development called Midtown Miami.

Having Reedy Creek build the garages brings substantial savings to the Walt Disney Company. Because investors do not have to pay federal income tax on the interest they earn on municipal bonds, they will accept lower interest rates than they would with conventional, corporate bonds.

The move also keeps the garages off Disney’s corporate balance sheet at a time when investors have been pressing company executives to curtail capital spending because guest visits are down. 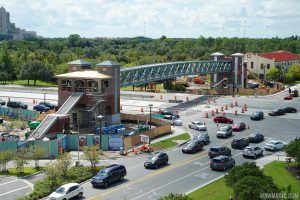