With Super Nintendo World now set for a 2023 opening and Halloween Horror Nights on the horizon, there’s plenty of construction work happening around Universal Studios Hollywood.

Starting out on the Upper Lot, you can get some amazing views of Super Nintendo World as its buildings begin to take shape. 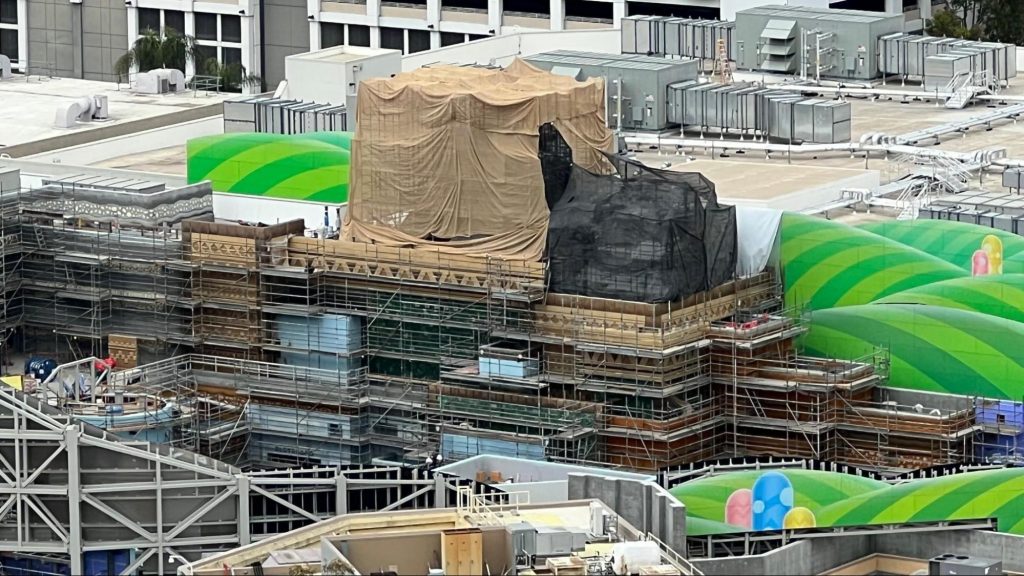 The photo below focuses on the future entrance to the land through a green warp pipe. The large building behind it is the Mario Kart attraction, which is almost as big as the land itself. The ride is nearly complete and several Universal team members have already been given a chance to test out the ride. 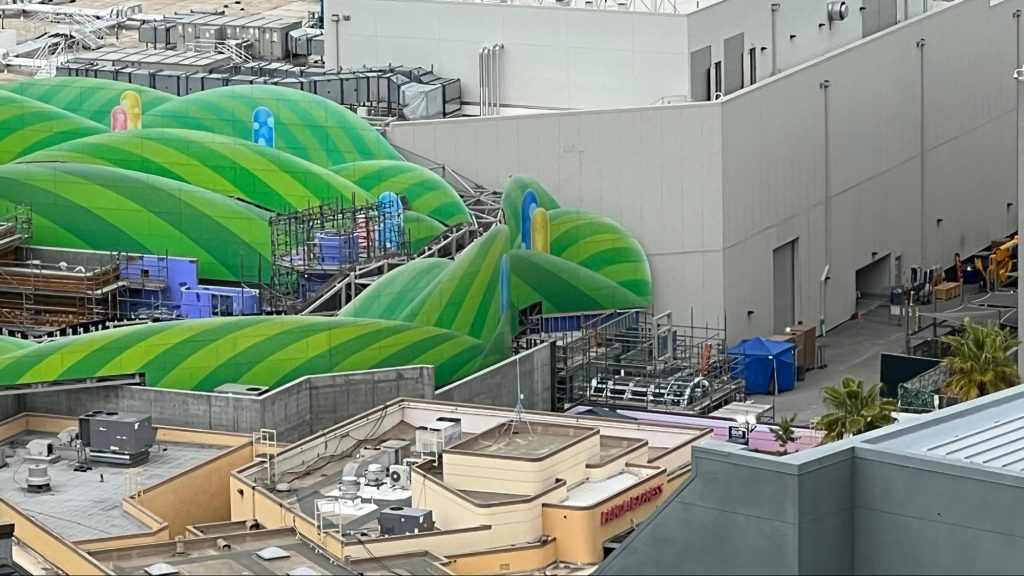 Mount Beanpole is currently wrapped up in tarps, but when finished, it will have a lot of kinetic energy thanks to animatronics and other moving elements. 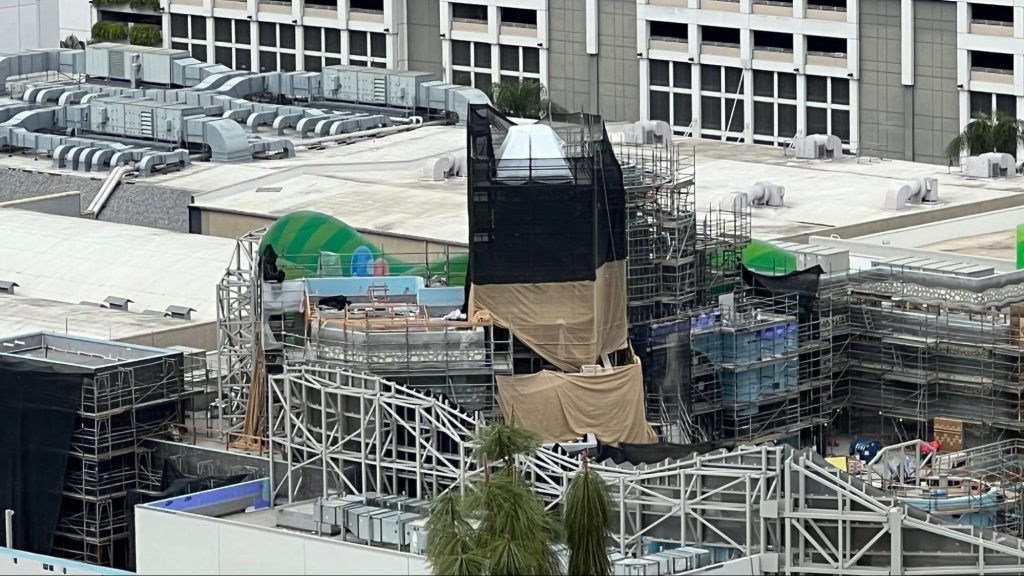 Next to Mount Beanpole you can see Bowser’s Castle taking shape, as you can see the castle ridges forming underneath the scaffolding. Those four, large squares will eventually hold Bowser’s head and mark the entrance to the Mario Kart ride. The circular shaped building in front of the castle will be the entrance to Toad’s Cafe, the land’s quick service restaurant. 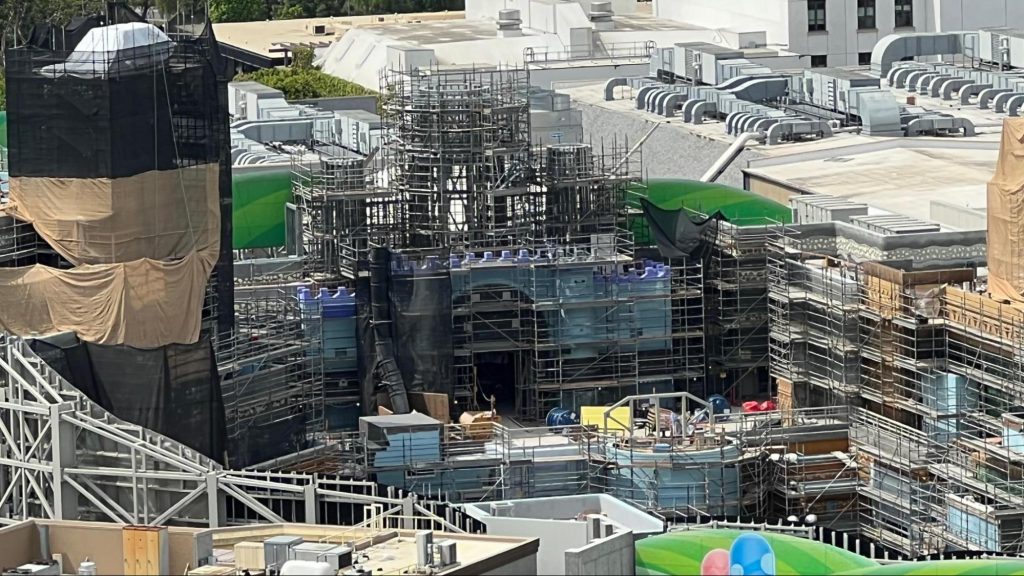 You can head down the escalators to the Lower Lot to get a closer view of the land’s entrance. 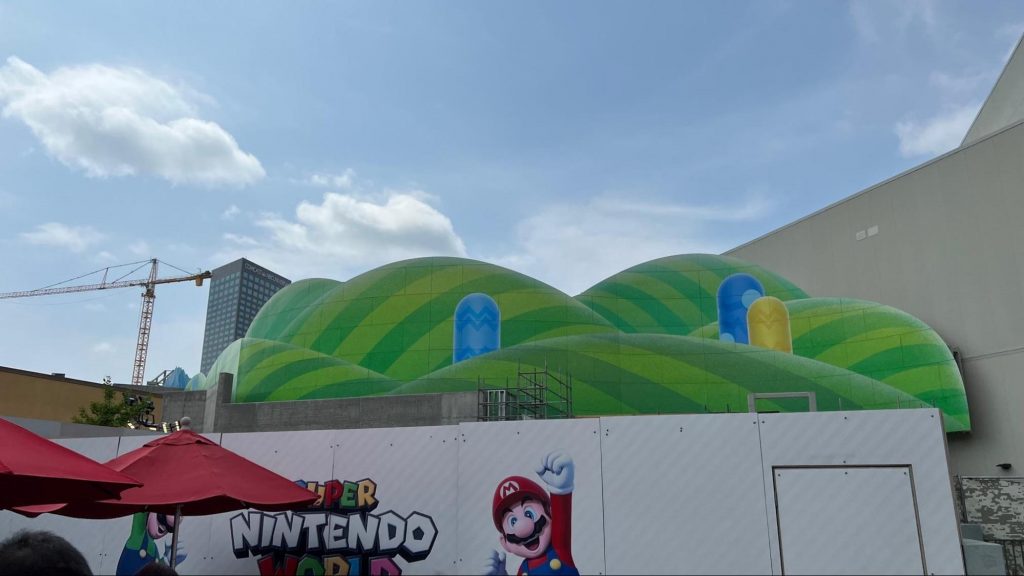 This picture was very difficult to get because Universal has erected new construction walls near the old seating area to the left and moved all the tables and chairs into the walkway. But getting this close gives you an idea of the scale of the land as it will appear once you’re inside.

Outside of Nintendo construction, work has already begun on Halloween Horror Nights houses, five months ahead of the annual event. In the Curious George parking lot, a maze is under construction that is rumored to be an original creation called Scarecrow. 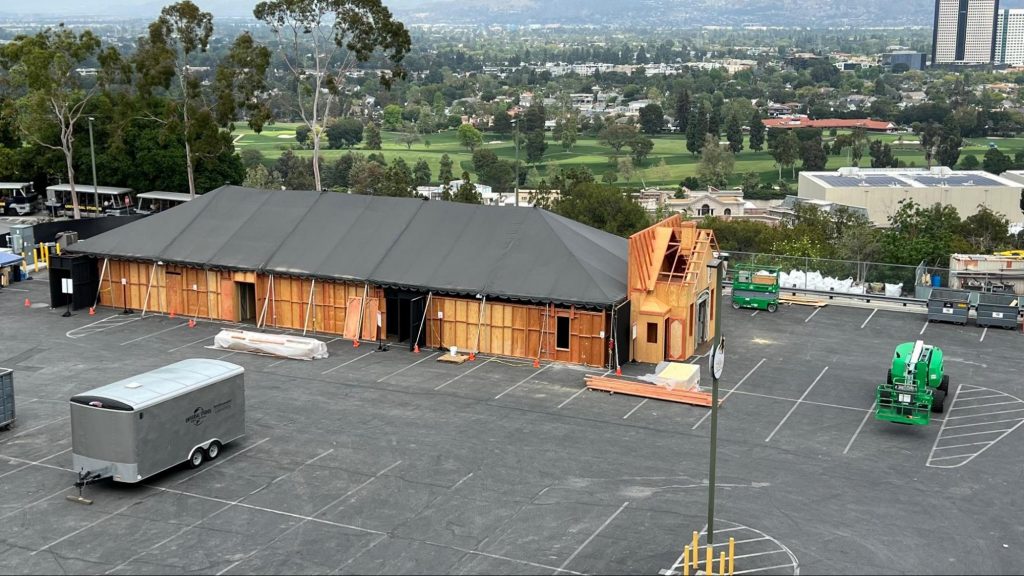 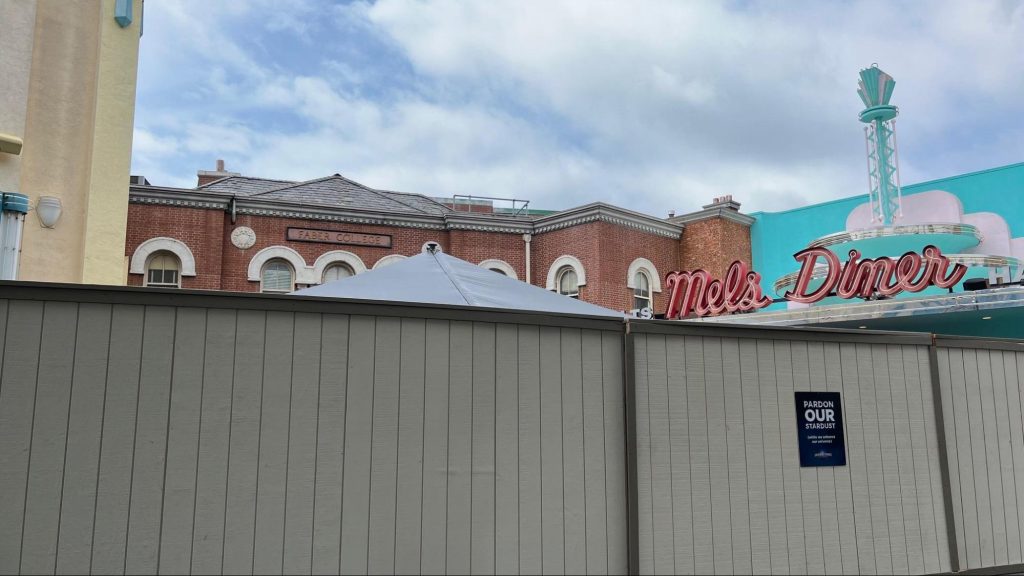 Next to the Revenge of the Mummy show building, another house is in the works. Fittingly, this location is rumored to be themed around “The Mummy.” Note that this house appears to feature a two-story facade! 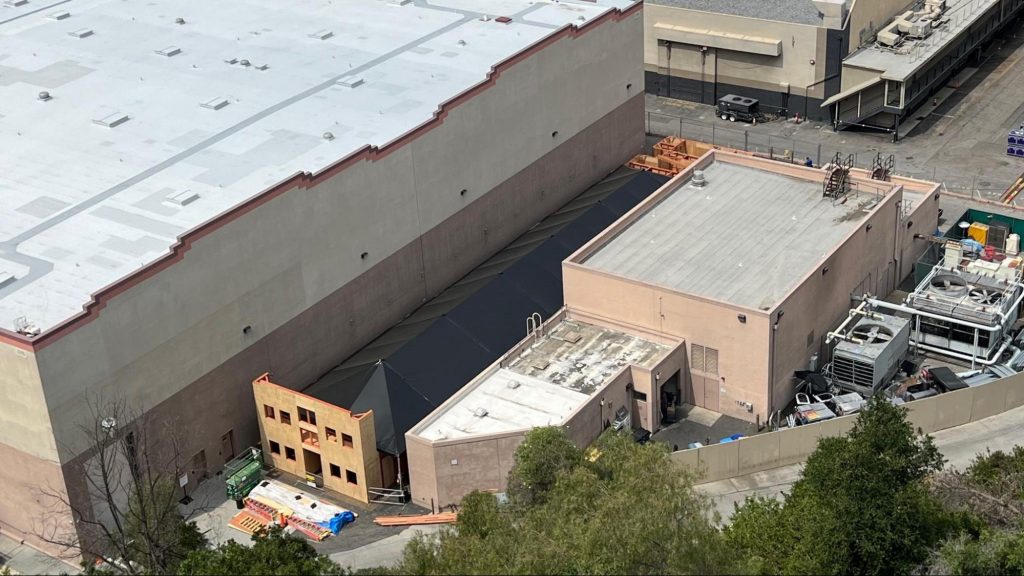 In CityWalk, work continues on the Toothsome Chocolate Emporium being built on the former site of Hard Rock Cafe. It appears a foundation is being laid for a patio along with some underground electrical work. 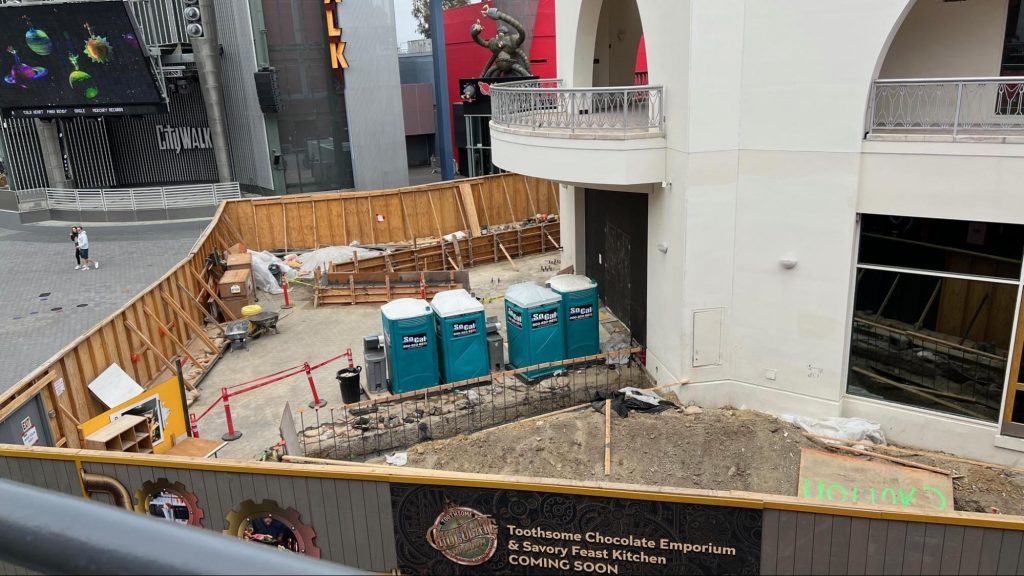 The newest addition to CityWalk, Chick Chick Chicken, opened on April 1, taking over the spot once occupied by Ludo Bird and used as a temporary Butterbeer stand when the theme park was closed. This fast casual restaurant serves all types of fried chicken and chicken sandwiches. 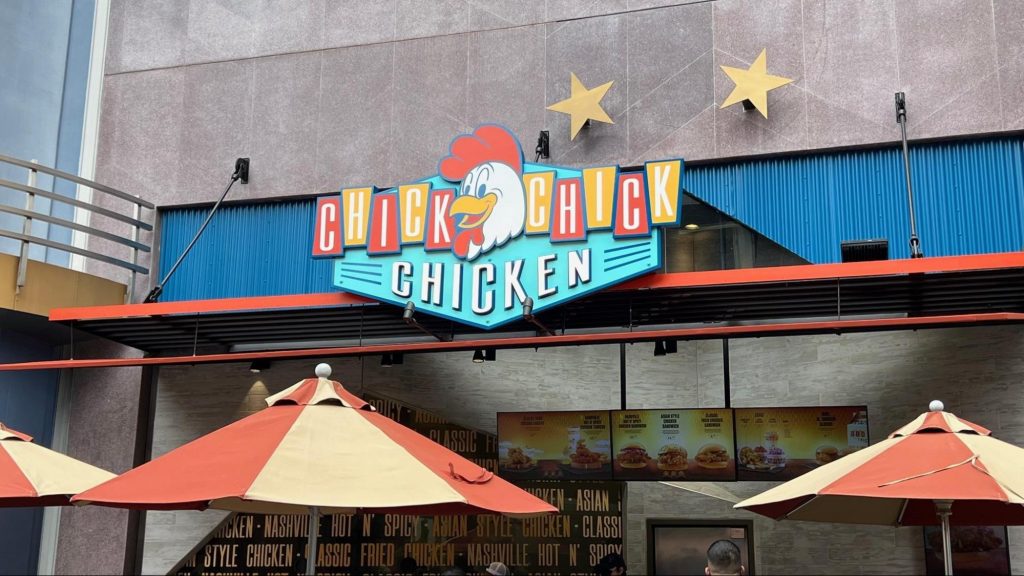 A few recent closures include Blaze Pizza and Starbucks. However, this gives Universal a chance to combine the spaces into a much larger restaurant or store. 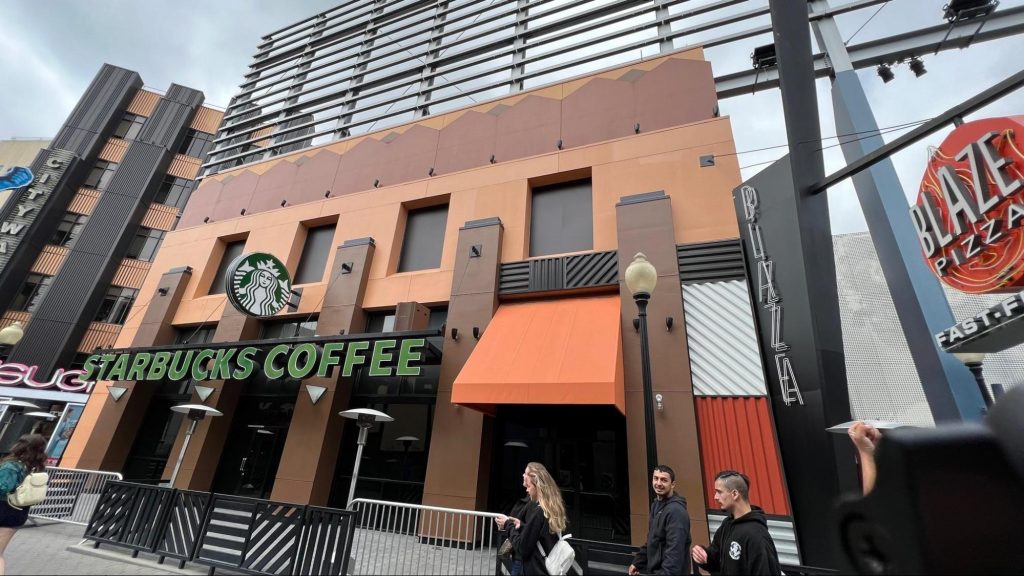 Thank you for joining me on this little tour and big update from Universal Studios Hollywood. I love going to this park and checking on the amazing progress that is happening every week and I hope you enjoyed reading it as much as I enjoyed writing it.