The 7-foot-long male dolphin was found stranded on Sanibel Island and arrived at SeaWorld shortly after midnight Wednesday.

SeaWorld’s veterinarians are providing fluids, antibiotics and conducting a complete health assessment.  The vets say the 205-pound dolphin is a strong swimmer, which is a positive sign and they are cautiously optimistic the animal will continue to improve.

The dolphin is the second animal rescued this week by SeaWorld Orlando. A manatee that was found stuck in a Jacksonville pipe is also rehabilitating at the theme park’s backstage area.

SeaWorld Orlando’s Animal Rescue Team is on call around the clock to save and care for injured, orphaned or ill animals. SeaWorld animal experts have helped more than 29,000 ill, injured, orphaned and abandoned animals during the past five decades.

If you see an injured marine animal, call the Florida Marine Mammal Stranding Hotline at 1-888-404-3922. 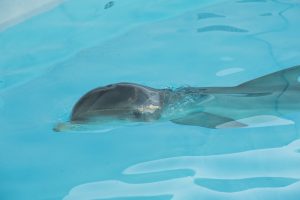