Flowers that bloom year-round combined with the sweet drinks served outdoors at theme parks create a perfect home for honeybees.

“Bees have gotten a bad rap,” said SeaWorld Orlando Veterinarian Lara Croft, who devised the honey therapy after trying the concoction on an injured pigeon whose wing wouldn’t heal. “Bee colonies are in peril, and our company is allowing them to reproduce, and we reap the added bonus of their honey.”

The healing use of honey can be traced back to ancient Rome. The practice has been resurrected during the last decade in the holistic care of both humans and animals. Honey has antibacterial properties that help pull fluids and debris out of wounds, Croft said. It also brings energy and nutrients to cells to encourage healing.

The honey is placed in a refrigerator for two weeks where it crystallizes. Then vets make it into a paste to put on wounds and top it off with a diaper rash ointment called Ilex so it will stay in place. The mixture sticks to wounds, especially on sea animals whose Band-Aids peel off in water.

“I’ve just been blown away by how fast and well honey heals,” Croft said. “Saving the bees has caused a ripple effect that has helped save our animals.”

SeaWorld recently redefined its mission after years of declining revenue following the Blackfish movie that criticized the company for keeping killer whales in captivity. While the theme park has always rehabilitated injured animals, its conservation programs have become its new face.

And honeybees are the perfect conservation species because of their importance to our food chain. They pollinate about one-sixth of the flowering plant species worldwide and approximately 400 different agricultural plants. During the past decade, bees have been dying off at an unprecedented rate — up to 30 percent a year — due to climate change. Seven types of honeybees found on the Hawaiian Islands were added to the endangered species list this year.

SeaWorld’s Honeybee Conservation Program has been going on quietly just beyond the screams of SeaWorld’s Mako roller coaster. Since the project started in July 2014, 52 honeybee swarms or more than 1 million bees have been saved and relocated off park property.

Honeybees are attracted to Mason jars of sugar water attached to 17 swarm buckets that simulate a natural tree cavity located on the perimeter of Discovery Cove, SeaWorld and Aquatica. This decreases the risk of stings to humans and animals while redirecting the bees to safer areas, so they continue pollinating plants.

Russell said he’s never received complaints about guests or employees being stung, but bees flying up outdoor soda fountains do cause problems.

A horticulturist checks on the swarm buckets daily and, once full, transfers the bees to hives where they produce the amber-colored honey that SeaWorld vets use as natural medication. Then the bees are relocated to a registered beekeeper that manages the colony off property.

SeaWorld works closely with the Florida Department of Agriculture to ensure the relocation of the bees are monitored. Occasionally, swarm queen bees are replaced with more docile Italian honeybee queens, in a process called re-queening. This changing of the queens results in a colony that is much less defensive and contributes to better honeybee genetics.

“Conservation, education and rescue rehabilitation of animals has always been our core mission, and we’re just telling our story a little more than in the past, said Suzanne Pelisson Beasley, SeaWorld’s corporate communications manager. “While bee conservation is a relatively new program, it’s not a complete departure from our DNA as a company and it’s just another way to be good stewards and continue our conservation work.”

SeaWorld’s conservation efforts have saved more than 29,000 animals during the past five decades. The Honeybee Conservation Program has been so successful that SeaWorld plans to replicate it at some of their other parks. 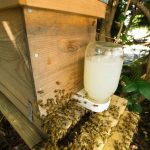 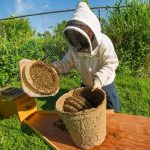 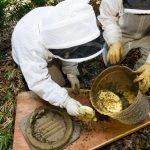 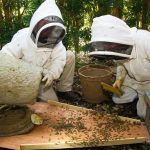 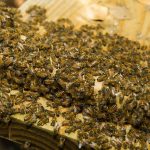 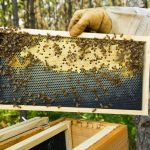