In an age where its biggest competitors seem intent on cutting live entertainment whenever possible, Universal Orlando Resort began the 2020s by adding a new stage production: “The Bourne Stuntacular.”

Being the first stunt show that the resort has opened since 1999’s Seven Voyages of Sindbad, “Bourne” represents a remarkable technological leap for theme park stunt productions. So remarkable, in fact, that it more than makes up for the fact that the show is based around a stale intellectual property.

Like most stage shows, the queue area for “Bourne” is not elaborate, as you’re not really meant to linger. Graphics do help reintroduce guests to the broadstrokes of the franchise and Jason Bourne’s story. 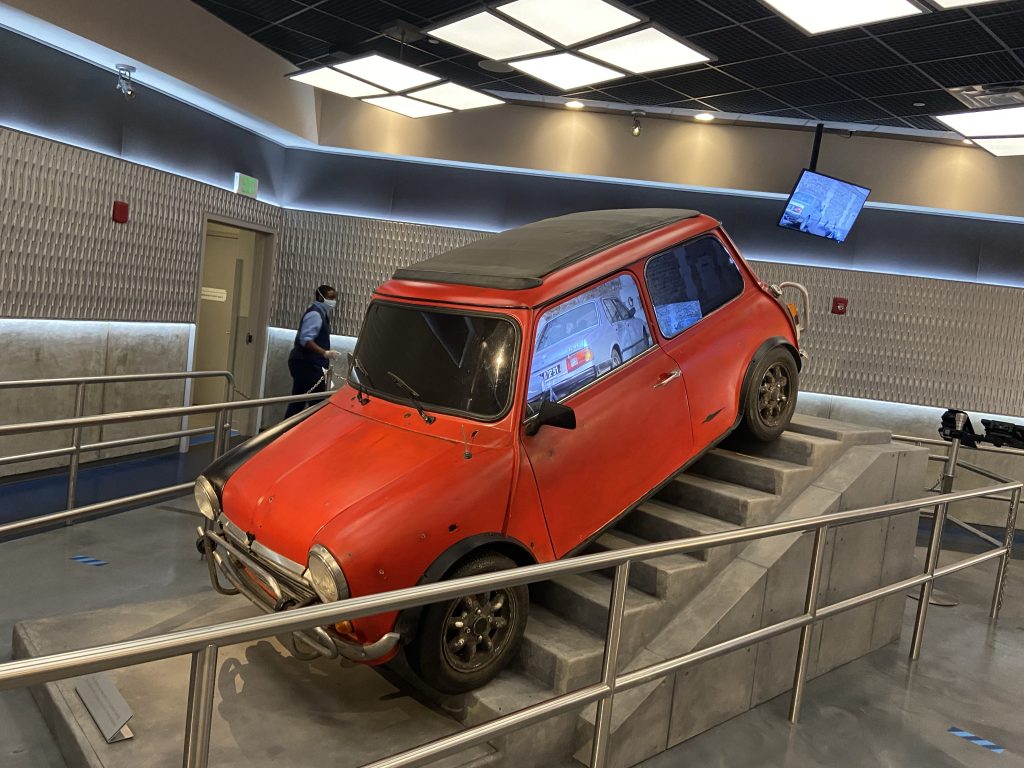 The pre-show area is, of course, the big story setup. Featuring Julia Stiles reprising her role of Nicky Parsons, she explains that guests are joining a “situation analysis team” and goes over Bourne’s backstory of false identity, enhanced government operatives, restored memories, and betrayal. 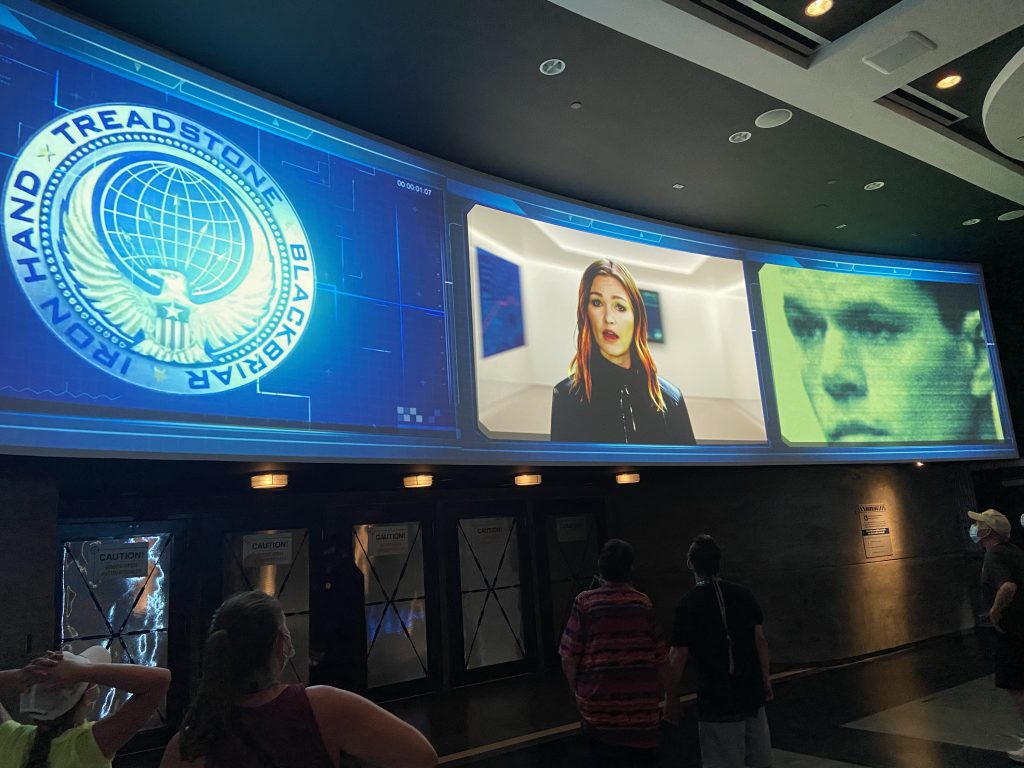 A view of the “Bourne Stuntacular” preshow (Theme Park Tribune)

Like most of America in 2021, I don’t remember much of the details behind the “Bourne” films. I only vaguely recalled that Julia Stiles was in the trilogy. At least her presence provides some connective tissue to the franchise.

All the average guest needs to understand is that Bourne is on the run, he’s dangerous and you’re about to see why. Sounds like fun!

For all the grief Universal has received for relying too heavily on screens, this is one screen-based attraction I don’t think anyone can dislike.

With an expanded theatre from the former T2: 3-D, “The Bourne Stuntacular” manages to take guests to Morocco and Dubai, witnessing dynamic rooftop battles and even high-speed car chases. It’s all thanks to a 130-foot wide, 28-foot tall screen providing a larger backdrop for different locales, blending  in with movable physical set pieces and, in a rehash from T2, allowing the action to transition between live performers to screen footage and then back again. 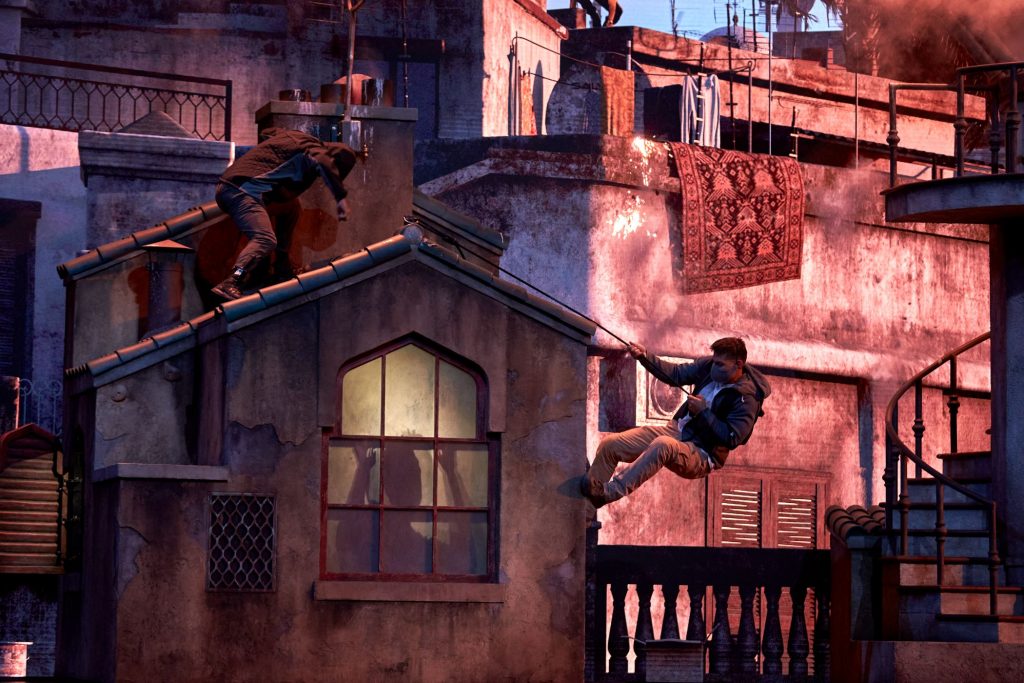 Some of the stunt work (Universal)

If you don’t mind spoilers, you can watch the full show here, but be warned that because filming the show is technically not allowed, I have yet to see a POV which does “Bourne” justice.

Theme parks fans have seen many of these elements before, but they’ve never worked this well together. The incredibly tight stunt choreography is enhanced by the technological capabilities of mixing the enormous screen with practical sets, and vice versa. The show lives up to the adage of being greater than the sum of its parts, and you’ll want to head back for repeat viewings just to see how they pull some of these transitions off.

Having viewed the show multiple times, I recommend viewing the show towards the middle of a row from around four to six rows from the very back of the theater. This vantage point gave me the best appreciation of the show’s scope. 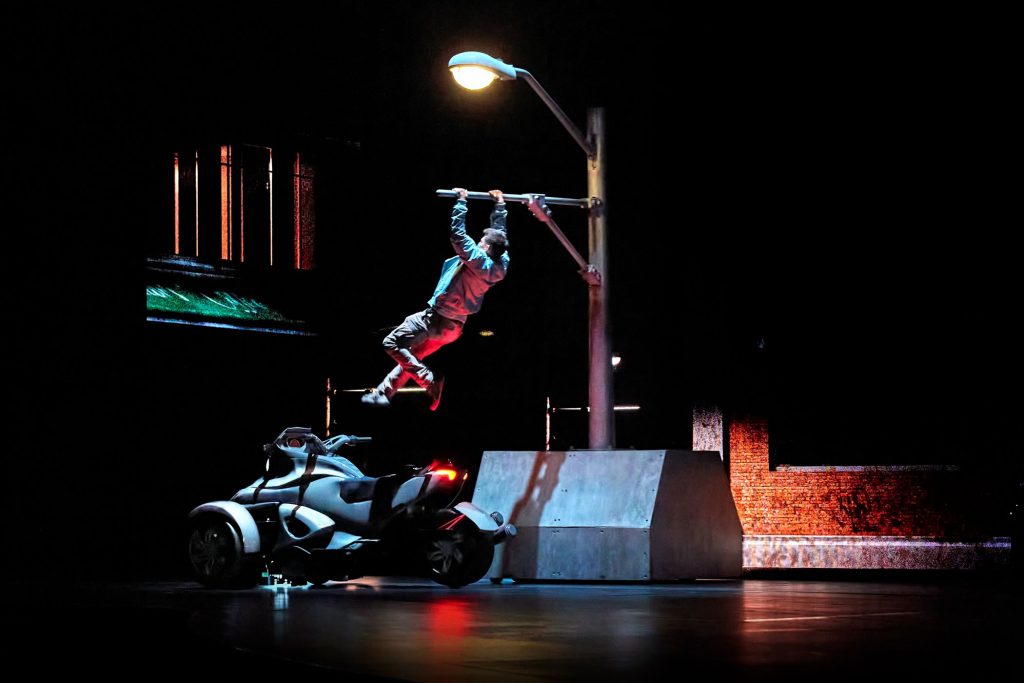 The show even features a “slow motion” sequence” (Universal)

However, sitting closer to the stage, or close to the edges of any row, allowed me to too easily spot the physical set pieces being rotated on or off stage, which only slightly spoiled the effect. You can also more easily distinguish between the physical set and actors and what’s on the screen from those angles.

What holds Bourne back

It may seem like “The Bourne Stuntacular” succeeded on every level, but after multiple viewings, I felt a crucial component was missing: a truly grand finale.

The best theme park stunt shows have left their biggest spectacles for the very end. “Waterworld” at Universal Studios Hollywood is a prime example, leaving audiences amazed by its final stunt of a seaplane crashing into the water.

“Bourne” lacks that kind of “wow” moment to close the show. Its finishing sequence isn’t bad by any stretch, but all of its effects — an actor hanging from a wire, vehicles looking like they’re racing at high speeds when it’s the screens providing the real movement — had already been used by this point in the show, which somewhat dulls their impact on the audience. 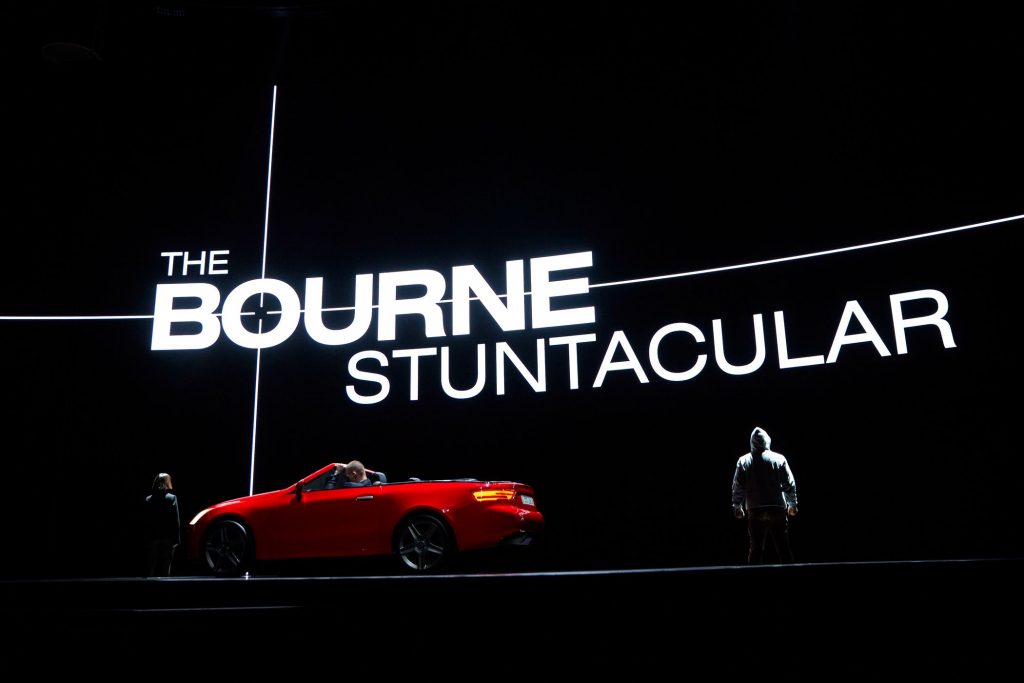 Of course, the theater itself limits the scale of the Bourne show’s finale. I’m not suggesting that I walked away disappointed because a plane didn’t crash in front of me. But having only a good, not great, finale, is enough to keep “Bourne” from being the best theme park stunt show in the U.S.

The other limitation is the franchise itself. The “Bourne” films may have grossed $1.5 billion worldwide, but its most successful entry (“The Bourne Ultimatum”) came out 14 years ago and its “Treadstone” spinoff TV series lasted only one season. It’s no one’s idea of a hot property.

That doesn’t mean the show can’t be a success; just look at the acclaim for aforementioned “Waterworld” stunt show , despite being based on one of the biggest box office flops ever. Still, I can’t help but wonder why this stunt show tech wasn’t saved for a more relevant franchise.

When judging any theme park attraction, it’s important to look outside the attraction itself to answer two important questions.

The first is how does it bolster the park’s lineup? Universal Orlando Resort had lacked a stunt show since “Sindbad” closed, so “Bourne” fills an obvious gap. The only complaint here is that Islands of Adventures has been left without major live entertainment, while Universal Studios Florida sports three regular stage shows with “Bourne,” “Animal Actors,” and the “Horror Make-Up Show.”

None of these, “Bourne” included, are headliner attractions of the park, and that’s perfectly fine. Not everything can and should be an E-ticket, to borrow Disney’s old verbiage for the biggest rides and experiences at its theme park. Stage shows offer some much-needed variety, especially in the case of Universal Studios Florida, which is still overloaded with screen-heavy motion simulator rides. 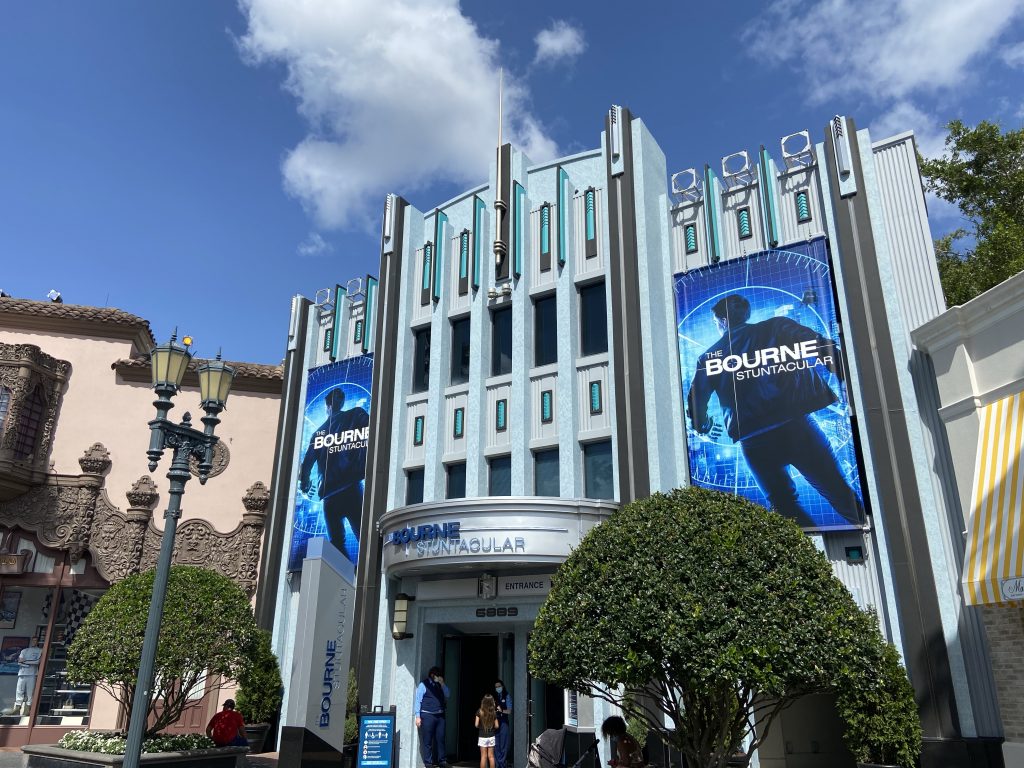 The second question is for any attraction that requires another to close: Is the new experience better than what it replaced?

Terminator 2: 3-D was a marvel for its era. Not only was it a 12-minute, $24 million mini-sequel, but it was actually directed by James Cameron, used the movie’s main cast, and made a great theme park attraction for Universal, seamlessly blending together film and physical elements.

Beloved as it was, the 1996 show looked dated by the time it closed in 2017, surely hastened by the franchise’s inability to produce a decent sequel and the struggles over its rights. “Bourne Stuntacular” is unquestionably an improvement on its predecessor in almost every way — better stunts, better technology, and a bigger production overall. It only falls short when it comes to long-term reverence for the underlying intellectual property.

Whatever the future may bring for the “Bourne” franchise itself, its theme park stunt show is good enough to succeed on its own merits.

DISCLOSURE: This review is based on my own opinion and perspective. I paid for my own park tickets. Universal did not grant me any special access to the park or to “The Bourne Stuntacular” to conduct this review.

Editor’s Note: This review was updated on Oct. 31, 2021, because the original POV video embedded in the review had been removed from YouTube.