DISCLOSURE: This review is based on my own opinion and perspective. I paid for my own hotel accommodations and park tickets. Disney did not grant me any special access to Star Wars: Galaxy’s Edge in order to conduct this review.

Jaw-dropping. Overwhelming. The biggest land Disney has ever built.

Of all the descriptions Disney executives have used to hype Star Wars: Galaxy’s Edge, once I saw it for myself, all I could manage was silent, wide-eyed wonder.

This was the Star Wars universe as I’ve always envisioned it. All I could do was look around in awe at its size and scope — much like I did the first time I walked into The Wizarding World of Harry Potter at Universal Orlando.

Black Spire Outpost is meant to be a galactic trading port that has seen better days, now attracting seedy types like smugglers and bounty hunters. It closely evokes the dangerous space western feel of Mos Eisely from the original 1977 film. Building foundations and ceilings look cracked. Blaster marks have scorched the walls. 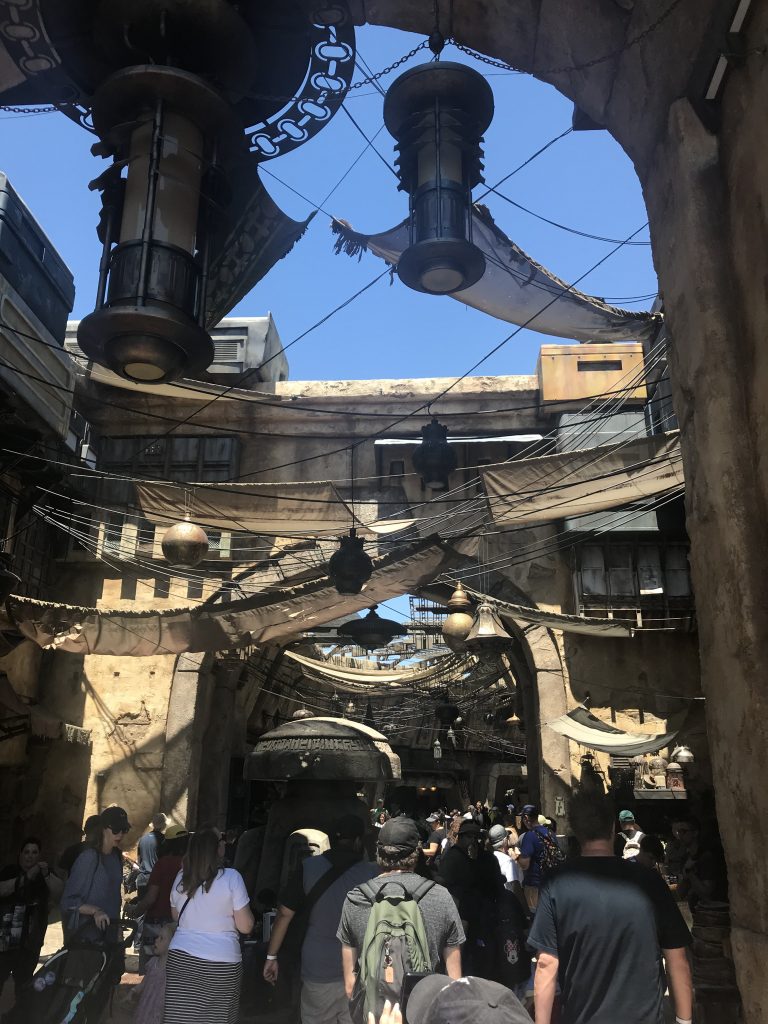 This is not the bright, shiny, clean universe of the prequel trilogy. This is most certainly “wretched hive of scum and villainy”-type Star Wars.

Those rough edges are present everywhere, from the pod-racing engine acting as the “grill” for Ronto’s Roasters to the loose wires and cables hanging above the marketplace. And there are plenty of easter eggs for diehard fans to find, like the IG unit stowed away in Dok-Ondar’s Den of Antiquities.

It’s not just buildings that evoke this feeling. As you wander around Black Spire Outpost, you’ll inevitably be harassed by stormtroopers and Kylo Ren as they question everyone about rumors the Resistance is nearby. More troopers will peer down from the rooftops.

From the Milk Stand to Oga’s Cantina

Even some aspects of Galaxy’s Edge which other reviewers and bloggers panned clicked for me. I tried both the Blue Milk and Green Milk from the land’s Milk Stand. Blue Milk was by far my favorite of the two; a smoothie-like coconut and rice milk flavored with dragonfruit, pineapple, lime and watermelon, it came off as sweet, but not overpowering, and a refreshing treat for a hot California day.

Green Milk, however, carries a floral taste thanks to its orange blossom flavoring (along with Mandarin orange, passion fruit and grapefruit) that is simply too unusual for most palettes. I would certainly Blue Milk drink again, even if it’s not as good as Butterbeer at Universal.

The crowning achievement of the land also has one of its lowest capacities: Oga’s Cantina. 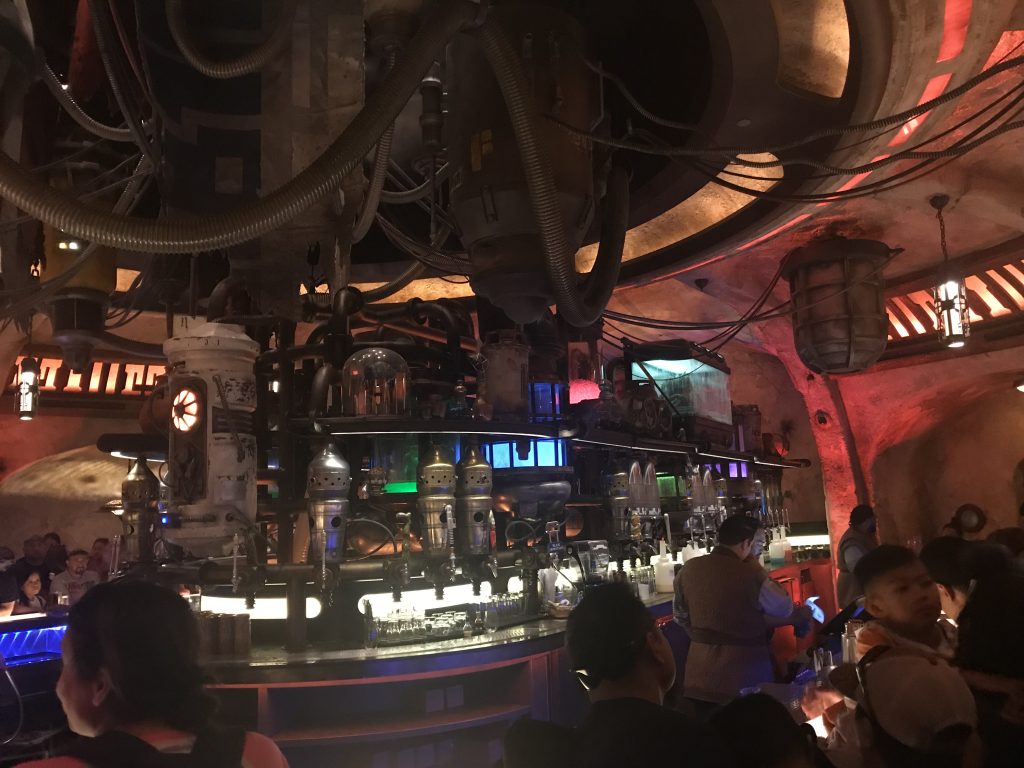 This truly iconic Star Wars setting will draw long lines and waits when it opens in Central Florida, but the experience cannot be missed. From the authentic decor to the excellent drink selection to DJ Rex (yes, the former host of Star Tours, complete with dance moves and shouts of “Turbulence!”), I would have stayed in a booth all day if Disney wasn’t pushing guests out to keep lines moving.

As for the menu, I’d recommend the Fuzzy Tauntaun, a concoction with peach vodka and schnapps topped with foam that temporarily numbs your lips and tongue.

None of this excuses the disappointing Millennium Falcon: Smuggler’s Run, which I reviewed separately, but I can honestly only pick out minor criticisms for the land as a whole.

One is the lack of kinetics. While you’ll hear plenty of activity to evoke the feel of a galactic outpost — like ships taking off and landing — you won’t actually see any of it. That’s perfectly understandable, but the energy of Black Spire Outpost would be that much livelier if it had a PeopleMover-like attraction whizzing around. 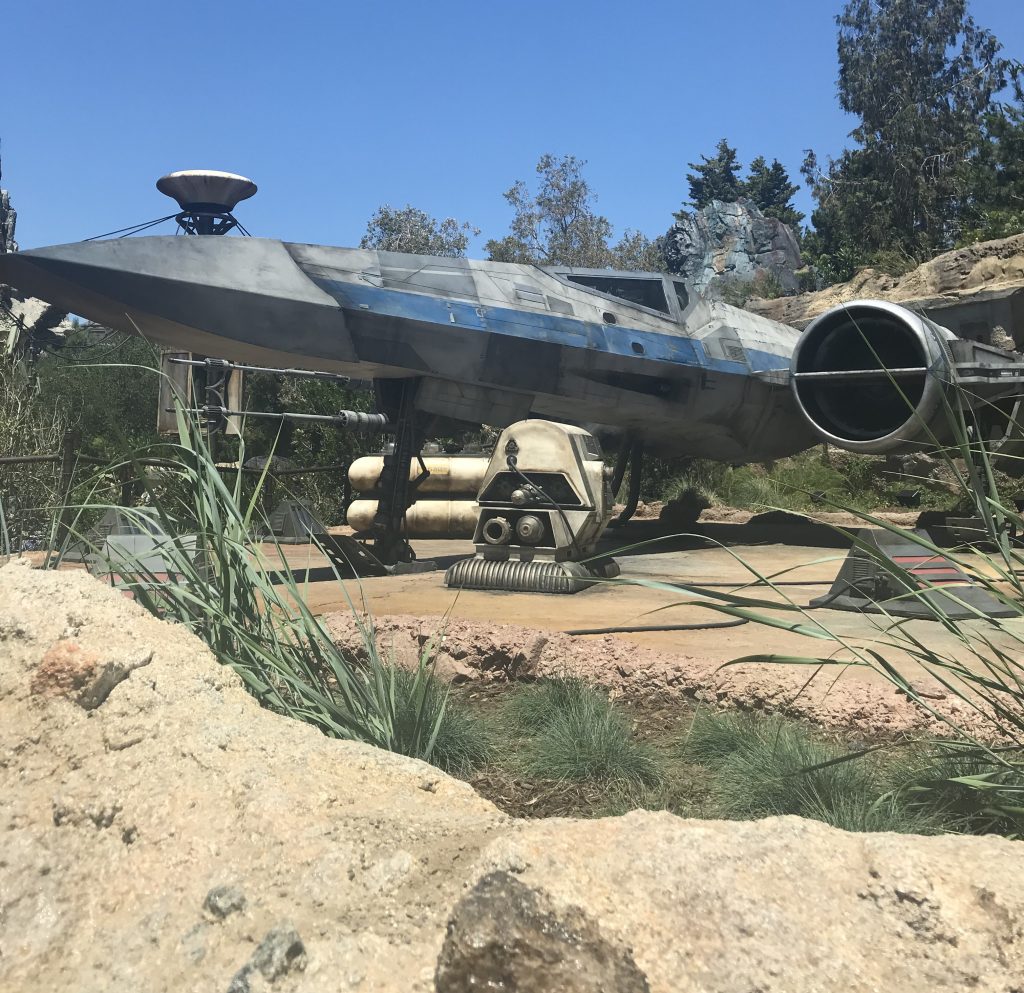 An X-Wing parked in the Resistance forest (Orlando Rising)

Movement or activity of any kind would be welcome on the Resistance Forest side of Galaxy’s Edge. Since Disney opted to open the land without Rise of the Resistance, there will be little reason for guests to linger here. The Rey and Chewbacca characters walking around are a fantastic touch, with interactions feeling much more spontaneous and natural than your typical Disney meet-and-greet photo session, but once you’ve seen them and quickly browsed the sparse Resistance merchandise kiosks (why not a full store, Disney?), you’ll realize the action is largely confined to Black Spire Outpost.

The Boy Who Lived

The Disney blogosphere hype machine has been stuck in hyperdrive for years over Galaxy’s Edge. The very announcement of these lands in Disneyland and Disney’s Hollywood Studios led Disney media personalities like Pete Werner of The DIS Unplugged to prematurely declare that “the competition between Disney and Universal in Orlando is over.”

Let me be clear about this: Galaxy’s Edge is spectacular, but it won’t suddenly kill off Universal and its remarkable success with the Wizarding World of Harry Potter.

The experiences that are available in Batuu have such close analogues to what Universal offers in the Wizarding World that Disney inevitably comes off as the follower, not the leader, in the contest of immersive theme park lands. The Savi’s Workshop lightsaber experience and the Droid Depot are clearly a response to the wand experience at Ollivanders. Blue and Green Milk are Disney’s attempts at replicating the cash-printing machine that is Butterbeer. The marketplace section can even be compared to the whole of Diagon Alley, which set the standard for making shopping feel equal to any theme park attraction.

Disney certainly improved on certain aspects, enhancing the feeling of immersion with animatronics like Dok-Ondar or the real stormtroopers peering down from above the shops at guests. But the evolution from the Wizarding World to Galaxy’s Edge feels more like upgrading to the next model of iPhone than, say, replacing a horse-drawn carriage with a car.

It’s a step forward, not a leap. Perhaps Rise of the Resistance, dubbed the largest ride Disney has ever built with a vehicle, will change my mind when it opens later this year in both Disneyland and Disney’s Hollywood Studios.