History can be a charming attribute for any theme park, but in the case of Six Flags Great Escape, it’s not nearly enough to hide many glaring flaws. 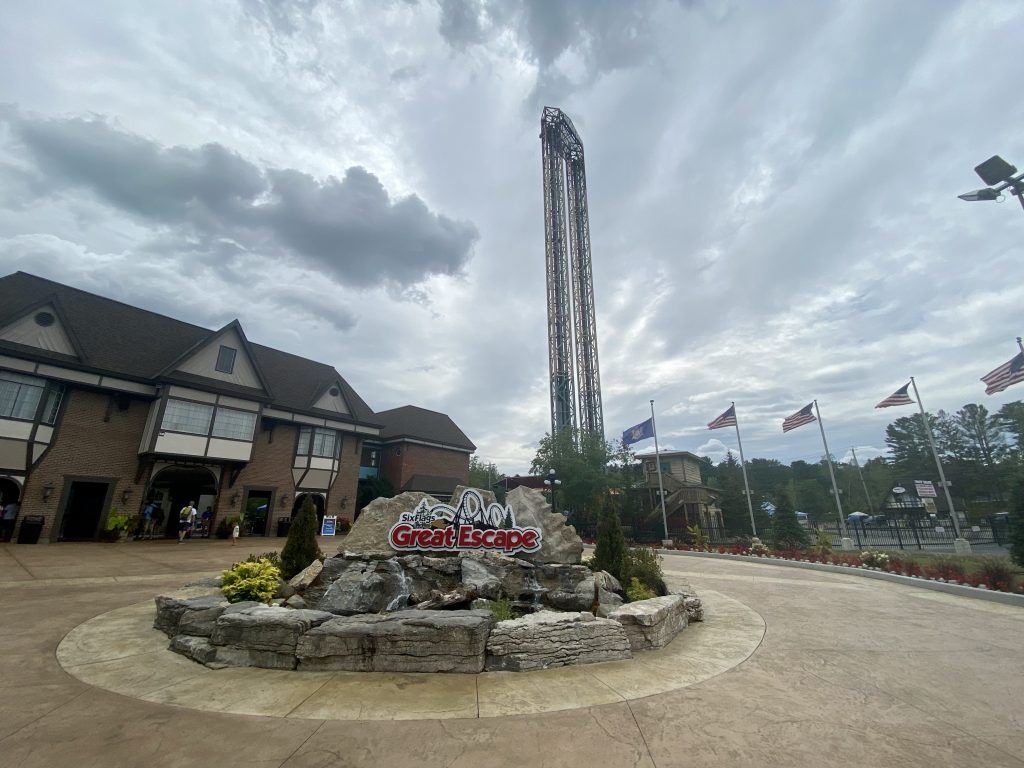 Located in Queensbury, New York, the park was founded in 1954 as a roadside children’s park themed around Mother Goose fairy tales called Storytown USA. What’s been added since it became part of the Six Flags chain in the late 1990s, however, doesn’t do much to justify a trip here, unless you happen to live in the relatively small Albany, New York market and have no closer option. 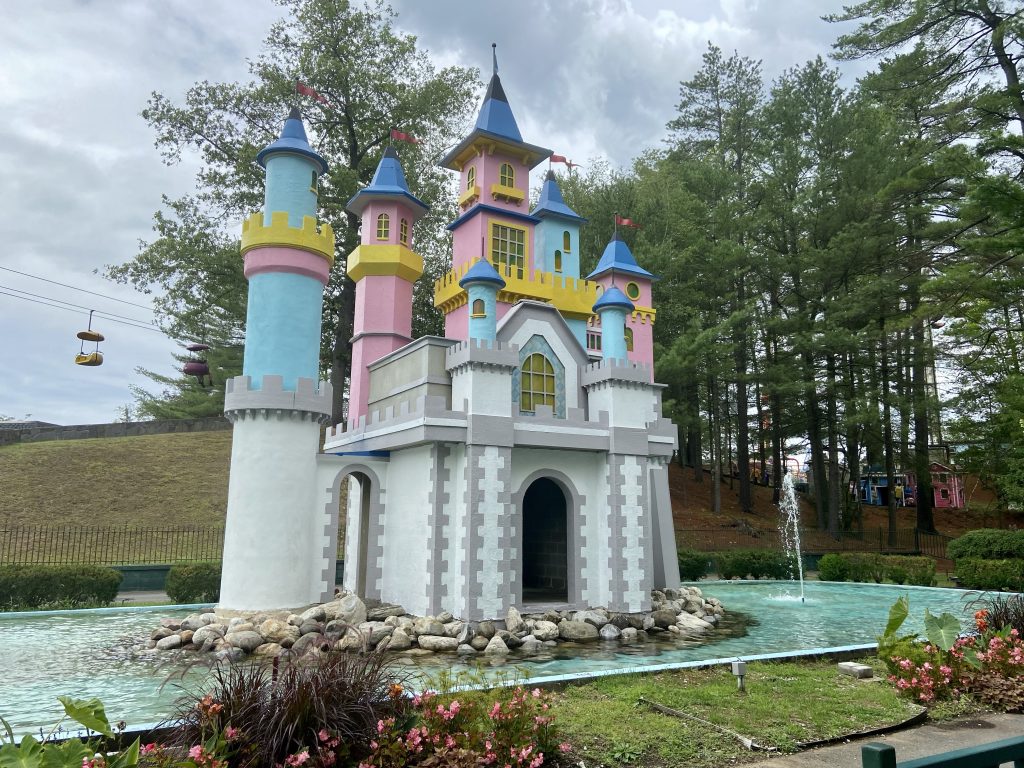 One of the fairytale touches at Great Escape (Theme Park Tribune)

I gave the park a chance in August 2022 only because I happened to be in the area for a family wedding. I never miss an opportunity to grab new coaster credits. My experience may vary from yours, but I didn’t find any good reason to return until the park adds something — anything! — of significance to its thin coaster roster.

Like any Six Flags park, coasters are the major draw here. Too bad Great Escape’s lineup is small, lacking in quality, and not fully operational during my short trip.

Few would argue that the best of the bunch is Comet. Designed by the legendary Herbert Schmeck for the Philadelphia Toboggan Company, Comet opened in 1948 at Crystal Beach Park in Ontario, Canada. After that park shuttered in 1989, it was moved and reassembled at Great Escape and reopened in 1994. 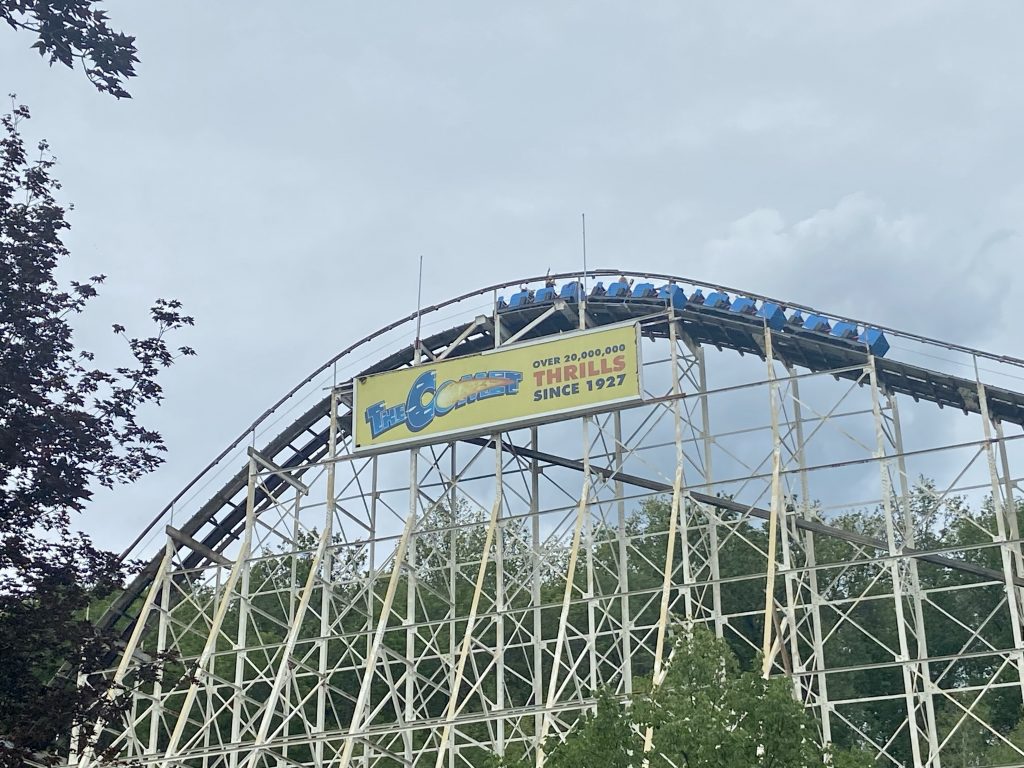 I had high hopes for Comet, with its 87-foot drop, 55 miles-per-hour top speed and its nearly 4,200 feet of track. To my surprise, it didn’t feel that rough — perhaps credited to the fact that a steel framework holds up the wooden track — but the trains’ restraints were uncomfortable and the ride lacked any noticeable airtime, even in the last row. It still should be the top priority for any Great Escape visitor, though be warned you’ll have to walk through the Hurricane Harbor water park to find it.

The rest of the lineup was even less impressive. Steamin’ Demon is a typical Arrow looper model of its era, featuring a drop into a loop and two corkscrews. It’s short, rough and boring. 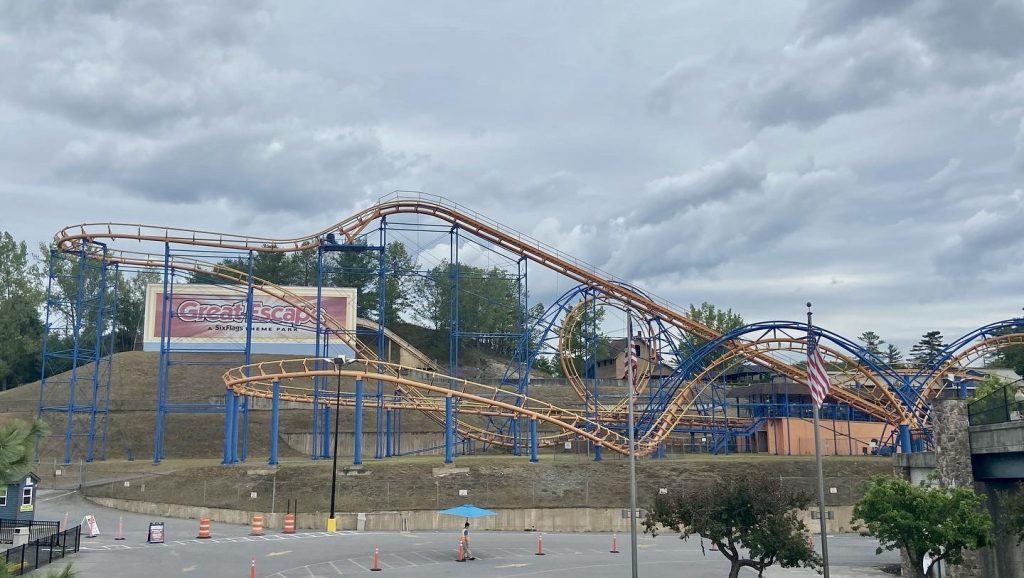 The same could be said of Flashback, a Vekoma Boomerang that opened in 1997. We’re mercifully past the era when every amusement park seemed to have this model, because if you’ve ridden one Boomerang, you’ve ridden them all, and you really don’t want to force yourself to do it again.

The park’s newest coaster is from 2005, a Zamperla kiddie model called Frankie’s Mine Train. Adults can’t ride this one without a child, but at least I got to admire the small bit of theming around the two helixes. 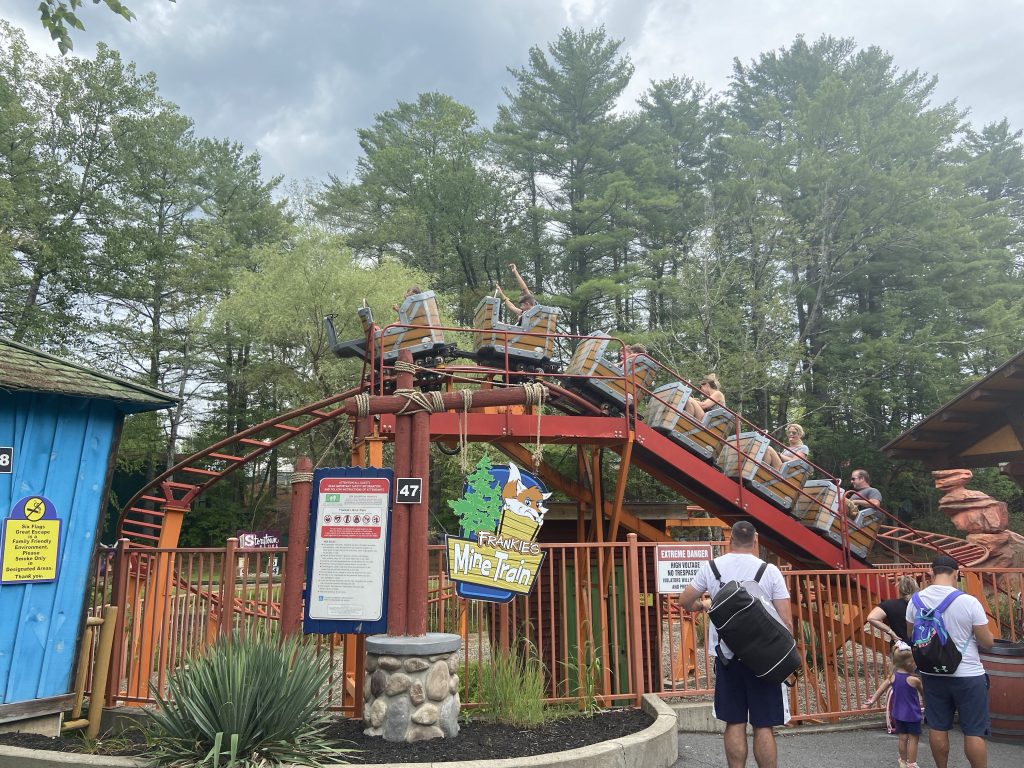 I got only three coaster credits from my trip. Alpine Bobsled was down for the season during my visit, supposedly due to a replacement part delayed by the ever-so-common supply chain issues. I’ve never gotten the pleasure of riding an Intamin bobsled coaster, and it’s a shame I missed this one — it happens to be a former resident of my home park, Six Flags Great America. 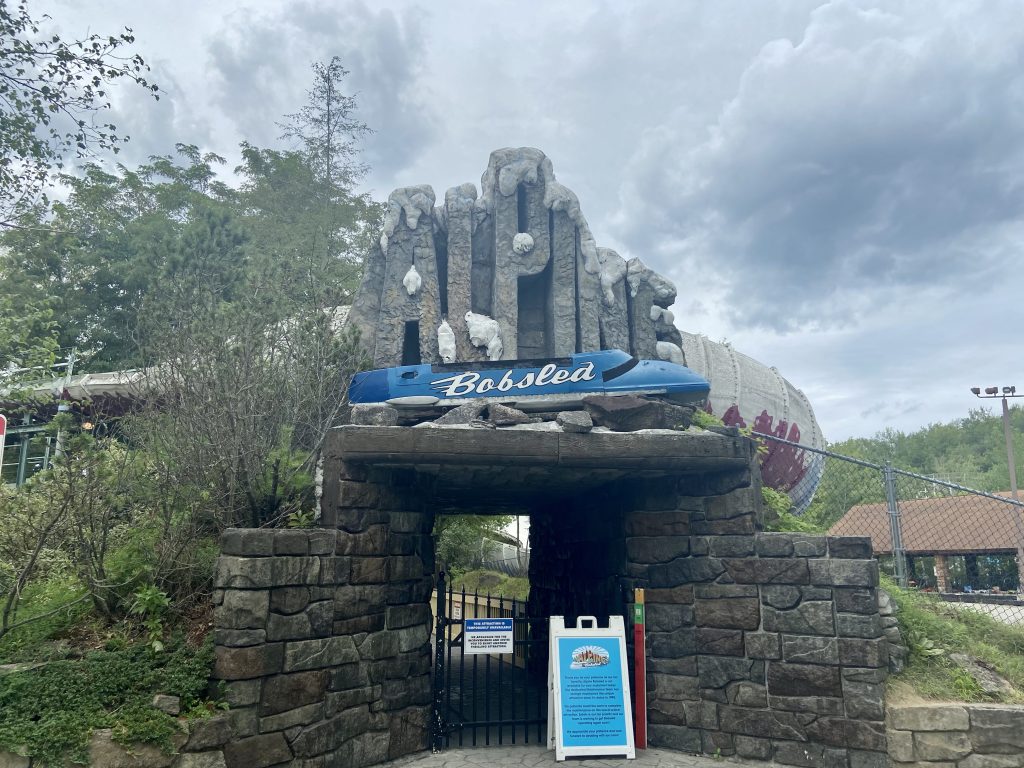 Closed, but that is a great entrance sign (Theme Park Tribune)

Canyon Blaster, a relocated Arrow Dynamics mine train coaster, never opened during my visit, despite the Six Flags app consistently listing it at a five-minute wait all day. Arrow mine trains are never my favorite, but with so few coasters to begin with, it’s never a great feeling when you leave a park with missing credits.

None of this was the fault of Great Escape employees. For the coasters that were open, all the ride operators were kind and pushing through guests as quickly as possible.

One distinctive feature of Great Escape is what’s left of the old Storytown USA attractions, which shows the park’s appeal to families with younger kids.

These large displays (some of which you can enter, though keep in mind they’re kid-sized) include the “Three Little Kittens” from the Mother Goose poem, Little Red Riding Hood, and a giant pink whale that is confusingly labeled as Moby Dick, a famously white whale. 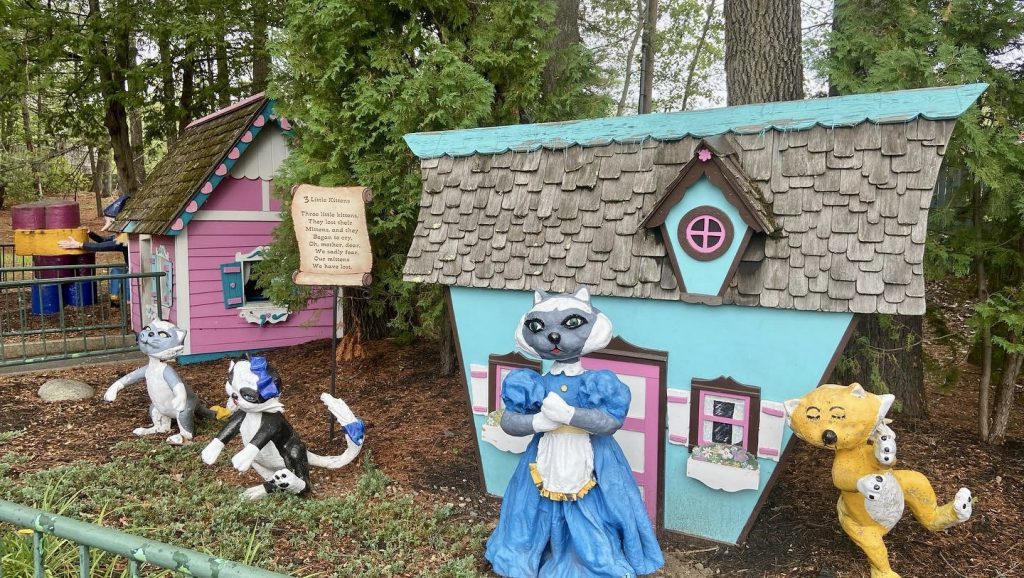 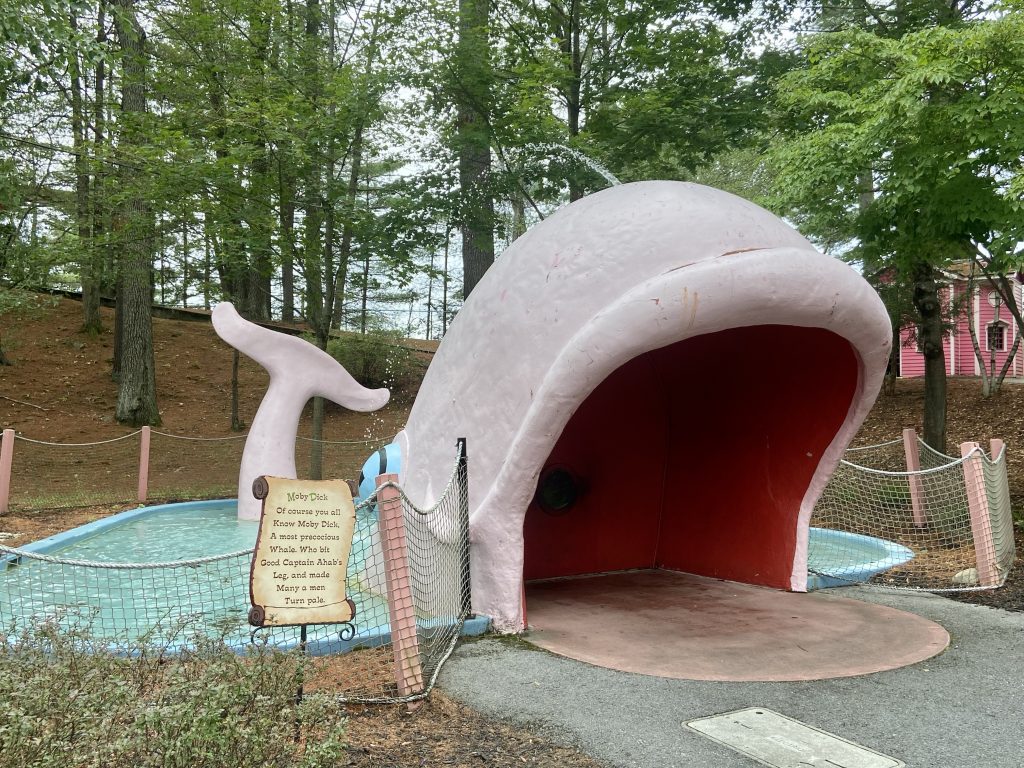 An Alice in Wonderland walkthrough is the most extensive of the old Storytown offerings. 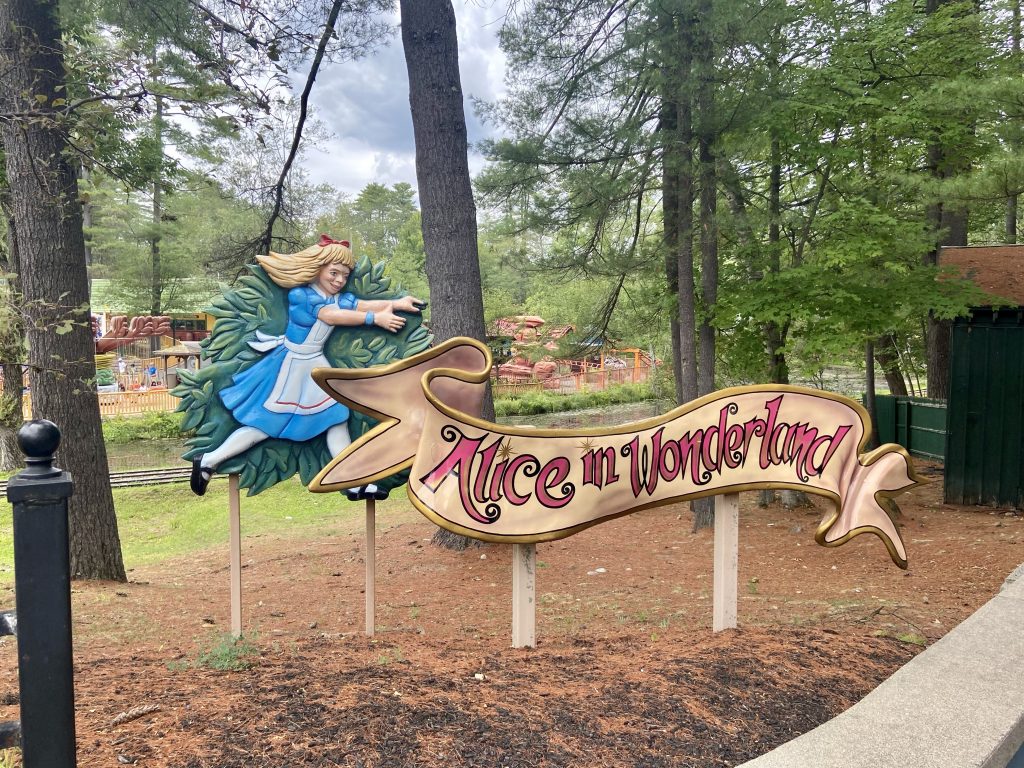 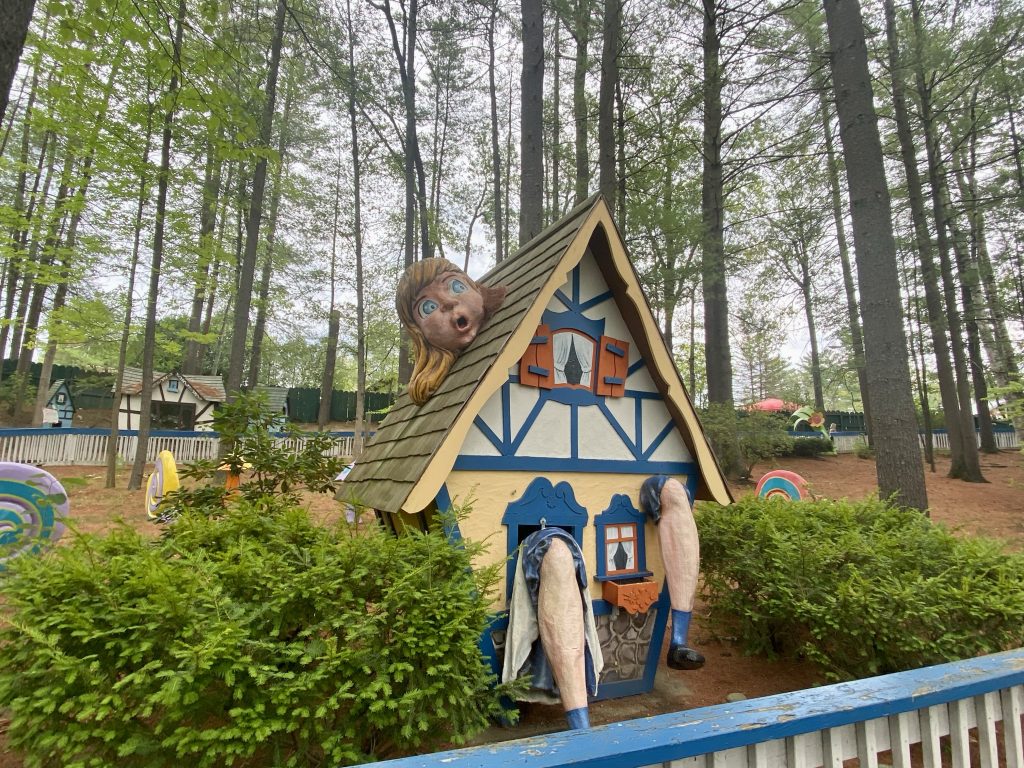 This is terrifying (Theme Park Tribune)

Sure, some of these figures are pure nightmare fuel — there’s an idea for a Fright Fest attraction! — but at least it’s something different and offers a nostalgic trip back to a bygone area of theme parks. 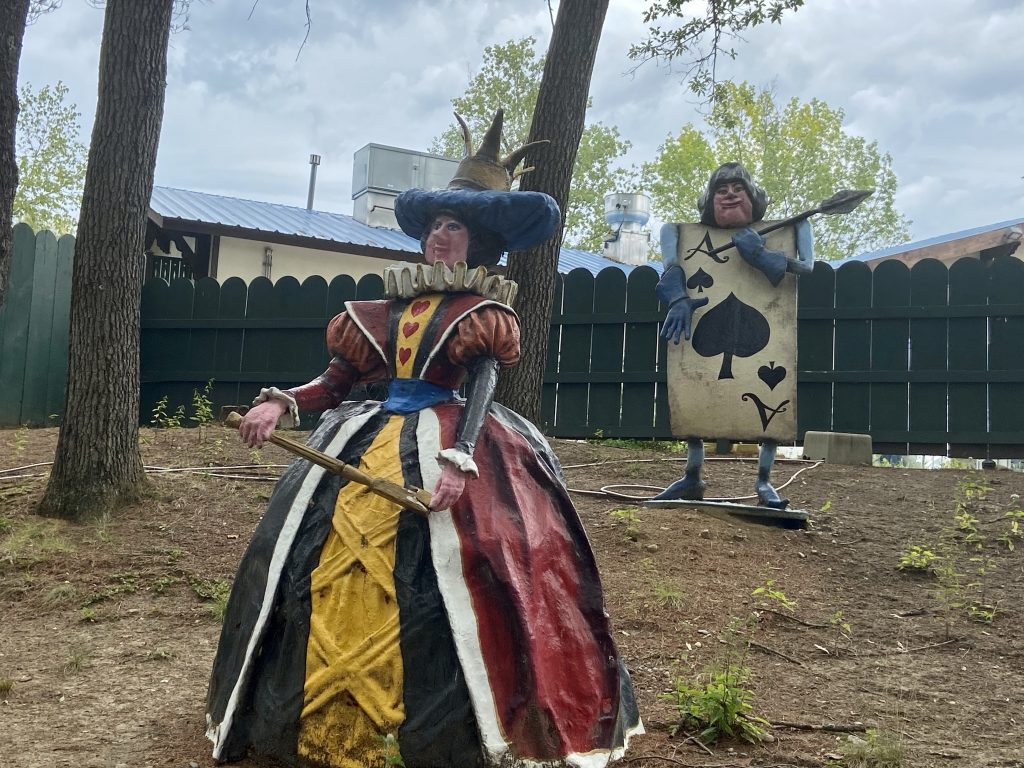 Can someone clean off the Queen of Hearts please? (Theme Park Tribune) 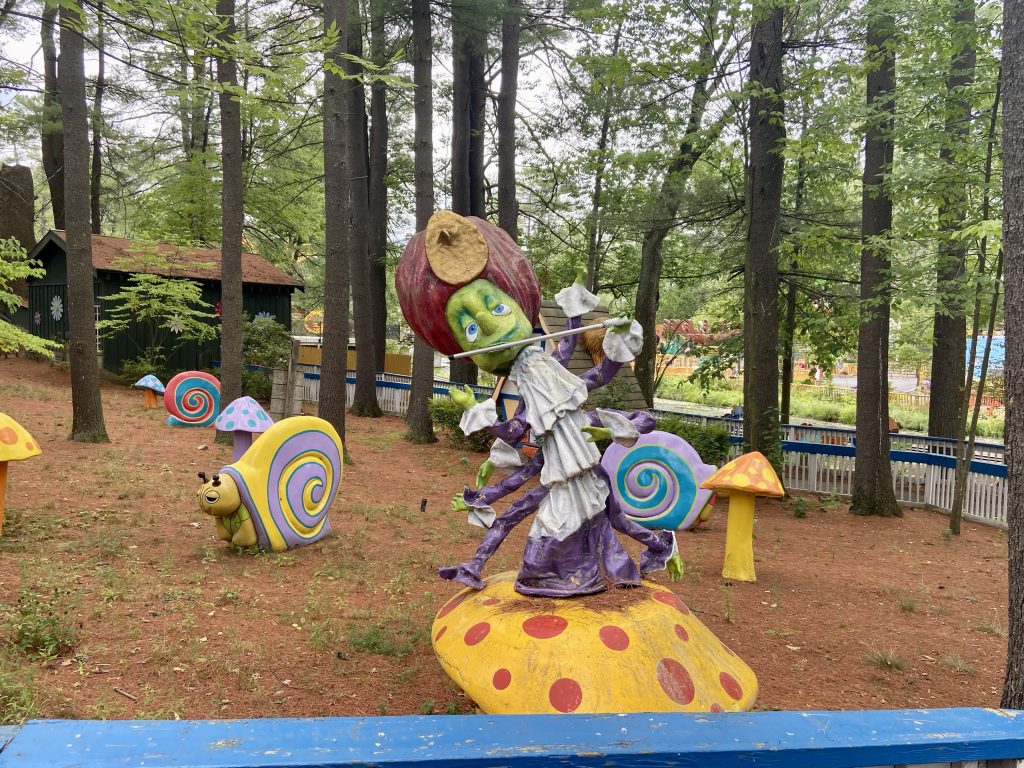 This figure could use some sweeping (Theme Park Tribune)

All of this charm is diminished, however, by a lack of maintenance. Many of the figures looked like they hadn’t been cleaned since the offseason and had chipped or faded paint. To me, that holds back these fairytale settings to being mere curiosities rather than something more notable and enjoyable. 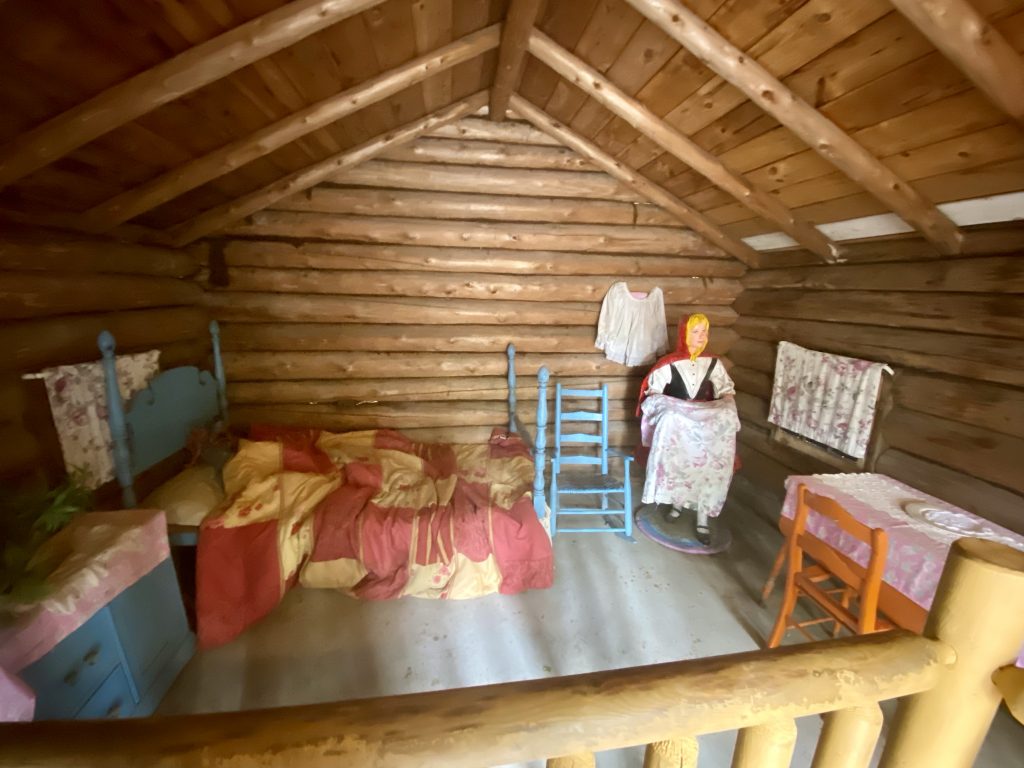 To its credit, Great Escape also features several transportation rides. The Storytown Train rides along the same river used by the Swan Boats (which weren’t during my visit) and past a few more fairytale scenes and a few props themed to the park’s second land, the western-themed Ghost Town.

The Sky Ride will give you an elevated view of the park, though it operates as a continuous loop rather than having two separate entry/exit points, so it won’t save you any walking. Neither of these attractions were all that impressive either — Storytown Train has only a handful of figures  — but provides some variety in the ride lineup.

Beyond the fairytale elements, the park has the typical Six Flags selection of flat rides, the standout being the 164-foot-tall Adirondack Outlaw ride right next to Steamin’ Demon. 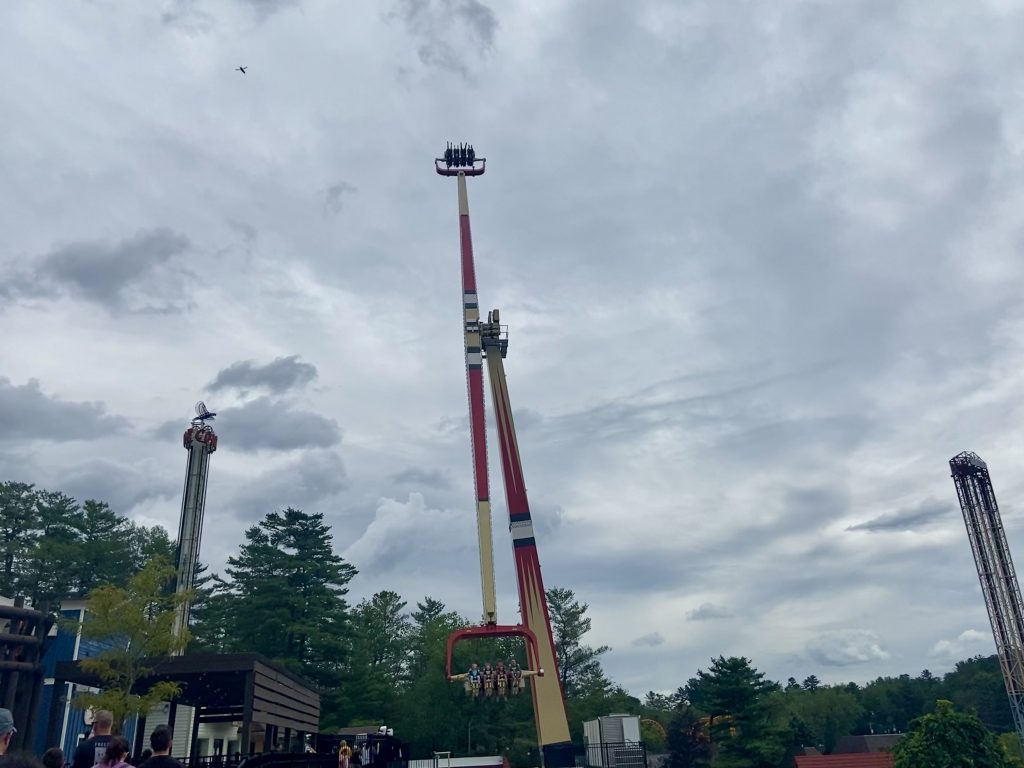 Called a Vomatron, this attraction was added for the 2021 season and is one of only two of its kind in the Six Flags chain. It’s an impressive sight coming into the park and a genuinely thrilling flat ride with flips and positive G-forces along with the great view. The major downside is its low capacity and cumbersome, slow loading times, so I’d recommend hitting it first thing in the morning, even before any of the coasters.

This is an easy one for Great Escape, as the park really needs a thrilling coaster that wasn’t built in the 20th century.

The park’s coaster lineup is small, old and almost entirely made up of relocated rides (only Boomerang and Frankie’s Mine Train have been here for their entire lifespan). Even locals have to be getting tired of this same coaster selection year after year, right?

I’m not expecting an expensive giga coaster on Intamin launch coaster, but any modern and thrilling coaster would be an improvement. Heck, if you took one of the few remaining stand-up coasters from another Six Flags park and moved it here, it would probably be the most popular ride in the park — and that’s despite stand-up coasters being uniformly awful, in my opinion.

What needs to go

It’s hard to recommend that a park with only six coasters get rid of any of them, but if Great Escape had to dump something, it should be Flashback. 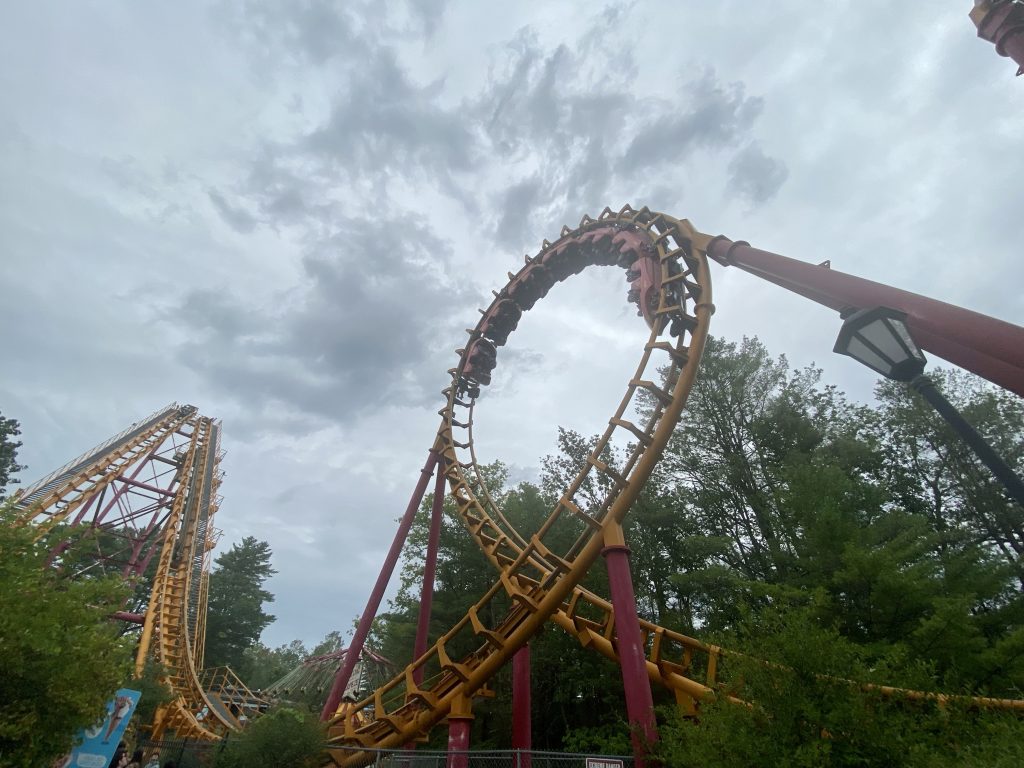 Vekoma Boomerangs are a dying breed for good reason and there are much better choices for compact thrill coasters. Even a Joker FreeSpin clone would be an upgrade.

Great Escape has a few plusses, such as a lovely setting, one historic coaster and a visible connection to its past that stands out from other Six Flags parks. It’s clearly geared towards satisfying the family market in the region. 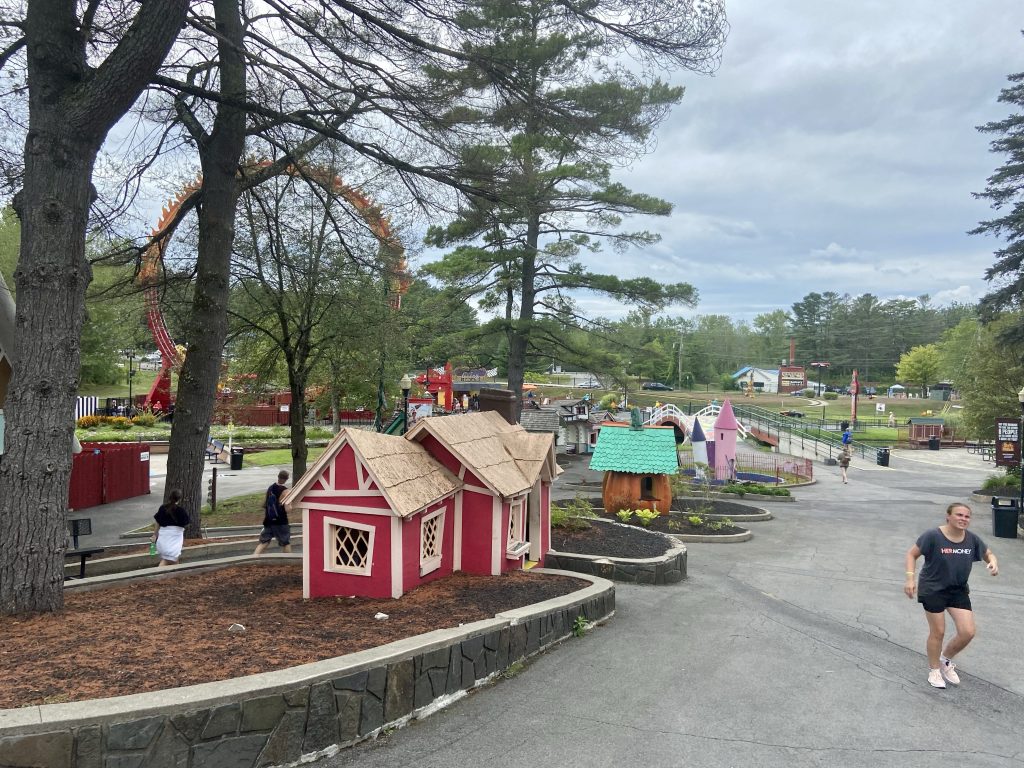 At least the crowds were low (Theme Park Tribune)

That’s a nice way of saying there’s no good reason for the vast majority of people to seek out this park. There are no standout coasters and the lack of investment in the park is obvious. By serving such a minor market, there’s not much reason for Six Flags to bring anything major here either.

For coaster enthusiasts hunting for credits, I’d only recommend a brief stop here to ride all the available credits once, maybe on your way to Six Flags New England. Even then, you’ll be lucky to find all of them operating.