Not every theme park has an on-site hotel — and I honestly thought Universal Studios Hollywood was among those that didn’t.

Turns out I was wrong. Universal City actually has two four-star hotels, one of which is the  Sheraton Universal, which I booked in September 2021 for a $185 night through a Priceline Express deal.

Nicknamed the “Hotel of the Stars,” the 20-story building dates back to 1969, when Universal Hollywood’s appeal was based almost entirely on its studio tour, rather than a full-fledged theme park. The stylistic appeal of a bygone Tinseltown era is still there in the common areas of Sheraton Universal, with vintage photos of old Hollywood stars and touches of mid-20th century elegance. 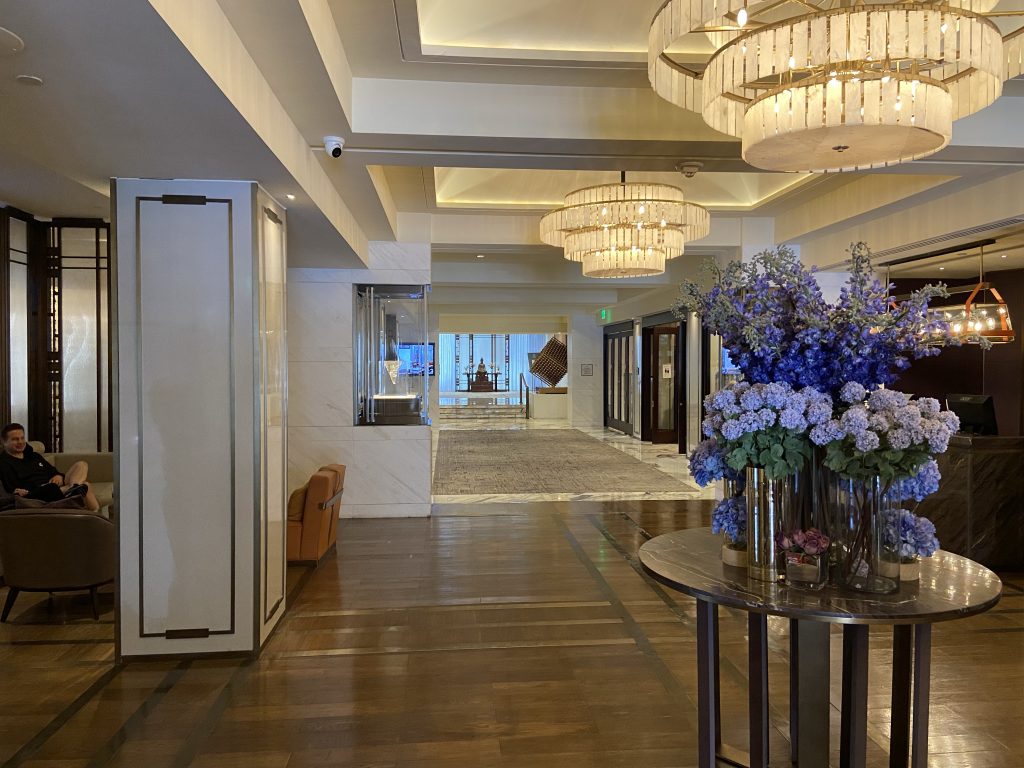 Inside the lobby (Theme Park Tribune) 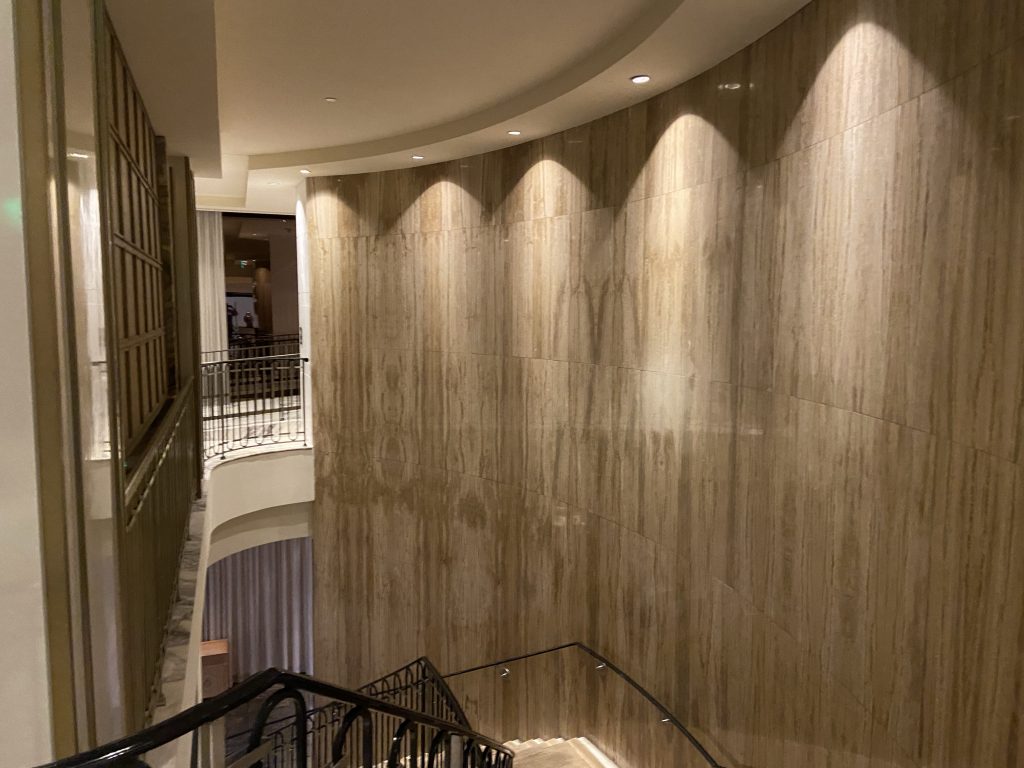 Leading down to the restaurant and pool area (Theme Park Tribune)

Nowadays, it should be balancing its appeal to both theme park guests and business clientele, and I’m not convinced it’s doing so successfully. If you’re reading this review, you’re definitely in a theme park audience, in which case you’ll have to ask yourself this before staying at Sheraton Universal: When going to a theme park that I can easily experience in one day, do I really need to stay on-site?

If you thought the Sheraton Universal’s main audience was theme park guests, one look at their rooms should dispel you of that notion. 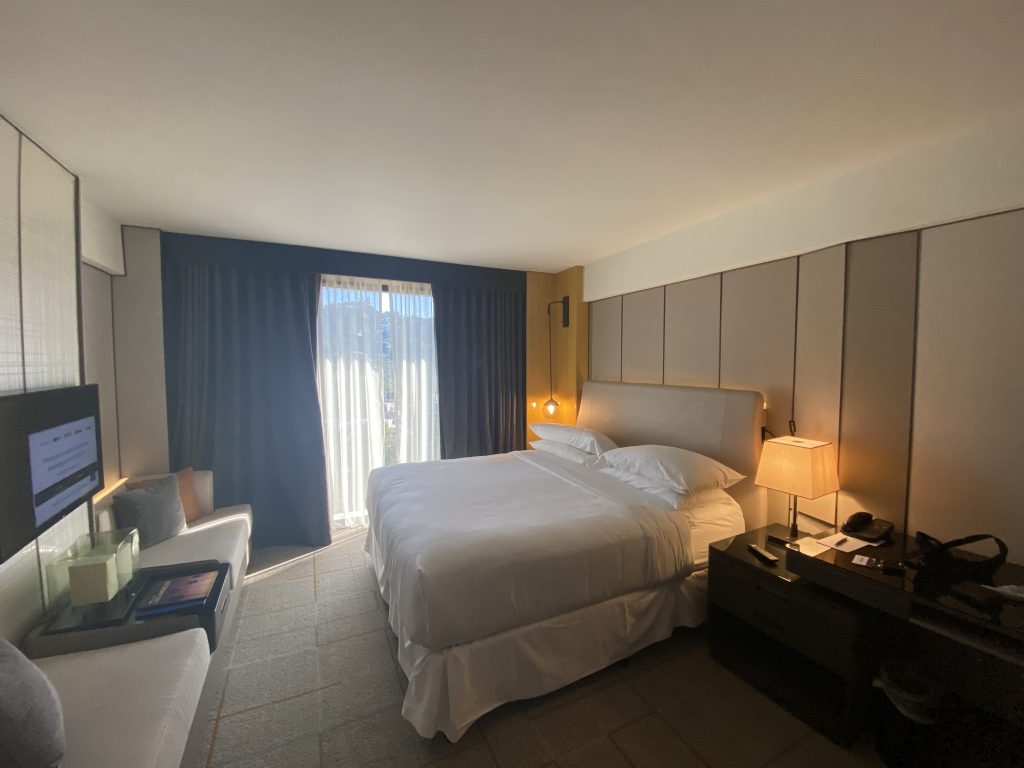 This is the quintessential business hotel look in the 2020s: modern touches on all the furniture and lighting, along with an ample workspace. The only pleasant surprise is they’ve kept the carpet, unlike many other four-star hotels removing it for cheaper (and louder) flooring.

But that doesn’t make up for a shower floor that feels like walking on a grill. See what I mean in my room tour:

Sheraton Universal offers a lobby bar and small bites restaurant, In the Mix, a pool bar called The Reel (only open seasonally), and a full-service restaurant called The California’s (yes, that’s really the name, not some weird grammatical error). 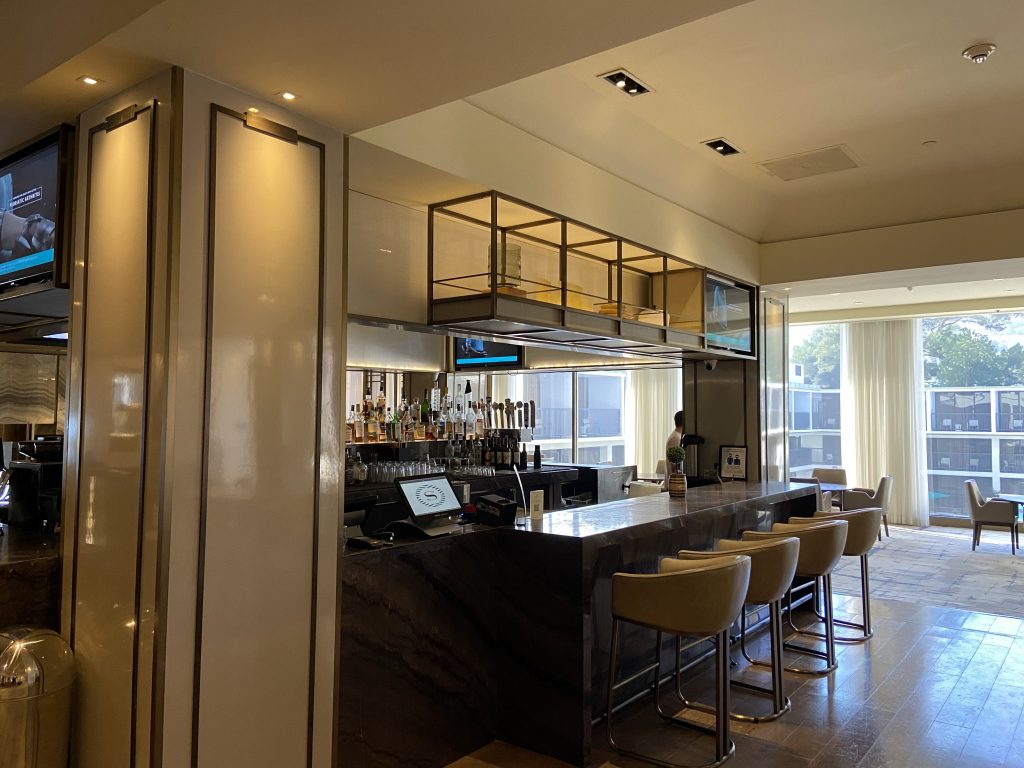 In The Mix at Sheraton Universal (Theme Park Tribune)

Nothing on these menus truly stood out for quality or value, but breakfast options at the theme park and CityWalk are especially limited, so the buffet options — $17 for continental breakfast, $27 for a full, hot breakfast spread with made-to-order waffles and eggs benedict — may appeal to some guests. Even if you’re not looking for a full meal, grabbing your Starbucks coffee at the restaurant will be better than longer lines at CityWalk. 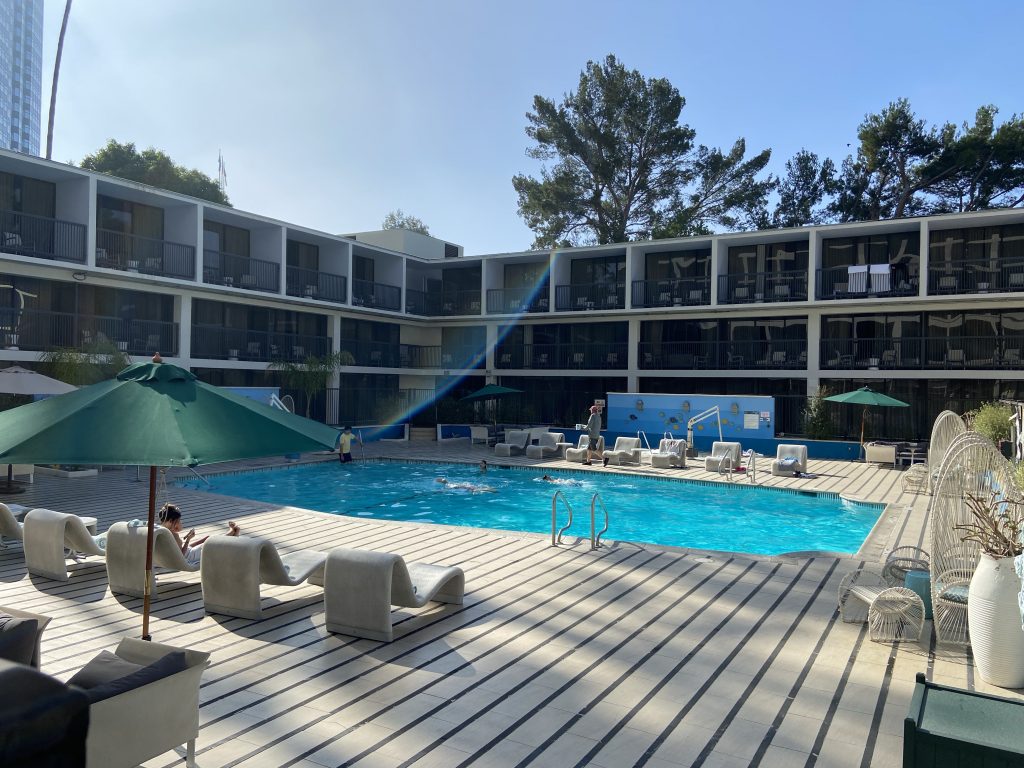 The pool area is more than serviceable, but nothing spectacular compared to other resorts. Its best feature may simply be offering any level of privacy for hotel guests; in Los Angeles, it’s not uncommon for pool areas to be either laughably small or have their serenity drowned out by nearby traffic.

You can also find the typical fitness and business center options. Parking is a steep $32 per night, but keep in mind daily parking rates are $30 at the theme park. 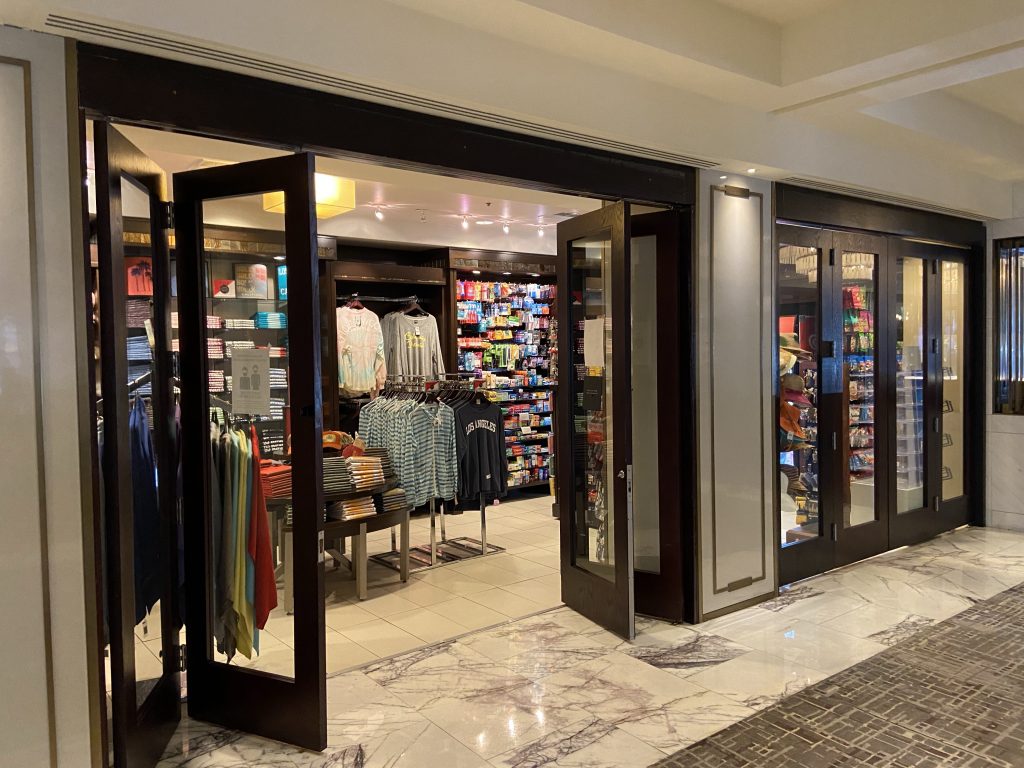 There is a store inside the hotel, but for those who have stayed at Universal Orlando resorts, don’t expect a full-blown Universal Studios Store. You’ll find hotel necessities, snacks and some clothing, but no large selection of Universal gear that makes up for something you missed inside the park.

The most noticeable benefit to staying at Sheraton Universal is its proximity to Universal Hollywood and CityWalk. It’s only a 10- to 15-minute walk to the theme park entrance, but be warned, you’ll have to deal with the very steep incline of Universal Hollywood Drive.

The other option is a complimentary shuttle bus that runs about 20 minutes between the hotel, the neighboring Hilton, and CityWalk. Between the extra stop and the fact that the CityWalk bus stop is located further away from the park entrance than the walking path, the bus option is more about saving steps than time. Pick the one that best suits your needs at that moment; if the bus just arrived, hop on, but if your legs are fresh, go ahead and bear the uphill climb. 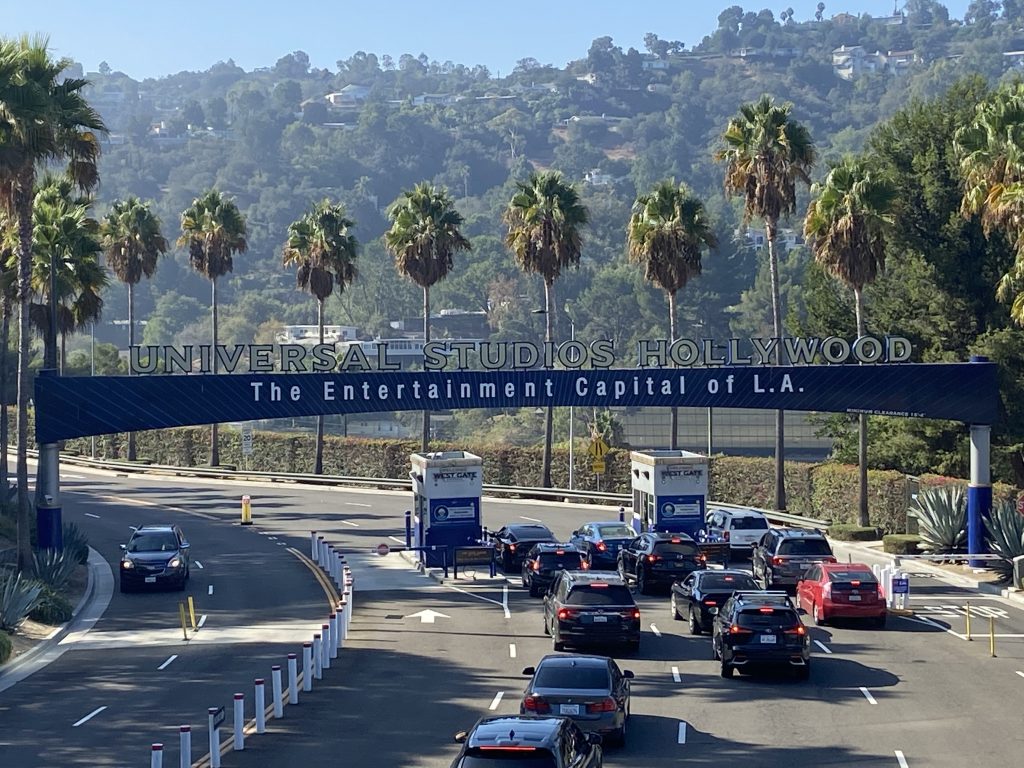 Besides that, however, there are no real perks for on-site guests.

That’s where the value proposition for theme park guests gets a bit iffy. Universal Studios Hollywood is absolutely a one-day experience. Even Universal would admit that, given that it doesn’t sell multi-day tickets, just single-day or an annual pass. Being close to multiple days’ worth of experiences is a big part of what makes staying on-site at a theme park hotel worth it. 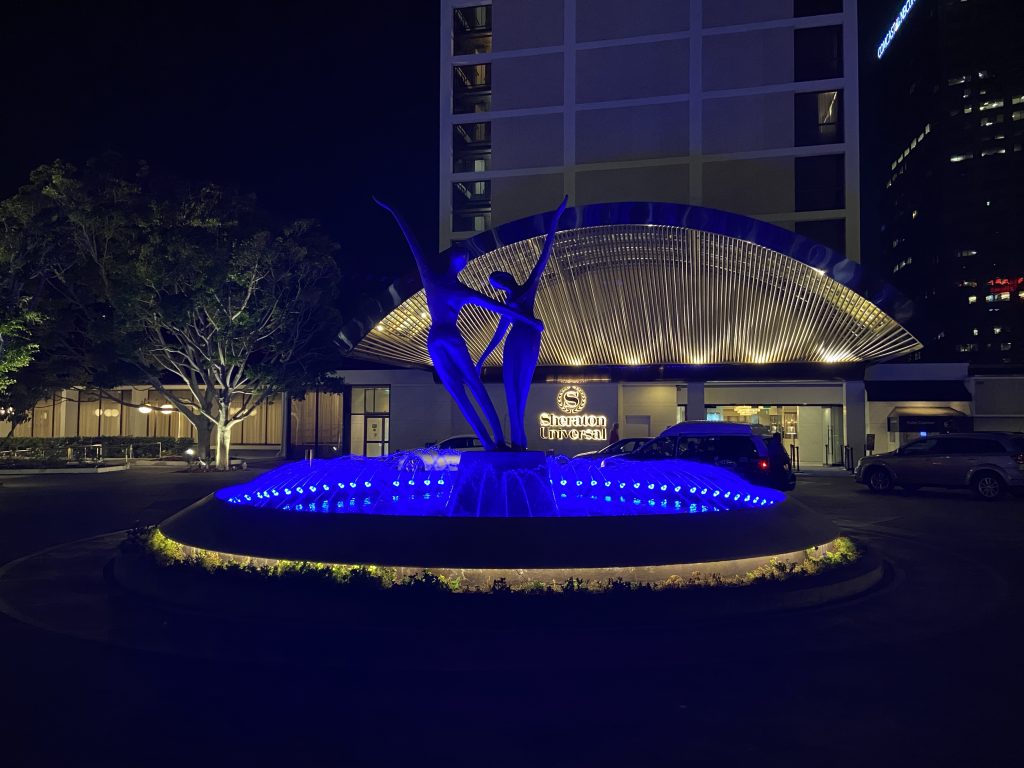 Outside the Sheraton Universal at night (Theme Park Tribune)

An exception to this would be if you’re going to Hollywood’s Halloween Horror Nights. That event often lasts beyond midnight, so being in close proximity to your bed for the night was a much greater appeal. Is that alone worth $200 a night? Maybe not, but the drunken HHN version of yourself may appreciate it.

Sheraton Universal is a hard hotel to judge. Its biggest perks revolve around proximity to a park where an overnight stay is hardly necessary, and its other amenities don’t particularly stand out among other theme park hotels in its class.

However, I can make a case for it as part of a larger vacation that just happens to include a theme park, rather than a dedicated theme park vacation.

Having traveled to Los Angeles multiple times for both work and fun, I’ve seen wild variation in the quality of hotel options. Finding reliable accommodations in a decent location that offer ample (if paid) parking can be tricky, especially for first-time visitors. If you plan on making Universal Studios Hollywood part of your L.A. vacation, Sheraton Universal is a safe bet for a comfortable stay beyond your one day inside the theme park. You can make it your home base while mixing in other tourist attractions like the Warner Bros. Studio, the Hollywood Bowl, or the Hollywood Walk of Fame.

Just bring some flip-flops to wear in the shower. The soles of your feet will thank you.

Editor’s Note: This review is based on my own opinion and perspective. I paid for my own room, using a publicly-available deal from Priceline. The hotel was not aware that I was conducting a review, so I did not receive any special treatment or service.