That’s for good reason. Universal generally has a greater reliance on thrills and thus sports only two traditional dark rides in its U.S. parks: Cat in the Hat and E.T. Adventure in Orlando.

Meanwhile, Disney is now emphasizing trackless dark rides that are grander then their small Fantasyland predecessors. Sometimes that scale is warranted — and sometimes it’s not, where I’m left feeling that the rides didn’t do enough with the trackless technology and killed a better attraction in the process. 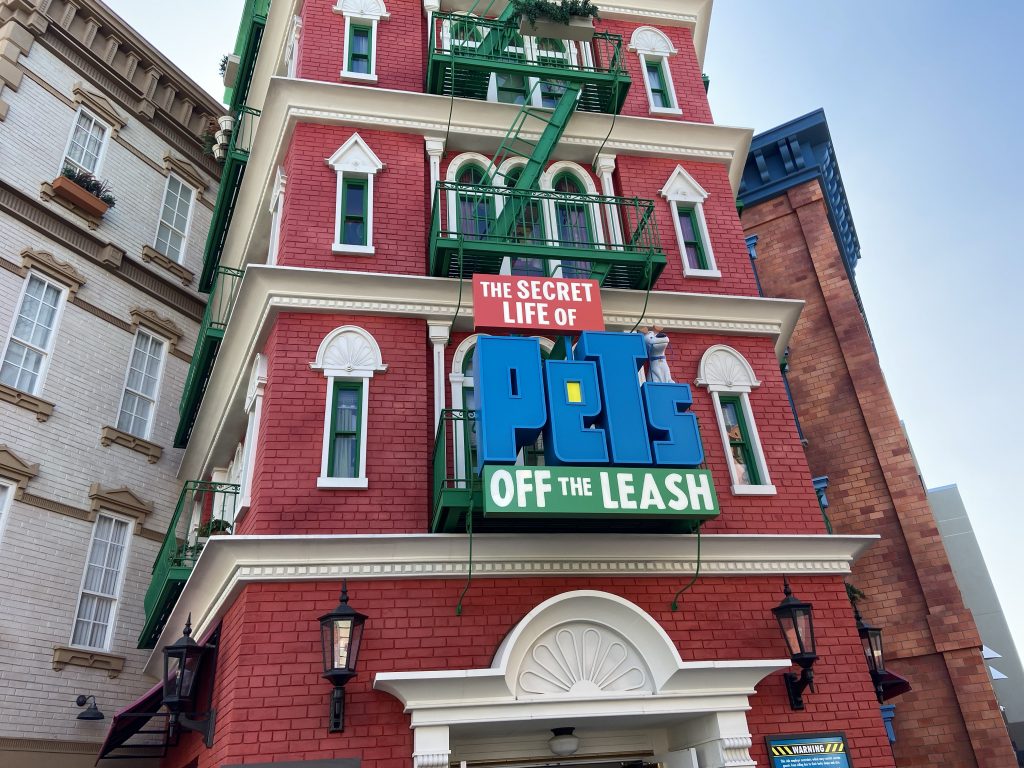 Secret Life of Pets: Off the Leash at Universal Studios Hollywood is the opposite, as it did much more than I would have expected with a smaller space and a well-worn ride system.

After being delayed more than a year thanks to the COVID-19 pandemic (with a few more months passing before I ventured out to the West Coast), the new dark ride turns a simple conceit — stray puppies roaming through New York City — into perhaps Universal’s best traditional dark ride, thanks to detailed physical sets and lots of charm.

One of the ride’s biggest strengths is the queue. Instead of plain switchbacks adorned with a few movie clips, guests meander through the “Pets” apartment complex, with multiple interactive elements, animatronics and character moments. You won’t be able to resist touching every doorknob and looking through every mail slot. 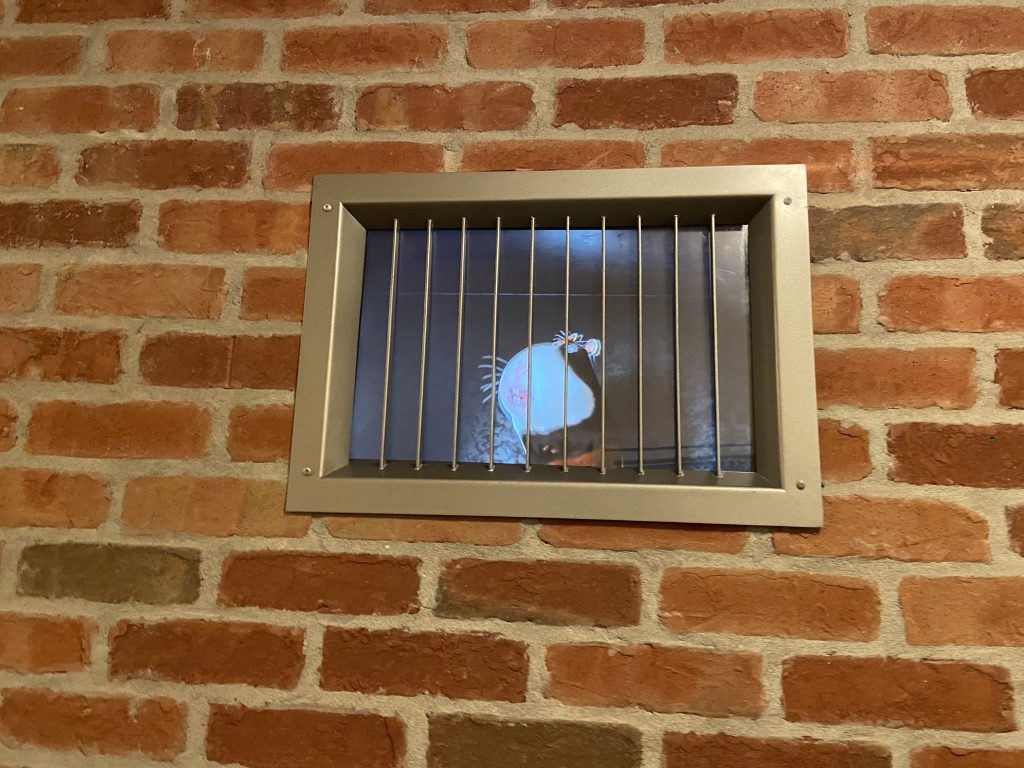 It’s not on the level of Star Wars: Rise of the Resistance in making queue spaces like part of the ride experience rather than a line. That said, it’s about as entertaining of a queue as you can expect, and the best that I’ve seen from Universal. 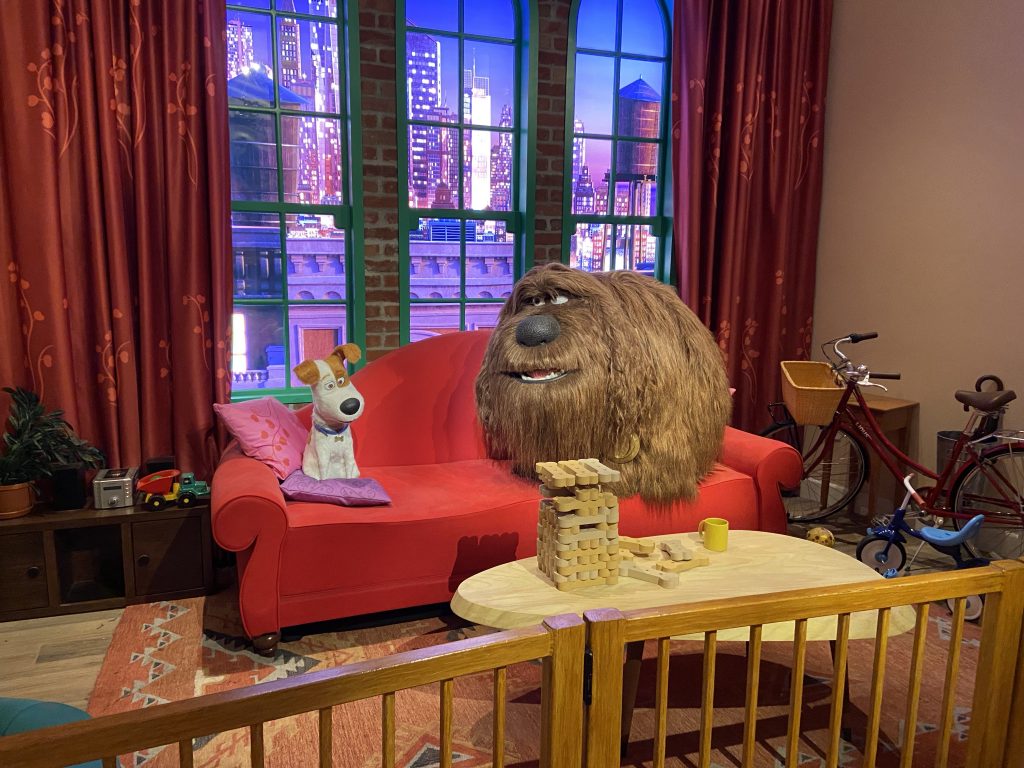 The last two rooms of the queue emphasize the ride’s story: you, the guest, are a collar-less stray puppy looking for their forever home. The “Pets” gang led by Max, Duke, and Snowball are here to get you to an adoption event at The Pets Store (I guess #AdoptDontShop doesn’t exist here?) and surely, nothing will go wrong along the way. It’s a simple premise and one that doesn’t require any knowledge of the two “Pets” movies to appreciate.

After boarding two-seat vehicles that look like cardboard boxes, you’ll see yourself digitally transformed into a puppy. Yes, it’s a screen-based trick, but the rest of the ride clearly shows Universal has learned its lesson on relying too heavily on screens. 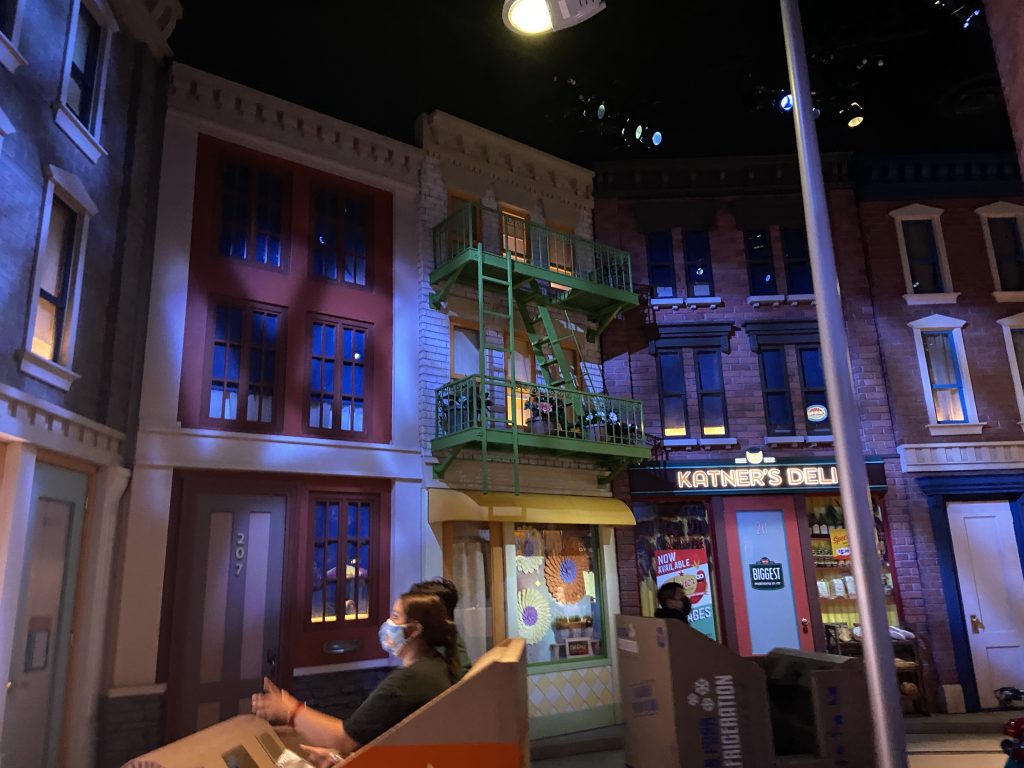 On the ride (Theme Park Tribune)

Without overanalyzing every scene, there is a clear emphasis on practical sets, figures and animatronics (reportedly 64 in total). Like the best Disney dark rides, there is so much packed into these scenes that, once you’ve familiar with the bigger story beats, you’ll want to re-ride to seek out new details. It would be impossible to pick them all out at once.

Being more of a cat person myself, the Alley Cat scene was my favorite. The street cats there reminded me of a dark, twisted version of Disney’s “Aristocats.” 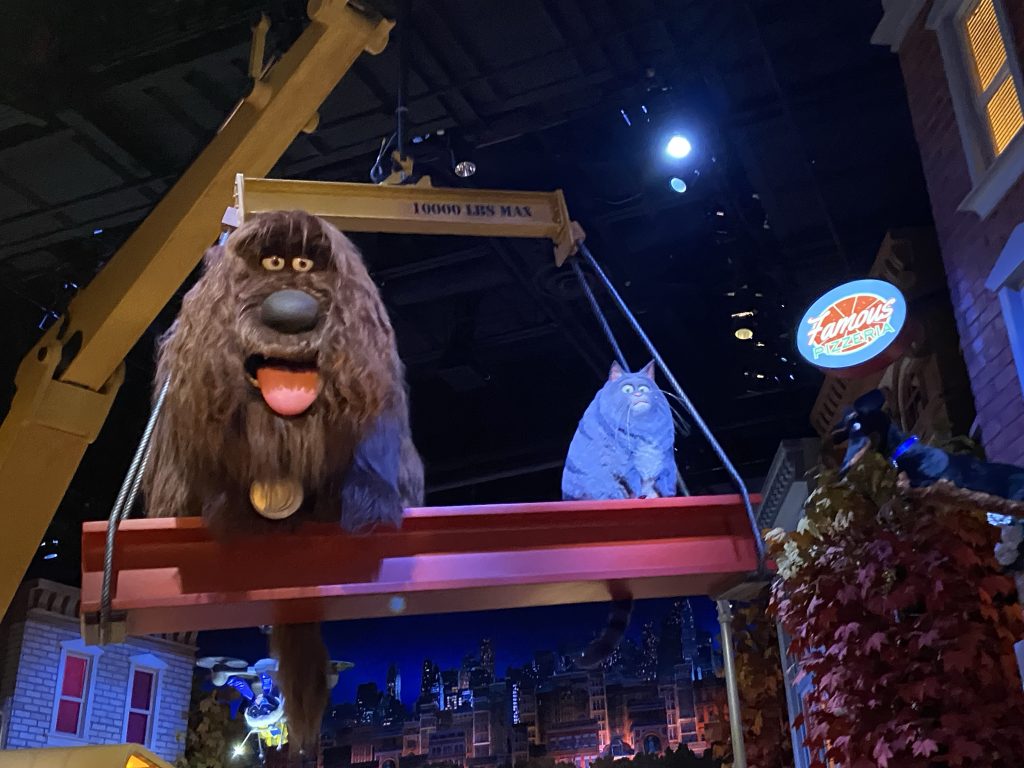 Screens come into play again at the end as Gidget prepares puppies for adoption with some bathing and blow drying, but these screens act in concert with the sets and animatronics, rather than acting as a cheap, easy replacement.

This isn’t some big E-ticket beast, but it’s not trying to be either. It’s a great mid-tier family attraction for Universal Studios Hollywood, adding variety to its lineup and filling the dark ride void that it’s been missing for decades. It would also be a welcome addition to Universal Orlando.

There is one downside to Secret Life of Pets: Off the Leash. For some reason unknown to me (and, judging by online reviews, many other guests), the attraction features restraints that fit in more with a roller coaster than a mild dark ride.

Secret Life of Pets test vehicle. We actually think this lap bar restraint and seat divider is unnecessary for this slow moving dark ride. This restraint makes it seem like we are going on a fast moving ride.🐱🐹🐶🐰 pic.twitter.com/l1Bnxvn81g

This creates an unnecessary hassle for guests. Like most Americans, I’m overweight, and while I didn’t have any major issue fitting with the ride’s restraints, it did feel tighter than it needed to be. Sure, the ride vehicles do turn at times to direct guests’ views towards certain scenes — but Disney’s Haunted Mansion has done that since 1969, and all it needs is a single bar that may not even touch a guest.

Being unfriendly towards larger guests and the disabled, these baffling restraints could wreck the ride experience, and for no good reason. That’s the only thing that knocks down the ride’s final grade.

Unfriendly restraints aside, this attraction shows that you can teach an old dog some new tricks — the old dog in this case being traditional, tracked dark rides.

It also shows just how far Universal Creative has come in just a few years, when it was being (rightfully) panned for eschewing practical sets for too many screens. With Secret Life of Pets: Off the Leash, it beat Disney at its own game.

DISCLOSURE: This review is based on my own opinion and perspective. I paid for my own park tickets. Universal did not grant me any special access to the park or to Secret Life of Pets: Off the Leash to conduct this review.