Two years ago, I would’ve been jumping for joy over the thought of Disney World having three trackless dark rides.

Be careful what you wish for.

Trackless rides, which work by using electronic sensors embedded in the floor and direct ride vehicles based on local positioning systems or wi-fi, had been only a YouTube POV dream of stateside Disney fans since Pooh’s Hunny Hunt debuted in 1998 at Tokyo Disneyland. The next three trackless Disney rides were all built at international parks, while U.S. theme park fans got a small (and underwhelming) taste of the tech with SeaWorld Orlando opening Antarctica: Empire of the Penguin in 2013.

Disney World got its first predominantly trackless ride with Star Wars: Rise of the Resistance, a brilliant, multi-faceted ride where the trackless vehicle is only one element of a grander experience. It’s possibly the greatest attraction Disney has ever constructed.

Then came Mickey and Minnie’s Runaway Railway. Besides failing to top the ride it replaced, Runaway Railway underutilized the trackless technology, too often acting like a more traditional dark ride, except requiring more empty space for vehicles to maneuver. 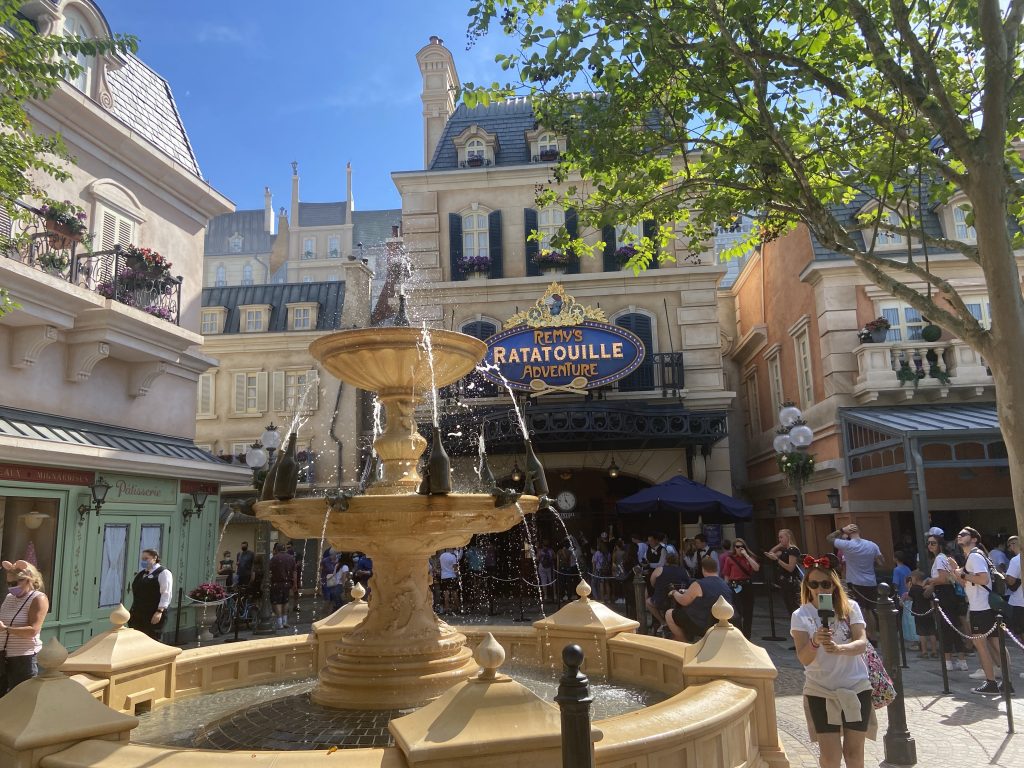 Now, Epcot has its own trackless experience with Remy’s Ratatouille Adventure, a clone of a ride that debuted at Walt Disney Studios Park in Paris in 2014. While it avoids the practical failings of Runaway Railway simply by being an addition, Remy fails to cook up an E-ticket experience worthy of the trackless system — and exposes the system’s flaws.

The queue and ride experience

The entrance area for the ride transforms you from one faux Paris — the more realistic version of the existing France pavilion — to Remy’s Paris, complete with Remy-stamped manhole covers to a storefront dedicated to Anton Ego, the food critic from the 2007 Pixar film. The level of detail makes the whole area feel like a buildup to the attraction, like an extended queue without a line. 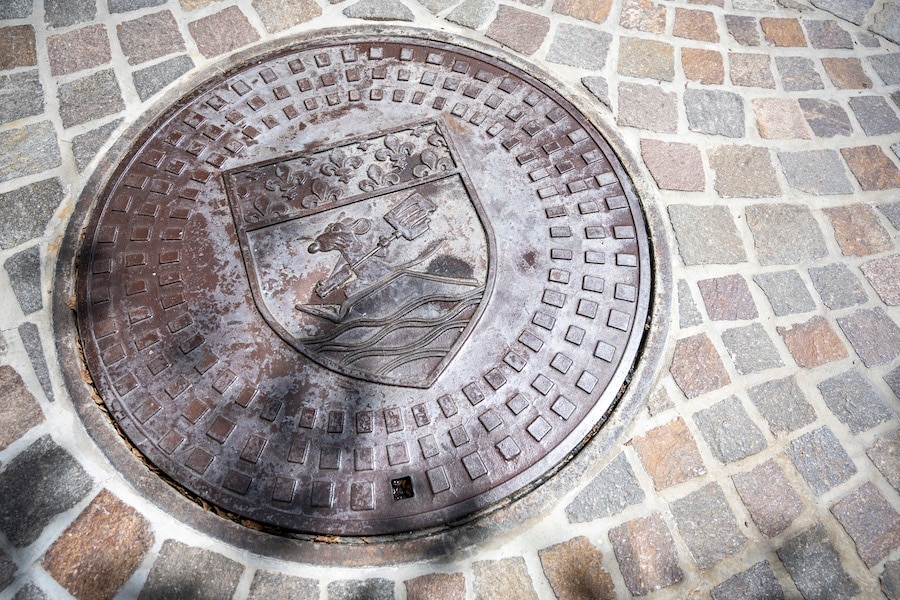 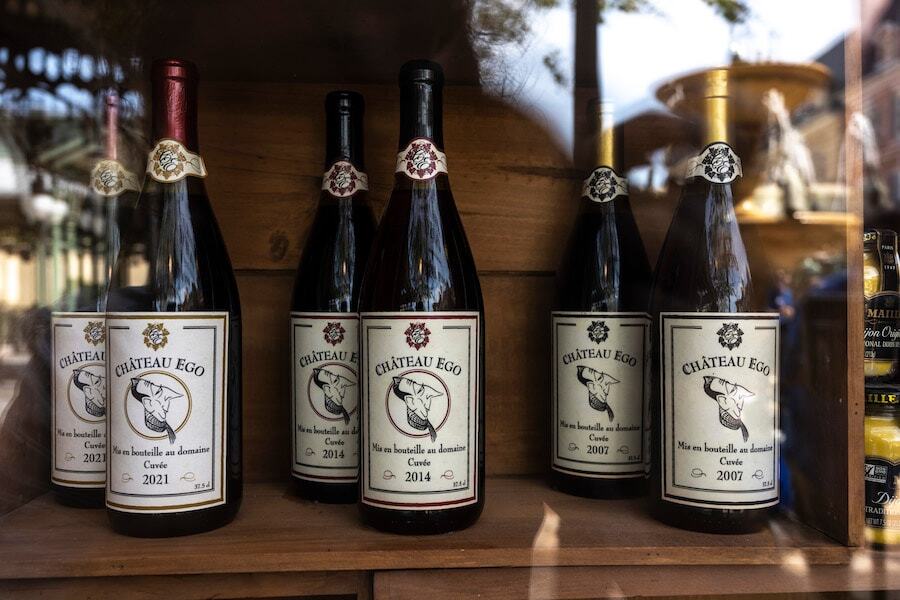 The actual queue is made up largely of switchbacks with some Remy-themed wallpaper until you reach a room on the Paris rooftops, complete with the Gusteau’s sign (which, unlike the one outside the ride, comes to life. It makes me wish there was a little more life in the rest of the interior queue, though the next scene is themed around an artist’s loft, which is exclusive to the Epcot version of the attraction.

With 3D glasses now in hand, you board six-person ride vehicles shaped like rats in an area that continues the rooftops of Paris motif. In another advantage over Runaway Railway, Ratatouille ride vehicles have a motion base on its ride vehicles to distinguish itself from traditional, tracked dark rides. Yet too often, that motion is simply moving one large screen to another in spaces with minimal physical sets and no animatronics. 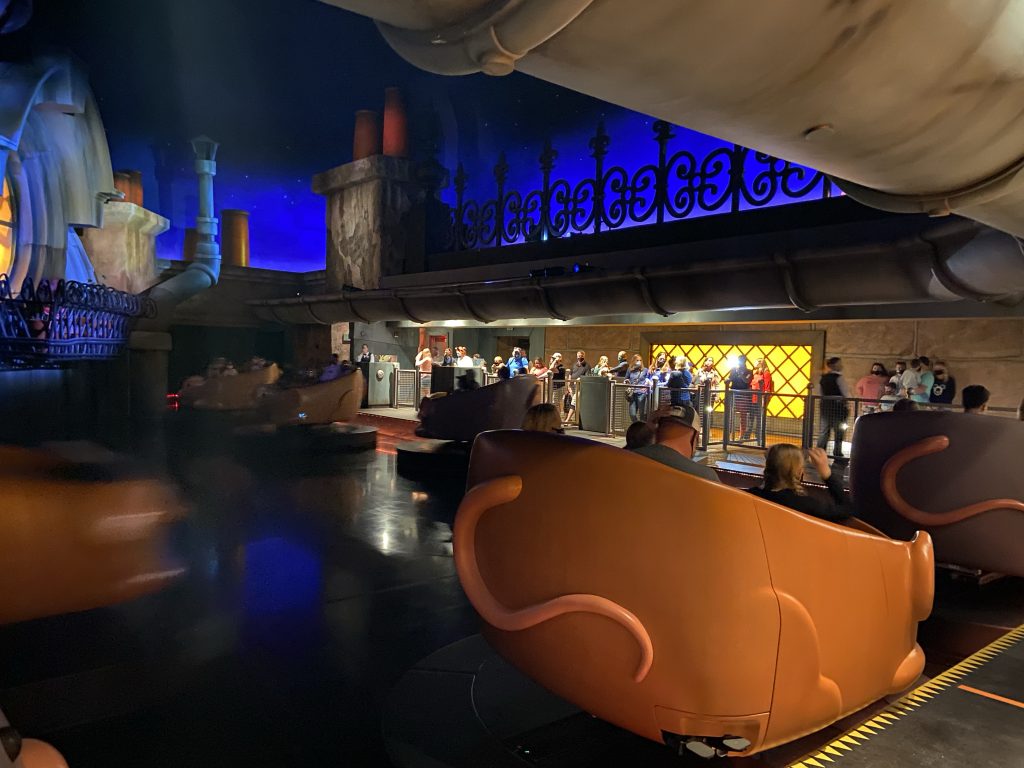 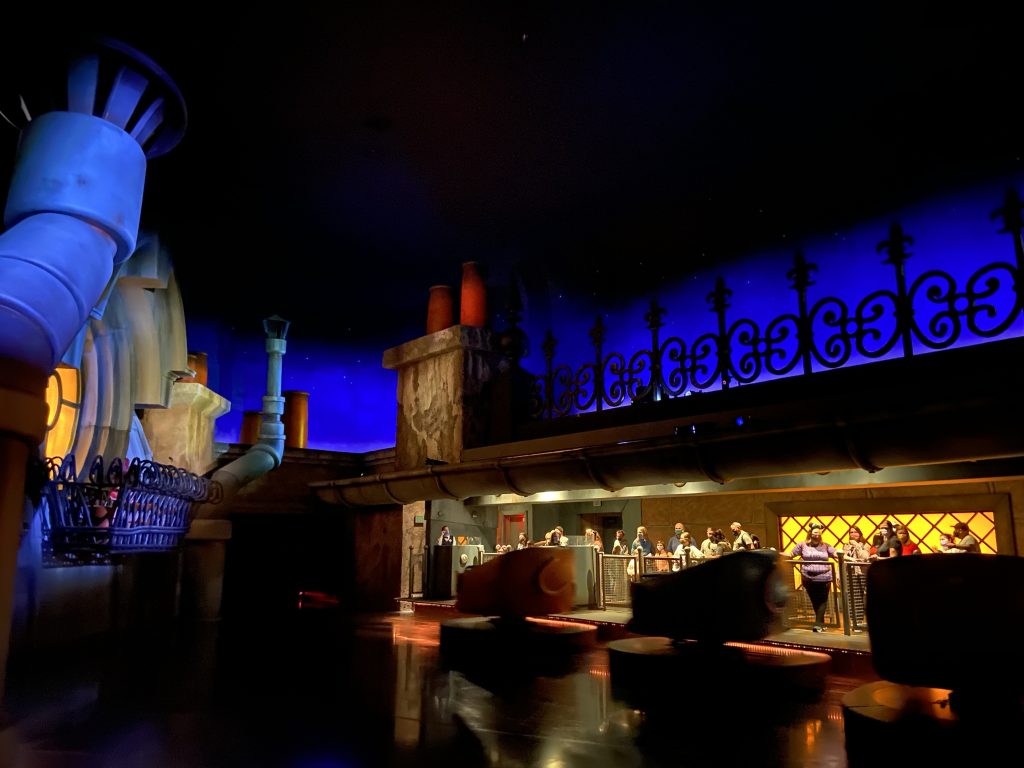 I’m a firm believer that screens are not an inherently worse choice in theme park attractions. In Ratatouille, they’re the main storytelling component, broken up only by a stroll through a pantry — as your rat-sized party stares up at enormous meats, veggies and cheeses — and a few turns through what is supposed to be the inside of a wall.

Imagine Harry Potter and the Escape from Gringotts without the coaster element and with less theming around the screens, and you’ll get the idea.

Most of the ride is spent in rooms that resemble bare warehouses staring at screens, often being able to see the edges of it, chipping away at your sense of immersion.  Disney didn’t dress up much else beyond predictable elements like two splashes of water (really, Imagineers?) and a heating effect when supposedly trapped under a stove.

This is the second-straight Disney World trackless ride that underwhelmed me, and I think the ride system is to blame.

Rise of the Resistance succeeded with the trackless technology, perhaps because it limited the “concrete warehouse” feel that I got from Runaway Railway and, now, Ratatouille. Maybe those environments just worked on a Star Destroyer. The freedom of movement provided by these vehicles will blow away the casual guest on their first ride, but that freedom requires so much open space that it limits the impact of any physical sets, spreading the scenery thin to allow for those wide open floors. 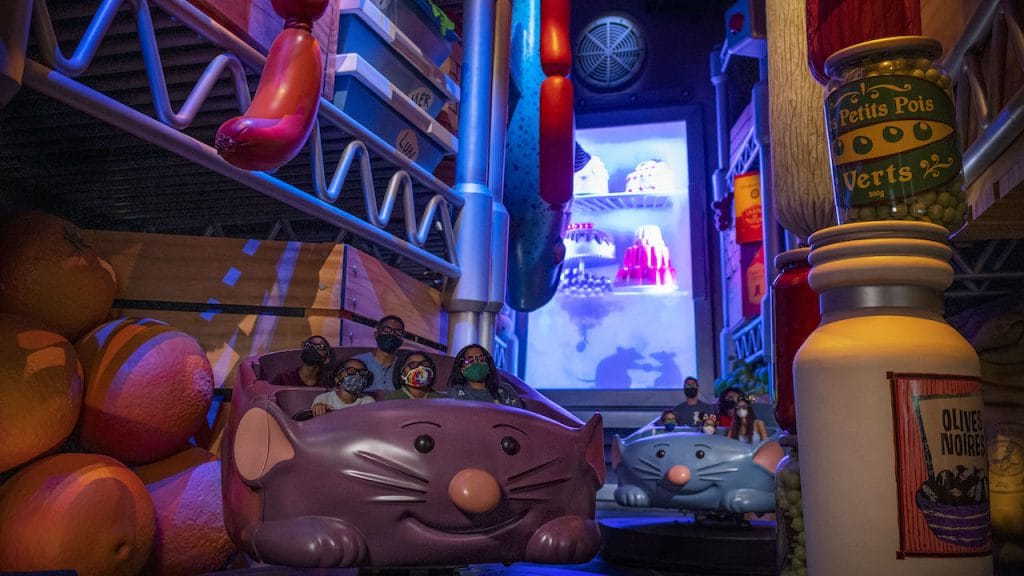 The best scene of the ride by far (Disney)

With Remy’s Ratatouille Adventure, I don’t believe the maneuverability rescues these spartan sets. Tightly-packed scenes with loads of details encourage me to come back to these dark ride worlds, but instead of immersion, what I remember is a whole lot of concrete.

Tracked dark rides like Universal Hollywood’s Secret Life of Pets: Off the Leash do not have this problem, and I found myself wishing that the cost of the trackless system had been invested into more entertaining physical environments.

Can the trackless tech overcome this flaw? I’m sure it can, but perhaps Disney should first ask whether new dark ride concepts need this system.

I did give Remy’s Ratatouille Adventure a higher grade than Runaway Railway, and that’s because it succeeds on several practical levels.

To properly judge Runaway Railway, you have to consider whether it’s an improvement over the ride it replaced. Ratatouille is an addition, which, given Disney World’s blessing of size, shouldn’t be so rare. It was always going to be a net positive for Epcot.

In fact, it brings a new attraction to a side of World Showcase which, until now, had no ride. Epcot still needs more rides, but this at least provides some reason for guests to venture to this corner of the park besides restaurants and shopping.

The balance will only become more pronounced once Guardians of the Galaxy: Cosmic Rewinds opens in summer 2022, placing the two newest attractions with vastly different thrill levels on separate sides of the park.

Maybe that’ll be a better fit in the long run, too, because Remy’s Ratatouille Adventure doesn’t fit the bill of an E-ticket, headliner attraction.