Great things are worth the wait, and that includes roller coasters.

Two years after it was originally supposed to debut, Pantheon is now entertaining guests at Busch Gardens Williamsburg. After my rides in April 2022, I’m ready to call it the park’s new No. 1 coaster. 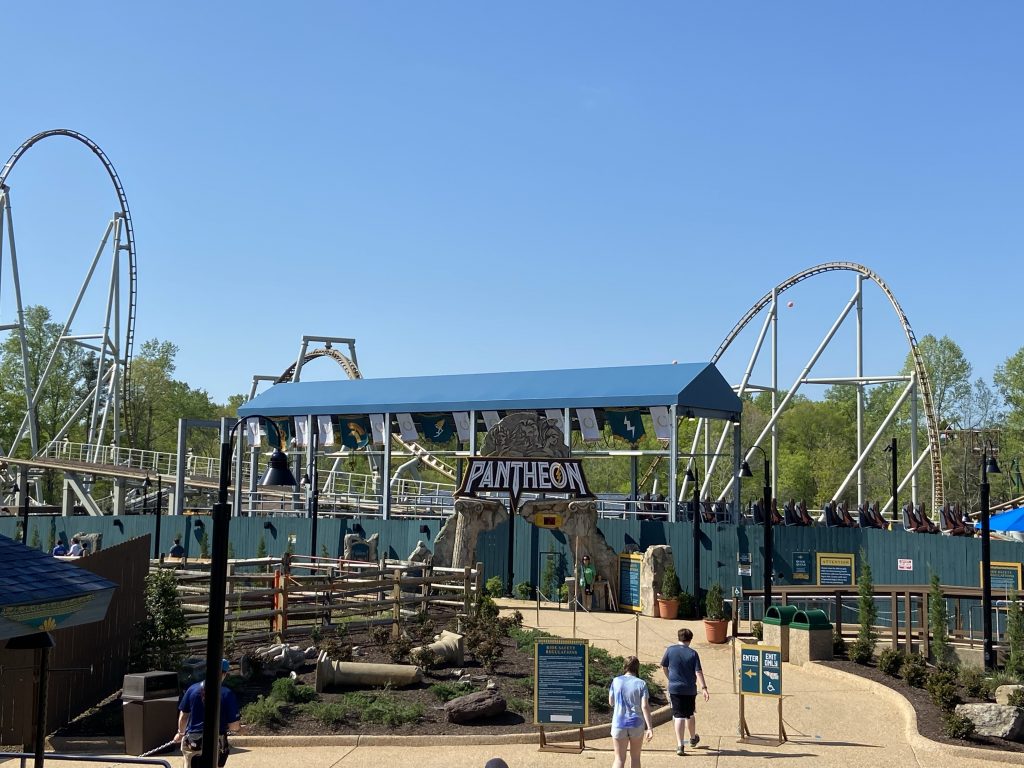 Overview of the coaster and its entrance (Theme Park Tribune)

In the Intamin Blitz style which coaster fans have already grown to love with Cedar Point’s Maverick and Universal Orlando’s VelociCoaster, Pantheon masterfully combines powerful launches, both graceful and forceful airtime moments and hangtime-filled inversions. The result is an experience worthy of a coaster claiming to be the world’s fastest multi-launch coaster, delivering plenty of thrills without being so uncomfortable or overly intense that only a diehard coaster enthusiast would enjoy it.

In fact, it’s greatest weakness may be what you’ll see before the ride, rather than anything on it.

There’s no disputing that Busch Gardens Williamsburg is a theme park rather than a carnival-style amusement park, and that dedication to theming carries over to other coaster queues and stations, such as Verbolten. That’s not the case with Pantheon.

Reeking of budget cuts, all you’ll find in the Pantheon queue are a few signs explaining how segments of the ride are meant to represent five Roman gods as you wind through brown-painted fencing and wind up in a similarly unadorned station. 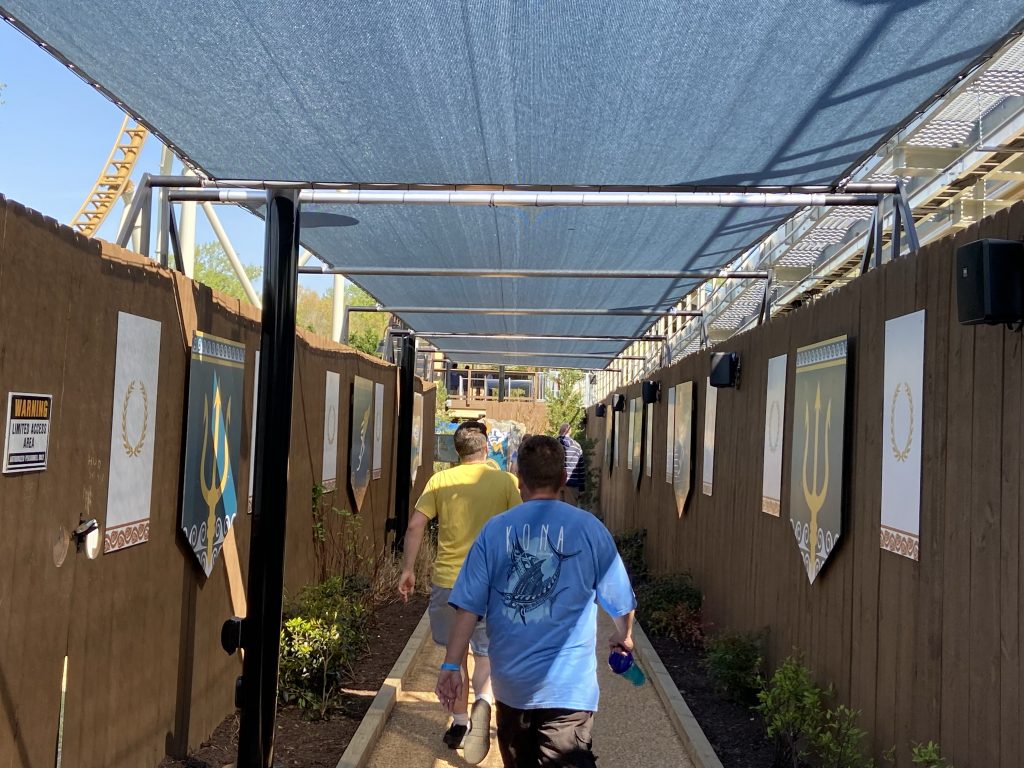 Busch Gardens can do better than this queue (Theme Park Tribune)

Maybe the brown paint job is appropriate, considering the queue sits downwind of an animal enclosure and the pungent piles that its inhabitants have left behind. Let’s just say that smell is an apt description for what I think about this queue space.

But heck, you’re not coming to this coaster for the queue anyway.

Like the VelociCoaster trains, Pantheon’s trains provide easy loading without lifting your legs over any barrier, and secures you without any seat belts or over-the-shoulder harnesses — just a lap bar that comes down from above.

You’ll roll out of the station with a left turn into the first launch, a mild 36 miles per hour, that propels you into a slow, hangtime-filled inversion. Intamin calls this a “Zero-G Winder,” but it’s essentially a corkscrew.

A few banked airtime hills are followed by the highlight of the coaster: the main launch section. You’ll roll into a 50 mph launch, along with a bunny hill, which doesn’t give you enough speed to make it over the top hat.

The track switches behind you, and as the train goes down backwards, it’s launched again, this time right into the bunny hill. 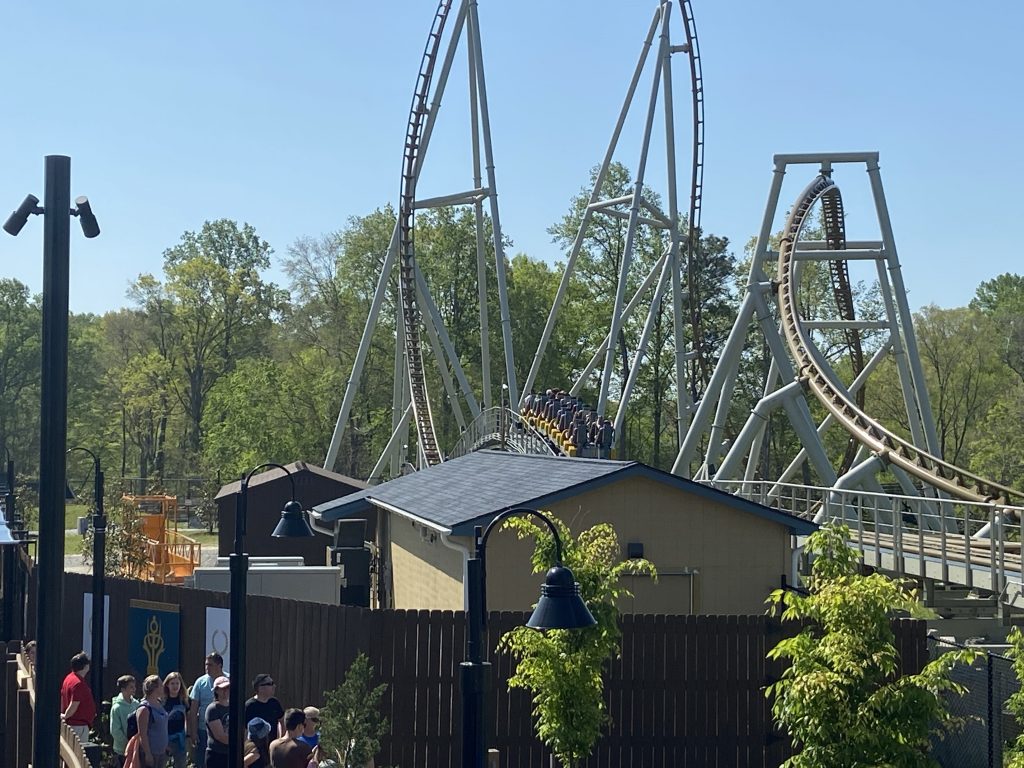 This is the ride’s best moment, as that acceleration creates forceful airtime that ejects you out of your seat — which you don’t anticipate since you’re moving backwards. It also manages to be forceful without the unpleasant, restraint-grinding-against-my-stomach feeling I often get from ejector moments on Rocky Mountain Construction’s hybrid coasters.

Just check coaster YouTuber ElToroRyan’s reaction at 1:08 of this video when he goes over that hill.

You then ascend the ride’s 178-foot-tall vertical spike, providing several seconds of floater airtime before the final 67 mph launch. This is just enough to get you over the top hat — providing more floater airtime — before its 95-degree drop.

The rest of the elements come in more rapid succession: a wave turn providing more floater airtime, the Zero-G stall that feels like a beam is about to chop your head off, and then a small wave turn-like “sideways airtime hill” before hitting the final brakes. 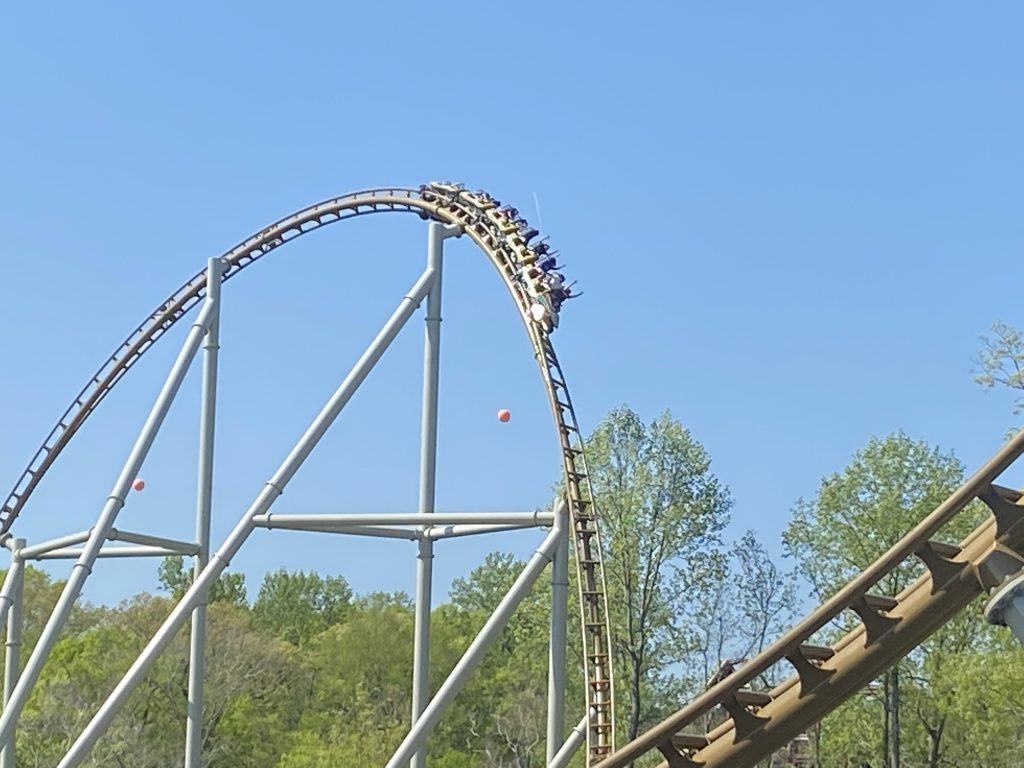 Between the speed, the airtime, and the two inversions, there’s not a single, weak element on the ride. None of the 3,328 feet of track feels wasted.

In fact, if I’m forcing myself to point out flaws in the actual ride experience, they are largely inconsequential nitpicks. 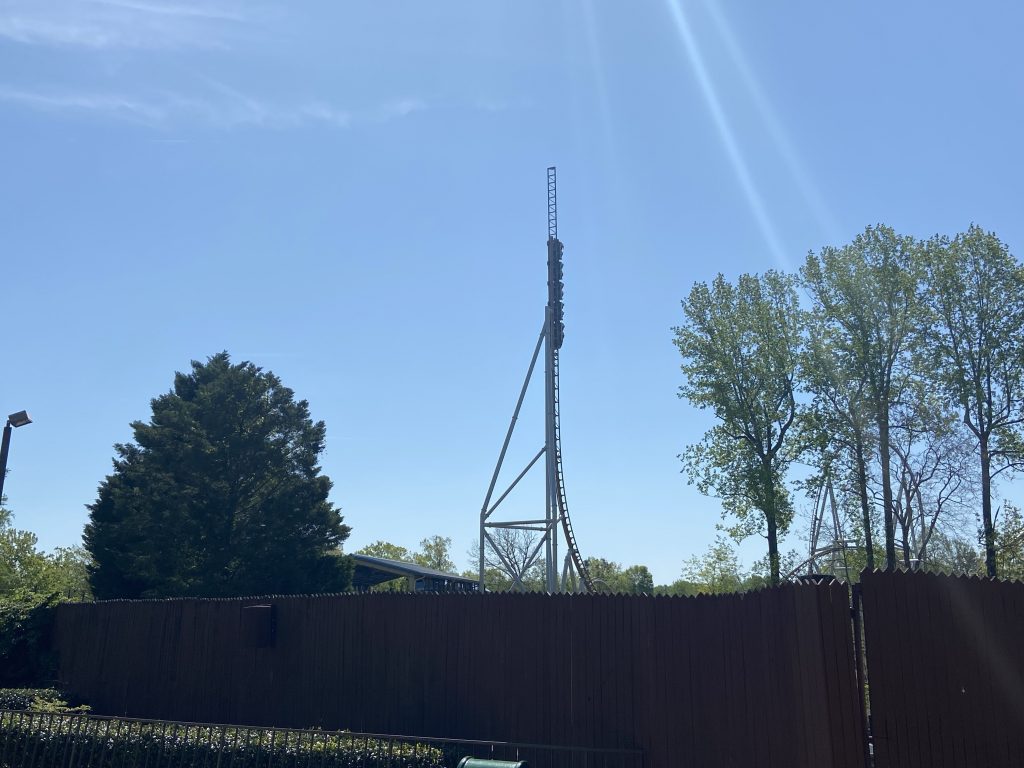 The head-chopping moment on the Zero-G stall, while entertaining, is the reason why the coaster has a height limit of 6-foot-4. That would only disqualify a small percentage of potential coaster riders, but it’s still lower than most coasters. Would moving that beam a little bit really have ruined that moment?

For more well-traveled coaster buffs, the ride may feel like a lesser version of VelociCoaster. Truthfully, it is, and Pantheon may have garnered more hype nationally if it had opened before its Orlando Intamin cousin as planned. But that doesn’t make Pantheon unworthy of coasters fans’ attention on its own.

Looking at the larger picture, I believe it gives Busch Gardens Williamsburg the edge over local rival Kings Dominion in terms of its coaster lineup. The Cedar Fair-owned park located an hour north sports two launch coasters — the 26-year-old Flight of Fear and the more family-oriented Backlot Stunt Coaster — neither of which can match Pantheon as a complete experience.

While the queue space seems like a wasted opportunity, Pantheon is otherwise exactly what Busch Gardens Williamsburg needed. It’s a top-tier coaster providing a variety of exciting elements that will please both the coaster fanatic and casual rider alike. Sure, this could have opened earlier and potentially gotten a bigger spotlight, but that delay will eventually be a footnote in its history.

For those casual coaster fans, if you liked VelociCoaster, Pantheon is worth making the trip to Virginia right now — even if bigger coasters are already in the works in Williamsburg.

DISCLOSURE: This review is based on my own opinion and perspective. I paid for my own park ticket. Busch Gardens Williamsburg did not grant me any special access to conduct this review.