DISCLOSURE: This review is based on my own opinion and perspective. I paid for my own hotel accommodations and park tickets. Disney did not grant me any special access to Star Wars: Galaxy’s Edge in order to conduct this review.

Seeing the Millennium Falcon in all its glory is enough to drive grown Star Wars fans to tears in Star Wars: Galaxy’s Edge at Disneyland. It’s a childhood dream come true.

But as far as riding on the “fastest hunk of junk in the galaxy,” your dreams probably didn’t involve mashing the same button over and over again — which is one of the experiences offered by the mixed bag that is Millennium Falcon: Smugglers Run.

Here’s how it works: Six guests enter the Falcon’s cockpit assigned as pilots, gunners, or engineers tasked with a smuggling mission. At the time I rode, a week after Galaxy’s Edge first opened, guests were not allowed to ask for a specific role, though you could switch seats with anyone else in your party. You were also generally not allowed to wait longer to order to secure your desired spot.

Predictably, most people wanted to be one of the two pilots. These roles differ slightly: the left pilot (Han Solo’s seat) controls the Falcon’s horizontal movement. The right pilot (the Chewbacca seat) controls the vertical movement, which was the role I had on my first very ride.

The controls are not hard to understand, especially if you’ve ever played a flight simulator (meaning pulling back on your flight stick causes the ship to go down, pushing up makes it dive). Buttons light up when they need to be pressed and the screen outside the cockpit window directed me to steer up or down to avoid obstacles. Those in the Chewie seat get to pull the lever to send the Falcon into hyperdrive, my favorite part of the entire ride. 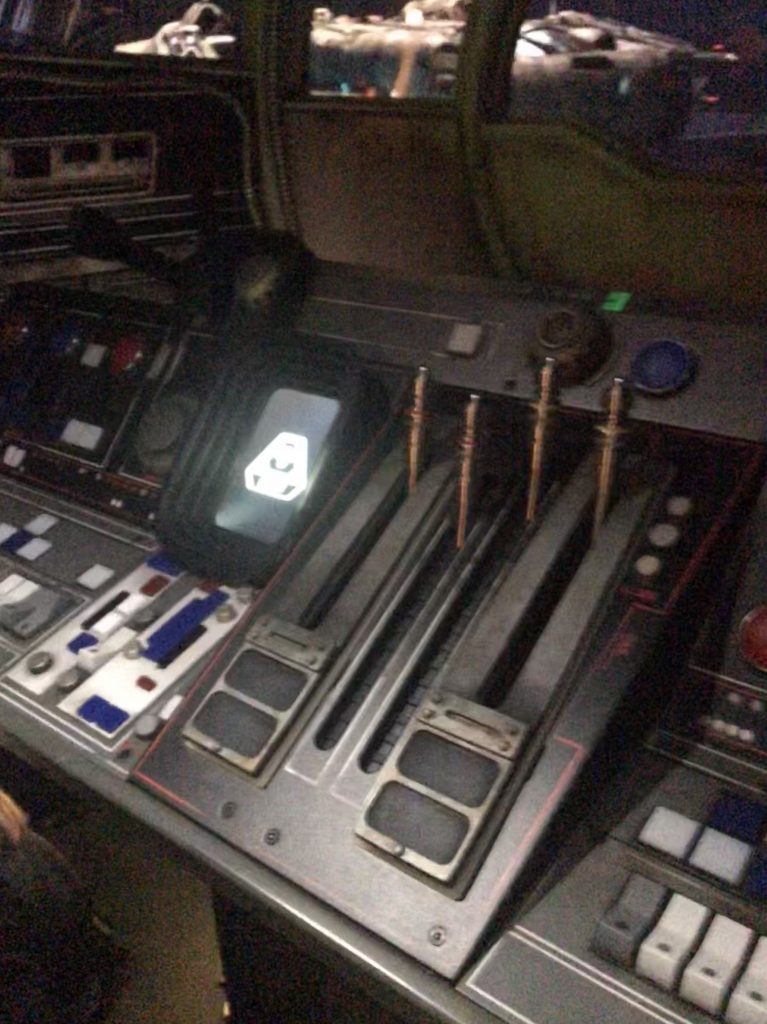 Some of the pilot controls inside Millennium Falcon: Smugglers Run (Orlando Rising)

Sitting in one of the two pilots’ seats provides the best ride experience that favorably compares to a video game. Not only do you feel in control, like when your poor piloting causes the ship to bump into something and the simulator shakes, but you have the best view of the action outside the cockpit.

Which brings me to the head-scratching design flaw impacting the other four positions: For gunners and engineers, the controls are to your left or right, not in front of you.

This means that, at least initially, you have to turn away from watching the ride experience to see what buttons you need to press. Of course it matches the layout of the Falcon’s control panels in the films. But if we’re making the inevitable comparisons to a video game, could you imagine having to turn your head to find the button to make Mario jump or Link swing his sword?

Gunners may have the least enjoyable experience. If you choose automatic control, as the ride attendant will suggest for first-timers, your ride will largely consist of pressing one button over and over. On the plus side, this motion is so repetitive that you can focus most of your attention on what’s happening outside the cockpit, but my arm felt sore afterwards. It falls well short of any space shooting video game I’ve ever played, both in terms of the control and the satisfaction you get when your blasts are on target. Unlike the thrill pilots will experience from “punching it” into hyperdrive, you won’t feel like your actions as gunner really did anything.

Engineers are tasked with “fixing” the ship as it takes damage. This means hitting a series of buttons and switches, which has the upside of being far less repetitive than the gunner’s role, but also further distracts you from what’s happening outside the cockpit, as you have to turn away to see what is flashing on your control panel.

The attraction clearly lends itself to repeat visits. In my four-hour reservation window at Galaxy’s Edge, I rode three times, an achievement I doubt I could repeat with such ease when the ride opens at Disney’s Hollywood Studios without a reservation system limiting capacity.

To be fair, the ride does sets a new mark in video game-level interactivity for a Disney attraction. You can’t crash the Falcon in 30 seconds and end the ride — imagine the line at Guest Services if that were possible — but you are able to pilot so poorly that Chewbacca takes control remotely or do well enough that you earn a short “bonus scene” towards the end of your journey.

Smugglers Run offers more than the largely symbolic button pressing seen in Mission: Space at Epcot, but it fails to strike a satisfactory balance between its video game ambitions and being a complete theme park experience. Compared to video games, you don’t feel you have the same level of control as you would in a Star Wars Battle Pod at your local Dave & Buster’s. As a theme park ride, the attempts to incorporate video game elements distract from the story and the action.

And it’s underdelivers on Disney’s own hype. Walt Disney Imagineering portfolio creative executive Scott Trowbridge had said the results of your Falcon mission would follow you into the rest of Black Spire Outpost, like having the bartender at the cantina tell you a bounty hunter is after you for damaging the ship and losing the loot. Instead, only a few small interactions are affected by your performance. If you smash up the ship, lights will flicker and sparking noises can be heard as you exit. If you ride again, Hondo Ohnaka, the space pirate who gave the mission, may mention you’re a repeat visitor.

It’s emblematic of the problems with Smugglers Run. It’s less than what you were promised and less than you wanted it to be. 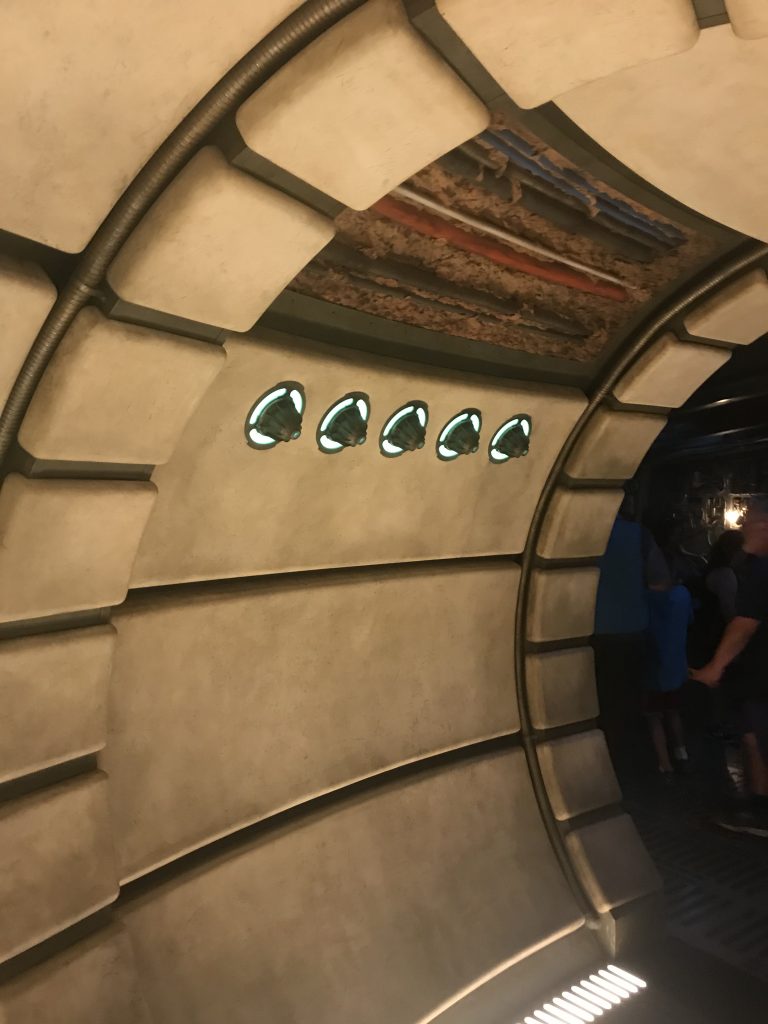 The recognizable hallways of the Millennium Falcon (Orlando Rising)

Before you’re strapped into your seat, however, Smugglers Run— which will be duplicated at Disney World’s version of Galaxy’s Edge opening August 29 — is nothing but glorious wish fulfillment for Star Wars fans. You will absolutely need a picture in front of Falcon. You’ll gaze in awe at the sheer size and detail of the ship as you circle behind it in the queue. You may even audibly gasp, as I did, when you walk into the first hallway, the chess room, and finally, the cockpit itself. It’s the immersion in this truly iconic Star Wars setting is what guests will remember the most.

Assuming you don’t skip it by taking advantage of the single-rider line, the intricate movements of the Ohnaka animatronic will undoubtedly impress even those who aren’t familiar with him from the “Star Wars Rebels” and “Clone Wars” animated series.

But in the end, if the attraction isn’t enjoyable for four of the six people riding it and the most spectacular moments are in the queue — how can you call it a success?