Walt Disney Imagineers have been tasked with replacing plenty of existing attractions over the history of Disney parks. Judging the new attraction can be as simple as answering one question: Is it better than what it replaced?

In the case of Mickey and Minnie’s Runaway Railway, I believe the answer is no.

Adding the first-ever ride-through attraction starring the Walt Disney Company’s icon should be easily well-received, even in the heated Disney parks debates of 2021. Mickey and Minnie Mouse are so associated with the Disney brand that they won’t carry the synergistic stench of Disney ramming in the newest, hottest intellectual property wherever it can. To the average guest, it’s surprising that they don’t have their own ride already.

Instead of hitching a ride on the gravy train, Runaway Railway falls short of its predecessor, doesn’t make good use of the large building it occupies, and delivers a noisy, sometimes charmless experience unbefitting of the mouse who started it all.

The Chinese Theatre is the weenie of Disney’s Hollywood Studios. It’s what pulls you deeper into the park, the landmark at its hub. That position alone means that whatever attraction calls it home should say something about the larger concept of the park.

The Great Movie Ride did that, with its mix of animatronics, practical sets, and live actors celebrating classic film. That fit right into Disney-MGM Studios’ glamorized vision of Hollywood with the Great Movie Ride at its center from 1989 to 2017. There’s no denying it needed updating, but what better way for Disney to show investors that it will exploit the expansive film libraries it now controls? 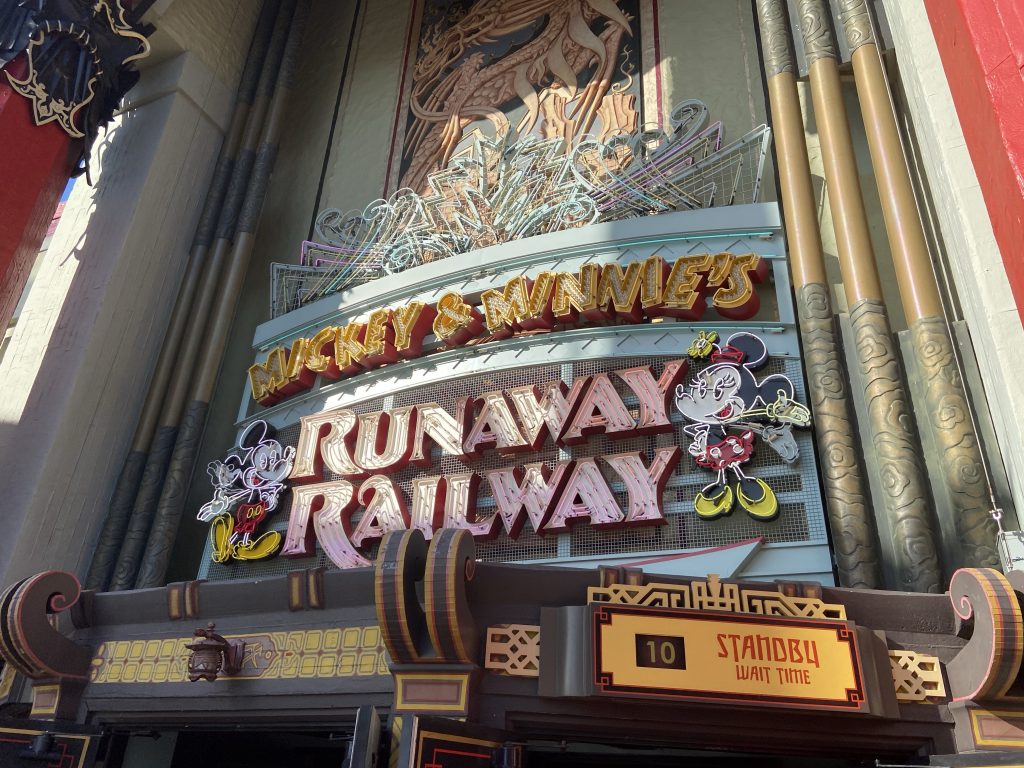 In contrast, Mickey and Minnie’s Runaway Railway doesn’t tell us anything about the identity of Disney’s Hollywood Studios — because the park really doesn’t have one. It’s largely just a collection of intellectual properties, with no common thread between, free of even the minor constraints of Magic Kingdom’s existing themed lands.

Moving from a conceptual to a more practical view, the ride’s placement still doesn’t make sense to me. When Great Movie Ride closed in 2017, it reduced the already-thin Studios attraction lineup to a mere four rides. Even with Star Wars: Galaxy’s Edge and Toy Story Land, the park still has a capacity problem, and keeping the Great Movie Ride would have improved that situation.

Surely Runaway Railway could have fit somewhere else as an addition, such as taking over the Star Wars Launch Bay building that once housed the Magic of Disney Animation. Who better than Mickey to be the star of the Animation Courtyard? Or has Disney forgotten about the blessing of size it enjoys in Florida and couldn’t have constructed something entirely new?

These concerns could be forgiven if the attraction had blown me away. Despite the presence of a tornado, it failed to do so.

The queue remains largely the same, with the Chinese Theater interior now adorned with posters from the recent Mickey Mouse shorts, leading to a pre-show scene where Goofy’s antics cleverly open up a space into the ride’s cartoon world. (Note: This scene was being skipped during my May 2021 visit due to COVID-19 restrictions). 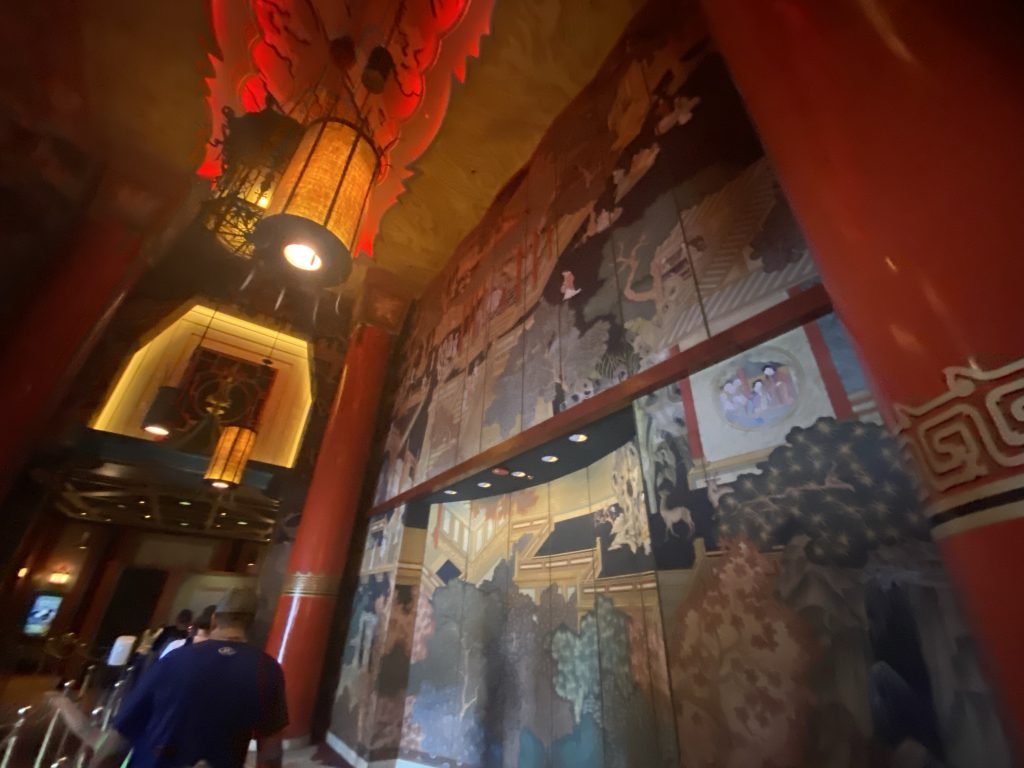 You then board what look to be train cars, with Goofy revealing himself as the conductor. Like his screen mishap, you soon find yourself in trouble, with the train cars detaching and your trackless ride experience beginning.

That detachment moment may have felt revolutionary thanks to its freedom of moment— if Disney hadn’t just opened another trackless ride in the same park just months earlier, the truly revolutionary Star Wars: Rise of the Resistance.

Unlike Rise, the ride vehicles spend much of the attraction acting quite similar to your standard, tracked Disney dark rides, which require far less space. They take advantage of the trackless freedom in a scene where each enters a separate room to simulate a tumble down a waterfall — one of the better moments showing off how the ride’s rooms can quickly change scenery — and a stop in Daisy Duck’s dance studio. Having your train car form a Conga line may seem fun, but it seems lazy compared to what Disney accomplished with its earlier trackless rides. 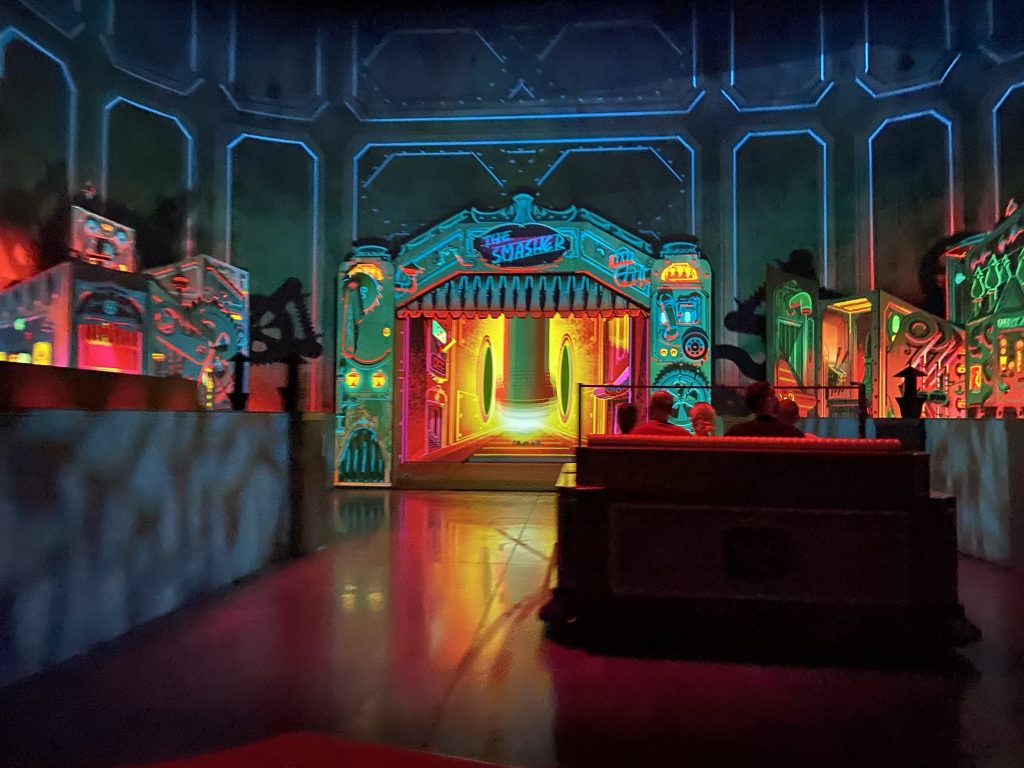 Trackless vehicles in a row, much like any tracked dark ride (Theme Park Tribune)

Not a screen problem

My issues with the ride are not about its use of screens. While Disney is showing some signs that it’s following Universal’s old playbook of relying too heavily on screens (a problem Universal has actively addressed with its output since 2019), I strongly disagree with the doctrine that screens in theme park rides are inherently bad. Like any ride element, they can be used in unimaginative, unexciting ways (Universal knows this), but I reject the notion that animatronics always make for a better attraction.

In Mickey and Minnie’s case, I think the screens work and the animatronics don’t. Hard for me to complain about screens that cover entire rooms shift the setting right before the guests’ eyes, putting an emphasis on the cartoon world we’ve entered. But the animatronics are of the variety seen on Seven Dwarfs Mine Train and Frozen Ever After variety. Whatever these figures gain in facial expressiveness thanks to the projected faces, they seem to surrender any kind of expression with their bodies. The screen-based environments were enough to place me in the cartoon world. 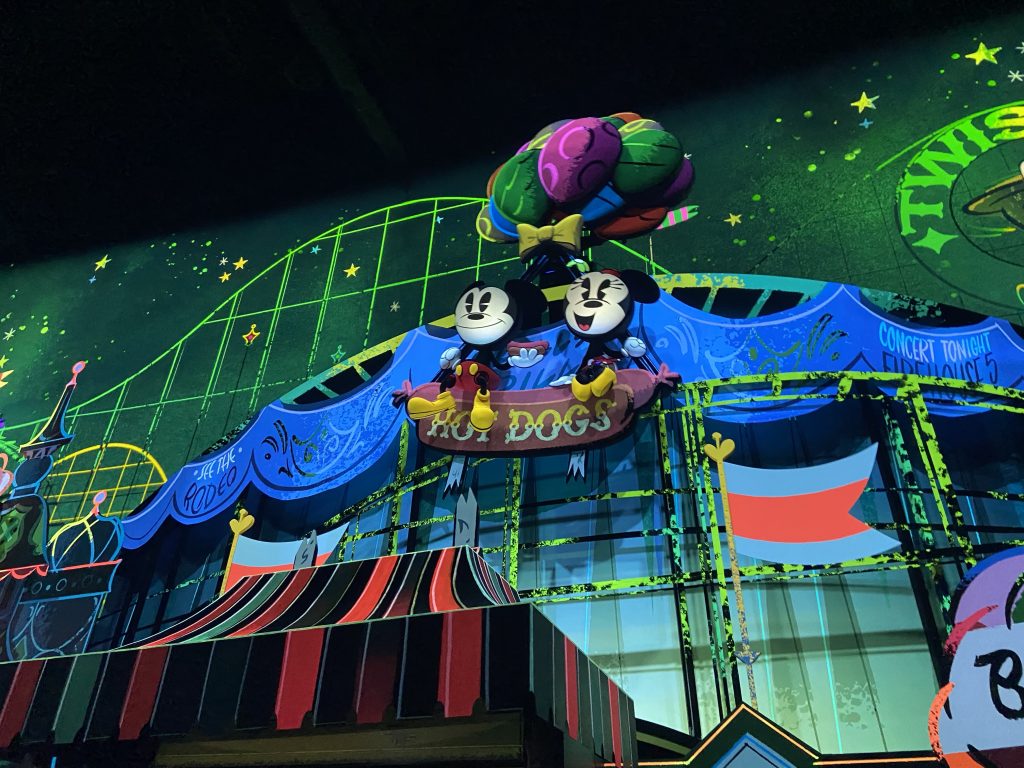 Expressive faces, sure, but not much else (Theme Park Tribune)

Speaking of the environments, while Mickey and Minnie do take you on a wild ride, it too often seems like sound and fury signifying nothing. It’s the classic “and then something went wrong” story, but the frantic cartoon pace seems to detract from the experience rather than encourage repeat rides. That chaos would be more entertaining to explore if the trackless vehicles actually explored these large spaces, but they consistently fail to utilize their freedom of movement.

The ride ends on a calming note with a song and a new character written specifically for the attraction. Creating a bit of new IP within an attraction is something I want to see more often from Disney, but it doesn’t excuse laziness elsewhere.

I suspect Mickey and Minnie’s Runaway Railway will be more favorably reviewed on the West Coast, where it’s set to open in the Toontown area of Disneyland in 2023. Despite lackluster animatronics, underutilization of the trackless ride technology, and a chaotic-but-unmemorable story, it’s still a perfectly acceptable dark ride for the modern age and it would have been a splendid addition to any Disney park.

But notice, again, how I said addition?

In Florida, it replaced the thesis attraction of Disney’s Hollywood Studios, reflecting the park’s muddled, throw-all-the-IPs-together-over-here-who cares mentality. Taking up prime real estate as the centerpiece of the park, Mickey and Minnie’s Runaway Railway needed to be something special. Instead, it’s a modern-day C-ticket attraction in an E-ticket space.

DISCLOSURE: This review is based on my own opinion and perspective. I paid for my own park tickets. Disney did not grant me any special access to the park or to Mickey and Minnie’s Runaway Railway to conduct this review.