It is possible to get what Disney considers deluxe accommodations at value prices — by staying at Universal Orlando Resort instead.

Loews Sapphire Falls Resort may represent the best value proposition of any on-site theme park hotel in Central Florida. I can (and will) complain about some inconsistencies with the service at its dining location, but otherwise the resort’s comfortable rooms, gorgeous pool area and easy transportation options has made it my personal favorite place to stay.

And a big reason why is Sapphire Falls feels like a deluxe hotel, but at nightly rates that can compete with the high end of Disney’s value category, like the Pop Century Resort.

Standard rooms feature two queen beds, a desk, a K-Cup brewer with some complimentary coffee pods, an extra chair by the window, and a luxurious shower (with a seat!) for settling down after a long day at the parks. The bathroom area in general is one of the big draws for Sapphire Falls rooms, as I make clear in the room tour video:

If pressed to find some flaws, the room could use an extra table on either side of the beds, or at least some extra USB outlets. 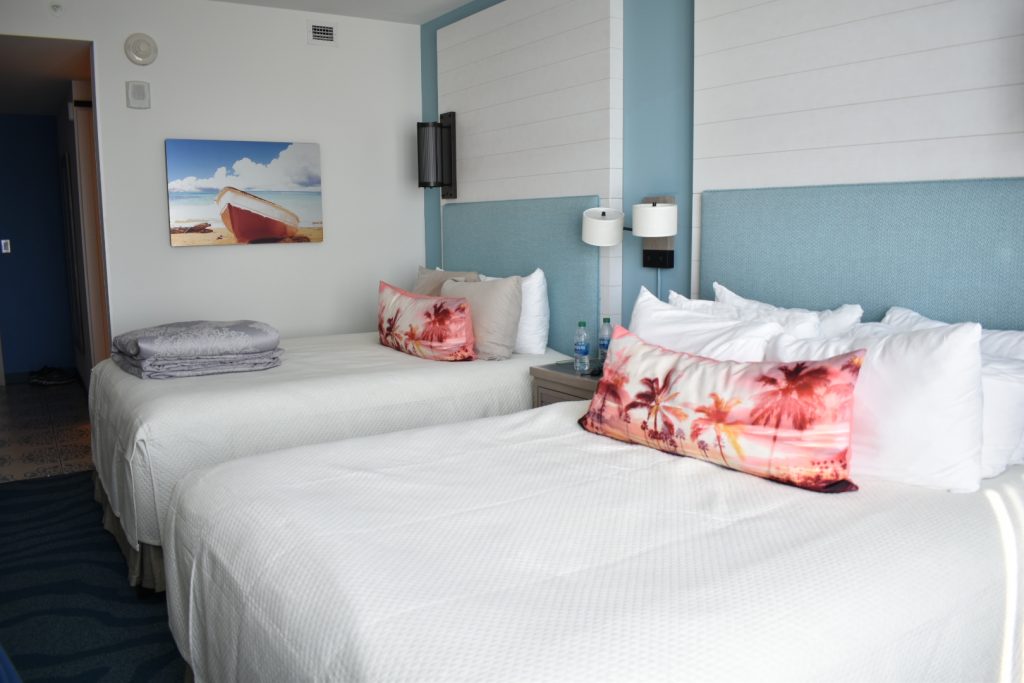 In my opinion, more than worth the $114 nightly rate I got with my annual passholder discount through Mouse & Muggle Travel Company.

One detail worth mentioning here is that traversing the resort can be a tad confusing at first. Depending on which tower you’re assigned, getting from your room to the water taxi dock and Amatista Cookhouse may require two elevator trips and a quick walk through the lobby.

Sapphire Falls features four dining options. The largest of these is Amatista Cookhouse, which serves breakfast (with a buffet option), lunch and dinner from its location in the lower level of the resort, next to the door that leads to the water taxi dock.

As I’ve said in my past hotel reviews, I’m no food critic. My tastes are rather simple and I’m an admittedly picky and unadventurous eater, so I try to assess the value of the meal rather than its individual tastes. 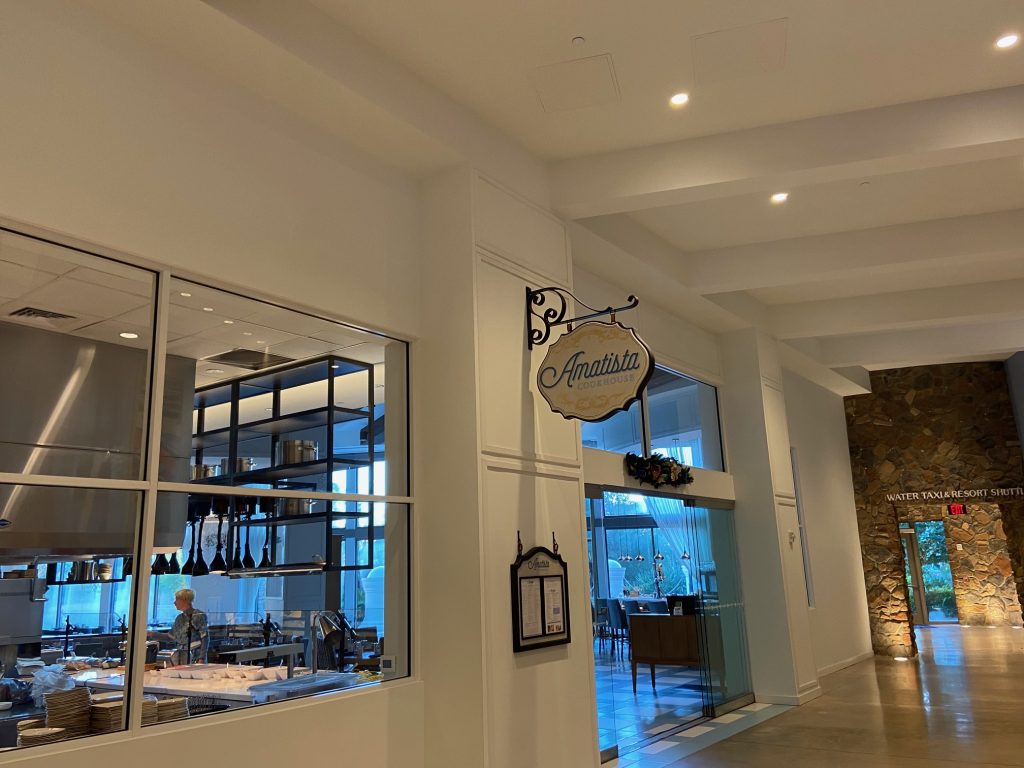 My favorite dish at Amatista has been the Mojo Marinated Rotisserie Chicken, a relatively straightforward introduction to Carribean-themed cuisine with its garlic and cilantro sauce. What hasn’t been so delightful, however, is the inconsistent and inattentive service I’ve received at the restaurant. Even when a majority of the space is empty, service has not been prompt.

During one breakfast stop, the late service — and the waiter getting both my steak and eggs order wrong — led them to comp my meal as I tried to race out of the hotel to get to the parks by opening. 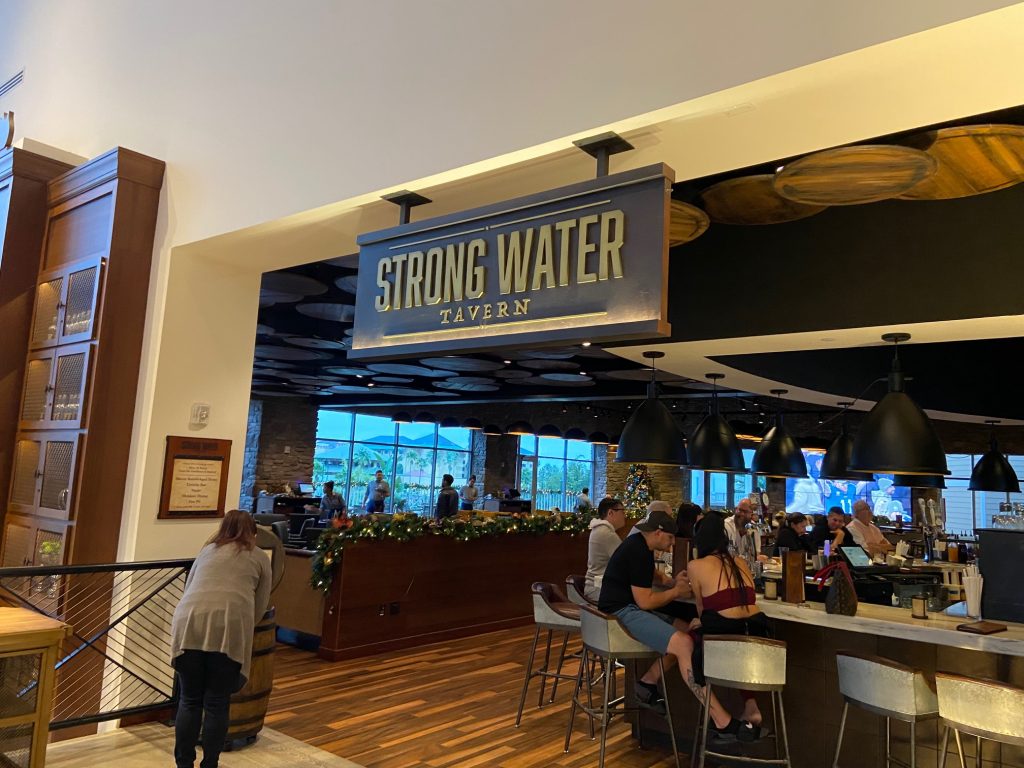 I’ve had better experiences at Strong Water Tavern. The menu here may only feature small plates and a lot of rum, but it’s very easy to make a full meal out of your visit. Our webmaster Emily swears these are the best fish tacos she’s ever had, whereas I preferred the Black Angus beef sliders and the Cuba Libre drink with barrel-aged cola syrup, lime zest and Cana Brava rum.

Be warned, the cost of these dishes add up quickly; three small plates and two drinks came out to more than $90 after tip. The service here was much better than Amatista thanks to our waiter Manny.

You’ll find more drink options out at the Drhum Club Kantine pool bar. I’ve never eaten here, but the rum-heavy drink selection is a quality addition to the Carribean vibes. 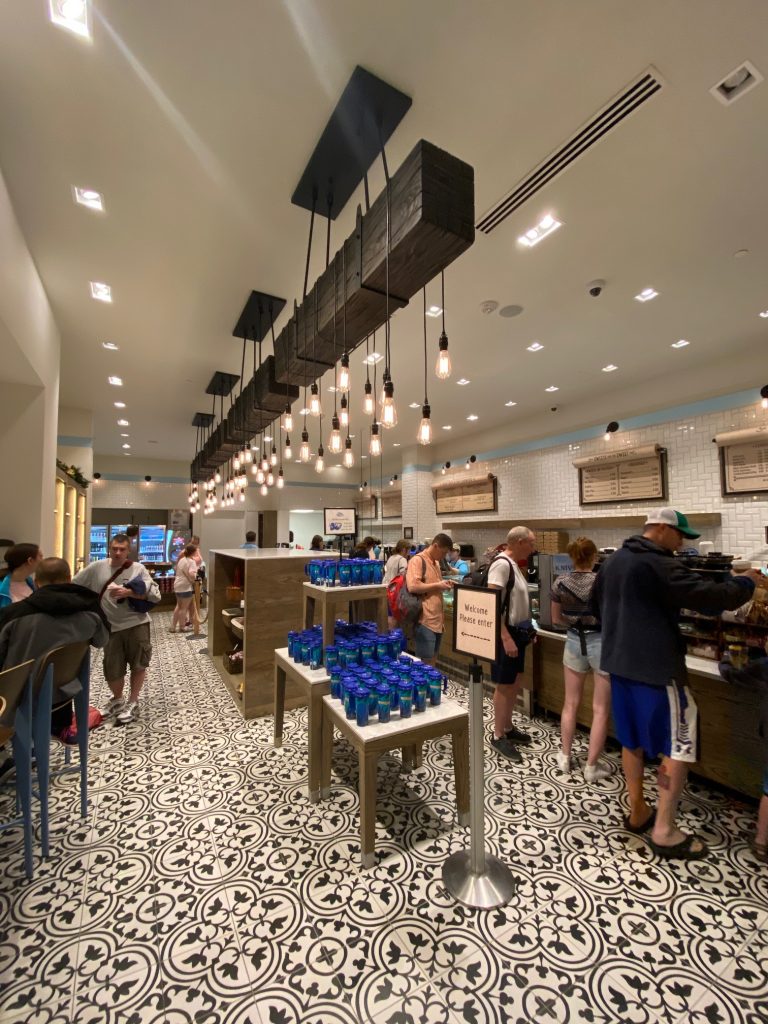 Sapphire Falls sort of has a quick service option with the New Dutch Trading Company. Largely a stand-in for the typical Universal hotel Starbucks, this location does have a small selection of sandwiches and soups, along with ice cream, after 11 a.m.

Considering how a relatively simple roast beef sandwich will set you back $12, however, I don’t think this provides a good lunch or dinner option, especially compared to more robust offerings at other hotel food courts. And as always, avoid the grab-and-go options here; you’re much better off making a quick trip to Walgreens or getting a small grocery delivery than getting gouged for chips and snacks here.

While there’s no lazy river like Cabana Bay, Sapphire Falls’ massive 16,000 square-foot pool will still keep you entertained. Once promoted as the largest on the Universal property, this pool’s layout consists of a zero-entry section in the middle that steadily gets deeper as it expands on either side.

The area caters both to the parents and adults who want to relax and the kids who need constant stimulation. For the former, there’s a hot tub, a fire pit and two white sand beaches. For the hyperactive among us, there’s a slide and nearby games, such as ping-pong tables and an oversized Connect Four set. 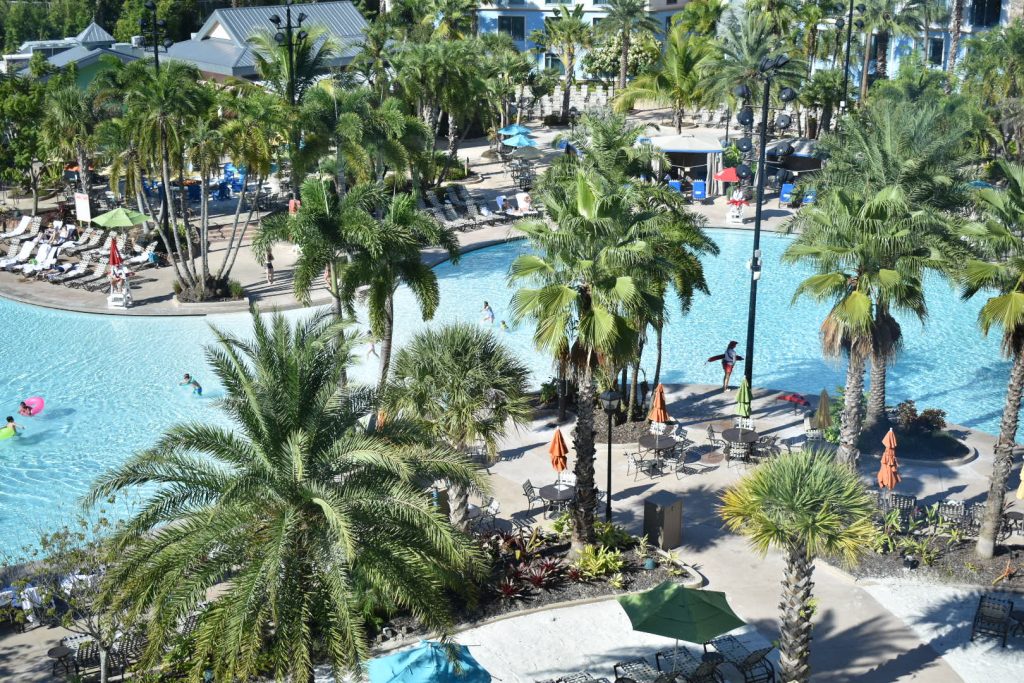 Overview of the pool at Sapphire Falls (Orlando Rising)

While the lazy river may still make Cabana Bay the king of Universal resort pools, you’ll have no trouble unwinding from a long theme park day here. The one downside, however, is that the pool does not seem to be well-heated on those rare mild days in Orlando. During my last visit, a high in the low 70s made the Sapphire Falls pool feel like ice — whereas I was totally at ease in the warmer Pop Century pool at Disney World under the same conditions.

Besides the aforementioned pool activities, the same area of Sapphire Falls offers a fitness center and a rather small arcade. The lobby has the requisite Universal Studios Store, this time with a healthy selection of beach wear and some resort-specific merchandise. 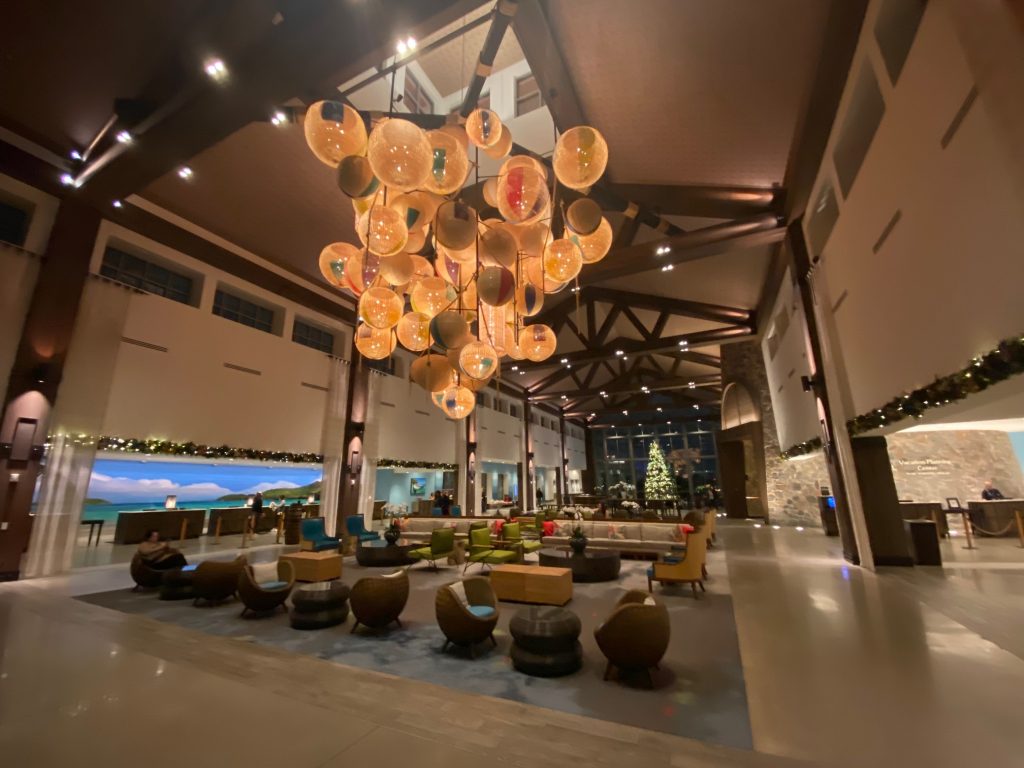 One of the nicest amenities, however, is the one that takes you away from the resort: the water taxi. Boarding just outside Amatista, this service runs directly to Universal CityWalk throughout the day. It’s rare to have to wait more than 10 minutes to be picked up on either end, and you’re not stopping at any other resorts.

It’s remarkable what a difference this service makes compared to Cabana Bay. There, a bus will take you only between the hotel and the guest drop-off point, leaving you to go through the more crowded security checkpoint for CityWalk with visitors using the parking garage. Plus, you have to trudge from that location through all of CityWalk to get to the parks.

The water taxis drop you off much closer to the park entrances and you’ll breeze through security at the docks. It may not seem like a huge benefit, but every step counts when you’re in a long theme park day.

A walking path to CityWalk is also available, but I’d recommend the water taxi instead, unless it happens to be down for weather-related reasons.

Parking is available for guests at Sapphire Falls, but it won’t come cheap. Nightly rates have now hit $26 for self-parking and $33 for valet.

If you can snag this resort at the kind of rates I’ve seen — often under $150 per night — you are getting one of the best bargains in Orlando.

No other on-site hotel is going to offer four dining locations, a gigantic pool and easy park transportation at that price range. At Disney, there are times when you’d be lucky to stay in a musty room at All-Star Sports for that amount of money.

While the service at the dining locations could use some improvement, and you’ll be subject to the same kind of price gouging on parking and snacks as you’d expect at any theme park resort, those are admittedly minor quibbles — all easily solved by a long, steamy Sapphire Falls shower.

Editor’s note: Mouse & Muggle Travel Company did not pay to be mentioned in this article.