DISCLOSURE: This review is based on my own opinion and perspective. I paid for my park ticket. Knott’s Berry Farm did not grant me any special access to the park and no employees were aware that I was conducting a review.

You may think the modern theme park began with Disneyland in Anaheim, California, but many of its core concepts really came from an older park a few miles north: Knott’s Berry Farm.

It would take a book to trace the 100-year history from an actual berry farm to the 12th-most visited theme park in the U.S. What I’m here to do is explain why this place is worth visiting.

Orlando theme parks often think Disney and Universal exist in a class by themselves as multi-day destinations. For the most part, they’re right, but Knott’s has the charm and history that puts it well above your average regional theme park.

The value proposition doesn’t hurt, either; I spent a little more than $50 for a Saturday ticket at Knott’s. For another $50, I could have upgraded to a season pass — and frankly, I regret not taking advantage of that offer.

Larger regional parks, like Ohio’s Cedar Point or North Carolina’s Carowinds (both part of the Cedar Fair chain that owns Knott’s) are often thought to be heavy on roller coasters and thrilling flat rides but light on everything else. Again, that’s often a legitimate assumption, but Knott’s is an exception to the rule.

Strange as it may sound to thrillseekers, the ride that I most wanted to experience at Knott’s was not a big coaster, but the legendary Calico Mine Ride. Opened in 1960, this dark ride through a faux mountain features not only beautiful scenery, but dozens of animatronic figures — well before Disney’s Pirates of Caribbean. In fact, Walt Disney himself was a spectator while the ride was under construction. 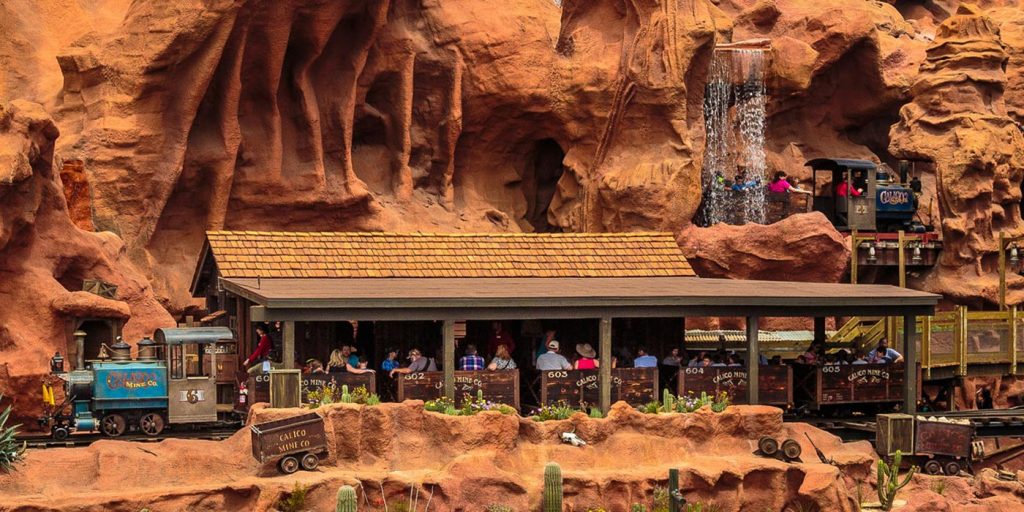 Your train slowly snakes through caverns and underground lakes before an explosion of dynamite propels you towards the exit. Thrillseekers may bypass it for the next big steel behemoth, but for me, Calico Mine Ride is the kind of timeless attraction that made me fall in love with theme parks. Seeing one outside the Disney and Universal bubble was worth the price of admission alone.

Other attractions at Knott’s mix the thrills with that timeless quality, like Timber Mountain Log Ride, which combined animatronic scenes and water ride thrills 20 years before Splash Mountain. Calico River Rapids is much newer — having debuted in 1987 as Bigfoot Rapids before a renaming and retooling last year — but has the same balance. And in my opinion, it pulls it off better than similar Disney (like Kali River Rapids) or Universal (Popeye & Bluto’s Bilge-Rat Barges) rides.

If you’re looking to settle back down into a quintessential Knott’s experience, try the Calico Railroad. Dating from 1952 — yes, Knott’s had a railroad before Disneyland even existed — the ride uses an authentic early 1900s train with fully enclosed seating, unlike its Disney counterpart. You’ll even get to chuckle as two hapless bandits attempt to rob you as he departs from the train depot.

I may be gushing over the animatronic rides, but I don’t want to undersell the stellar coaster lineup at Knott’s. 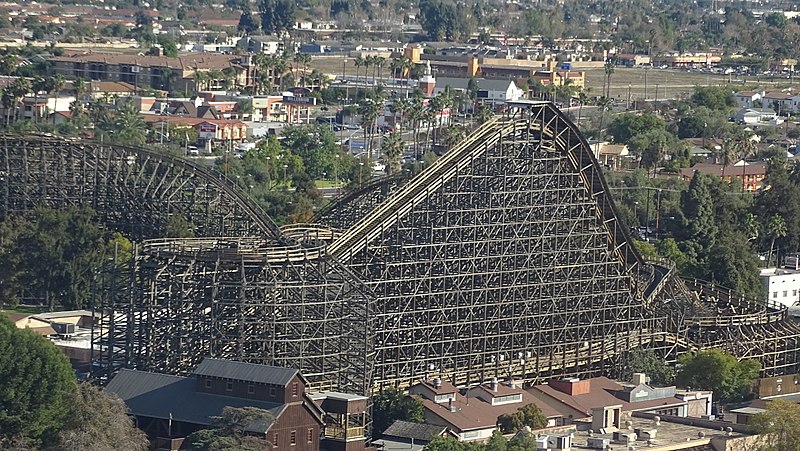 At 118 feet in height and 4,553 feet in length, GhostRider is the tallest and longest wooden coaster on the West Coast. Not only is it much smoother than most woodies, but it packs in a number of superb airtime moments, lateral turns and close calls through its wooden support structure — all enough for me to dub this my favorite wooden coaster.

I highly recommend hitting this ride first. Even when rope-dropping the park, the wait time quickly exceeded 20 minutes. 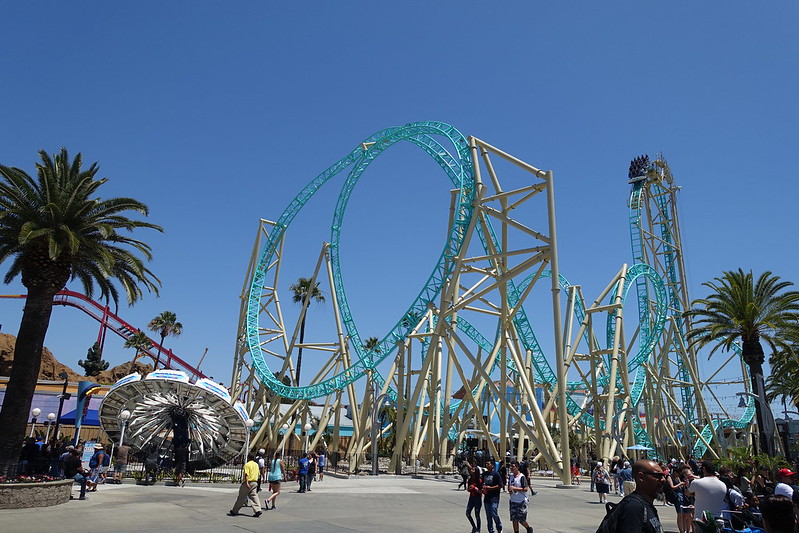 My second favorite coaster of the day was HangTime, a relatively new addition to the park. The defining feature of this exquisite steel coaster is its lift hill and first drop. After ascending 150 feet, your train is momentarily stalled ahead of the 96-degree drop, followed by five different kinds of inversions.

Other coasters I would recommend on my visit are Silver Bullet, a steel inverted coaster from legendary Swiss manufacturer Bolliger & Mabillard (the company behind Universal Orlando’s Hulk coaster) and Xcelerator, a launch coaster that hits 82 miles per hour.

Not all the coasters are created equal here. Pony Express, for example, features odd seats shaped like a horse, but otherwise the 36-second experience simply isn’t worth the slow loading time.

Like other regional parks, Knott’s has its fair share of indistinct flat rides that are worth skipping. Some offer at least a modicum of theming, like the kiddie attractions in the adorable Camp Snoopy section of the park, but others feel ripped straight from your local carnival, like the amusement rides in the Boardwalk area.

The biggest downside to Knott’s ride lineup are the actual operations. For those used to Disney and Universal service, you’ll notice procedures that slow down operations and hamper your touring. Guests are given an area to store loose items before riding a coaster, but this takes place on the platform itself, causing an awkward, unorganized dash that extends the interval between trains being dispatched.

Those small delays will cause wait times to increase, but you may not know before you get in your next queue. Knott’s does have a mobile app, but its updates lagged well behind the real wait times — I decided against a second ride on Xcelerator when a guest warned me the wait looked to be over an hour long. On the app, the listed wait time was only 10 minutes.

That leaves room for an obvious tip: try to make your first visit on a weekday. With the affordability of Knott’s season passes, locals flood into the parks on Saturdays and Sundays. By early afternoon, almost every roller coaster in the park had a posted wait time of at least one hour, and the crowds were only getting bigger.

Another slight against regional parks is the lack of immersive theming. Go to your average Six Flags, you’re likely to see a Superman ride nestled into an area with vague New Orleans touches or a Joker coaster whose theme is limited to the ride sign and purple paint job.

That’s not the case at Knott’s Berry Farm, thanks to Ghost Town. 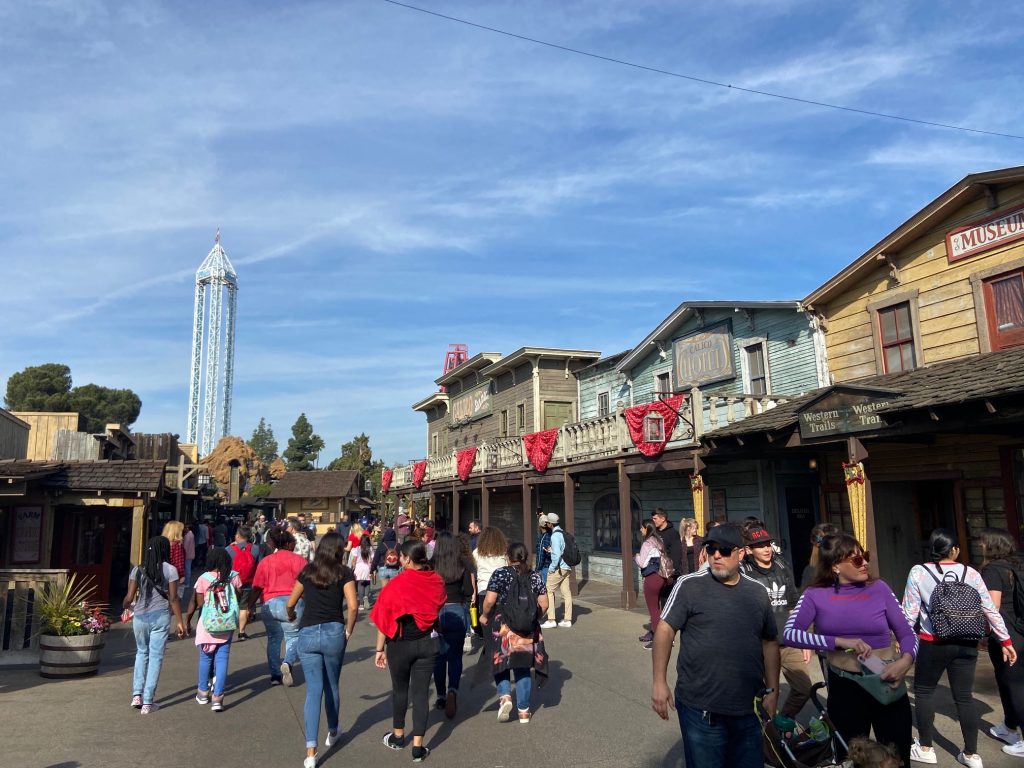 Park founder Walter Knott began assembling the Old West mining town in 1940. While it’s seen plenty of changes since — coasters like GhostRider and Silver Bullet now call this part of the park home — it still has some of the charming experiences that are rarely seen in today’s coaster-heavy parks.

You can find a genuine blacksmith at work, wander the rows of historical tools and guns at the Western Trails Museum or see the inside of a one-room Kansas schoolhouse built in the 1870s and transported to Knott’s in 1952. 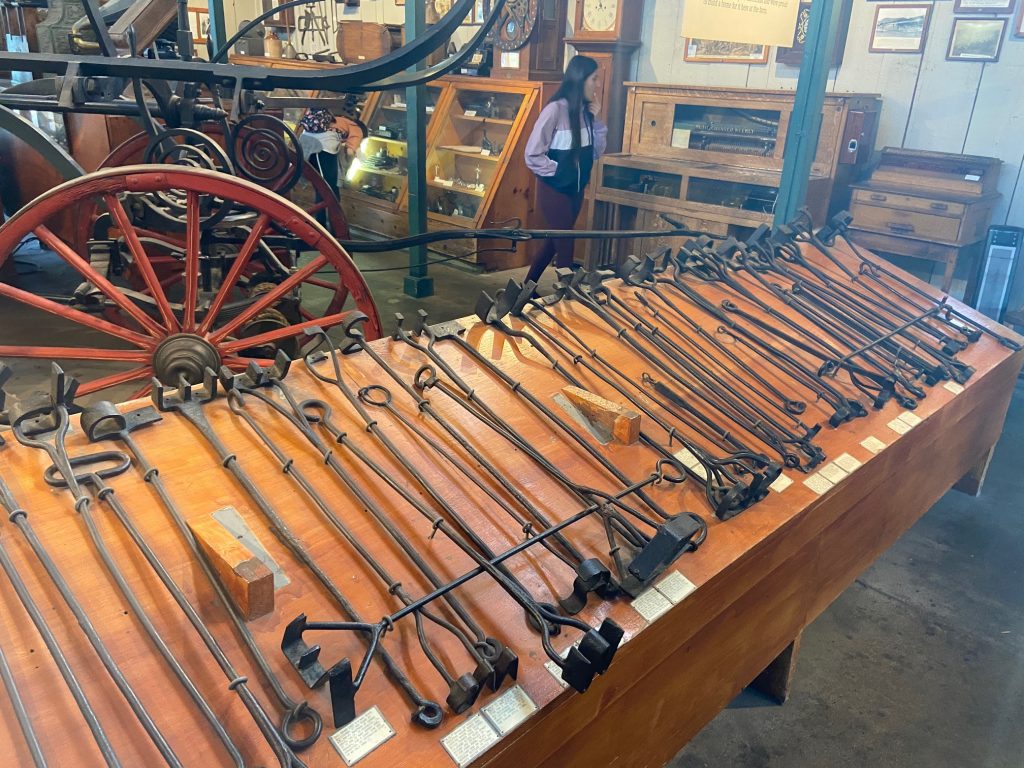 This area further illustrates how Knott’s was inventing the immersive theme park experience well before Disneyland opened. In an odd twist, it both predated and outlived similar Disney offerings; simple diversions like a weaver working threads still exist here, but would’ve long ago been replaced by another gift shop at a Disney park.

Here’s my bold statement:  I think Ghost Town is better than Frontierland.

If you’re in the mood for a more interactive experience, on select summer days, the park presents Ghost Town Alive, a sort of immersive theater experience around the land. 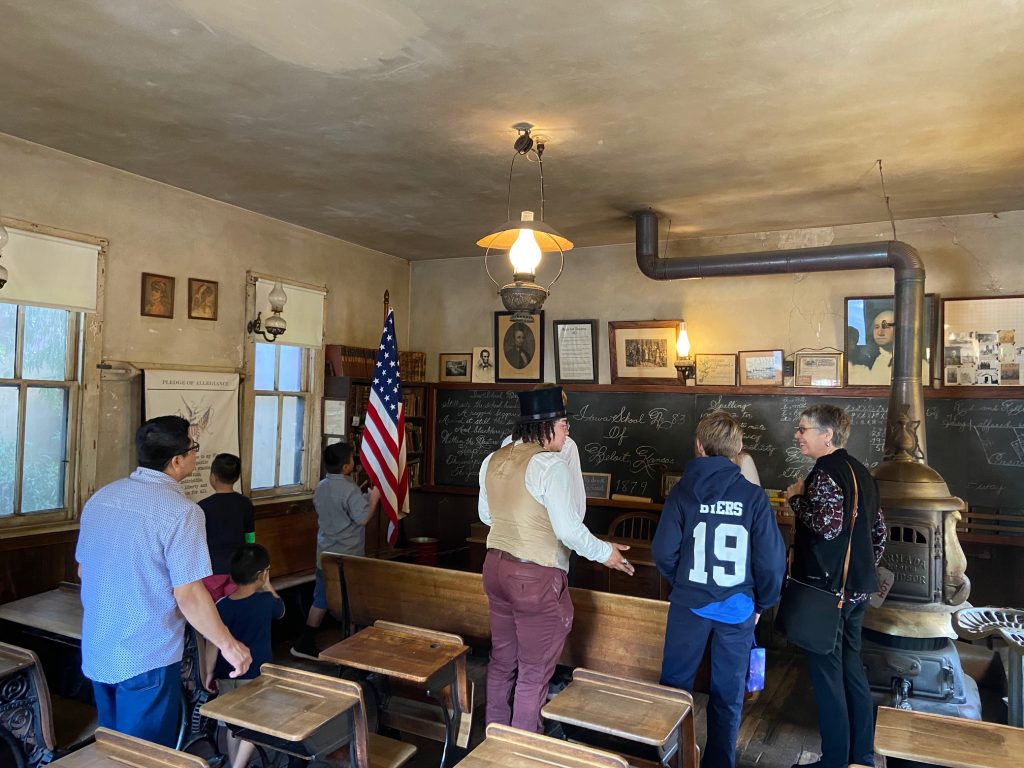 Ghost Town really is the heart of Knott’s, from the shops to Butterfield Stagecoach to the train depot. Outside its boundaries, however, it too often resembles any other regional amusement park — with little in the way of theming.

Obviously, I understand Knott’s doesn’t have Disney or Universal money, and I’m not such a purist that I become enraged at visible coaster supports. But after walking through Ghost Town, the Boardwalk and Fiesta Village sections come off as frustratingly ordinary. 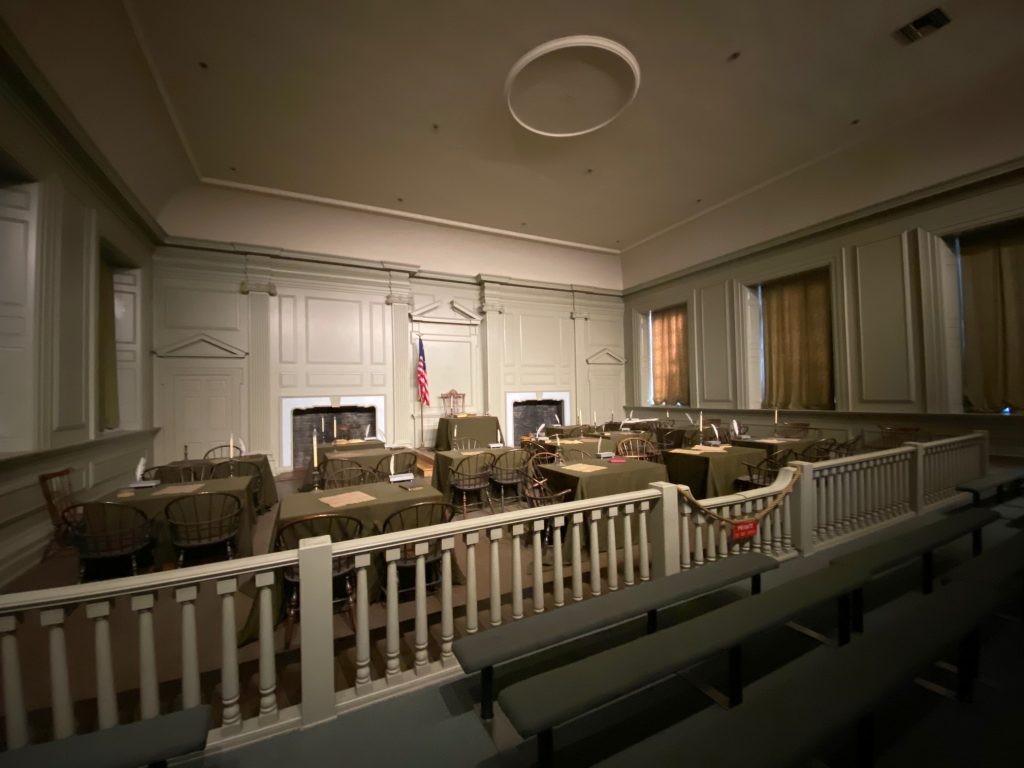 One of the more interesting sites at Knott’s isn’t even in the park. Across from the California Marketplace, you’ll find a full-scale replica of Philadelphia’s Independence Hall, where both the Declaration of Independence and Constitution were debated. It’s a living testament to Walter Knott’s politics and patriotism — he called it “the greatest shrine to individual freedom in all the world” in a 1969 brochure.  It was nearly deserted during my Saturday visit, but it made for a nice respite from the crowds as I quietly perused its collection, which includes a replica of the Liberty Bell.

Food is where I was most disappointed in my Knott’s visit.

I had carved out a chunk of my day to sit down and eat at the famous Knott’s Chicken Dinner Restaurant. It’s no stretch to say this is why the park exists. The adjacent shops and Ghost Town were developed to entertain guests as they waited for tables at the restaurant to open up. 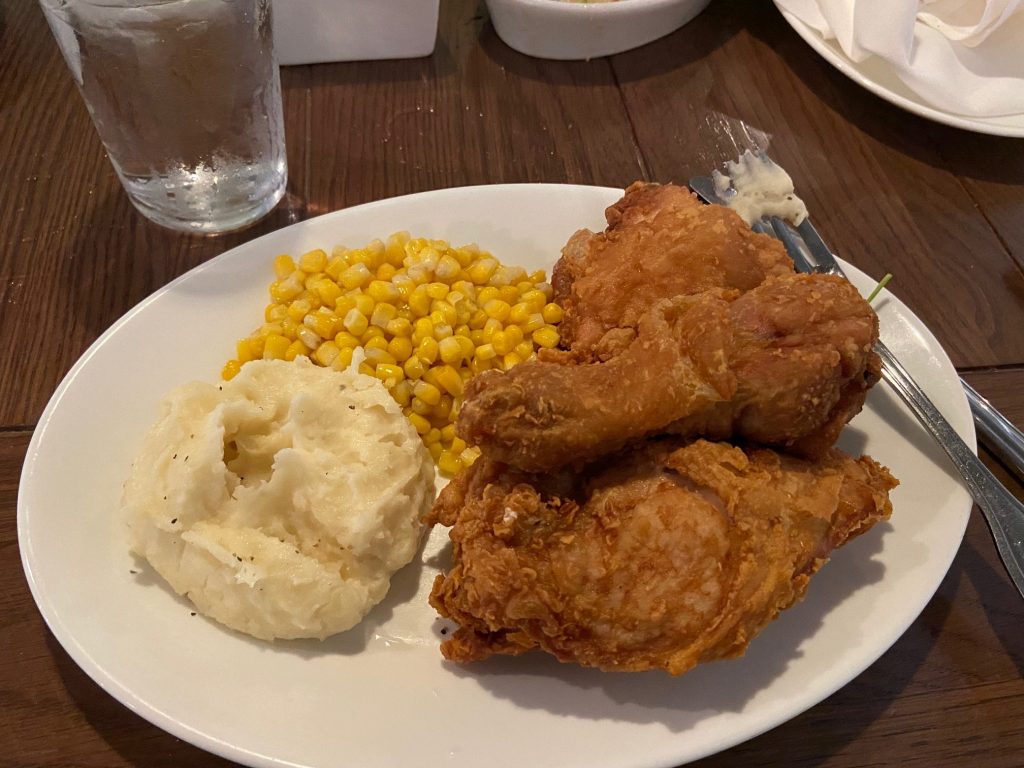 I’ve said before that I’m no high-minded food critic; I’m just an unadventurous, simple eater, the kind of guy who prefers his cheeseburgers plain, but for a simple fried chicken dinner, Knott’s provided a thoroughly unimpressive experience.

The chicken crust needed more seasoning, the meat came off as dry and dull, and the only flavor from the mashed potatoes came from the pepper shaker. I can’t complain about the portion size, but what good is it having a big plate of bland food?

Perhaps my hopes were set too high after getting my biscuit appetizers. These were absolutely perfect, and complemented by Knott’s signature boysenberry jam. Those alone make me willing to give the restaurant another try, though next time, I’ll choose a different entree.

A visit to Knott’s Berry Farm checks off a lot of boxes for even a casual theme park fan. World class roller coasters? Check. Immersive dark rides? Check. Immersive theming? Check, at least in Ghost Town. And all for a fraction of what you’d pay for one day at Disney World or Universal Orlando.

For me, Ghost Town alone was worth the price of admission, from its charming rides to the authentic Old West atmosphere. Even if you don’t know much about Knott’s itself, why not get a taste of what theme park pioneers were offering back in the 1950s and 60s?

There are areas where it understandably pales in comparison to the likes of Disney and Universal, but Knott’s Berry Farm offers a much more well-rounded experience than your average Six Flags park — and it is certainly worth a one-day visit on your next West Coast theme park trip.