Knott’s Berry Farm is easily my favorite non-Disney or Universal theme park. A big reason for that is the level of immersion you’ll find in the park’s Ghost Town section, transporting you back to an Old West town complete with a saloon, blacksmith, and stables.

The nearby Knott’s Berry Farm Hotel is a different sort of blast from the past: a trip back to a crappy 1990s hotel room.

Given my fondness for Knott’s, I had high hopes for my first stay at its on-site hotel. What I found was an experience that was not worth even the $105 Hotwire Hot Rate deal I snagged for my July 2021 trip. Several weeks after my stay, Cedar Fair announced that the Knott’s hotel would be renovated in 2022, and judging by my stay, it’s long overdue.

The property at the corner of Grand and Crescent doesn’t look dissimilar to other inexpensive accommodations in the area. Buena Park has a reputation of being much more value-oriented (to be charitable) than the more recently refreshed Anaheim Resort Area near Disneyland, and the Knott’s fits right in with its plain exterior. You could easily mistake it for a Quality Inn if it wasn’t adorned with the Knott’s name. 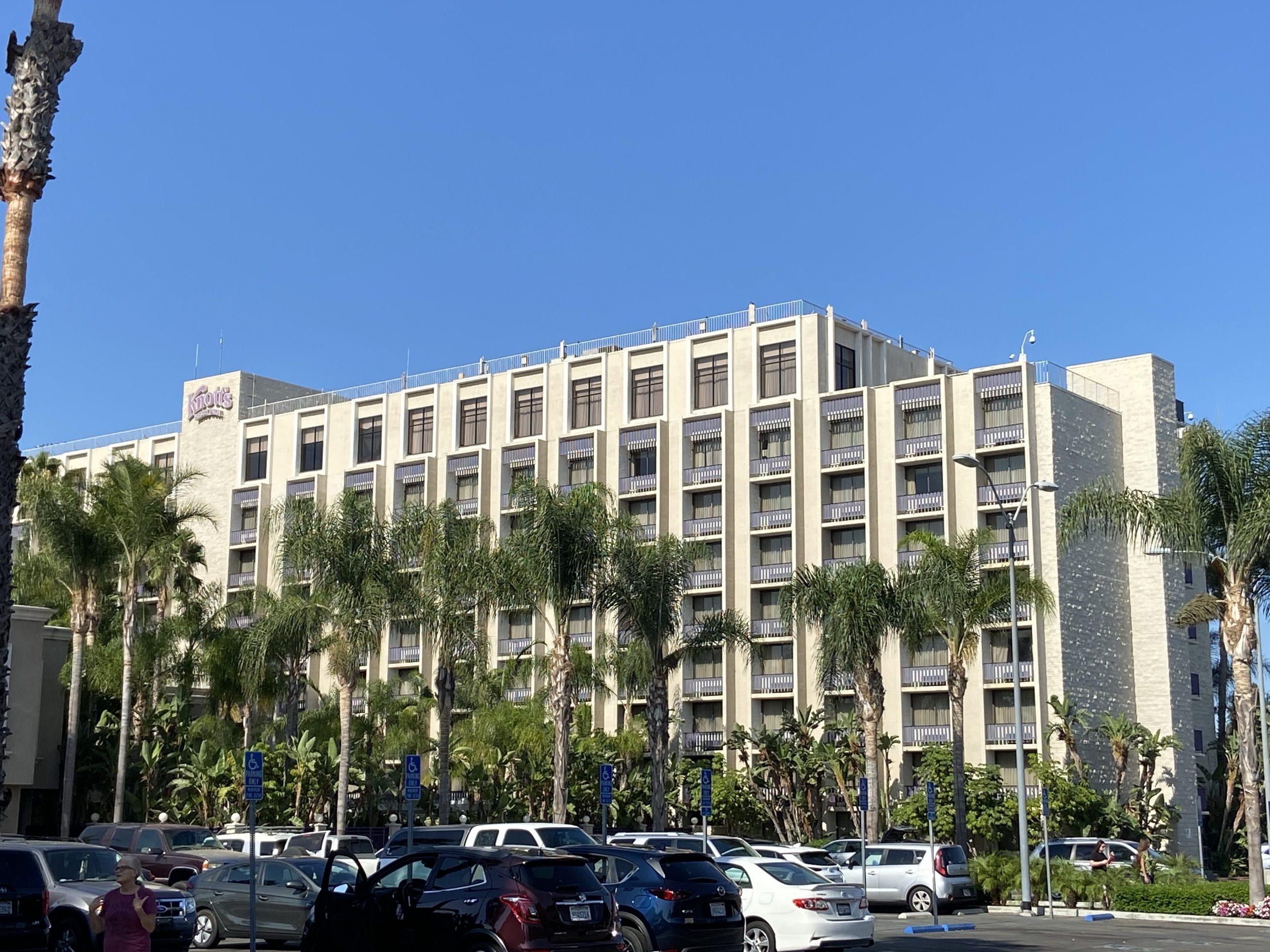 Yet that first impression was only confirmed once I got inside. Aside from the lobby area, which looks like the only thing in the hotel which has been renovated since the Clinton administration, everything else was about at the level of a $70 per night hotel.

Take the pool area. A large concrete slab with too few deck chairs and a charmless splash pad, it looks like something out of a second-rate condo complex rather than a hotel attached to a major theme park. 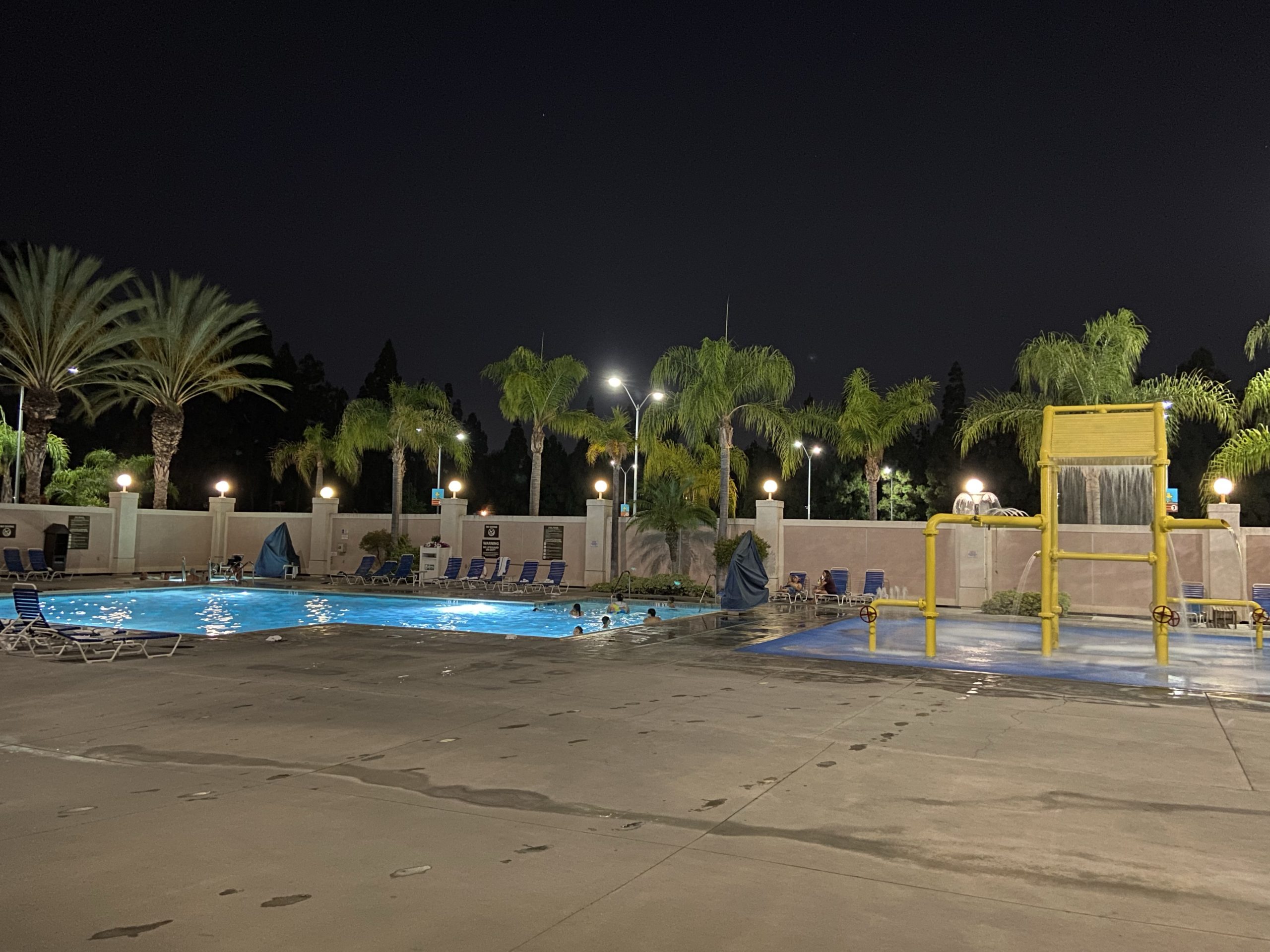 You won’t find an attached restaurant in most two-star hotels, so Amber Waves could elevate the entire property if it was a quality dining establishment. Unfortunately, my breakfast there was atrocious.

No complaints on the service, but besides a decent boysenberry-flavored coffee (true Knott’s offering right there), the rest of my meal was damn near inedible. 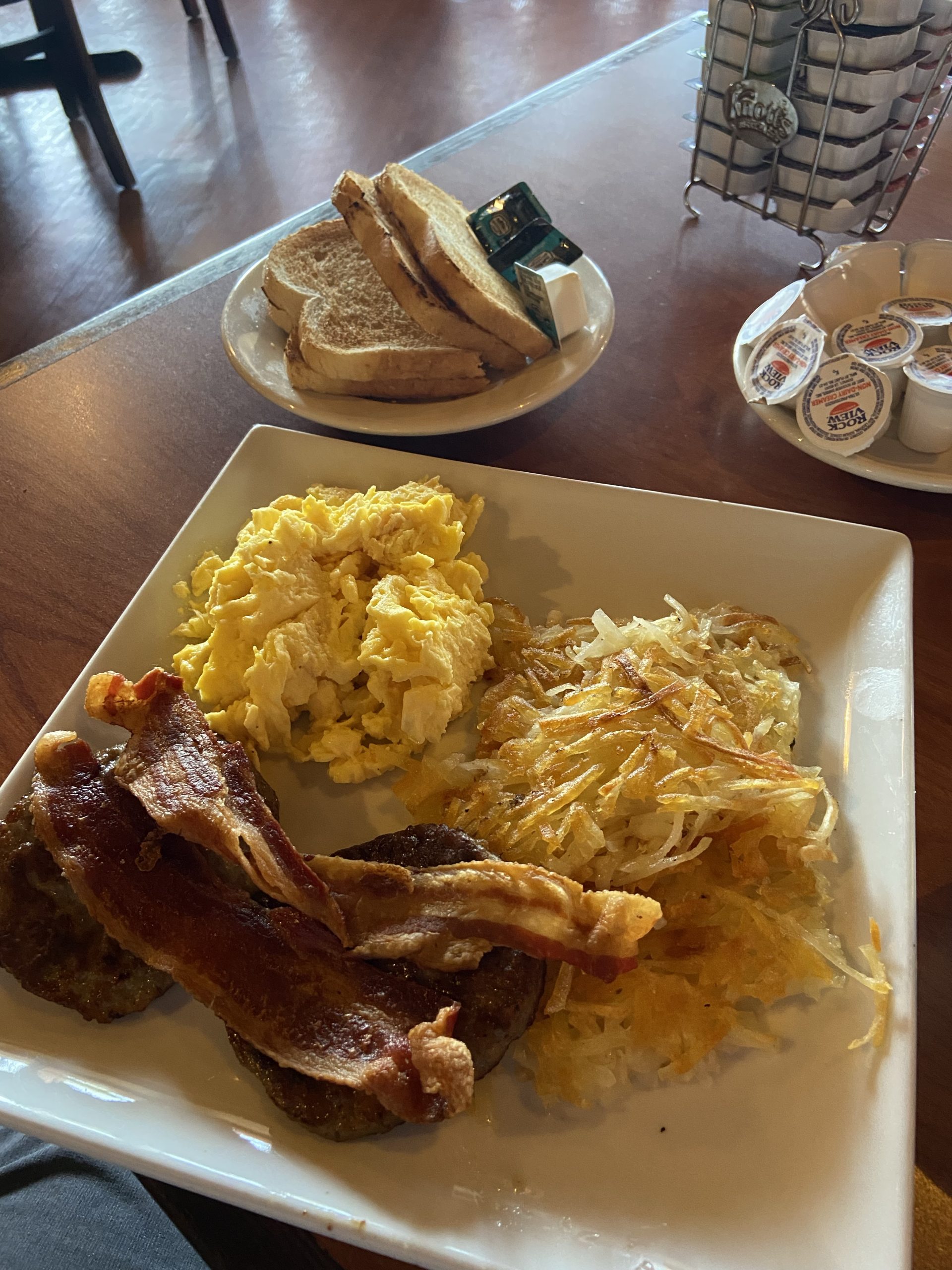 I would not call this an enjoyable combination: Eggs that tasted like they were out of a can, toast that was both stale and cold, overcooked, dried out bacon, and bland, undercooked hash browns.

You’d be much better off at Denny’s or IHOP rather than visiting Amber Waves. Offering these amenities technically puts the hotel into a 3-star tier — but what good is that classification when the amenities themselves are so disappointing?

Everything about the space felt cheap, old and rather grimy. Outdated furniture and carpet, a bland, dimly lit bathroom, and an air conditioner that belongs in a trash heap. I go over this in more detail in my room tour, but be warned, I’m not any more positive.

Proximity isn’t enough of a perk

Knott’s Berry Farm Hotel really only has one thing I can say in its favor: it’s really close to the park.

A walk from the hotel’s north door to the turnstiles takes just five to six minutes. Being able to grab a Knott’s chicken dinner to eat in your room or just take a midday break from the coasters is a pleasant perk, to be sure.

But proximity can’t be any hotel’s saving grace. The experience inside these walls was so lacking, I could conceive that it’s a conspiracy to trick hotel guests into retreating back inside the park just to get away from this dreadful hotel. In reality, it seems to be the result of putting off needed updates for years.

I sincerely hope that the renovation coming to the Knott’s Berry Farm Hotel transforms this property into something worthy of the park’s legendary brand. For now, it’s an outdated relic that you should avoid.