For coaster enthusiasts and fans of theme parks in general, there are a few parks across the U.S. that can be clearly and convincingly called elite. The best of the best. The cream of the crop.

Kings Dominion, located about 20 miles north of Richmond, Virginia, isn’t quite at that level — but it’s not far off either. 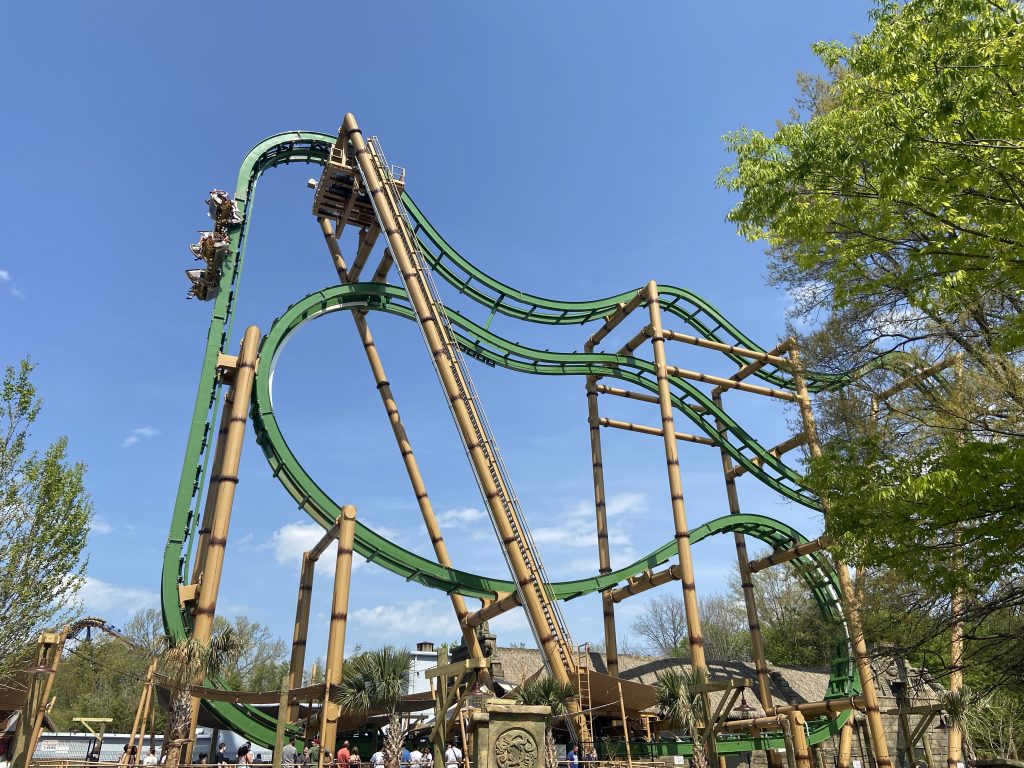 This Cedar Fair park has a lot going for it, with a varied and deep collection of coasters, a gigantic kids’ area, and even a dark ride. Its last decade didn’t see the same amount of investment as the darlings of the chain, Cedar Point and Kings Island, and that showed during my first visit to the park in May 2022. Still, it’s not hard to see the potential for something greater in the very near future here.

But that’s the future. You want to know why you should visit the park now. That’s an easy answer — yes, you should — but let’s go over the parks’ many strengths and its few weaknesses, including what I think it should add and remove from its lineup.

Like nearly all regional theme and amusement parks in the U.S., coasters are the big draw at Kings Dominion. The park features 13, a lineup that is impressively balanced between high, medium and low thrills. 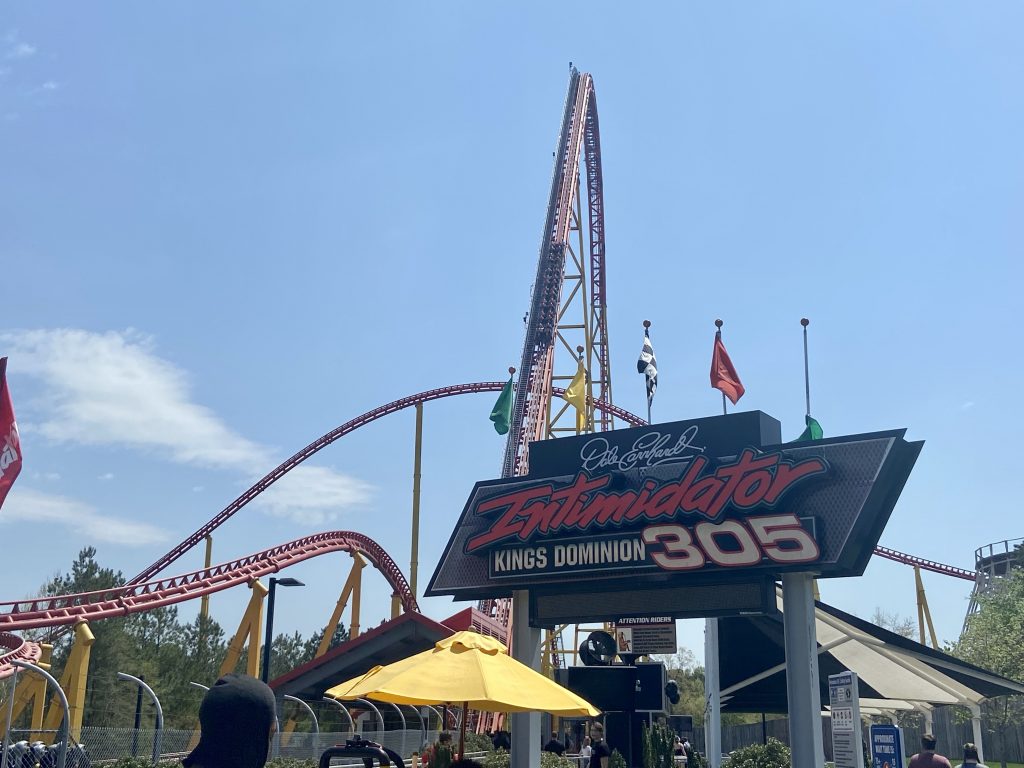 The top two are indisputably Intimidator 305 and Twisted Timbers, though which one deserves top billing can certainly be debated. For me personally, the top coaster here is I305, a 305-foot-tall beast with a 85-degree drop and a top speed of 90 miles per hour that is infamous for causing “greyouts.” 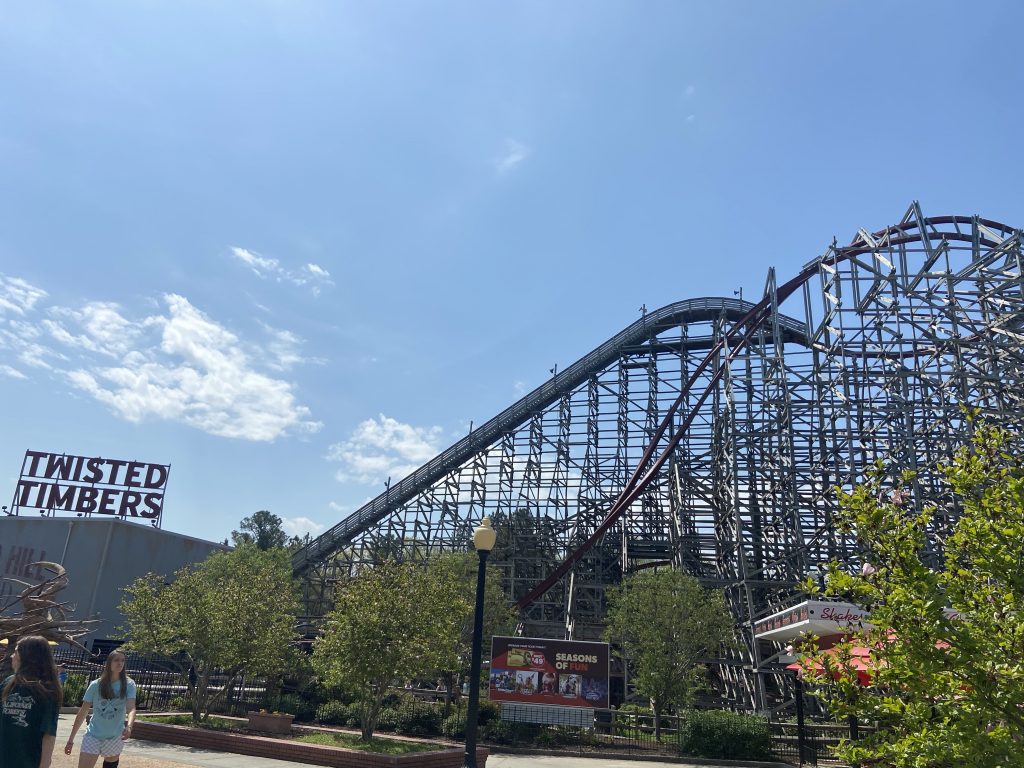 Twisted Timbers is a wood-and-steel hybrid typical of manufacturer Rocky Mountain Construction. It may be nearly 200 feet smaller than I305, but the relentless airtime and barrel roll first drop arguably make it just as thrilling.

The middle tier of the Kings Dominion coaster collection shows off its balance. Wooden coaster fans have Racer 75, Grizzly, and Woodstock Express. Flight of Fear, Anaconda, and Dominator all focus on inversions. 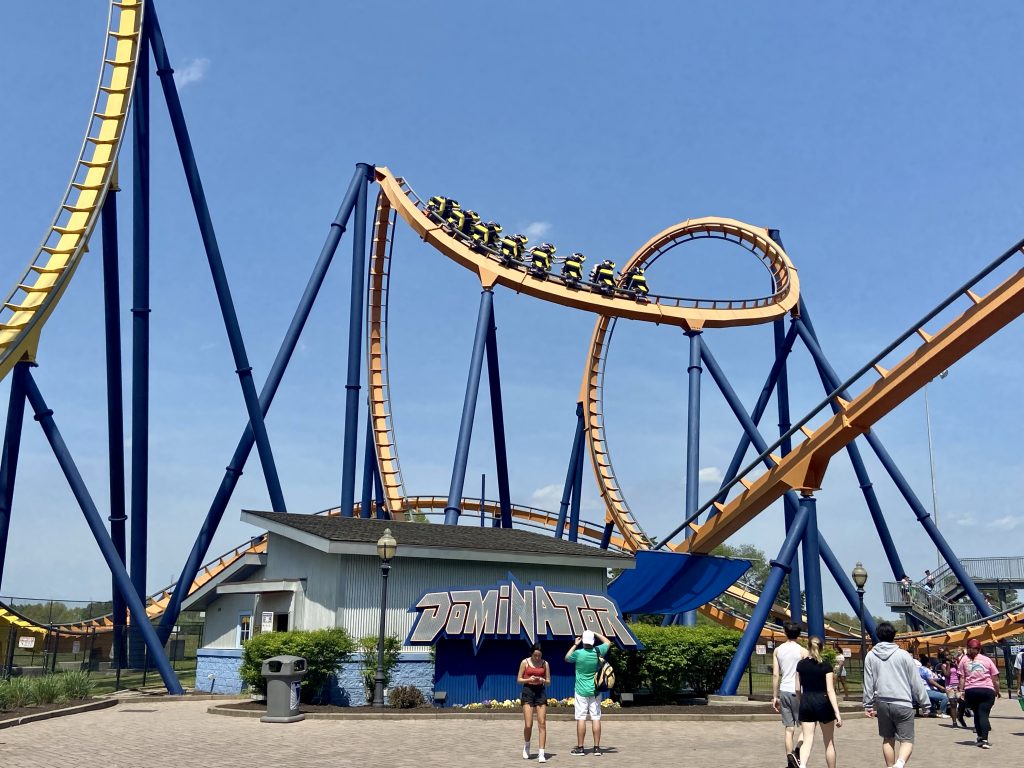 The new addition of Tumbili — only the third brand-new coaster added since Cedar Fair took over the park in 2006 — will test your equilibrium with dizzying full rotations. The park even sports one of only four bobsled coasters still operating in the U.S. with Reptilian.

That’s not to say there aren’t stinkers among this group, as you’ll find in my rankings of all 24 coasters in Virginia. Anaconda and Grizzly are both unpleasantly rough and Backlot Stunt Coaster suffers from having so many of its special effects either deactivated or removed. Still, having an excellent one-two punch at the top of the coaster lineup and a varied supporting cast makes up for the few coasters that will be one-and-done for most riders.

Be warned that some of the park’s coasters require you to put all your loose items in a locker before even entering the queue. Others have the typical storage bins at the platform for placing such items just before you board.

The inconsistency is irritating enough, but when you’re required to pay for these lockers — either $2 per ride or $10 for all-day use — it feels more like a money grab than a safety issue. I doubt the park will change their policy over my gripes, but when every guest is going to have something in their pockets and be forced to use these lockers, find a way to make them free like Universal Orlando did. 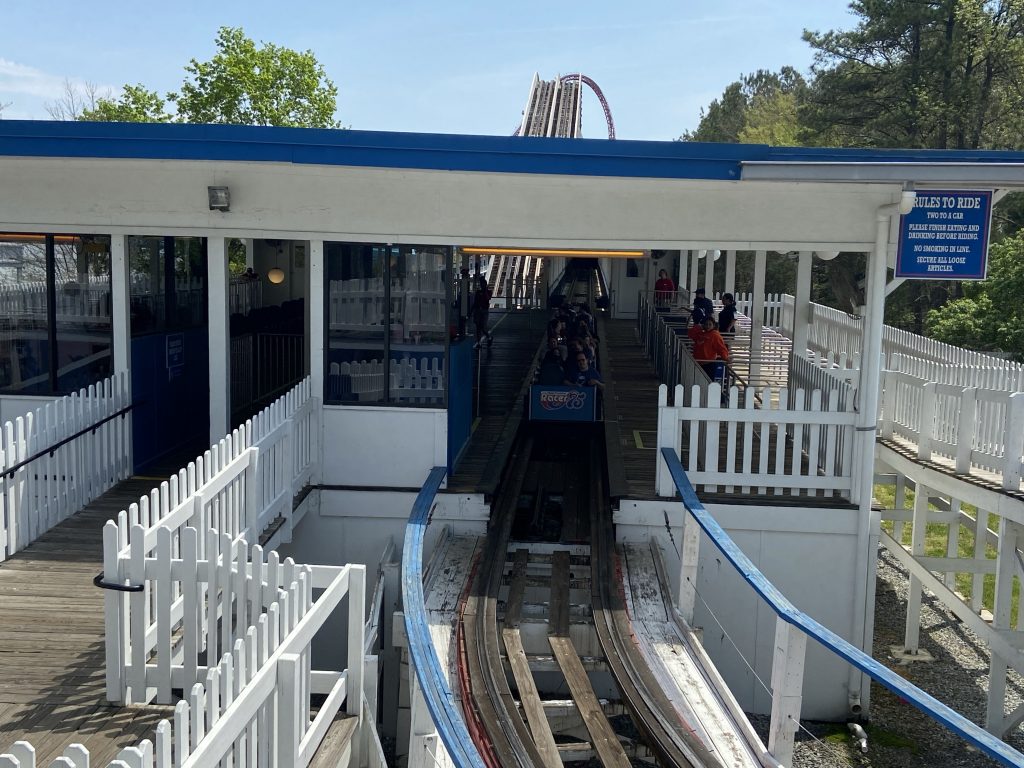 One last note about the park’s coaster lineup. Being located about a one-hour drive from Busch Gardens Williamsburg, Kings Dominion seems to make a conscious decision not to build coasters that are too similar to its regional rival, and vice versa.

That may somewhat limit the park’s options for future additions, but for us visitors, it’s nothing but positive. Not only will the parks be motivated to continue investing in new rides, but you can visit these parks on back-to-back days (like I did) and the coaster experiences won’t get repetitive.

Kings Dominion offers the largest Planet Snoopy kids area in the entire Cedar Fair chain. The 14-acre land sports 20 rides, most of them small flat rides, along with a few small stage shows featuring the Peanuts characters. These attractions aren’t going to impress coaster lovers, but it gives families with small children a lot to do on their visits. 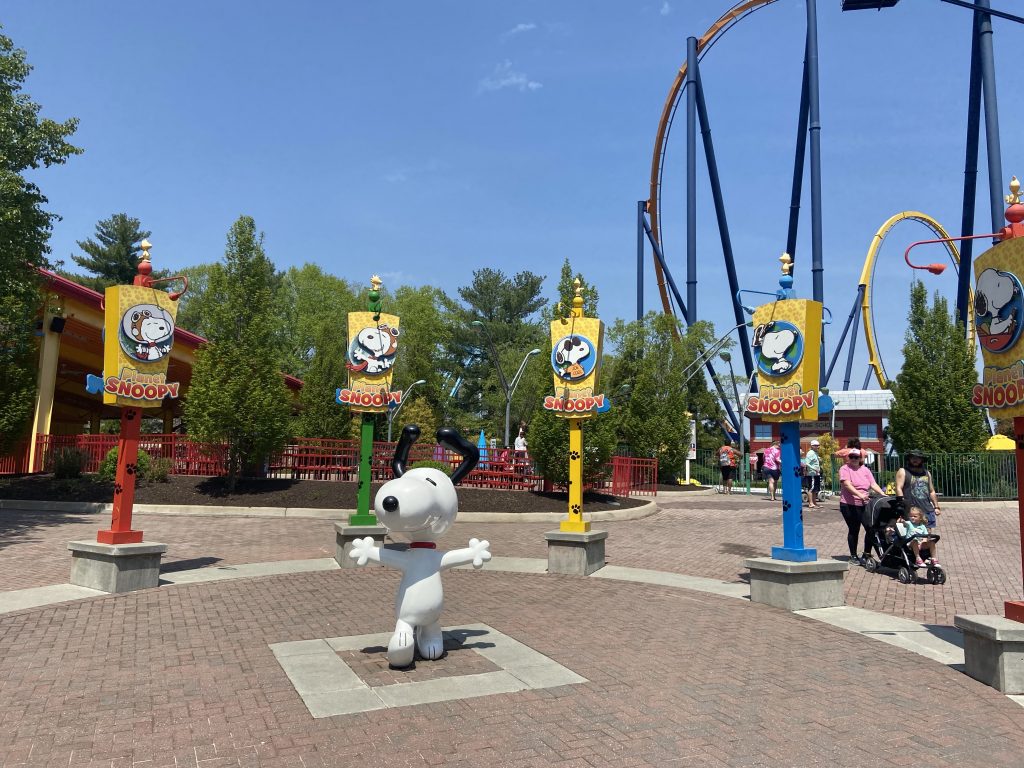 Planet Snoopy also features the park’s only dark ride, the interactive shooter Boo Blasters on Boo Hill. Originally opened as Scooby-Doo’s Haunted Mansion in 2010, the ride has you using laser guns to shoot targets on painted flats. You won’t find any animatronics here.

It’s simplistic but still fun enough to warrant a ride, though tying this to a recognizable intellectual property — or original characters, like the newest interactive ride at Knott’s Berry Farm — would both attract more guests and sell more merchandise, in my opinion.

The two water rides (outside the water park, which I did not visit) are both located on the west side of the park in the Old Virginia section. Both Shenandoah Lumber Company (an Arrow log flume dating to the park’s opening) and White Water Canyon (1983 Intamin river raft ride) are enhanced by their woodsy setting, placing them slightly ahead of similar Cedar Fair water rides.

You will find the park’s biggest flat rides, like the 300-foot-tall WindSeeker and Drop Tower: Scream Zone, in Candy Apple Grove, a section dating back to the park’s second season. 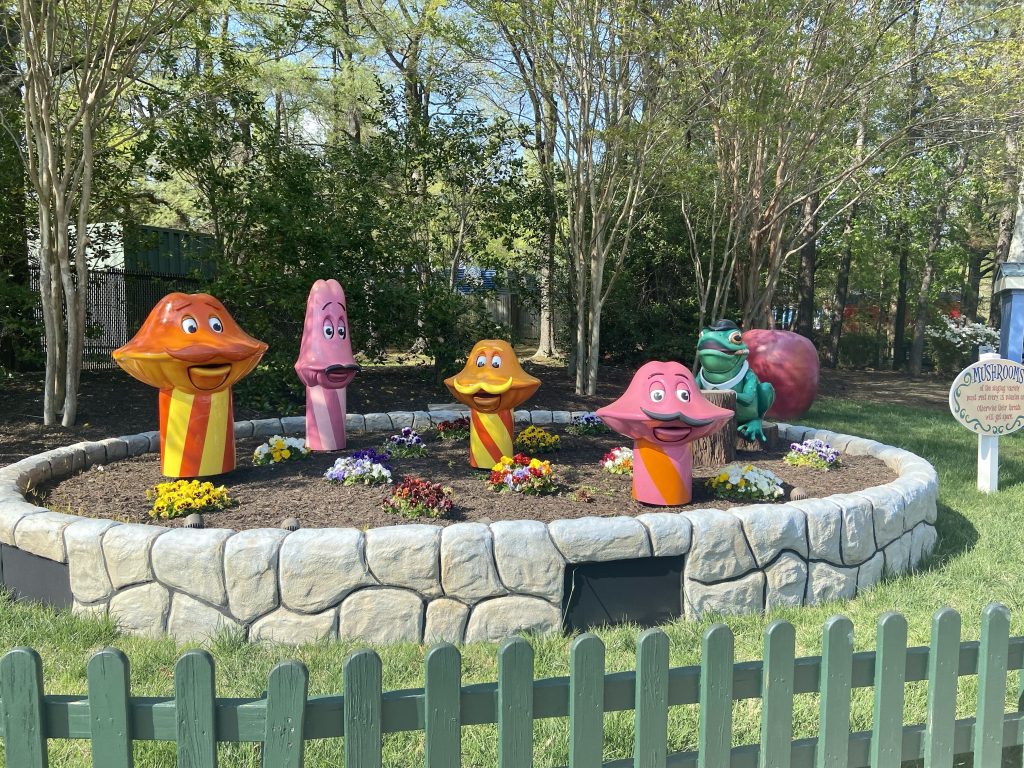 This is also where you can find the Singing Mushrooms animatronics crooning barbershop quartet songs three times per hour. It’s a minor diversion, to be sure, but it’s also a rare and welcome instance of a Cedar Fair park using animatronics, as well as honoring a park’s pre-Cedar Fair history.

Like other Cedar Fair parks, the theming at Kings Dominion is inconsistent and not attempting to be immersive. However, the new-for-2022 Jungle X-Pedition is shaping up to be one of the better themed sections in the chain outside of Knott’s Berry Farm (if you ignore how park maps inexplicably list Backlot Stunt Coaster, Flight of Fear and Intimidator 305 as being part of that section). 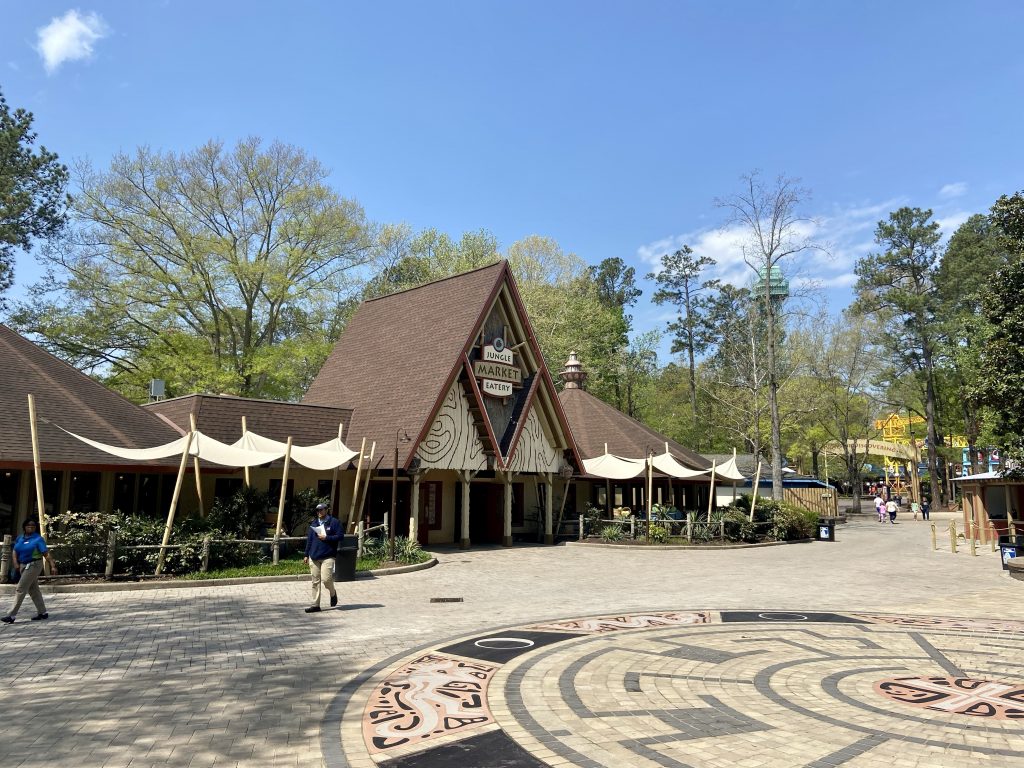 Jungle X-Pedition was still a work-in-progress during my visit and needs another major attraction, but even the unfinished effort to provide an original backstory to the land should be appreciated.

It would be impossible to judge most of the park’s food offerings in a single-day visit unless I grew a few more stomachs. My one meal in the park was just OK.

In my experience, Cedar Fair parks generally have better food than Six Flags, but your options are still some akin to some sort of fast food and snacks. Kings Dominion has plenty of pizza, chicken tenders, burgers, fries, etc., the kind of dependable options that will quickly satisfy most kids. 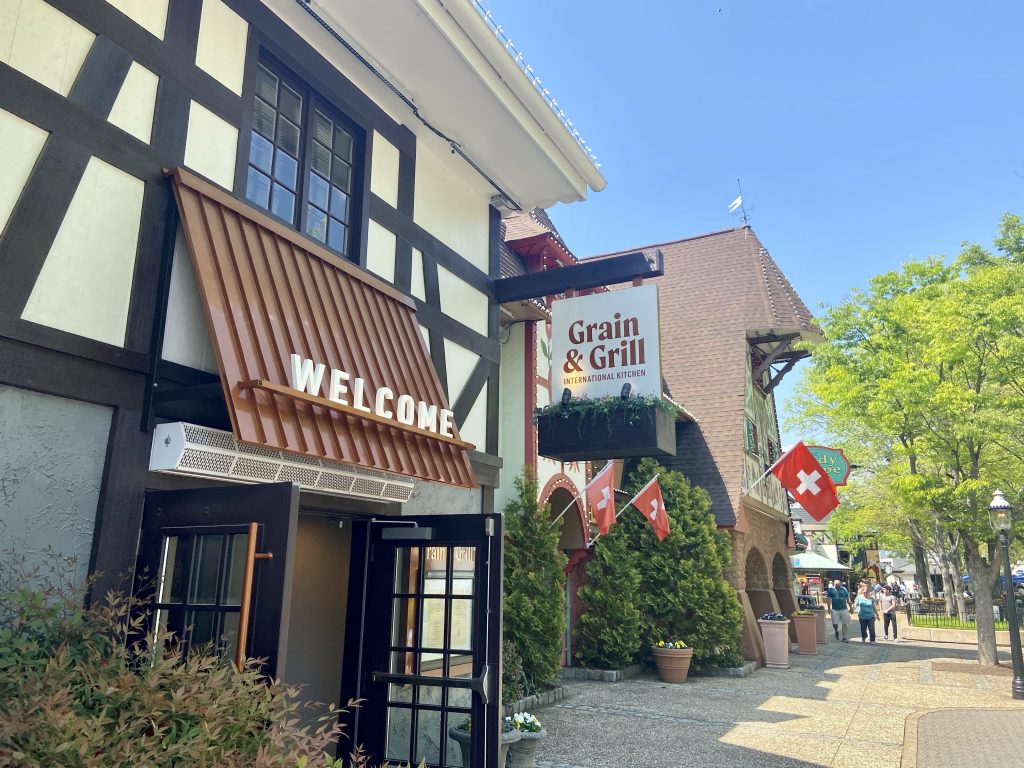 I went with a recommendation to go to Grain & Grill at the end of International Street, where the options include steak, garlic and herb shrimp, and hoisin pork with sides like scalloped potatoes au gratin and Adobo mac and cheese. 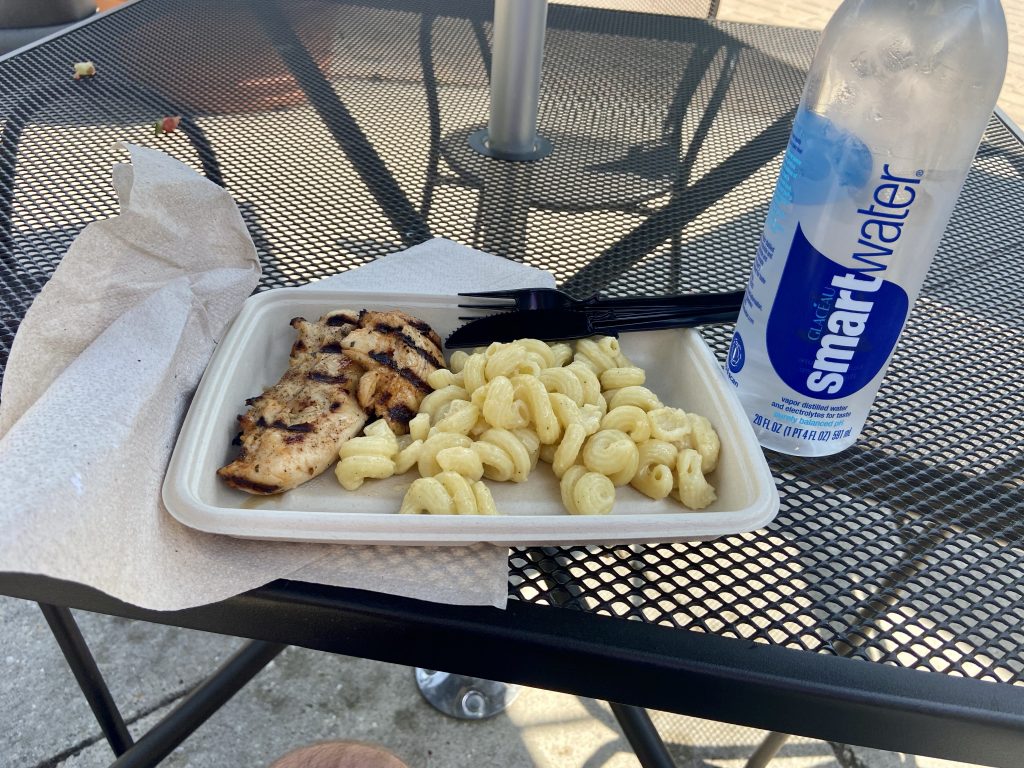 I picked garlic and herb chicken with the mac and cheese. The chicken was fresh off the grill, juicy and flavorful, which is probably not going to be your experience once it’s had some time to dry out under heat lamps. The mac and cheese, by contrast, was decidedly not fresh and tasted like it. I could’ve eaten another helping of that chicken, but most of the side dish ended up in the trash.

I give Kings Dominion and Cedar Fair points for offering something different than the typical theme park fare, but don’t come here just for the food.

I regret not getting to this park before Volcano: The Blast Coaster closed in 2018. Being not only the first inverted launch coaster, but one running in and around a mountain, it gave Kings Dominion a truly one-of-a-kind ride. The park’s remaining lineup still stands on its own, but the hole left by Volcano has yet to be filled. I mean that literally, as its former footprint remains vacant. 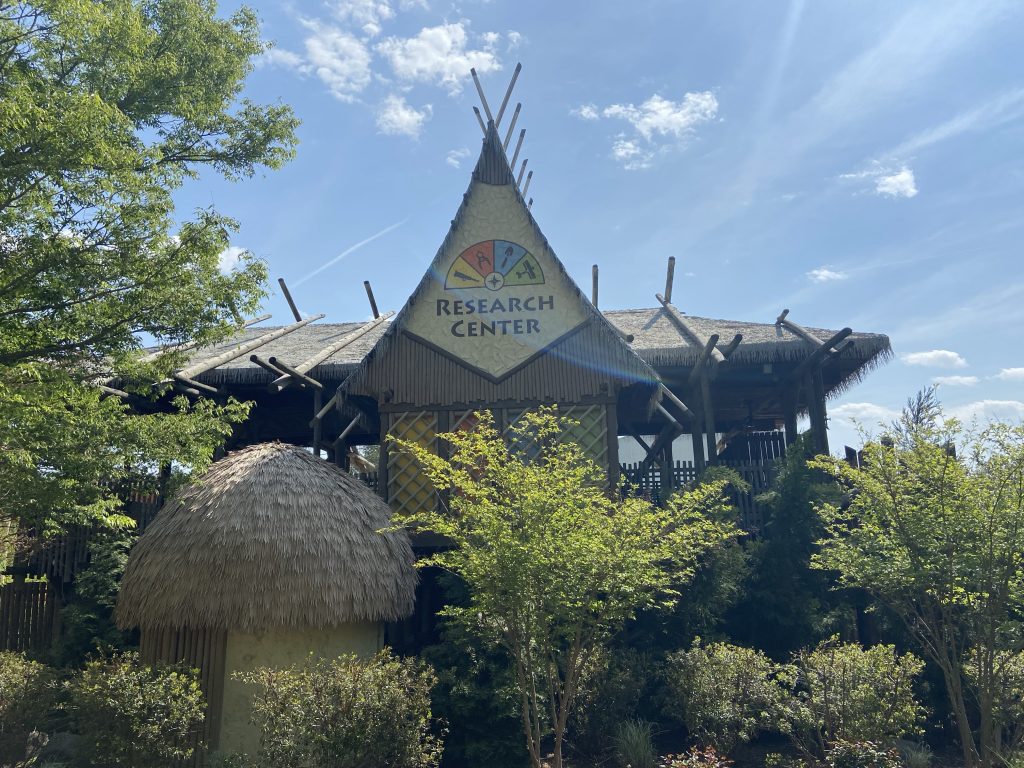 KDFans.com reported in 2019 that the Volcano plot could be taken over by a wing coaster. Practically speaking, that addition makes a lot of sense — the closest wing coaster is Dollywood’s Wild Eagle — but it also feels like an overly safe choice. I want Kings Dominion and Cedar Fair to think bigger.

The park does have an interactive dark ride, the previously-mentioned Boo Blasters, but lacks any other large-scale family attraction, even a transportation ride. There is the Eiffel Tower acting as an observation deck, but this was closed during my visit.

I readily admit this is wishful thinking, but the Cedar Fair chain could utilize Peanuts IP for some sort of dark ride that could be copied throughout the chain, including Kings Dominion. It would add variety to lineups that are almost entirely coasters and flat rides.

What needs to go

The most obvious choice for removal is Anaconda. 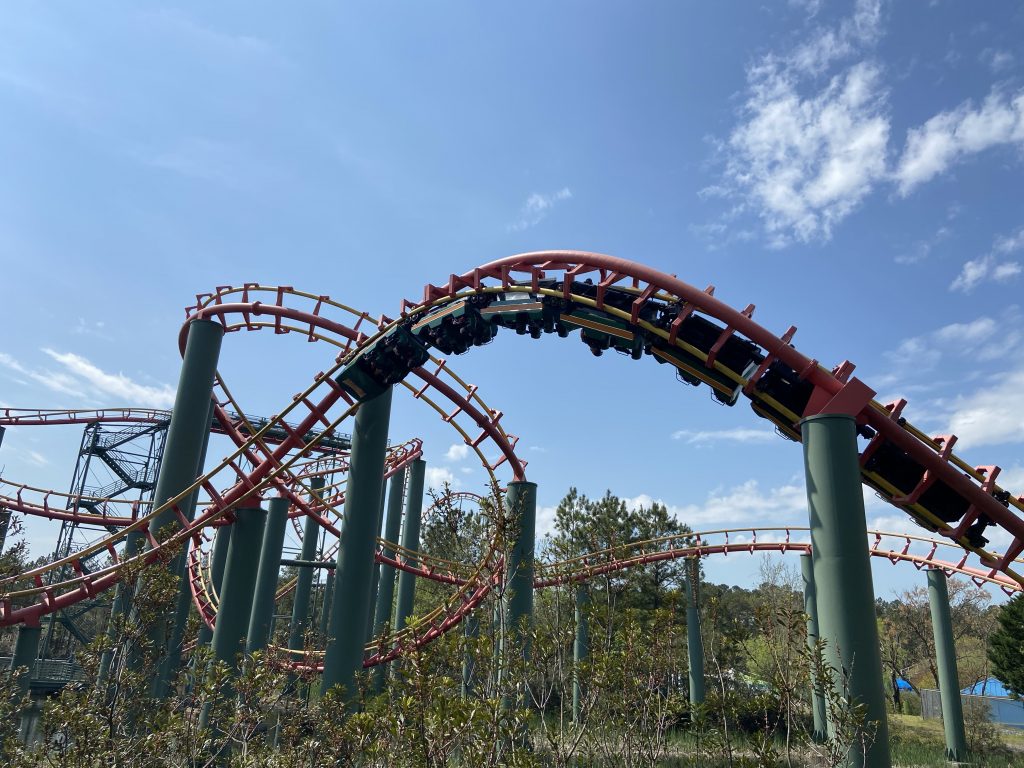 As I discussed in my Virginia coaster rankings, I am no fan of old Arrow loopers banging my head around through awkward transitions. Anaconda’s second half has perhaps the worst transitions I’ve seen on a coaster. Its only redeeming factor is the lake setting, and I can appreciate that more with a better ride.

Kings Dominion is an easy recommendation for any theme park and coaster fan. The coaster lineup is well-balanced, with two standouts that are worth the price of admission on their own, and families will find plenty to do with the enormous Planet Snoopy and the Boo Blasters dark ride. And you can easily pair it with a visit to rival Busch Gardens Williamsburg for a compact, enjoyable coaster weekend. 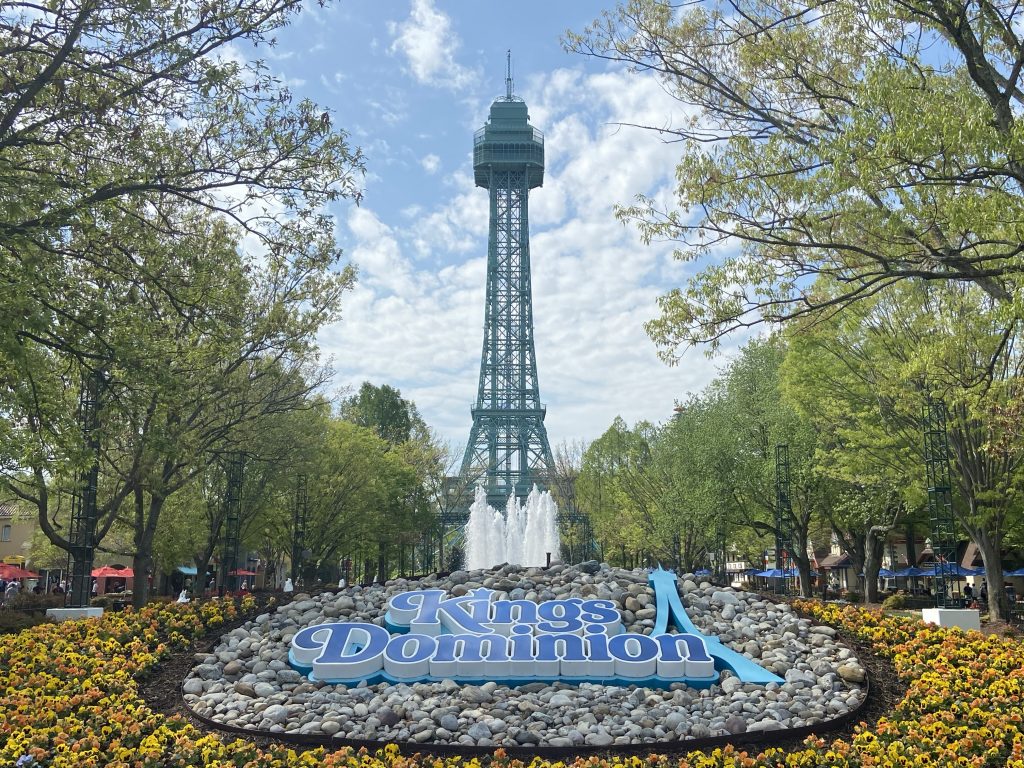 What holds me back from giving the park an “A” grade is a few minor complaints. Namely, some of the supporting coasters could use some refurbishment or replacement, and what I saw of the park’s food options still left something to be desired despite recent improvements.

Those quibbles are probably an extension of being treated like a second-tier park for most of its first decade under Cedar Fair’s ownership. That’s no longer the case, and with continued investment — and especially with a major, innovative replacement for the lost Volcano — Kings Dominion could easily become one of the elite U.S. coaster parks. But even as it stands today, it’s still worth a visit.

DISCLOSURE: This review is based on my own opinion and perspective. I paid for my own park tickets to Kings Dominion and was not granted any special access, nor was the park or its staff aware that I was conducting a review.