In 2018, Universal Orlando’s new addition was Fast & Furious: Supercharged — yet another screen-based attraction at a resort already too dependent on simulators, and quickly maligned as the worst of the bunch.

Eight years removed from the Wizarding World of Harry Potter’s revitalization of Universal theme parks, fans wondered whether the ride designers at Universal Creative recognized its screen-heavy dilemma,  and what, if anything, it may do to address the issue.

I called Hagrid’s Magical Creatures Motorbike Adventure the best ride at Universal Orlando when it opened in 2019, as it eschewed screen-based effects (outside the pre-show) for an immersive physical environment combined with jaw-dropping coaster tech. Considerable technical headaches aside, the ride set a much higher standard for themed coasters, while still appealing to families.

Two years later, another Jurassic World VelociCoaster, shows that themed coasters can not only deliver on thrills, but be thrilling enough to wow even the most cynical and demanding coaster enthusiast.

The entrance and queue

One of the premature criticisms of this Intamin launch coaster was the mistaken belief that the attraction’s visible coaster supports and proximity to other structures would ruin any sense of immersion. Nevermind that Disney has built roller coasters out in the open multiple times (and then been bashed by those fans when putting other coasters in large buildings that, of course, are visible), these scolds were convinced this would ruin the waterfront of Islands of Adventure.

Nothing could be further from the truth. 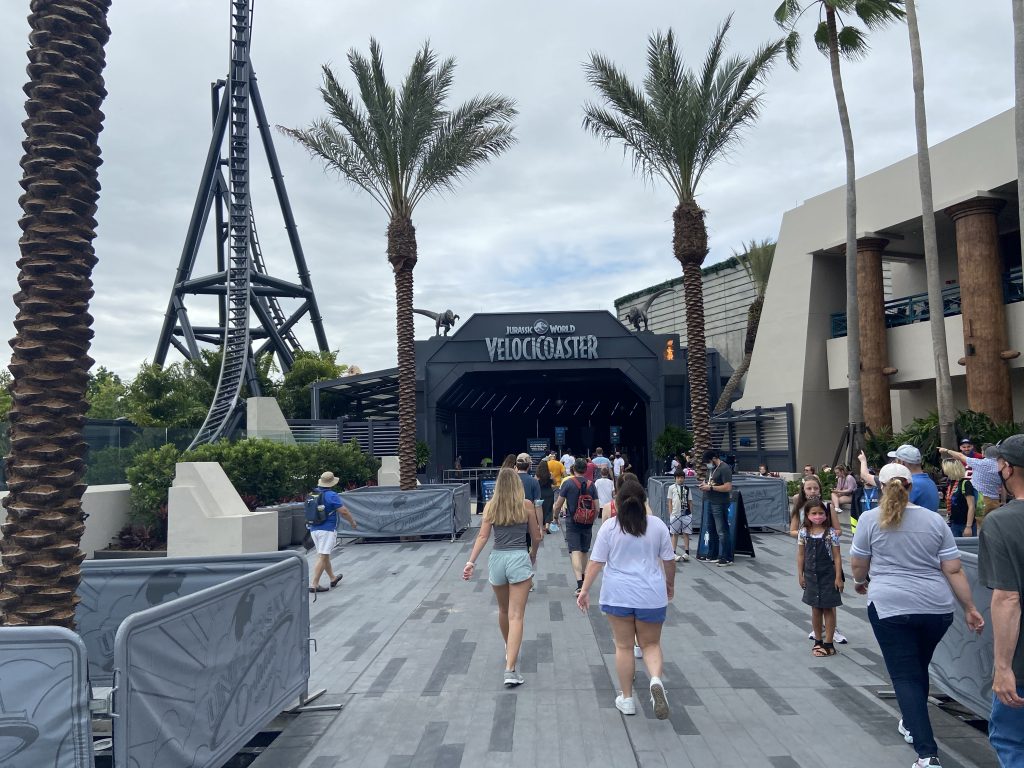 Walking up to the best coaster in Orlando (Theme Park Tribune)

This gorgeous coaster is plainly visible to guests from around the park’s lagoon, but the waterfront area is now only more beautiful for having an extremely intense coaster weaving through it, along with new decorations and raptor statues. It greatly enhances the appeal of an area that previously offered a quiet stop to sit by the water, and frankly didn’t provide much of a reason to venture out of the Jurassic Park Discovery Center.

The first part of the queue is nothing spectacular, simple switchbacks leading up to a large statue of a raptor pack.  Longtime “Jurassic Park” fans will get a kick out of the return of Mr. DNA, the animated character from the original Steven Spielberg film, who delivers the safety guidelines and explains the locker process. 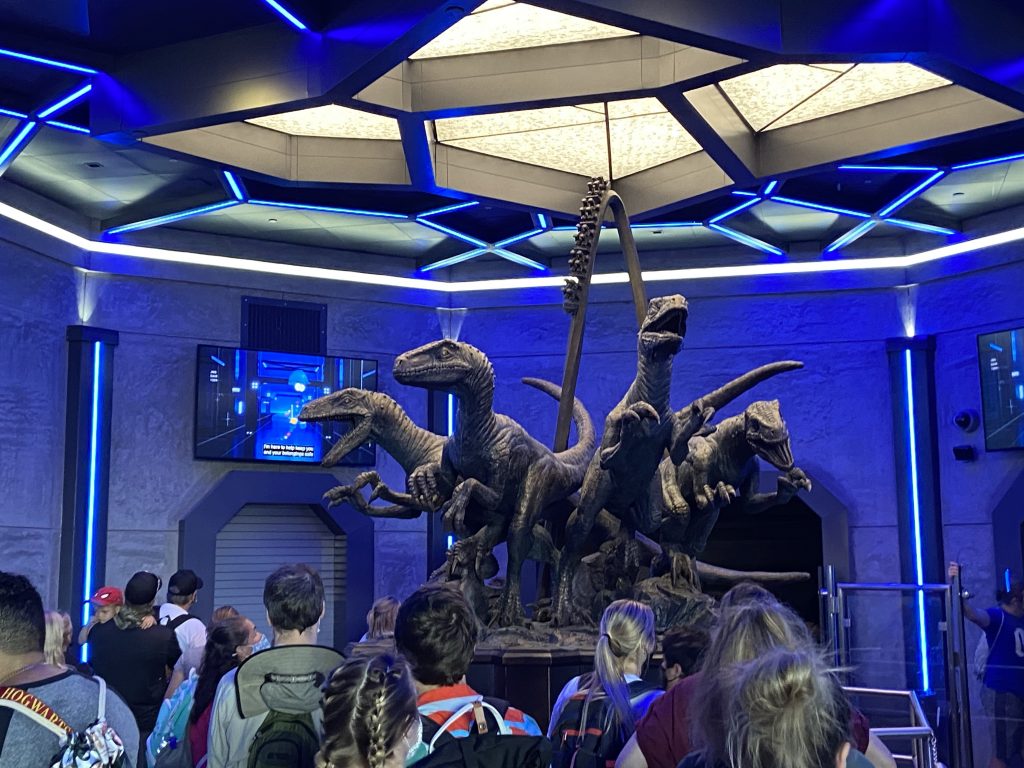 For tried-and-true Universal fans — or just anyone who appreciates good design — the new locker setup used in VelociCoaster is a brilliant change. Rather than having to store all your loose items before you even enter the queue, you’ll hang onto those items (including your precious phone) until just a few minutes before boarding. Better yet, the lockers are double-sided, meaning you’ll retrieve those items from a different room after getting off the ride by using your park ticket or pass.

One suggestion here: I’d highly recommend either wearing pants or shorts with a zippered pocket to protect that ticket while you’re riding, or ask a Universal team member for a locker pass. The intensity of this ride means nothing is absolutely safe in a pocket, and better to lose a paper locker pass than a ticket that’s more difficult to replace. Second, the single-rider line’s lockers are

Later rooms of the queue offer Easter Eggs from the series, like a book credited to Jeff Goldblum’s Dr. Ian Malcolm and Sam Neill’s Dr. Alan Grant, as well as some truly terrifying animatronics of raptor heads in harnesses. These figures are so convincing in their angry breathing and darting eyes that even though they’re just out of arms’ length, you won’t even try reaching out for fear of losing an arm. In an example of using screens effectively, you’ll even see raptors projected onto a window looking out at one of the ride’s two launches.

The theme of VelociCoaster is that Jurassic World put a roller coaster in its raptor paddock.

No, seriously, that’s it. And it totally works.

The final room of the queue features “Jurassic World” stars Chris Pratt and Bryce Dallas Howard bickering over the safety of the ride, with Pratt imploring guests to turn around and leave for their own well-being. A flabbergasted Pratt eventually jokes, “I tell them the raptors are dangerous, they say, ‘Put a roller coaster in the paddock.’ What could go wrong?’”

This simple solution to the question of “Why does this ride exist?” fits perfectly with the “Jurassic” franchise. This is a place which had the hubris to resurrect dinosaurs, genetically engineer smarter ones, and create a whole theme park around them — even after the first attempt resulted in multiple deaths and having to abandon the island. Of course they would build something this stupid and dangerous and figure everything would be OK in the end.

Coaster enthusiasts always revel in coasters that allow you to feel their intensity without being too restrained or “stapled” into your seat. Even as someone that coaster fans might dismissively call a “GP” — and really, never use that term — for only having a coaster count in the 60s, VelociCoaster’s use of only a lap bar restraint is essential to the experience. 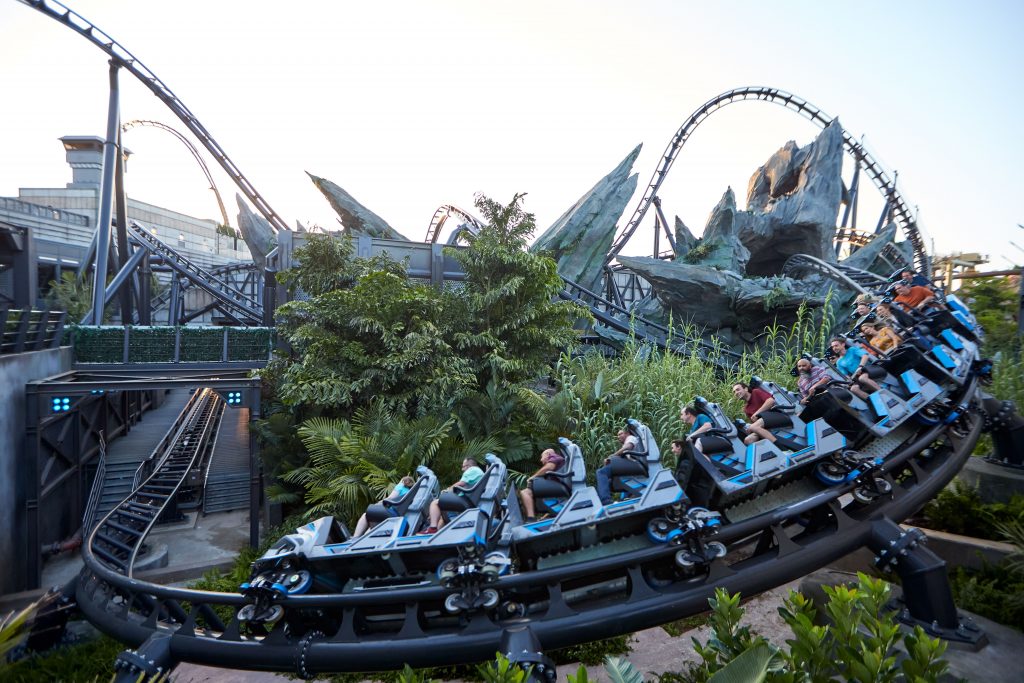 The first half of VelociCoaster heading into the second launch (Universal)

The coaster’s first launch hits 50 miles per hour,  sending you through a spaghetti bowl of track and head-chopper moments around rock formations, waterfalls, landscaping, and raptor statues. A mild criticism here is that even some low-movement animatronic raptors would have enhanced the experience for repeat rides, but you’re moving so fast you’ll barely notice. Really, you’ll be too busy hanging on, because the combination of speed, tight turns and only having a lap bar make you feel nervous about even putting your arms up. 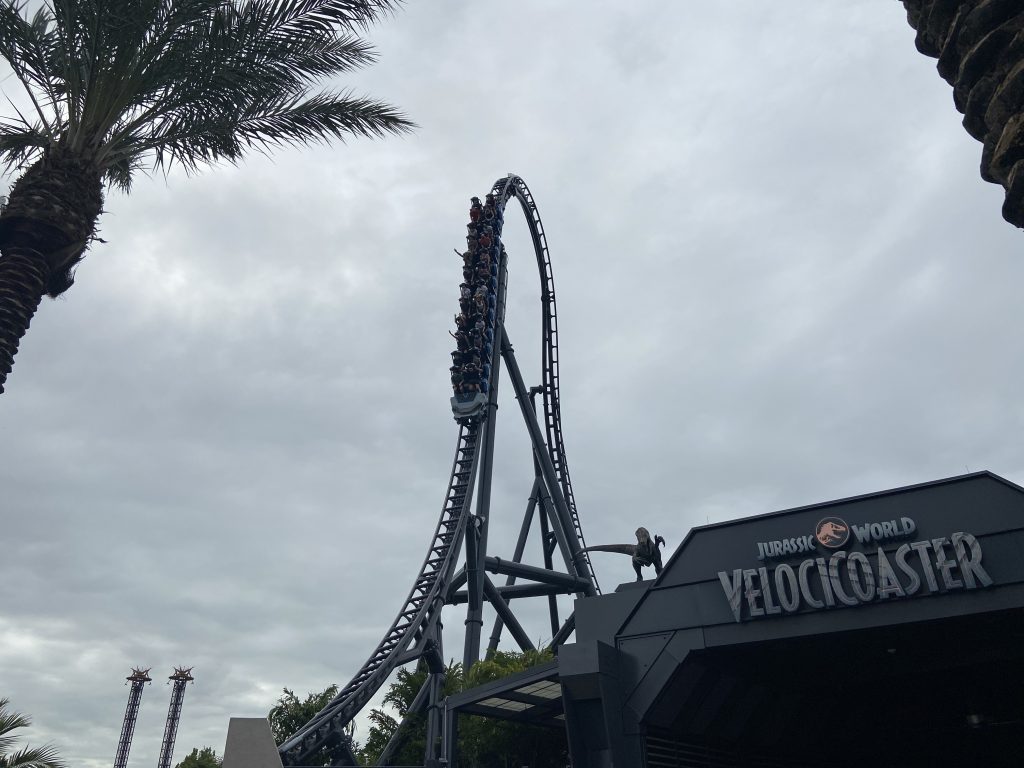 Coming down from the top hat (Theme Park Tribune)

The second launch hits 70 miles per hour in 2.4 seconds, and sends you up a 155-foot-tall top hat. That lovely airtime moment is followed by an 80-degree drop careening past the waterfront and ride entrance towards the best element on the ride: the 100-foot-long stall. 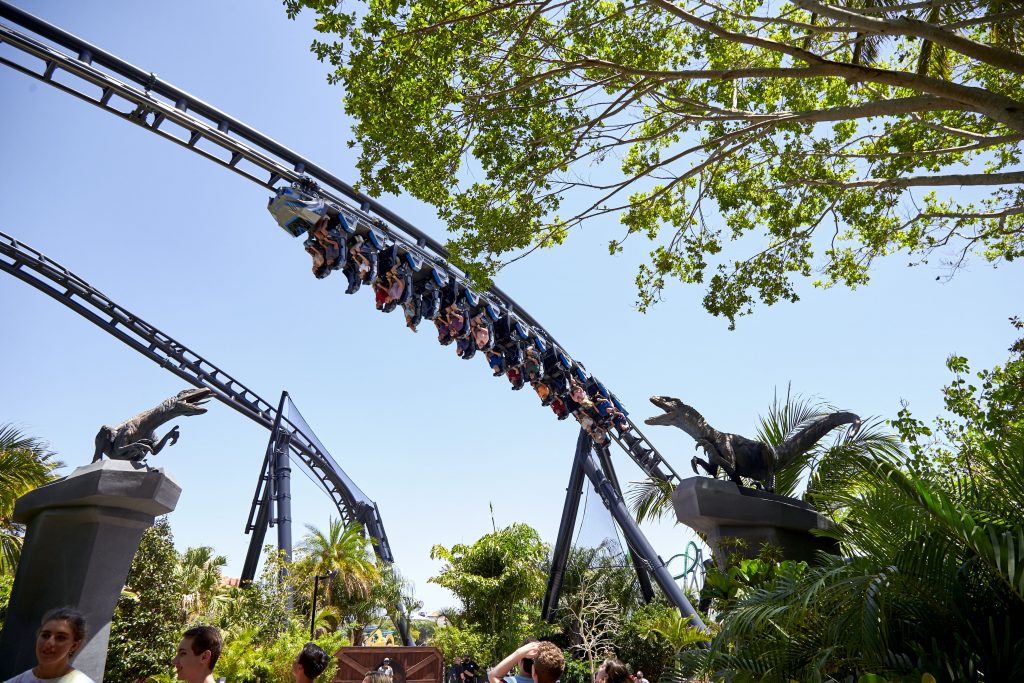 If you’re only a casual coaster fan, you may think that inversions of a coaster are largely limited to longer loops or faster corkscrews, where you’re not fully upside down for long. On this part of VelociCoaster, your butt will absolutely come out of your feet for a brief zero gravity moment, enhanced by how the coaster tosses you to one side on the entry and exit to the stall. 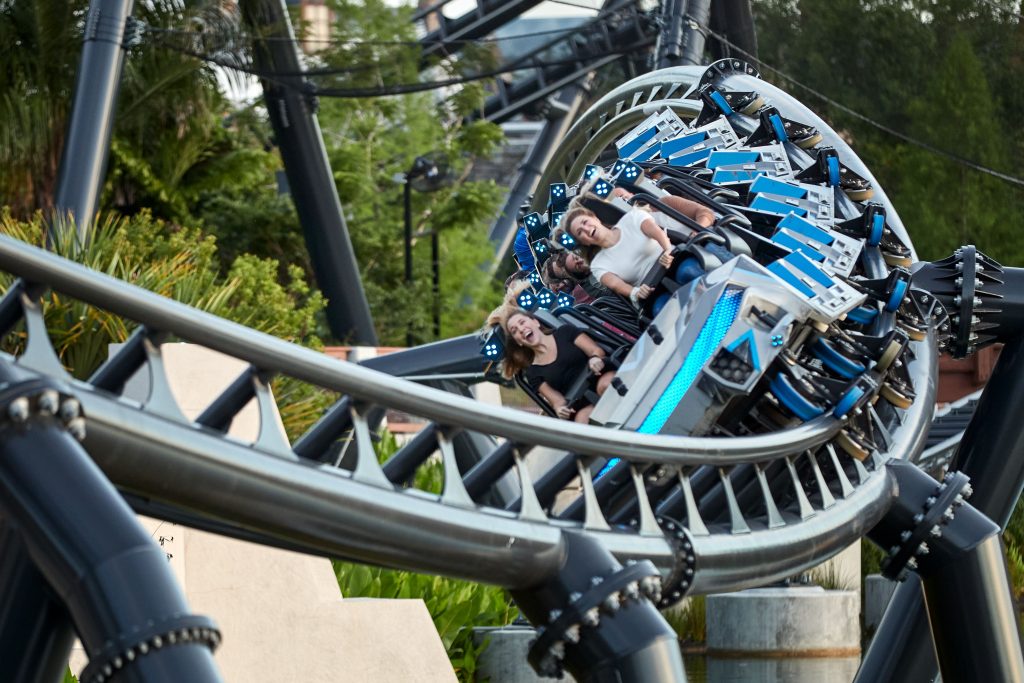 You’ll then enter a series of wave turns, with some more airtime elements thrown in, before hitting the grand finale. The “mosasaurus roll” is the ride’s last inversion, a version of a 360-degree barrel roll, called a heartline roll by coaster enthusiasts, throwing your butt out of the seat one last time, and doing it just above the Islands of Adventure lagoon.

A new king of coasters?

The sheer intensity of VelociCoaster, combined with its environment and perfectly simplistic setup, has led to almost uniformly positive reviews from riders. I won’t be bucking the trend; even as someone who values highly-themed, technologically-advanced dark rides like Star Wars: Rise of the Resistance or The Amazing Adventures of Spider-Man over extreme thrills, I absolutely love this attraction.

The only real debate about VelociCoaster is over how highly it should be ranked.

Is it the best ride at Universal Orlando? That may be a matter of taste, as this and the neighboring Hagrid’s are very different experiences, despite both being launch coasters built by Intamin.

Is it the best coaster in Orlando? I’d say yes. Nothing at Disney World comes close to this level of thrill, and while SeaWorld Orlando may offer its own airtime- and inversion-filled delights like Mako and Kraken, they can’t match VelociCoaster when judged as an overall experience.

DISCLOSURE: This review is based on my own opinion and perspective. I paid for my own park tickets. Universal did not grant me any special access to the park or to Jurassic World VelociCoaster to conduct this review.