The best roller coasters are worth waiting for.

No, I’m not not trying to start a line of “live laugh love”-style Target wall art for coaster enthusiasts. I’m just talking about Iron Gwazi at Busch Gardens Tampa Bay.

This latest creation from wood-and-steel hybrid coaster makers Rocky Mountain Construction was supposed to open in 2020. In fact, testing had begun just before COVID-19 upended the world. The SeaWorld chain opted to leave it completed but closed for two years, practically taunting coaster enthusiasts while only increasing the ride’s hype.

Maybe that strategy paid off. Or maybe I just didn’t care about the delay once I experienced one of the best coasters in the country. 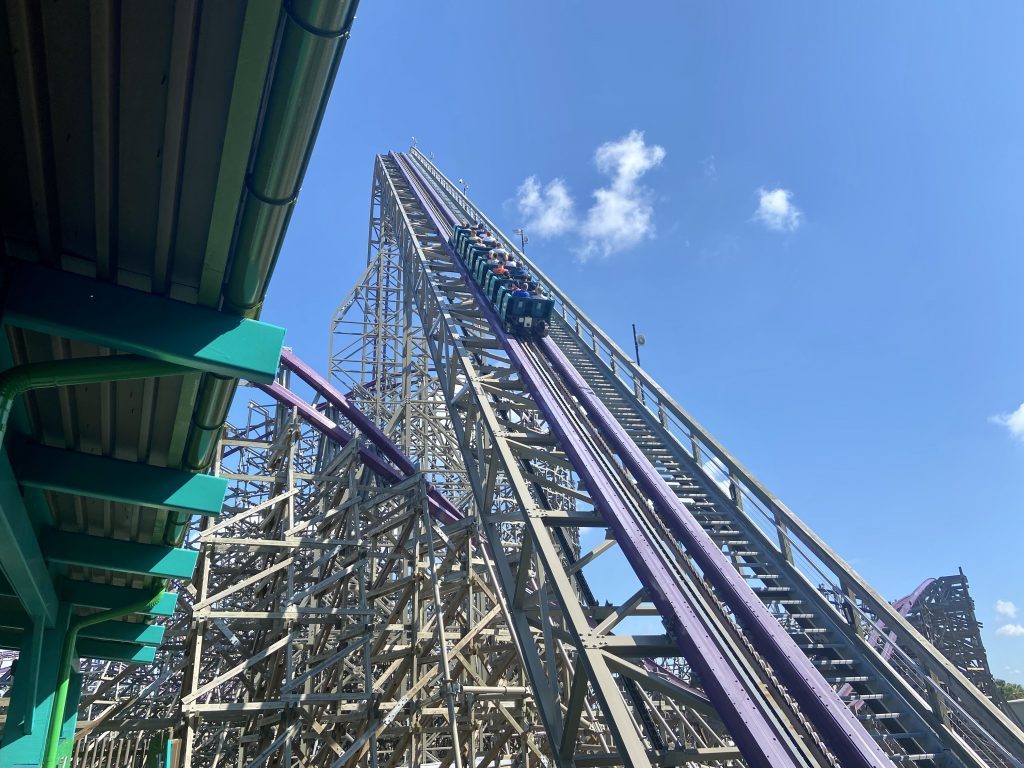 Iron Gwazi is a breathlessly-paced thrill machine, even by the high standards set by RMC. The near-constant airtime and variety of elements make this a can’t-miss attraction for anyone coming to Central Florida.

In a break from my past reviews, I’m not factoring in the queue, since it was clearly not meant to be highly-themed like you’d expect at a Universal or Disney park. 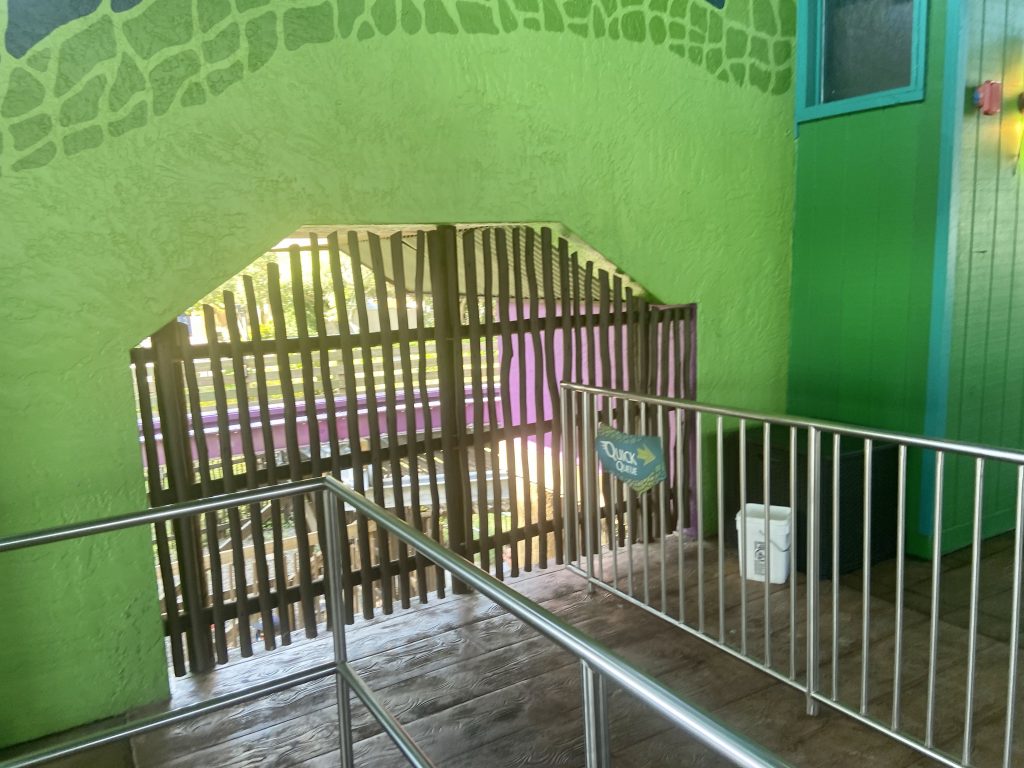 It is worth noting that the remnants of the original dueling Gwazi can be seen at the load platform as the gap where the second track exited the station is still there.

To sum it up in one word, Iron Gwazi is relentless.

Starting from that 91-degree, 206-foot first drop, the ride doesn’t give you a moment to catch your breath until you hit the brakes about 45 seconds later. Of course that first drop flings you out of your seat, but the negative g-forces are just beginning.

The ride boasts a total of 12 so-called “airtime points,” and these are not cookie cutter elements, either. Take the first element after the first drop; instead of a typical overbanked turn, Iron Gwazi combines an overbanked turn, an outward-banked airtime hill and a dive back inward under the ride’s structure. Separately, coaster veterans have seen these elements before, but delivered in such rapid succession will thrill even the most jaded enthusiast.

Same goes with the ride’s “death roll.” This barrel roll drop is similar to the first drop on other RMC coasters, such as Twisted Timbers at Kings Dominion or Storm Chaser at Kentucky Kingdom. 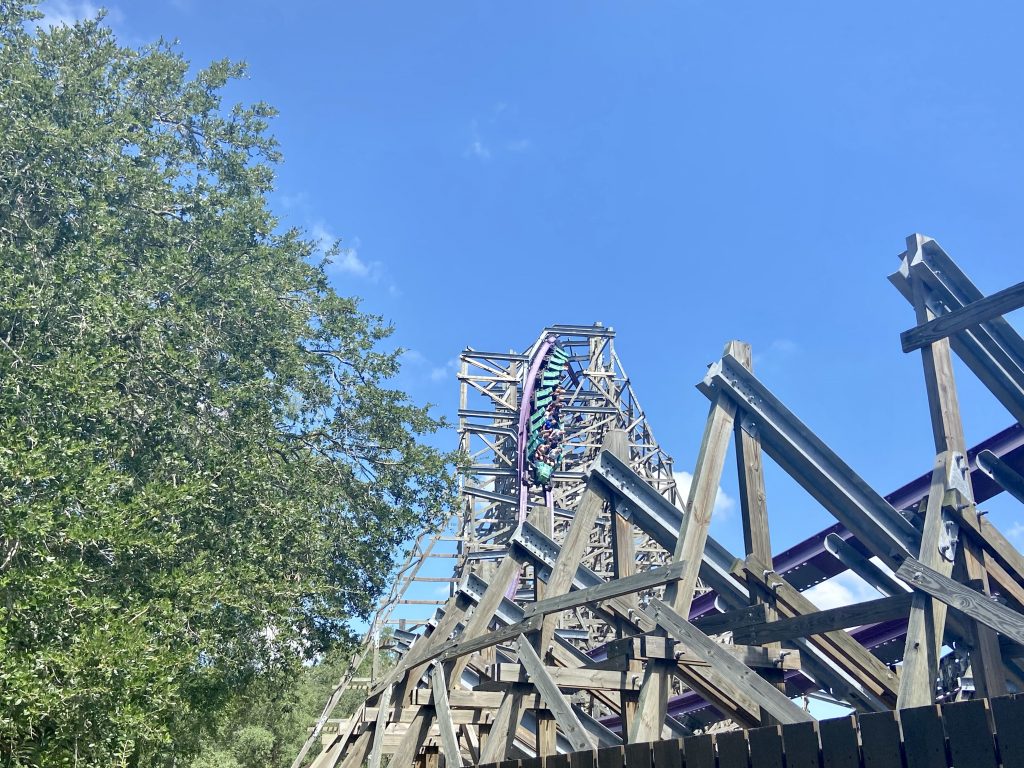 The key enhancements are that you hit it at much greater speed, being in the middle of the coaster layout, and your direction changes going into the drop, adding even greater intensity. 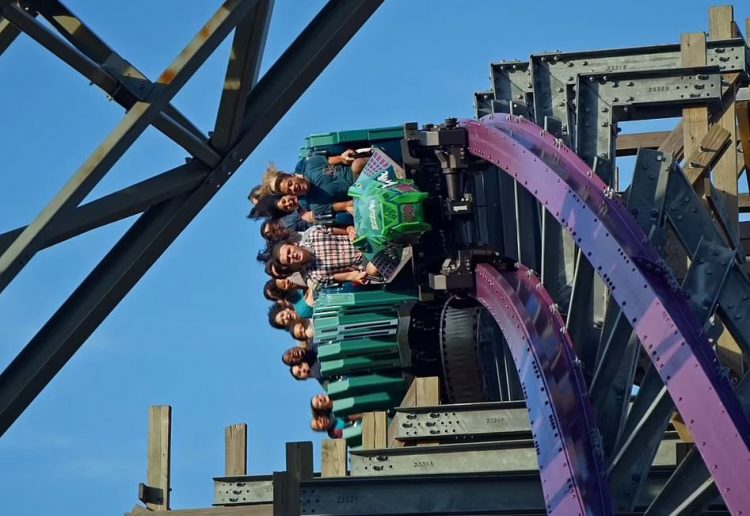 My favorite element, however, is the sustained wave turn over the ride’s station. This is not the first “Twist n’ Shout” turn on a RMC, but it seems to last just a few seconds longer, suspending you sideways before a snappy dive under the ride’s lift hill.

I can’t find fault in a single part of Iron Gwazi’s 4,075-foot layout. The airtime never seems to let up, it mixes up familiar with new and surprising variations, and it’s all done on a glass smooth track.

Practical and operational missteps are the only negative things I can say about Iron Gwazi.

I’m far from the first reviewer to note that the ride has low capacity and slow operations. Just look at some of the statistics recorded during its first weeks in operation:

Dispatches @ 8:30 on Iron Gwazi. Capacity better, ops hustling 👏
Remember it takes 49 seconds just for a train to park in the station, that’s the amount of time that VelociCoaster dispatches in.
RMC needs a multi-move system where 2 trains can occupy the station at the same time pic.twitter.com/mQNP0ifXW3

While hopefully operations continue to improve to the extent possible— maybe pushing the capacity into the range of at least 700 or 800 riders per hour — slow dispatches were still occurring in my July 2022 visit, nearly four months after the ride debuted. 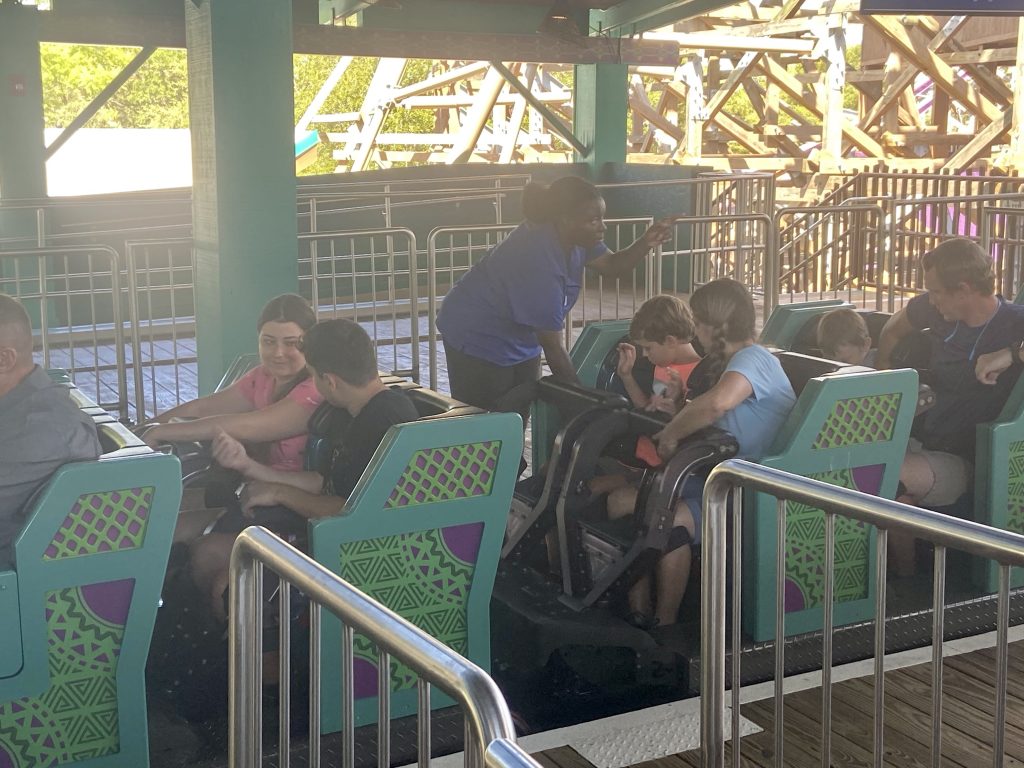 Increased capacity and efficiency should be a priority for Busch Gardens Tampa Bay, given that it’s a year-round park. Your local Six Flags may get away with suboptimal operations when all you have are seasonal hires, but Busch needs to be better, especially for a coaster expected to be its headliner for years to come.

Coaster enthusiasts do seem to love mulling over their rankings. For the horde of coaster YouTubers and bloggers, there was one burning question about Iron Gwazi: Will it be better than Steel Vengeance, the Cedar Point RMC behemoth that is so often proclaimed to be the best coaster in the world?

My answer is no and that’s mostly because of length. Steel Vengeance has nearly 1,700 more feet of track without, in my opinion, losing any quality, even if some of its elements are repeated in a way Iron Gwazi doesn’t. More airtime is better, in my book. Iron Gwazi does have the advantage of being smoother (my 2022 rides on Steel Vengeance had me uncomfortably hitting the restraints on its last airtime hills), but that may not last long. 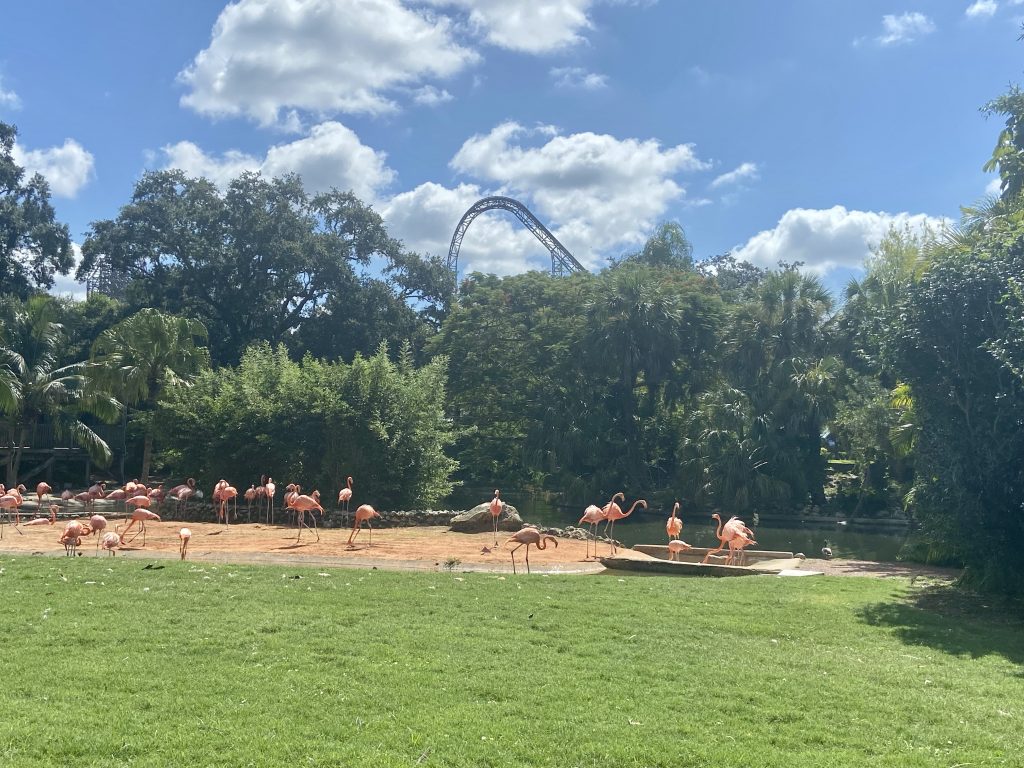 Obviously, that would mean Iron Gwazi is not my personal No.1 coaster. But neither is Steel Vengeance. At the time of this writing, Jurassic World VelociCoaster at Universal’s Islands of Adventure tops my list for combining sheer intensity with a beautiful environment to enhance its thrill, but Iron Gwazi is most definitely No. 2 in Florida.

Putting its multiple delays aside, Iron Gwazi is a triumph for Busch Gardens Tampa Bay, erasing any doubt about its position as the top park for coaster enthusiasts in Florida’s crowded theme park market. 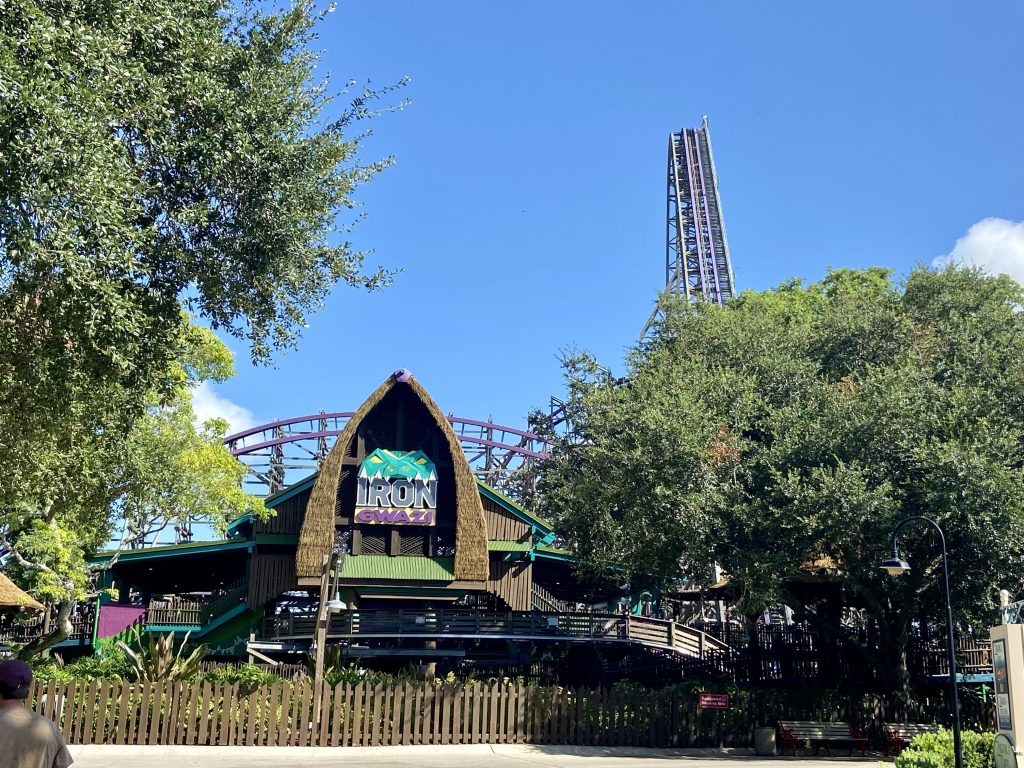 Its relentless pacing, variety of elements and overall layout make it unquestionably one of the best roller coasters in the U.S. The fact that it’s even in the conversation for best overall coaster — after years of Steel Vengeance’s No.1 ranking being practically an article of faith for coaster enthusiasts — is a victory for RMC and Busch Gardens Tampa Bay.

For the less-coaster-obsessed theme park fan, Iron Gwazi is absolutely worth the drive from Disney World or Universal Orlando to experience. Expand your horizons and see what all the hype is about.

DISCLOSURE: This review is based on my own opinion and perspective. I paid for my own park ticket. Busch Gardens Tampa Bay gave me no special access to ride Iron Gwazi.