Have you ever wandered through Orlando International Airport late at night, already exhausted, and just wished you could straight to bed instead of waiting to get to your Disney or Universal hotel?

Well I have. In 2021, I checked one very minor item off my Orlando bucket list: staying at the Hyatt Regency located inside the Orlando International Airport (aka MCO, for those of us who know our nation’s airport codes). 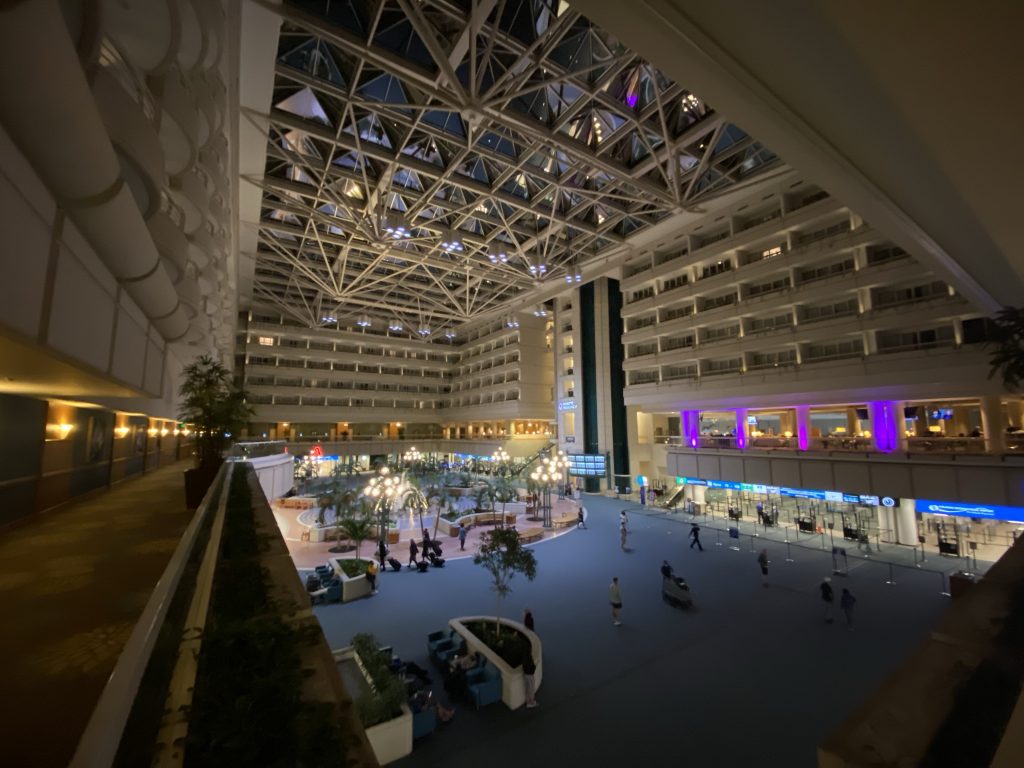 Despite being removed from the major theme parks, there are good reasons for Disney and Universal visitors to stay here — if only for a night.

My stay at the Hyatt Regency inside MCO came in May 2021, costing me only $121 per night through a Hotwire Hot Rate deal.

Like other Orlando hotels, prices here can vary a lot, but being the only hotel inside the airport makes it easy to snag a Hotwire deal where you’re technically not supposed to know which hotel you’re booking. Just look for the four-star hotel whose location is listed as “with 0.25 miles of search” when you search for hotels closest to Orlando International Airport.

Getting to the guest rooms at the Hyatt Regency is easy. Go up the escalators in the center of the MCO terminal — to either side of the large departure screens  — and you’ll find the front desk. I managed to be inside my room a little more than 15 minutes after stepping off the plane. 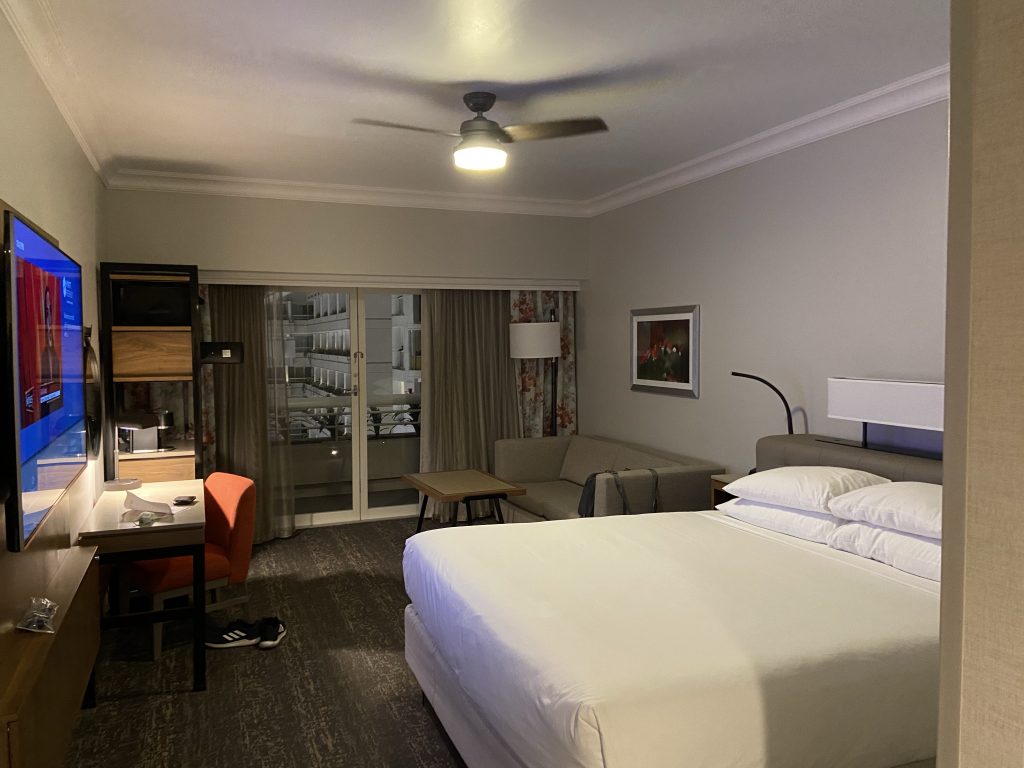 The room itself has been clearly (and comfortably) updated with everything you’d expect from a Hyatt-level hotel — and some you may not, like an in-room Chromecast. You can check out my video room tour and short review here:

Correction from the above video: I was way off in guessing that the locked balconies were due to post-Sept. 11 security concerns. Balcony access has been restricted since a TSA worker committed suicide by jumping from a balcony in February 2019, an incident which caused a panic at the security checkpoints and hours of delays.

The biggest surprise of my stay was eating at McCoy’s Bar & Grill, the main restaurant on the hotel’s lobby level. 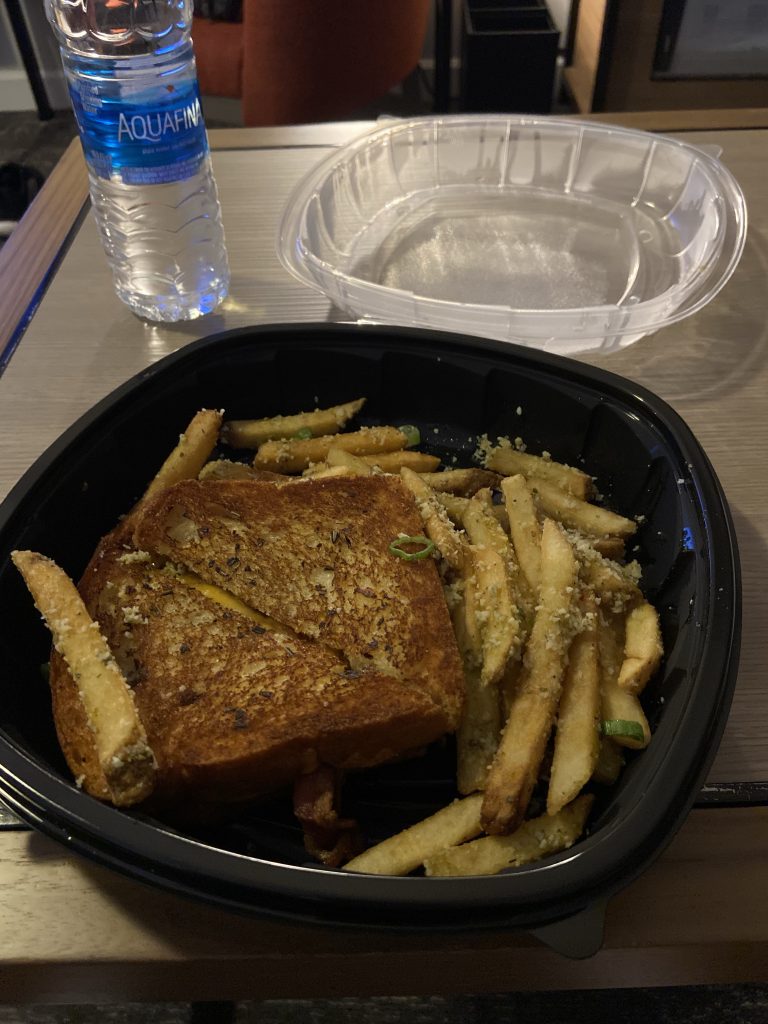 I ordered the bacon and apple butter grilled cheese sandwich, a mix of swiss and cheddar cheeses on thick cut brioche bread with the extra kick of apple and rosemary garlic butters. I’m not an adventurous eater in the slightest, but this savory-and-sweet mix was perfection, as were parmesan-seasoned fries. It was so good that I’ve been meaning to sneak back up to McCoy’s before one of my departing MCO flights.

Another restaurant, Hemisphere, is located on the ninth floor, but was not open during my 2021 visit.

One Hyatt perk is the shopping and dining already provided inside the airport. I’ve always found it strange that MCO places a large food court and quality shopping — including the Disney, Universal, SeaWorld and NASA stores — before the security checkpoint, but this allows Hyatt guests to take advantage if they’re looking for a quicker, cheaper bite than McCoy’s or want some last-minute theme park souvenirs. 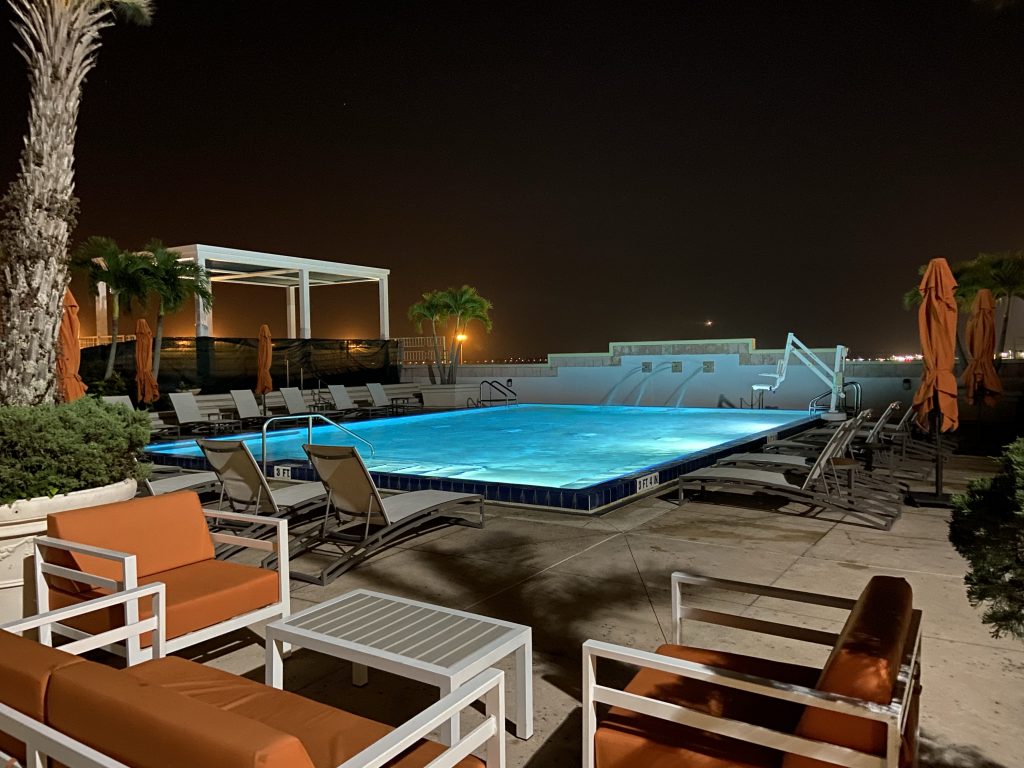 The pool at the Hyatt Regency inside MCO (Theme Park Tribune)

There is a pool area, and while it’s serviceable, it can’t compare to the pools offered at Disney, Universal, or larger off-site resorts. Unless you’re really in the mood for a swim during your stay, it’s not worth your time.

When it makes sense for theme park visitors to stay here

It’s clear this hotel can appeal to anyone traveling in or out of Orlando International Airport. But this is Theme Park Tribune after all, so does the Hyatt at MCO make sense for anyone on a theme park vacation?

I say yes — in certain circumstances. I was flying in on a Friday night, around 10 p.m., after a full work week. Staying at the Hyatt may have saved me another hour of picking up a rental car, driving to my Disney World hotel and checking in when I was already weary. Instead, I got a good meal and went straight to bed. 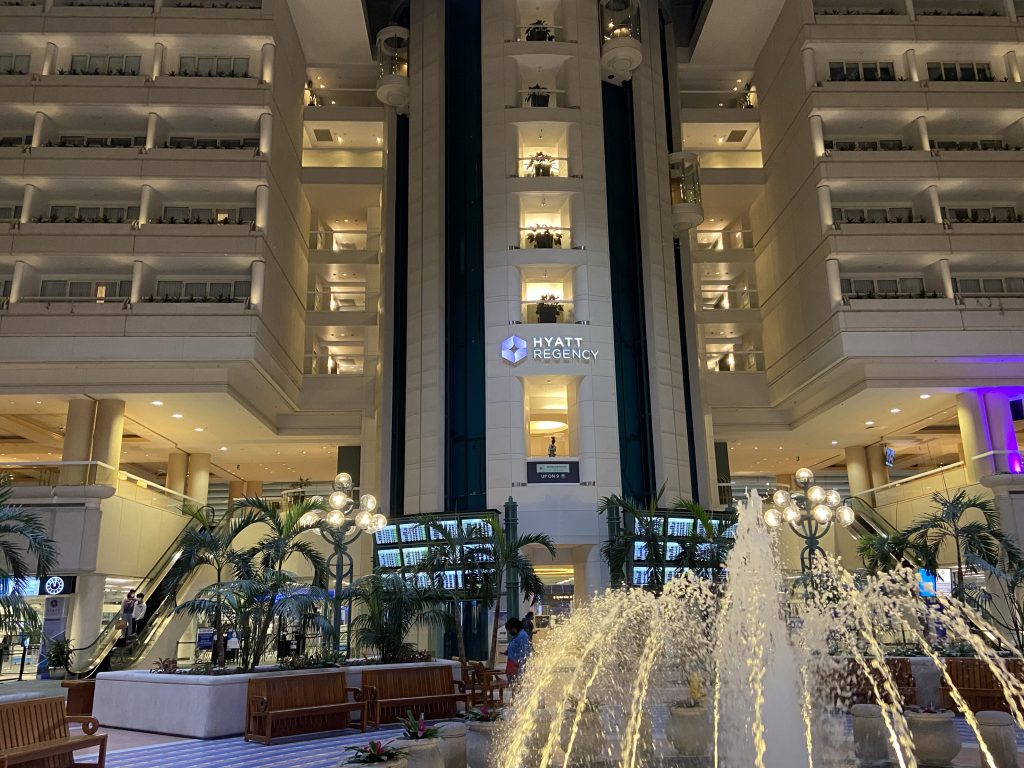 Now of course that just delayed the rental car pickup and drive to Disney for the morning, but by then I was well-rested, rather than dragging myself through extra tasks when I just wanted to get to sleep. It served a practical purpose.

Departing travelers may find a similar reason to stay here. If I was leaving on one of the earlier flights from MCO, say sometime before 9 a.m., I would certainly consider staying here to allow for some extra rest. In both scenarios, you could potentially save some money on a rental car, too by shaving some time off our reservation. After all, you won’t need that rental car when you’re staying in the airport. 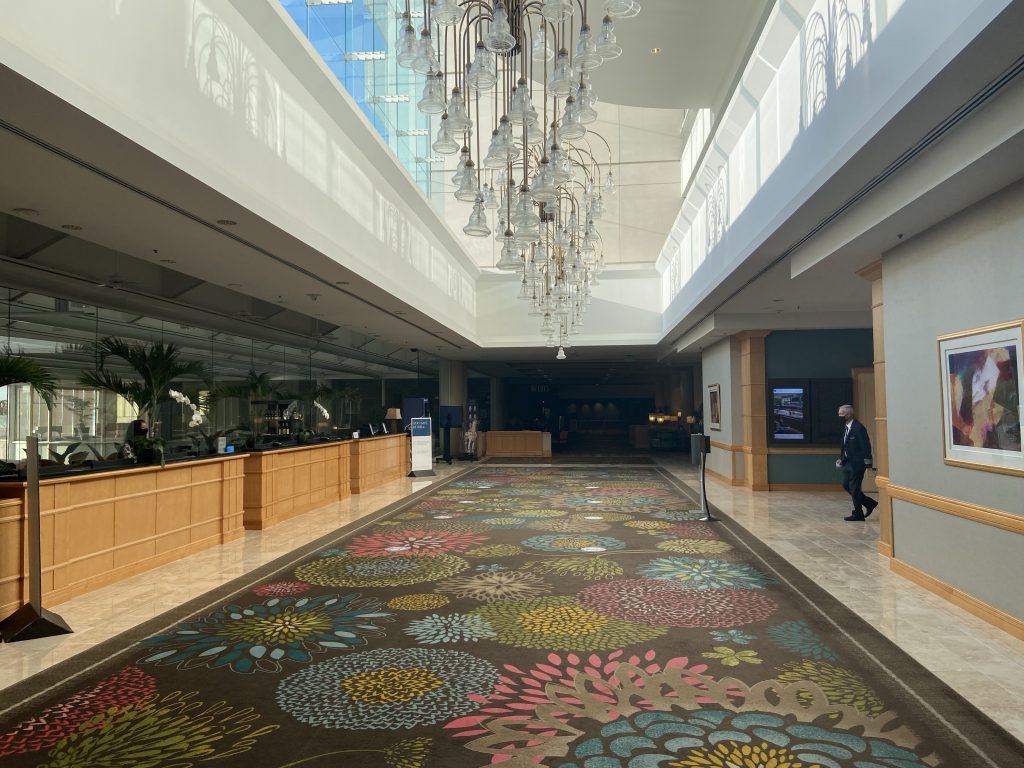 However, using the Hyatt at MCO as your main hotel during your Orlando stay would be ridiculous thanks to its distance from all the major attractions.

At best, you’re about 30 minutes away from Disney World’s Magic Kingdom, 20 minutes from Universal Orlando, and 15 minutes from SeaWorld Orlando. There’s no good reason to shuttle back and forth from the airport for your entire trip when there are so many hotel options closer to the places where you’ll spend the majority of your trip.

If a comfortable, recently updated Orlando hotel with surprisingly good food was located closer to the heart of the area’s theme parks at this same price point, I’d probably stay here more often. Alas, the location of the Hyatt Regency Orlando International Airport limits its usefulness for theme park visitors to one-night stays for those flying in late or departing early from MCO.