I couldn’t help but set my expectations high when staying in a 117-year-old hotel, but Hotel Breakers at Cedar Point did not live up to what I envisioned.

First opened in 1905, this 669-room Lake Erie resort once played host to six U.S. presidents and the likes of Annie Oakley and John D. Rockefeller. In the modern era, it’s more of a family resort designed to entertain guests drawn in by Cedar Point’s roller coaster collection. 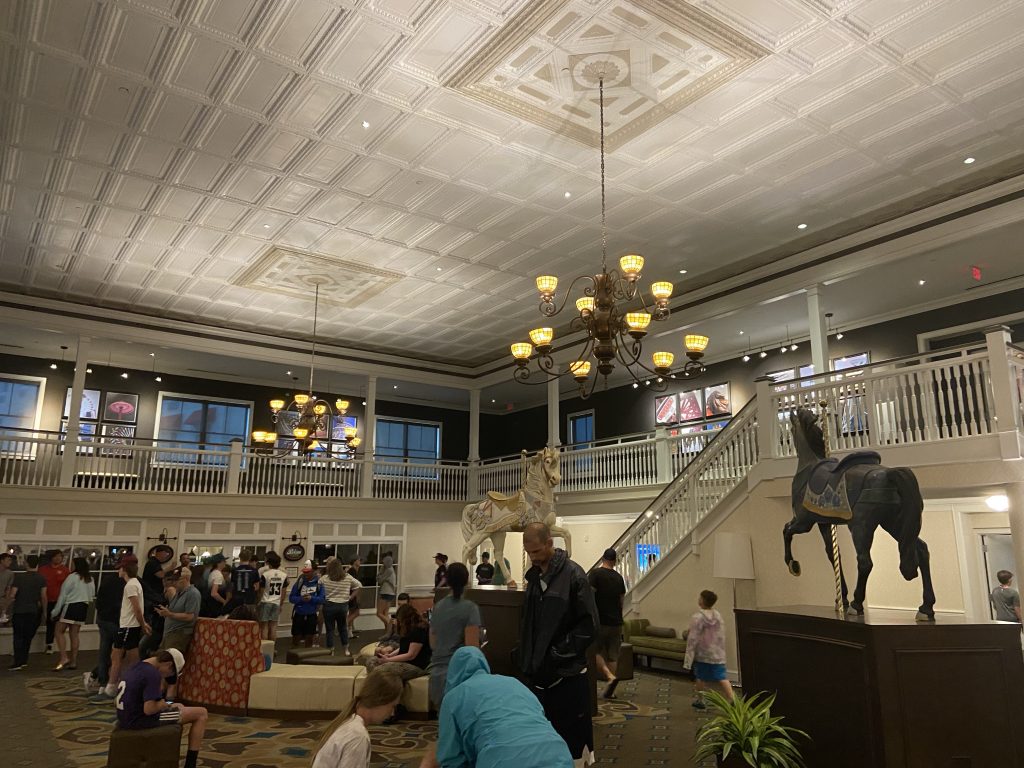 Given the history of Hotel Breakers and its proximity to the park, it was my first choice for an overnight stay at Cedar Point. Perhaps it was a victim of its own hype. What I found wasn’t a historic deluxe resort, but something more like a three-star hotel masquerading as something more luxurious.

Being a solo traveler on this trip, I opted for a king bed room, which was the cheapest option for my May 2022 visit. I paid $244 for my one-night stay, which includes tax and my discount as a Cedar Fair platinum passholder.

Check out my video room tour for more thoughts on the room itself and the hotel in general:

There is no shortage of amenities at Hotel Breakers, but they’re more about quantity than quality. So let’s start with the features outside my room that I enjoyed. 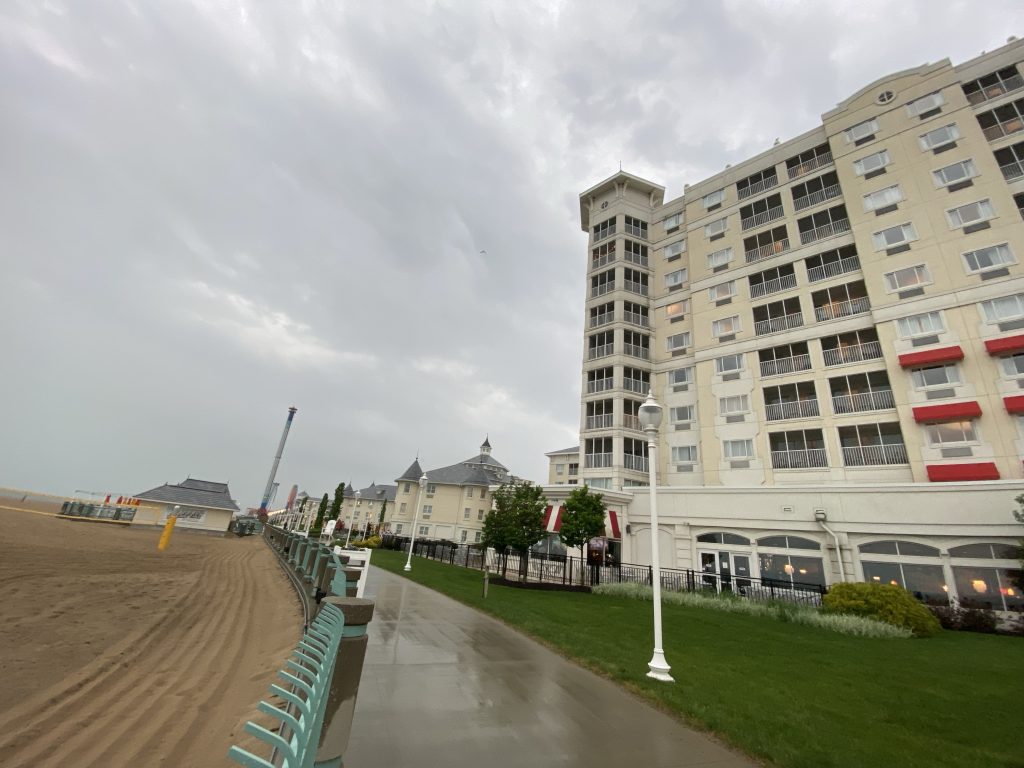 The beach is the most obvious thing to like here. The long waterfront not only offers ample space for soaking in the sun or playing volleyball, just walking along the boardwalk provides an idyllic setting for a sunset or sunrise stroll. 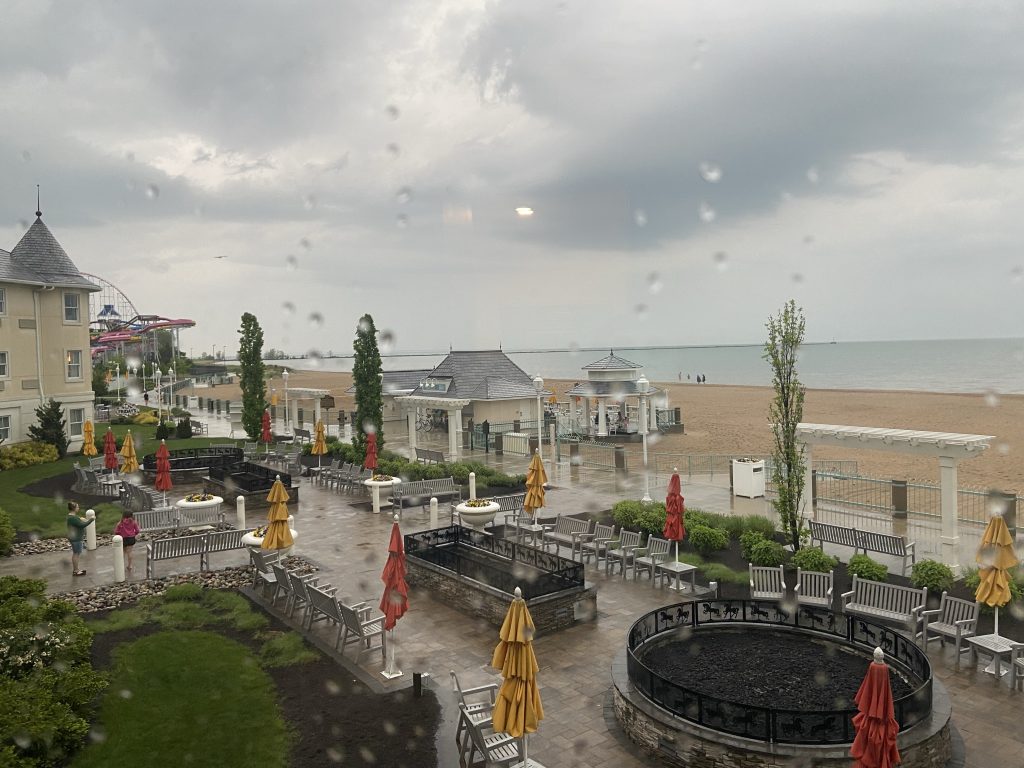 I certainly didn’t mind waking up to Lake Erie being right outside my window. 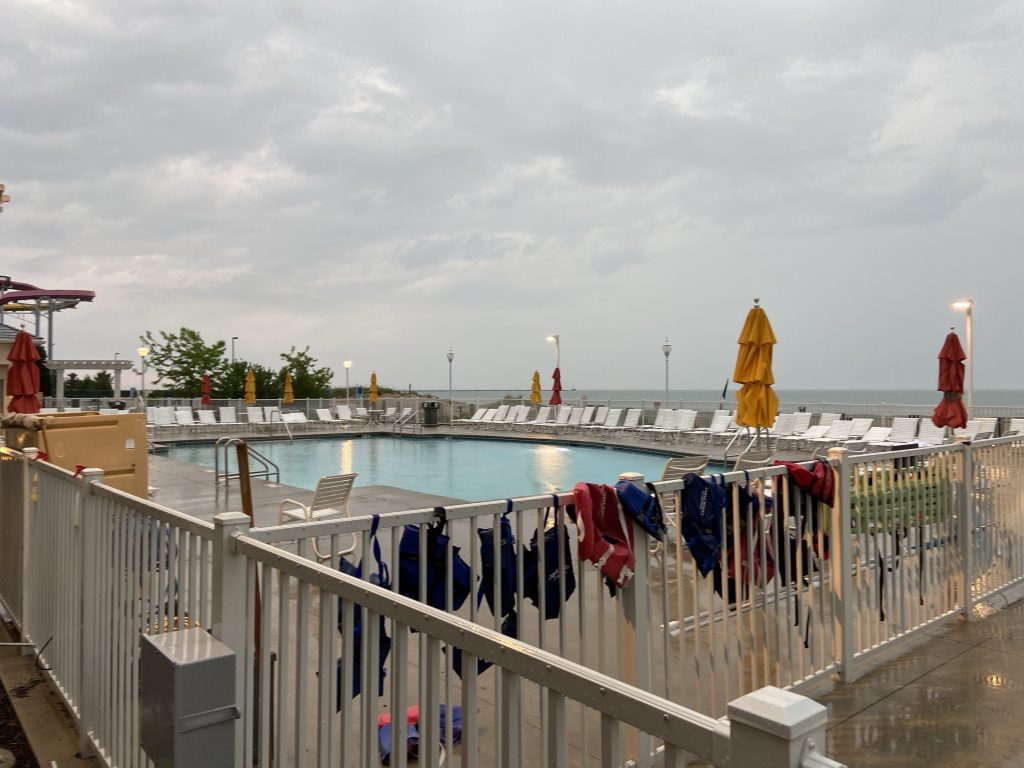 One of the outdoor pools (Theme Park Tribune)

The hotel features a total of four pool areas: two full outdoor pools, a children’s pool with small slides and a splash pad, plus a smaller indoor pool. While these aren’t the nicest pools I’ve seen at a theme park hotel, it’s still impressive to see that much pool capacity when the hotel could justify having fewer because of the nearby beach and Cedar Point Shores water park. 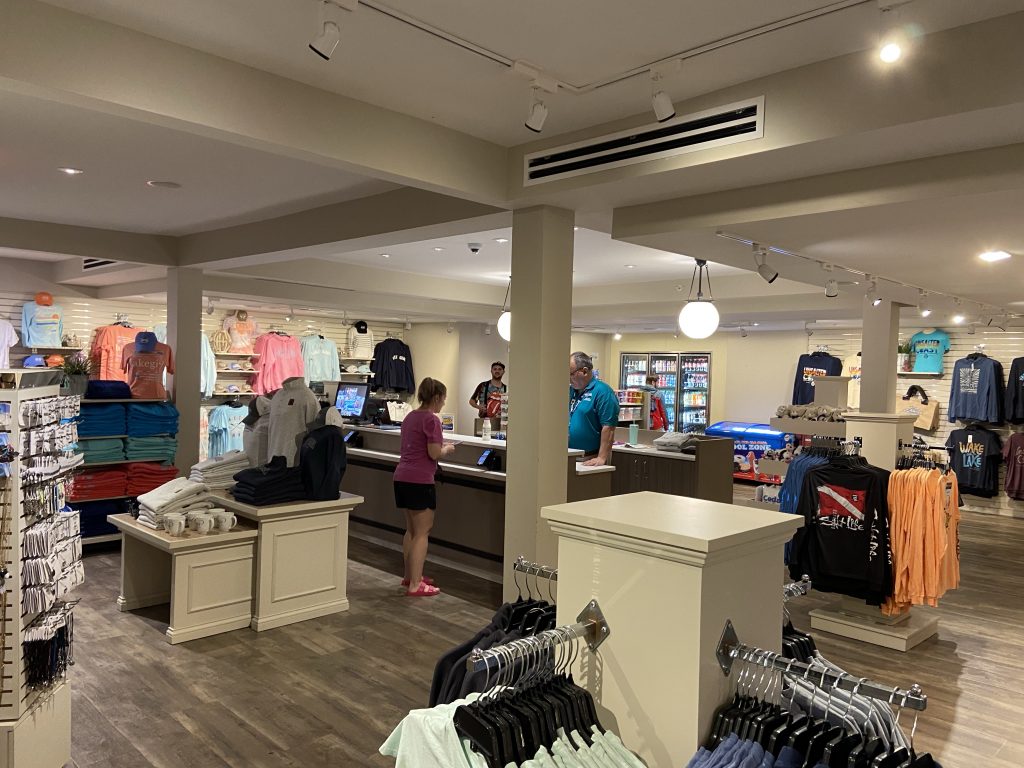 Breakers Boutique is the hotel’s gift shop just off the front entrance. While you won’t find much in-park merch, there are plenty of Hotel Breakers-branded items and you can even pick up your Fast Lane wristbands and park tickets here, saving you from longer lines at stores inside the parks.

I wasn’t uniformly positive about the resort’s eight dining and drinking locations, but several of the smaller options are worth a visit. There’s a Starbucks just off the lobby — I’d recommend getting there before 8 a.m. to beat the morning rush — next to the Surf Lounge, a full-service bar with a small food menu that includes the typical burger and fried food options. The Sand Bar along the waterfront provides the best view of the beach without having to venture into the sand. 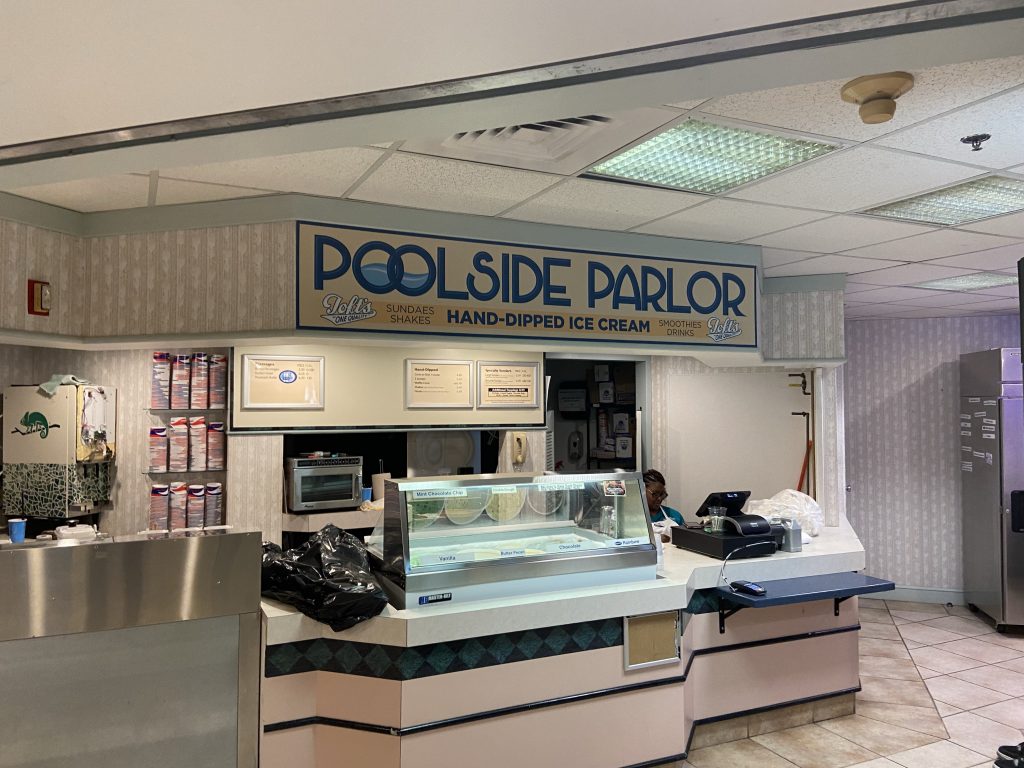 If you have something sweeter in mind, head to Poolside Parlor, which serves up Toft’s ice cream, an Ohio brand that’s been around since 1900.

The three full-service restaurants at Hotel Breakers are all chains that can easily found outside the resort: TGI Fridays, Perkins and Tomo, a Japanese hibachi restaurant. To me, having chains inside a hotel at this price point is lazy and not at all a selling point. 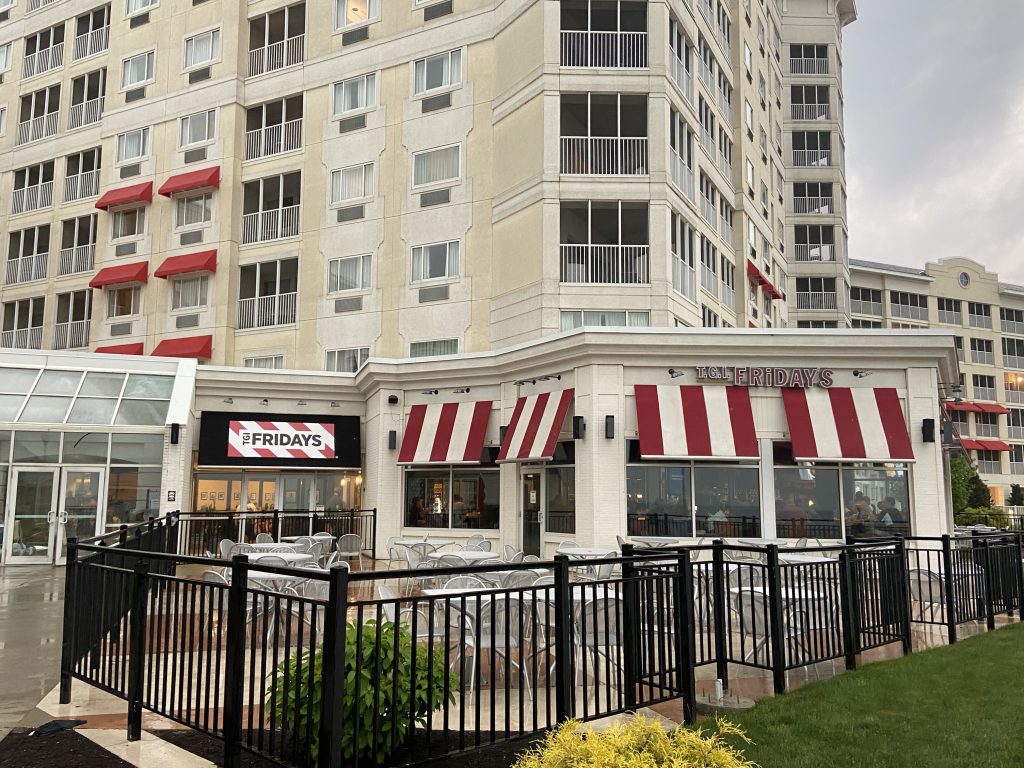 What makes it worse is how easily overwhelmed these locations can become. When I arrived for my stay, thunderstorms had closed almost all of Cedar Point rides and driven Hotel Breakers  guests back to the resort. Perkins closed after 4 p.m. and the other two restaurants could not handle the demand, resulting in waits of 90 minutes or more — for generic chain restaurants that you can find anywhere. 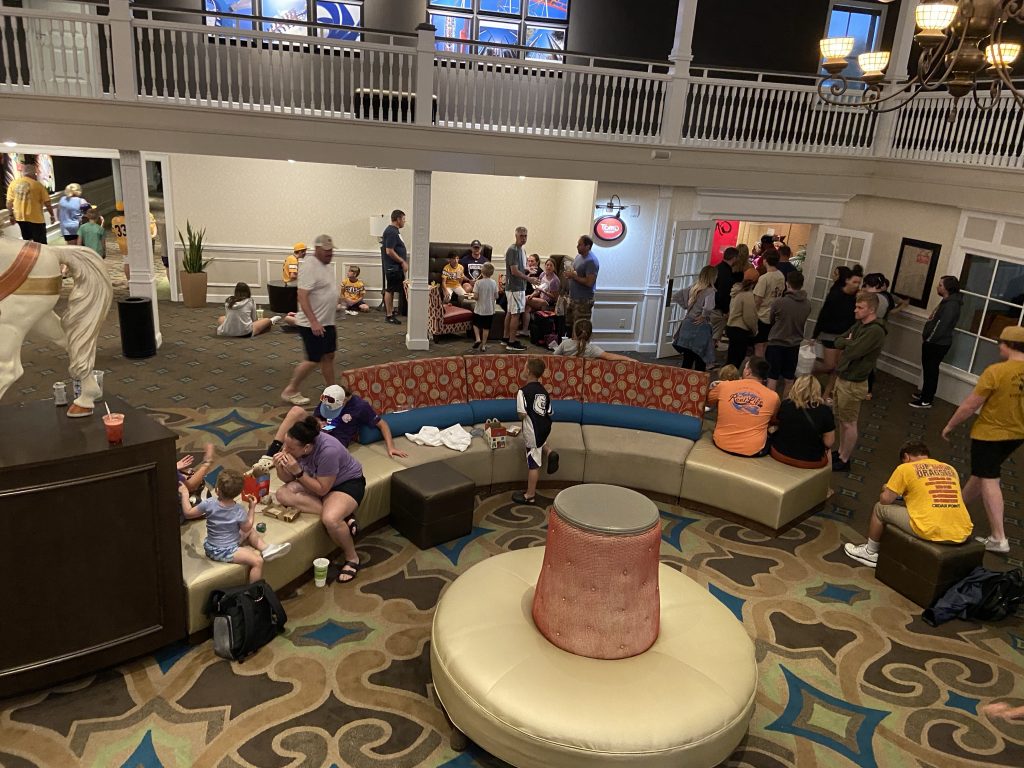 With no quick service option to satisfy hungry guests, and a 15-minute drive off the peninsula to find other options, it’s no wonder Domino’s was doing brisk business. The ubiquitous pizza chain has a location near the hotel with delivery straight to your room, but again, you can get Domino’s anytime. I wanted something more and I think some sort of quick service food court would solve these issues.

Storms also caused the indoor pool area and the small arcade (largely made up of ticket redemption games) to become overcrowded. Obviously, the hotel doesn’t control the weather, but given how the unpredictability of Lake Erie storms, I think the resort would be better designed to entertain guests when they’re driven inside. 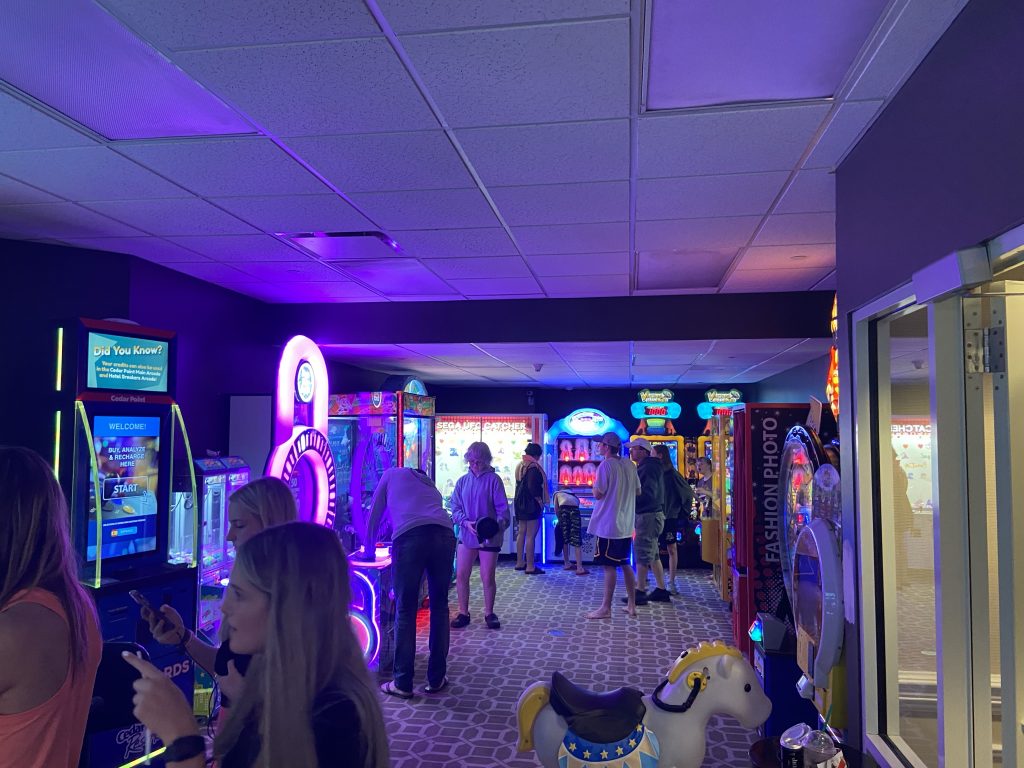 I did grab a meal at Perkins before heading into the park the following morning. The service was good, but the food was lackluster, with the pancakes coming out rubbery and unsatisfying. 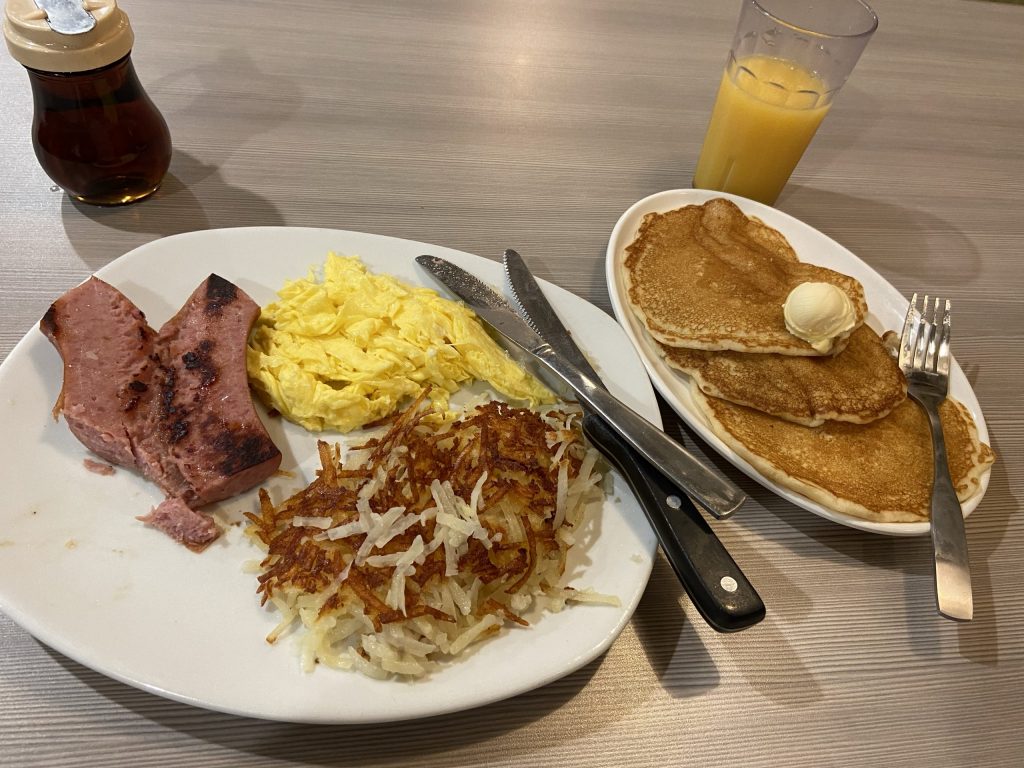 So the food in general was a big miss. As long as the weather holds up, I’d recommend you just eat inside the park. You’ll find more imaginative menus there anyway, unless you really consider TGI Friday’s a go-to destination on your vacation.

Proximity is a major perk — but is that really enough?

My May 2022 stay at Hotel Breakers was the second time I’ve stayed at a Cedar Fair-owned hotel. The first was the Knott’s Berry Farm Hotel which I gave a D- grade (check out the full review here). While Hotel Breakers is better, the two properties have the same major perk: proximity to their respective parks.

This is more valuable at Hotel Breakers, as Cedar Point spans roughly six times the acreage as Knott’s. You can take advantage of separate entrances, the Magnum XL-200 Gate and the WindSeeker Gate, with the former coming in especially handy by placing you much closer to Steel Vengeance and Maverick, both located in the back of the park. If you make either ride your first stop of the morning, you will comfortably beat guests coming in from the front entrance. 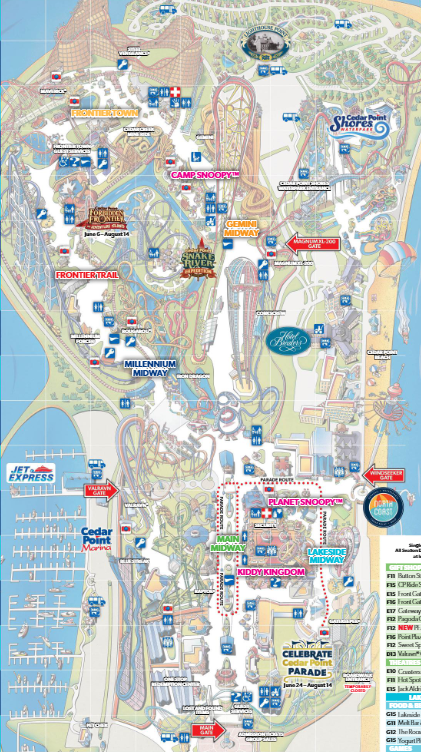 The Magnum and WindSeeker gates are exclusive to hotel guests from 9 to 10 a.m., giving them a big head start on getting to the back of the park (Cedar Point)

Should you want to take a break in the middle of the day, you’ll have an easy walk back to your hotel room. In fact, I’d guess that in most cases, it would take a Hotel Breakers guest less time to get back to their room than it would a regular guest to return to their parking spot, much less drive back to their own hotels.

So the location here is certainly a valuable perk, but bothers me that it’s the biggest perk. Theme park fans are no strangers to paying more for proximity — I’m looking at you, Disney — but at this price, I still expect a better experience based on what the hotel itself offers, not just the fact that it’s close to something.

The final verdict: When you should (and shouldn’t) stay at Hotel Breakers

Hotel Breakers is a very mixed bag. Nice rooms, but overpriced. Lots of amenities, but few of them are worthwhile. A convenient entrance into the park is nice, but bad weather can essentially shut Cedar Point down and leave you feeling sort of stranded with few quality dining options. 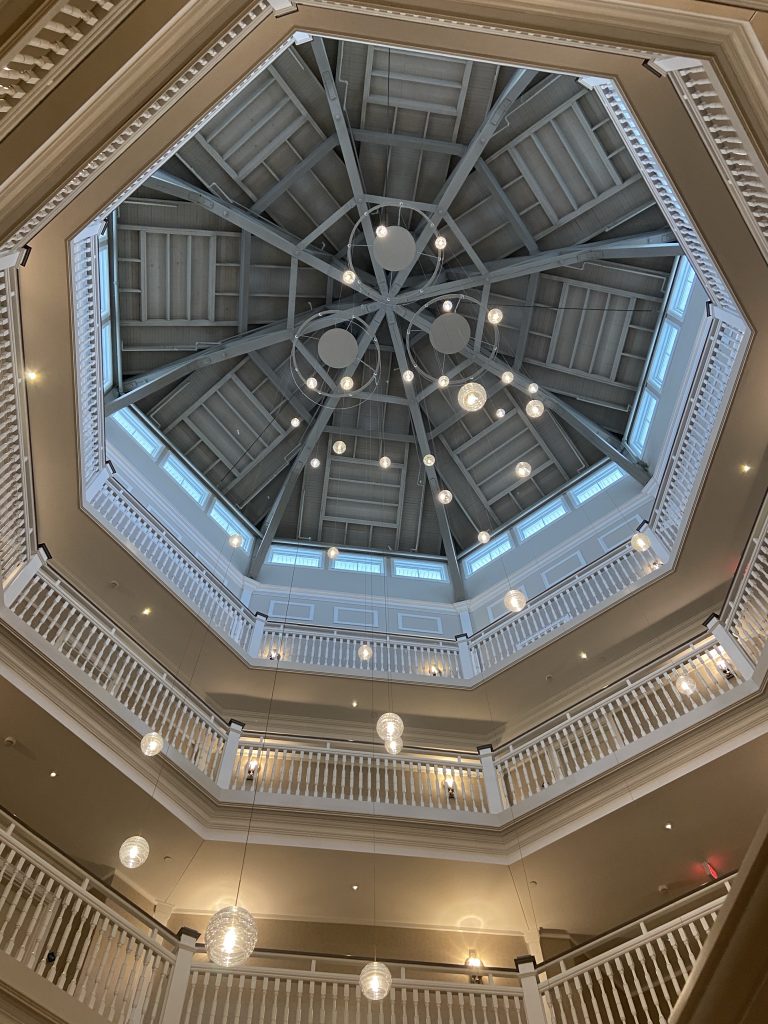 A view of the hotel’s historic rotunda (Theme Park Tribune)

This led me to the conclusion that Hotel Breakers deserves a recommendation only in certain situations. If you’re coming with a larger group with different levels of theme park endurance, where some may need a midday break, the proximity is worth the price. If it’s one of your first visits to Cedar Point, those entrances will make it easier to ride the park’s entire coaster lineup in a single day.

However, if you’ve been to Cedar Point before, if dining options are important to you or if you’re really looking for the best value for your hotel stay, I can’t recommend Hotel Breakers. At $244 per night, I think customers deserve more than a nice Lake Erie view, proximity to the park and overcrowded chain restaurants.