After 40 years, Epcot finally has a roller coaster — and it’s the best one that Disney has ever built.

Guardians of the Galaxy: Cosmic Rewind is Disney World’s big 2022 addition. Being the first Disney-built Marvel attraction in Orlando and costing a reported $500 million, expectations were understandably high.

This couldn’t just be a 2022 version of Universal’s Harry Potter and the Escape from Gringotts, with some roller coaster moments mixed in while moving from screen to screen. It had to be bigger, better and buzzworthy to draw people back to Epcot after years of heavy construction. 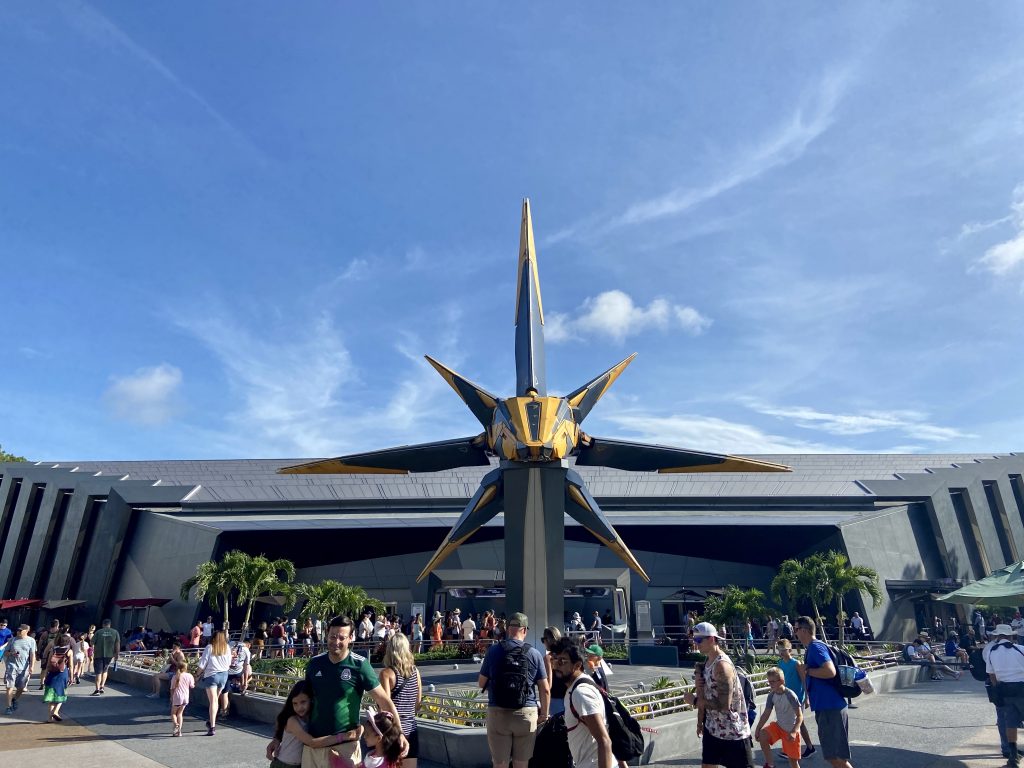 Mission accomplished, and then some.

While rigid Epcot purists will grasp for petty reasons to hate this ride, they’re missing out on a triumphant success of Disney Imagineering that brings some much-needed fun to Disney World’s second theme park.

The queue and preshows

To make the attraction better fit into Epcot, its backstory places it as the first Epcot pavilion representing another planet: the Wonders of Xandar, home world of Nova Corps as seen in the first “Guardians” film. So it’s repeating a theme of cultural exchange that has been consistent through Epcot’s first 40 years. 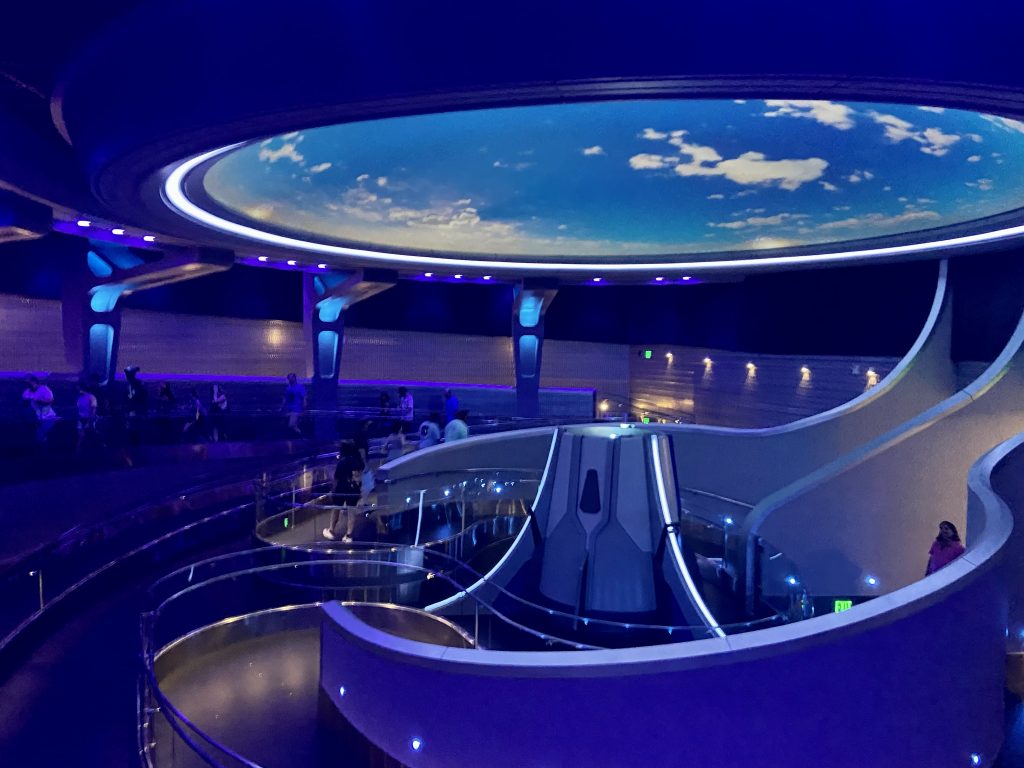 The first room of the queue is called the “Galaxarium,” where an Xandarian super computer called World Mind spouts off a mix of real space facts, made-up Xandar trivia, and some corny jokes about Earth and the Guardians. You’ll then wind upstairs into an area with displays of Xandarian technology and screens playing interviews with the Guardians, including one where Star-Lord (theme park attraction veteran Chris Pratt) references defunct Epcot favorites like Horizons. This bit of fan service seemed a bit off the mark to me. Newer fans won’t get the reference and it just throws salt in the wound of old Epcot’s diehards. 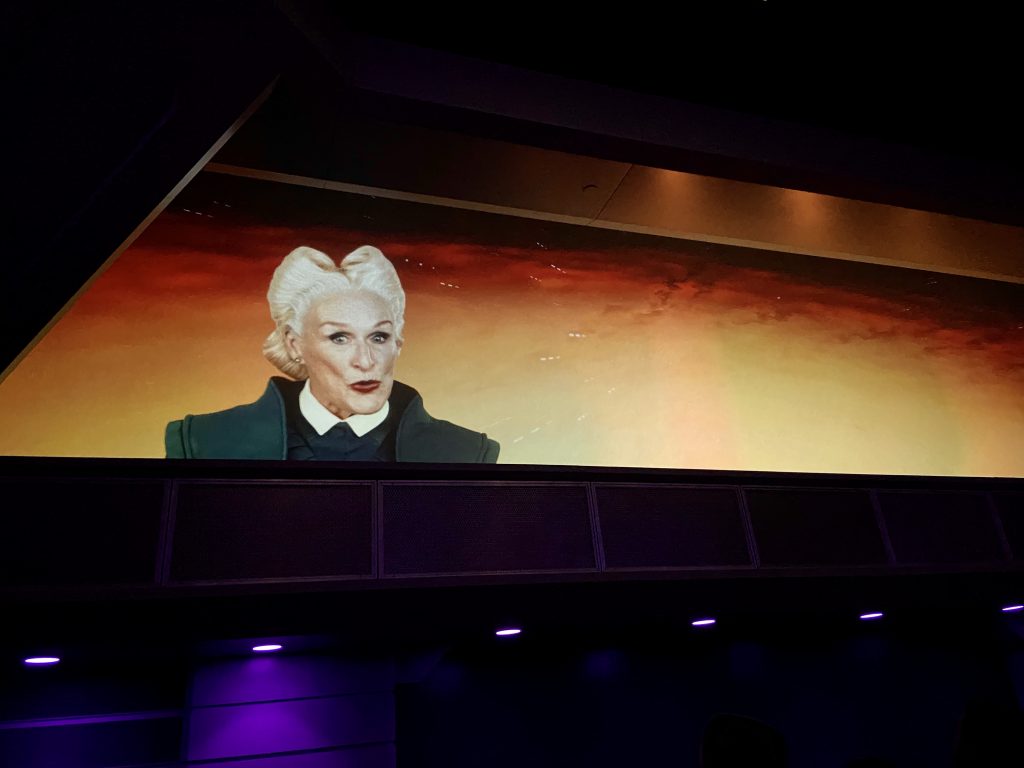 The first true preshow takes place in a rather nondescript room with a video from Nova Prime (played by Glenn Close). She explains that a device called a Cosmic Generator is used by Xandarians to create “jump points” as shortcuts through vast distances of space, and we lucky Terrans from Epcot are going to be teleported into a Nova ship to see the device in action. That cuts to a new character, Tal Marik (played by Terry Crews, much to the delight of other guests on my rides), telling us to put away our phones and ushering us into the next room. 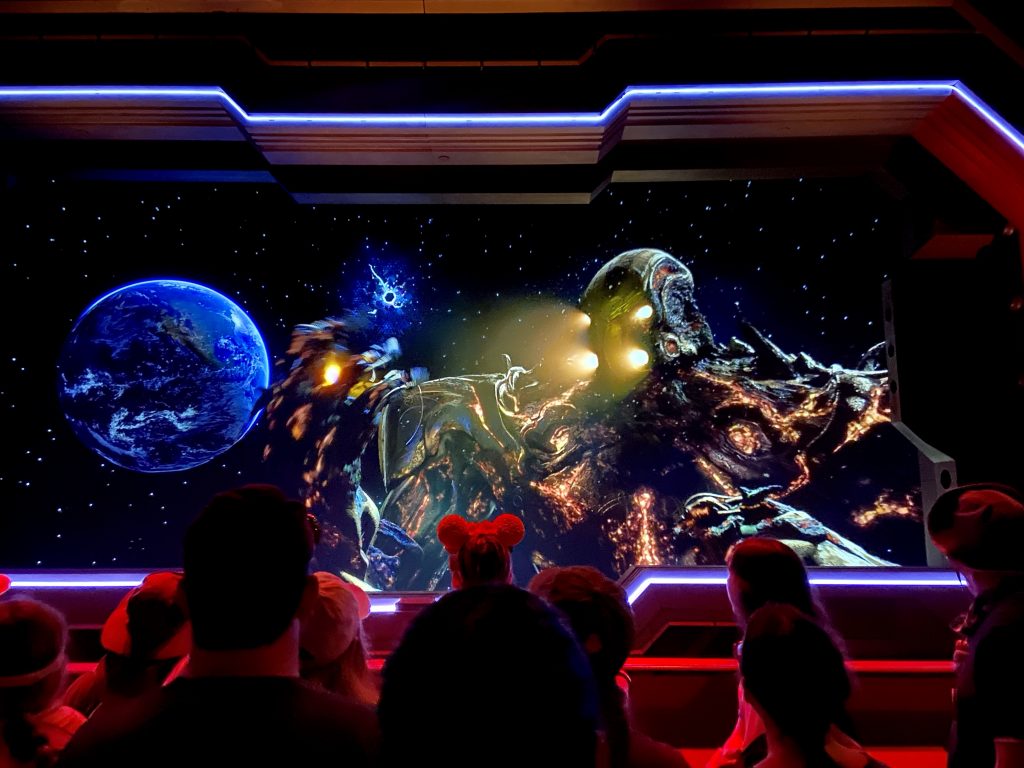 Here’s the part where something goes wrong (Theme Park Tribune)

This second preshow “teleports” you to the ship, via the tried-and-true disappearing-wall-when-the-lights-go-out trick (think of the final scene in Poseidon’s Fury at Universal Orlando). But this being a theme park ride, something has to go wrong. The Cosmic Generator is stolen (via a Peppers Ghost effect) by an enormous being called Eson, a Celestial who was briefly shown in the first “Guardians” film. With the Guardians looking on, Eson creates a massive “jump point” to erase Earth from existence, and Rocket Raccoon suggests sending you — meaning the Terrans — in order to track Eson before the jump point closes.

The second preshow exposes the ride’s biggest flaw: not having Bradley Cooper voice Rocket. I’m not privy to the reasons why, but replacing Cooper’s voice with just an average imitation is noticeable enough to detract from the experience, at least for a few seconds — especially since the character had multiple lines in the preshow and the ride itself. (The absence of Vin Diesel as Groot, on the other hand, barely registers.)

It’s especially puzzling considering Cooper participated in the Guardians’ other attraction, Mission Breakout at Disney California Adventure. Delays certainly condensed production time for the ride’s film and voiceover work, and may have created insurmountable scheduling problems for Cooper, but if this was purely done in the name of budget cuts, then shame on Disney. I have a hard time believing it wasn’t deliberate, however, since Disney managed to get an eight-time Oscar nominee in Close to appear.

Cosmic Rewind is like a next-generation version of Space Mountain, taking full advantage of its indoor setting to go well beyond the typical coaster thrills. It’s the kind of highly-advanced, jaw-dropping ride experience you expect when Disney builds a true thrill ride — all injected with a pleasant dose of “Guardians” style. 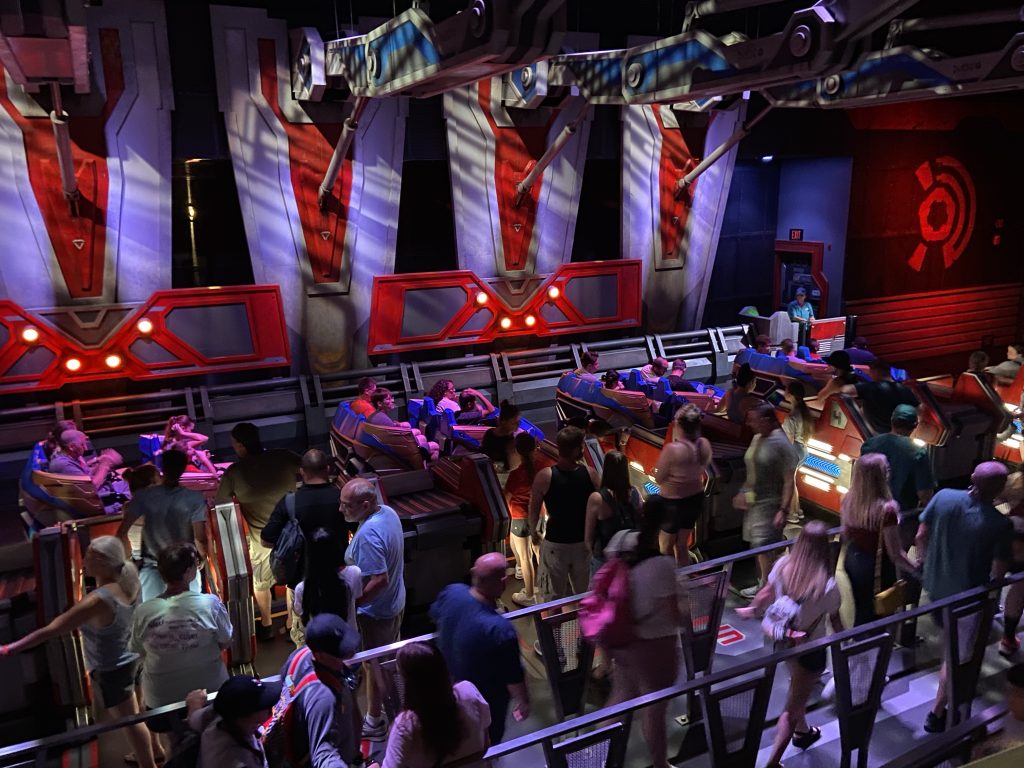 It all starts with you and the Guardians catching up to Eson, blowing the Cosmic Generator out of his hands, prompting an explosion that sends you launching backwards. From here on out, the story is pretty confined to banter and video screens. That’s not a knock on the ride, as this isn’t meant to weave in a progressive storyline like Hagrid’s Magical Creatures Motorbike Adventure. The story is secondary to the ride sensation, as your vehicles spin while dipping and diving through jump points and some stunning set pieces, and without the jerky stops and starts like Gringotts.

There are no inversions along the 5,577 feet of track, but don’t mistake that fact for a lack of intensity. I felt genuine airtime on several drops, all mixed in with the strange-but-delightful sensation of the Omincoaster ride vehicles. 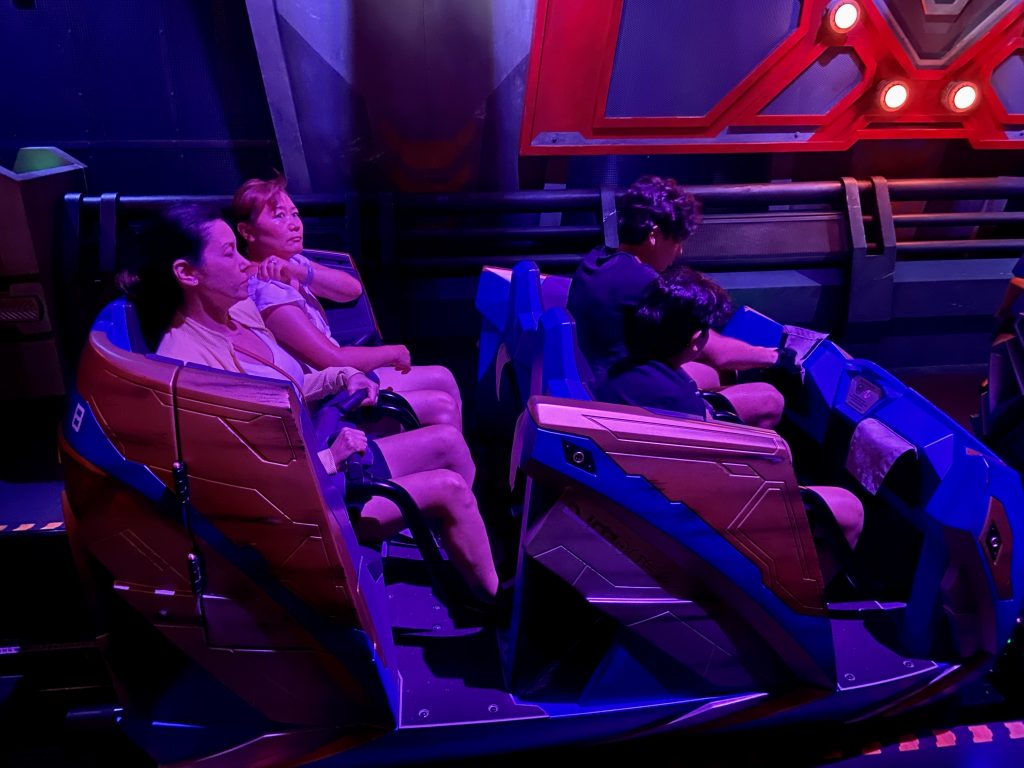 These beauties have a controlled 360-degree spin, meaning they’re specifically tilted towards certain screens and effects, rather than just going with the natural rotation. Yet it all feels extremely smooth, almost graceful, without losing a hint of thrill.

Now if you’re a Disney World veteran worried about it being too thrilling, use Expedition Everest at Disney’s Animal Kingdom as a measuring stick. If you can handle that ride, you should be fine on Cosmic Rewind.

This being the Guardians of the Galaxy, the soundtrack is very important, with each ride being randomized to one of six songs:

Of the three I experienced, I think Flock of Seagulls worked the best. Something about that delay effect on the guitar works so well when you’re supposed to be racing through space.

A point-of-view video won’t do this justice, but here’s one anyway:

There are no animatronics on the ride. While I can’t say having one at the beginning or end wouldn’t have been a nice addition, I disagree with some other reviewers who seem to consider it a necessity on every Disney ride. Cosmic Rewind does a great job of using its screens and set pieces to create an enjoyable physical environment without detracting from the coaster experience, which is rightfully the focus here.

The end of the ride features a rotating set of scenes with some choice Drax the Destroyer quips in Dave Bautista’s excellent deadpan delivery. I expect several of his lines to become part of the Disney park fan lexicon in short order.

Motion sickness has been reported enough on the attraction that there have been reports of guests being offered barf bags and trash cans being moved to handle the demand for….well, vomiting, I guess. I personally did not feel any such effects on my three rides, nor did I witness anyone else looking visibly sick at the exit platform. You can read guides like this for tips on how to minimize motion sickness risks on the ride.

A word on Epcot purism and sightline scolds

You can’t address any addition to Disney World’s second theme park without running into certain Disney fans’ Epcot dogma — namely that its initial 1980s version was perfect and injecting intellectual property and characters into it is sacrilege.

Cosmic Rewind obviously violates these tenets, but that ignores their shaky premise. As unique as Epcot was at its beginning, its earnest edu-tainment approach saw attendance slump after initial interest waned, with those disappointing figures among the factors that weighed down Disney’s stock price and led to the ousting of Walt Disney’s son-in-law Ron Miller as CEO. Miller’s successor, Michael Eisner, had a quick fix: bring in Mickey Mouse and other Disney characters.

Even the curmudgeonly WDW News Today acknowledged in 2018 that “the majority of guests welcomed the change.” 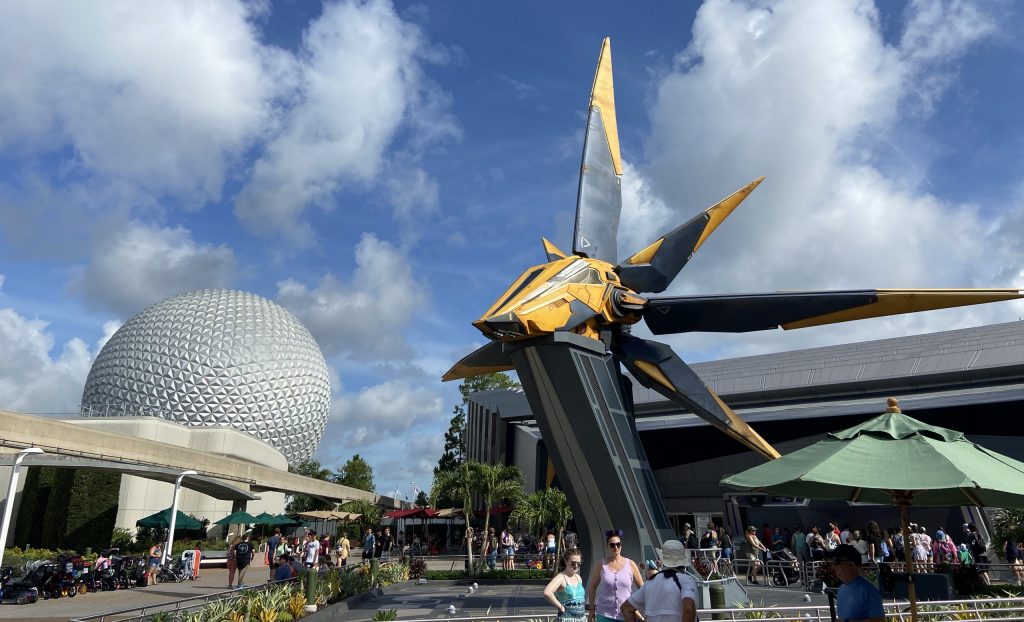 While I think keeping Disney-owned characters out of a Disney theme park is silly, I do believe that resorts with multiple parks, like Disney World and Universal Orlando, should give each park a distinct identity. Modern Epcot certainly has issues in that regard, but if the focus of the World Discovery section is science, technology and space travel, it’s hard to argue the Guardians don’t fit. More importantly, I can’t think of a Disney World park where this attraction would be a better fit, either in a thematic or practical sense. It’s undoubtedly an improvement over what it replaced, too.

Another oft-repeated Cosmic Rewind complaint that deserves to be dismissed is the visual intrusion of its show building. The 140-foot-tall structure, newly built for the coaster, is indeed visible from across World Showcase Lagoon, with the only attempt to mask it being its sky blue paint job. And to that I say — who cares? 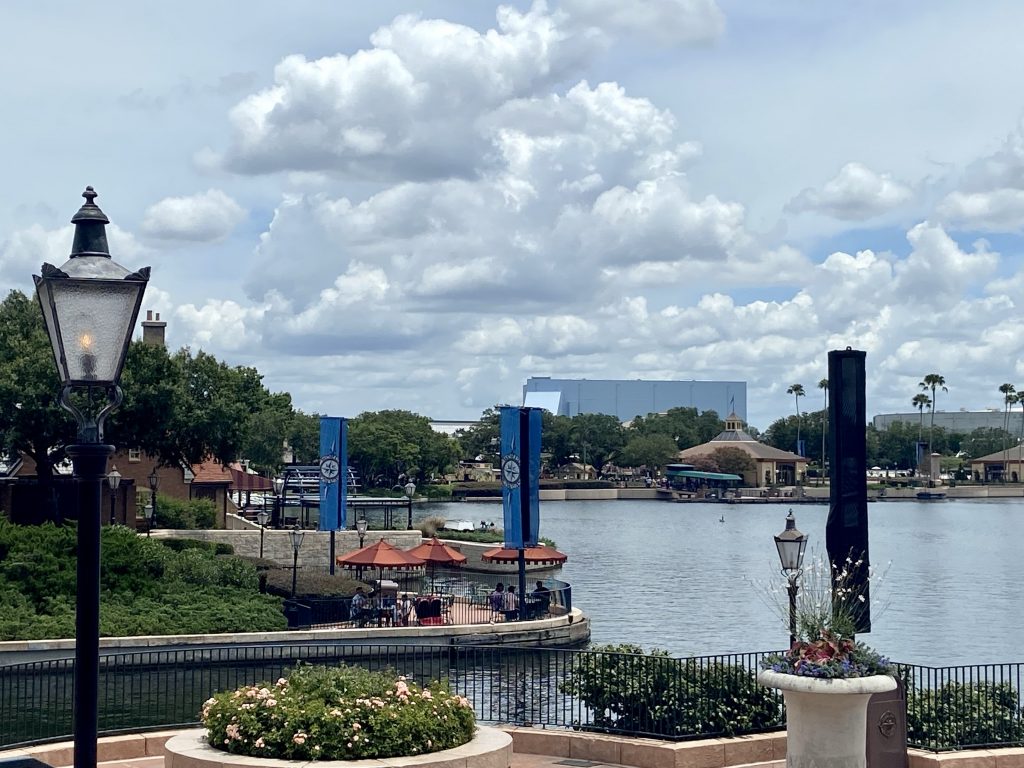 The fact that I can see the show building at certain places within the park is neither unexpected, given its size, nor consequential when considering the experience of the attraction itself. To me, arguing that being able to see the Guardians building from World Showcase, reeks of selective outrage about thematic integrity (especially since genuinely distracting “Harmonious” barges will likely be in your view, too). Perhaps it’s just a convenient complaint so Epcot purists can justify their predetermined disdain for this attraction.

Considering many other thematically inconsistent structures are also visible from similar spots in the park (like the third theater for Soarin’), I don’t believe there’s a legitimate argument for armchair Imagineers saying this distant visual intrusion seriously affects your enjoyment of the park.

When Disney spends $500 million on any ride, you expect it to be among the best of the best. Guardians of the Galaxy: Cosmic Rewind is precisely that, setting a new standard for a high-tech, indoor coaster without skimping on thrills. In fact, the only thing keeping this from an A+ grade is the recasting for Bradley Cooper.

It also gives Epcot the top-tier thrill ride that it has needed for decades, and will help draw people back after years of seeming more like a construction site than a real theme park. Most importantly, it’s just undeniably fun.

You need to go overseas to find great examples of Disney Imagineering when this one ride is worth the plane ticket to Orlando all on its own. If only we had a jump point to speed things up.

DISCLOSURE: This review is based on my own opinion and perspective. I paid for my own park ticket.  Disney World did not grant me any special access to Epcot or the attraction in order to conduct this review.