After seeing any Marvel Cinematic Universe film with Spider-Man, what part of that character’s world and powers did you want to experience?

Slinging webs across New York City? Fighting off his incredible rogues’ gallery? Those are all good, reasonable, even expected answers.

But did you ever say, “I want to wave my arms frantically at a generic villain?” Because Disney seems to think that’s what fans wanted.

Web Slingers: A Spider-Man Adventure is the only new ride guests can experience at Avengers Campus in Disney California Adventure. An interactive dark ride in the vein of Toy Story Mania, Web Slingers does set itself apart by basing the shooting mechanism entirely on tracking riders’ movements; no gun or targeting device is needed, just your own arms.

Fleeting fun from your flailing arms aside, this technological leap forward cannot mask the banality of everything else in the attraction.

The queue and preshow

The premise of the attraction may sound familiar to theme park fans. There’s an “open house” at a place, something goes wrong, guests are recruited to help. In this case, the place is the Worldwide Engineering Brigade (WEB, get it?), a program funded by Tony Stark whose group of young science prodigies include Peter Parker, secretly Spider-Man. Various signs and props around the queue flesh out the backstory, and even include Easter eggs for Marvel Comics fans with mentions of lesser-known characters like Squirrel Girl. 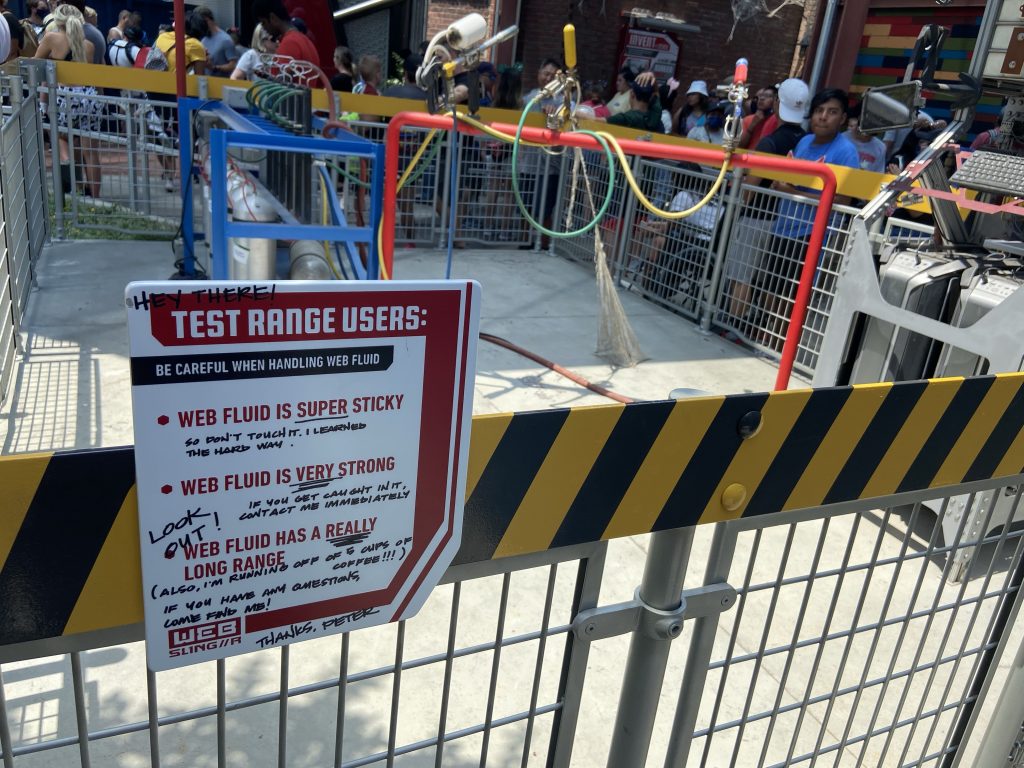 A portion of the Web Slingers queue (Theme Park Tribune)

The mostly outdoor queue space leads to a preshow video where Parker, played by Tom Holland, explains that guests will be testing out vehicles that let regular people shoot webs just like Spider-Man. Then comes the problem: Small robots called Spider-Bots begin multiplying rapidly, forcing Parker to find Spidey — and ask for guests’ help, of course — to help clean up the glitch before the entire Avengers Campus is destroyed.

The premise itself is familiar but inoffensive, but already, the ride’s greatest flaw has been exposed: a bland villain.

Even if you’ve only seen the two Spider-Man films set in the MCU, you’ve seen some of the memorable baddies on Parkers’ enemies list, including Vulture, Mysterio, and Shocker. Comics fans are well aware that Spider-Man has one of the best rogues’ galleries of any superhero.

None of these are your target in Web Slingers, or even the mastermind behind some dastardly plan. Instead, you’re fighting off hundreds of Spider-Bots, creatures with no deeper meaning to any Marvel fan and obviously created so Avengers Campus would have another toy to sell. 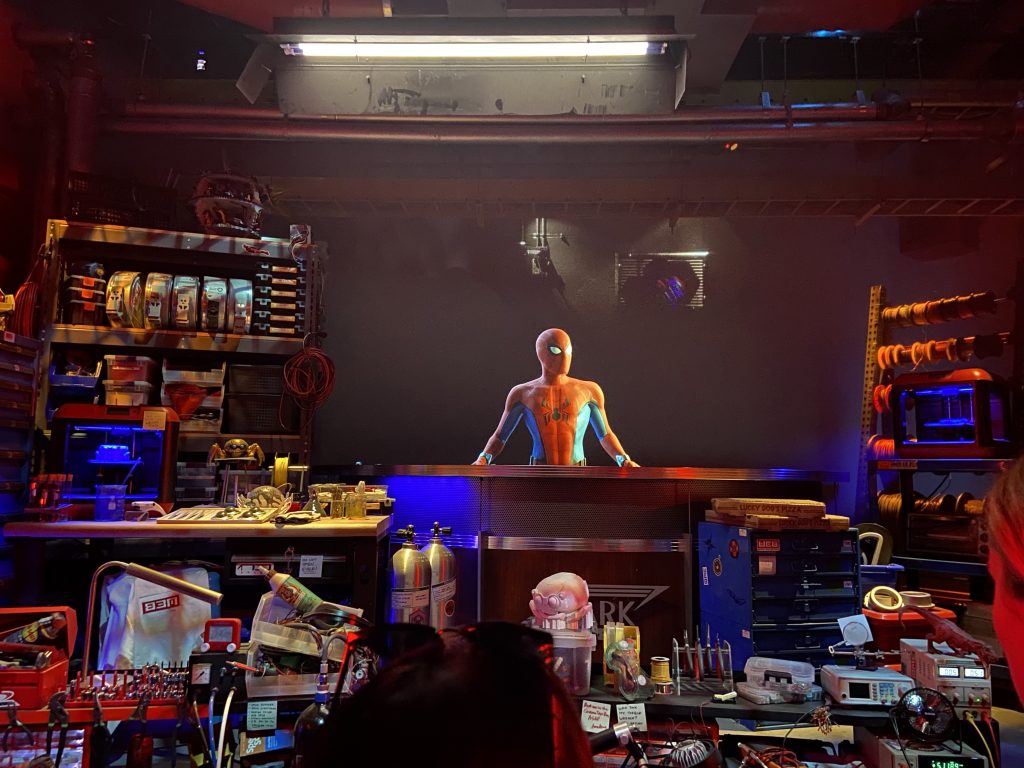 The creative bankruptcy of this choice cannot be understated. When given access to a selection of great villains to tie into this ride, Walt Disney Imagineering seemingly chose to focus only on a merchandising opportunity.

If you think I’m overreacting, go ride any of the Justice League: Battle for Metropolis clones at Six Flags parks. You may be shooting at generic robots, but the likes of Lex Luthor and Joker are still heavily featured in the ride. So if a ride commissioned by America’s budget theme park chain figured out the right balance, would it have been so hard for Disney to pick an interesting villain behind the ride’s events?

The ride system and vehicles are an upgraded version of the Toy Story Mania tech. Cars of guests — four on each side, if the ride is running at full capacity — travel from screen to screen, shooting at enemies for a period of time before moving along. 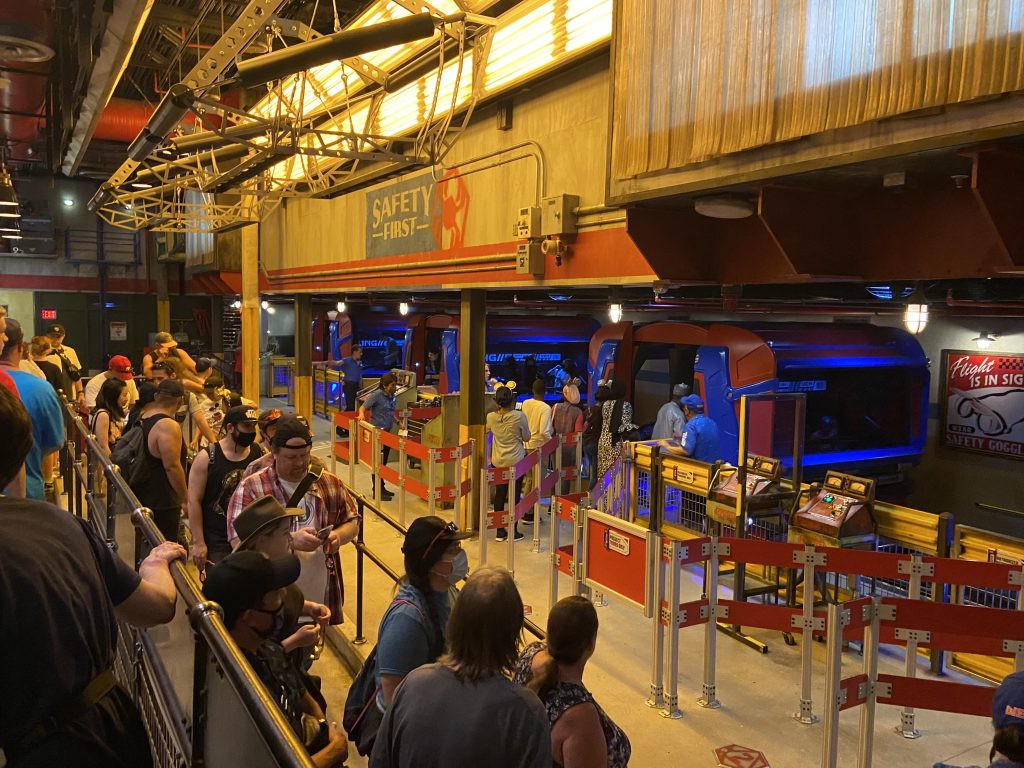 As I said earlier, the difference is there’s no gun or other device you’re using to “shoot.” All you need is your own arms, as the motion tracking system makes you believe you’re tossing Spider-Man’s webs around just like the hero himself. Even though it’s not necessary, inevitably guests mimicked Spidey’s own hand motions to enhance their own experience. You can even shoot webs that will trigger effects, like pushing buttons or levers, wiping out multiple enemies at once.

This sounds fun and immersive, in theory. In practice, it got old really quick. Your arms will tire out quickly and guests are likely to spend at least a screen or two to get the aiming down, considering there’s no device helping you aim.

All of that wrecked any sense of “Hey, I’m shooting webs like Spider-Man!” immersion. Perhaps that tactile sensation, having an actual device in your hands, is necessary in interactive shooting rides — because I just felt like a guy flailing his arms around with no idea if it was working.

I should note that I did not buy the “Web Power Bands” that can enhance the ride experience. You can read separate reviews on whether a $60 add-on is worth it at Disney Food Blog and AllEars.

So we have a generic enemy, a technologically advanced ride system which is less fun than its predecessors, all in service of an attraction which doesn’t seem to know why Spider-Man appeals to fans.

These errors are made more glaring by the fact that there’s already an spectacular, world-renowned attraction that does all these things better, The Amazing Adventures of Spider-Man at Universal Orlando’s Islands of Adventures.

Disney had to know whatever Spider-Man ride they built would be compared to Universal’s all-time classic. Yet in every comparison I can imagine, Disney’s newer ride can’t match what Universal created 22 years ago. Swinging around New York City? Check. Using memorable villains? Check. Having big battles with those villains? Check again. Even with the added element of the ultra-popular MCU, Disney’s attraction will be far less satisfying that Universal’s Spider-Man ride.

Disney apologists may say I’m judging Web Slingers too harshly because it’s the only new ride in Avengers Campus. I dare to assume that the attraction wasn’t meant to be a long-term headliner for Disney California Adventure, but considering that park’s thin lineup and the hype for Avengers Campus, Disney had to know it would be — just as they should have anticipated the negative reaction to overhyping Galaxy’s Edge before opening it without its star attraction.

In this case, Web Slingers’ flaws won’t be magically fixed if and when the Avengers attraction teased in 2019 ever opens. The new ride’s issues go beyond bad planning or unfairly judging a second-tier ride as if it were the park’s headliner.

By failing to take advantage of so much of what makes Spider-Man an iconic character inside and out of the Marvel films, I have to wonder whether Walt Disney Imagineering really attempted to understand what guests wanted.

DISCLOSURE: This review is based on my own opinion and perspective. I paid for my own park ticket. I was not granted any special access to the ride, Avengers Campus or Disney California Adventure to conduct this review.