DISCLOSURE: This review is based on my own opinion and perspective. I paid for my own park tickets.  Disney did not grant me any special access to the park or to Star Wars: Rise of the Resistance in order to conduct this review.

The Disney theme park hype machine can often seem stuck in overdrive, with fans, bloggers, influencers and sometimes the company itself speaking in such hyperbole that the real experience can never live up to lofty expectations.

But in the case of Star Wars: Rise of the Resistance, the hype is true. All of it.

The marquee attraction of Star Wars: Galaxy’s Edge sets a new high watermark for the themed entertainment industry. By stunning animatronics and massive physical sets with judicious use of screen technology — all while melding multiple ride systems into one attraction — Walt Disney Imagineering has once again redefined what a theme park experience can be. 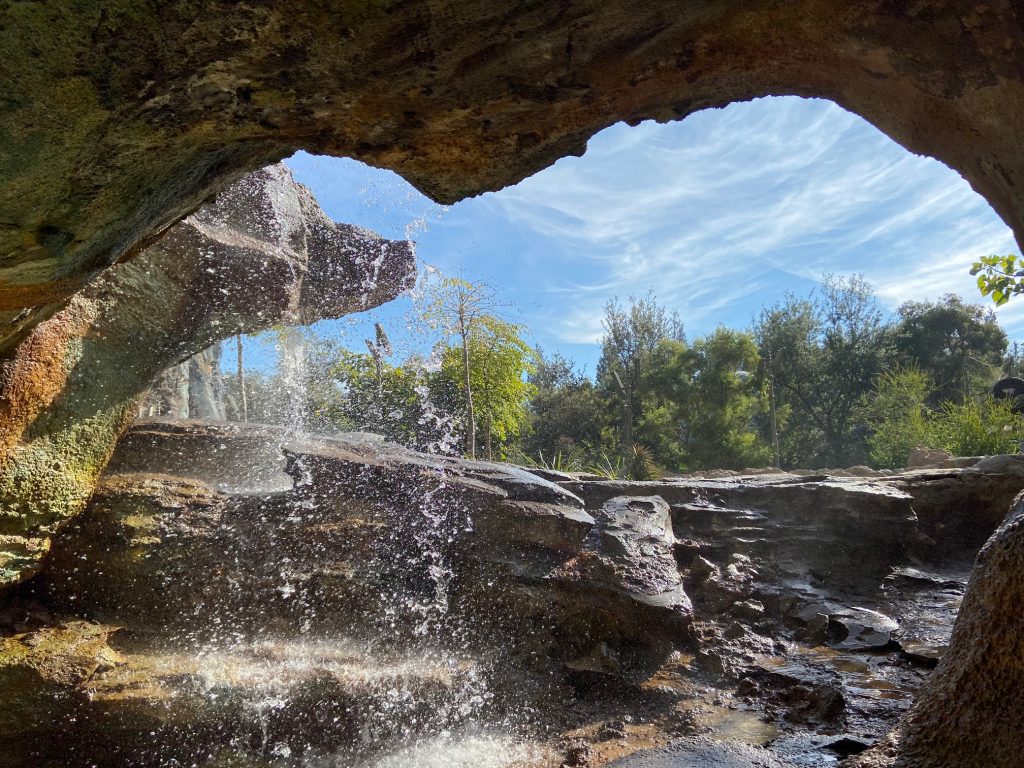 An outdoor portion of the queue at Star Wars: Rise of the Resistance (Orlando Rising)

Your immersion starts with the well-themed queue. With corridors that appeared carved out of Baatu stone and Resistance gear doubling as barriers, there’s a fair amount to gaze upon while waiting in line, but the benches set into the stonework may be the most welcome innovation.

When you arrive at the first real scene featuring an animatronic BB-8 and holographic Rey, you’ll discover the real strength of the Rise of the Resistance: making pre-shows not feel like pre-shows. 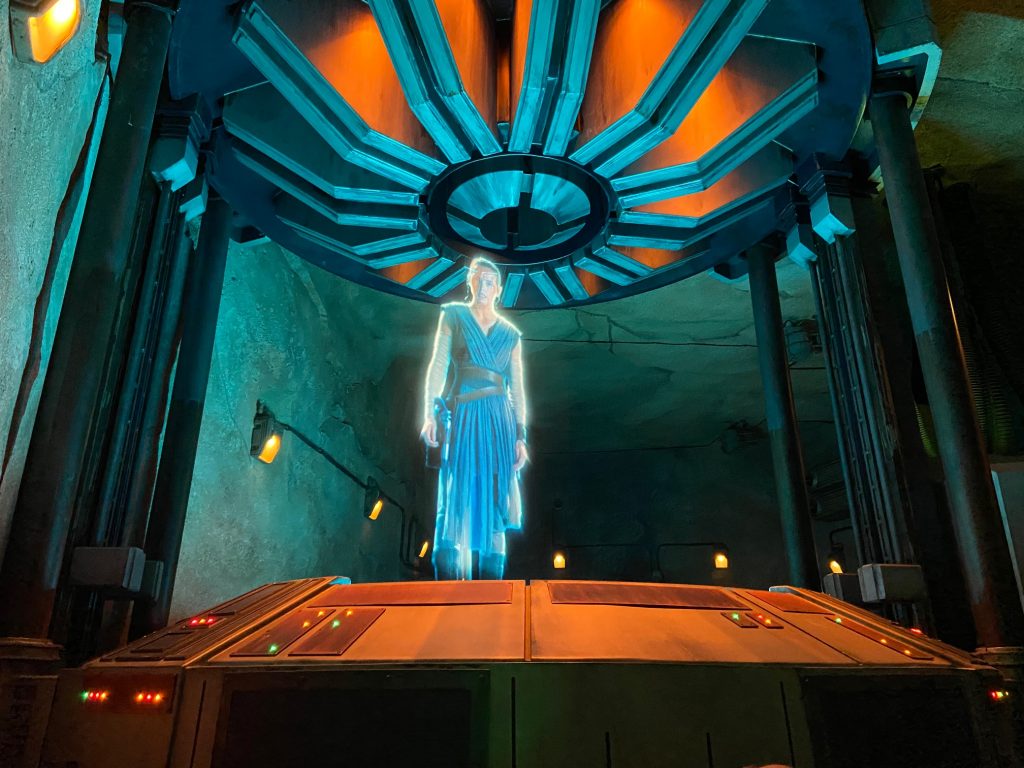 Pre-shows have long provided required safety and loading information to guests along with some mild entertainment (like Soarin’). In more recent years, Disney’s attempts to use them for some story purpose have failed to disguise that all you’re doing is killing time (I’m looking at you, “scanning” sequences on Avatar Flight of Passage). The most successful pre-show in theme park history may in fact the stretching room in the Haunted Mansion, which debuted in 1969.

In Rise of the Resistance, the pre-shows feel like an essential part of the experience. After seeing Rey’s incredible hologram, guests are led outside to a transport ship to be taken to a secret Resistance base, complete with an animatronic captain. After the First Order ambushes your transport — a battle you’ll see unfold on the multiple video screens around the ship — the same door you entered now opens into a Star Destroyer hangar. 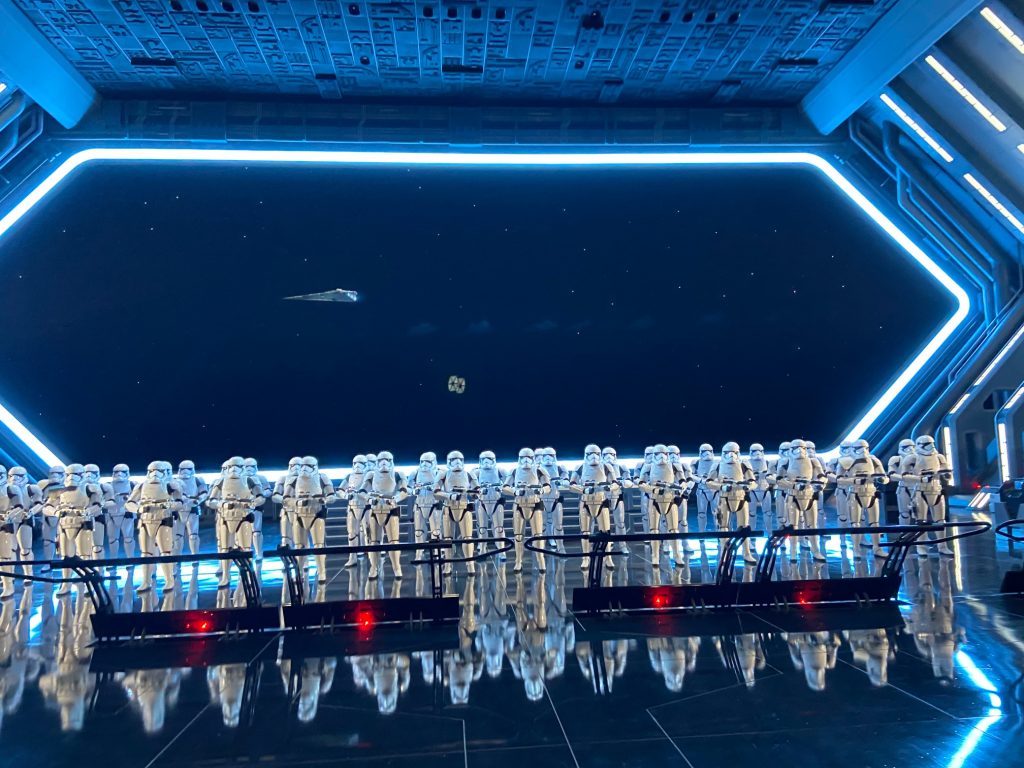 The hangar bay inside Rise of the Resistance (Orlando Rising) 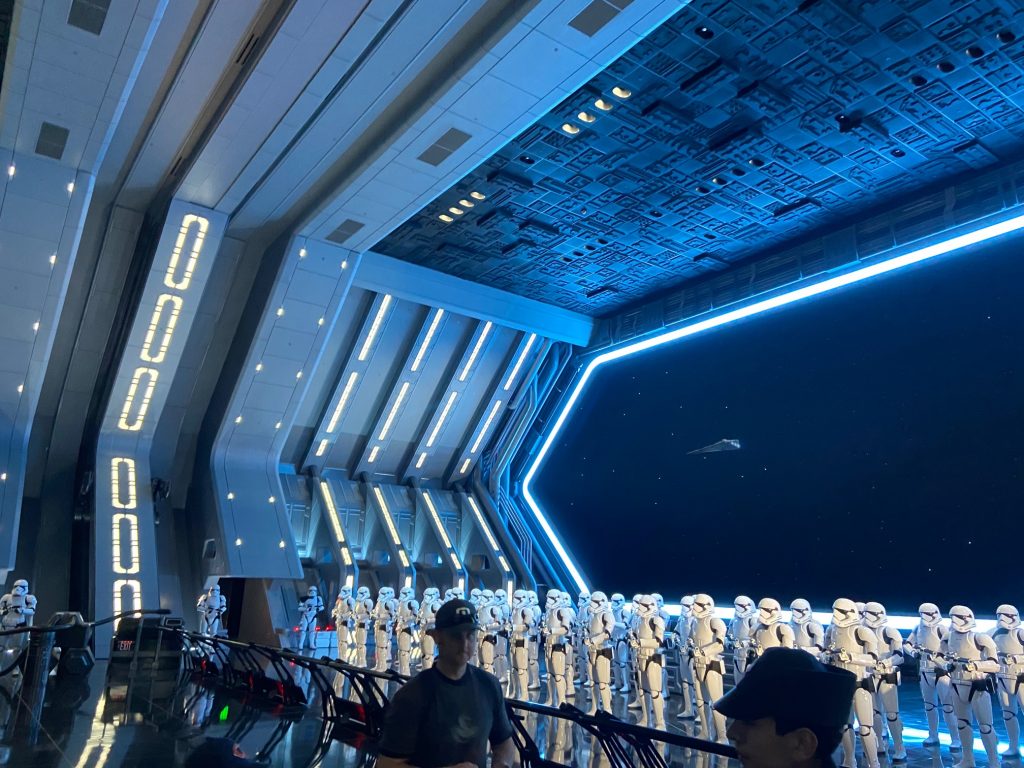 The scale of this scene is enormous (Orlando Rising)

This gigantic space is, hands down, the most amazing physical set I’ve ever seen in a theme park. Facing down dozens of Stormtroopers (enough of which actually move, making you believe they ALL might be able to do so) with a TIE fighter stationed nearby and a giant screen showing you the stars, it’s positively jaw-dropping. And it’s even more incredible when you consider the fact that you spend all of a few seconds in that space.

Having now been captured, you’ll wait in a short line before being separated into smaller groups. The cast members here were uniformly excellent in acting just rude enough to maintain their status as evil First Order underlings while serving their operational role. I witnessed one such cast member say to a mom whose kids did not want to join her in her designated color-coded spot, “They don’t seem to like you very much.” Another sternly warned: “Don’t press any buttons. You may blow us all up.” 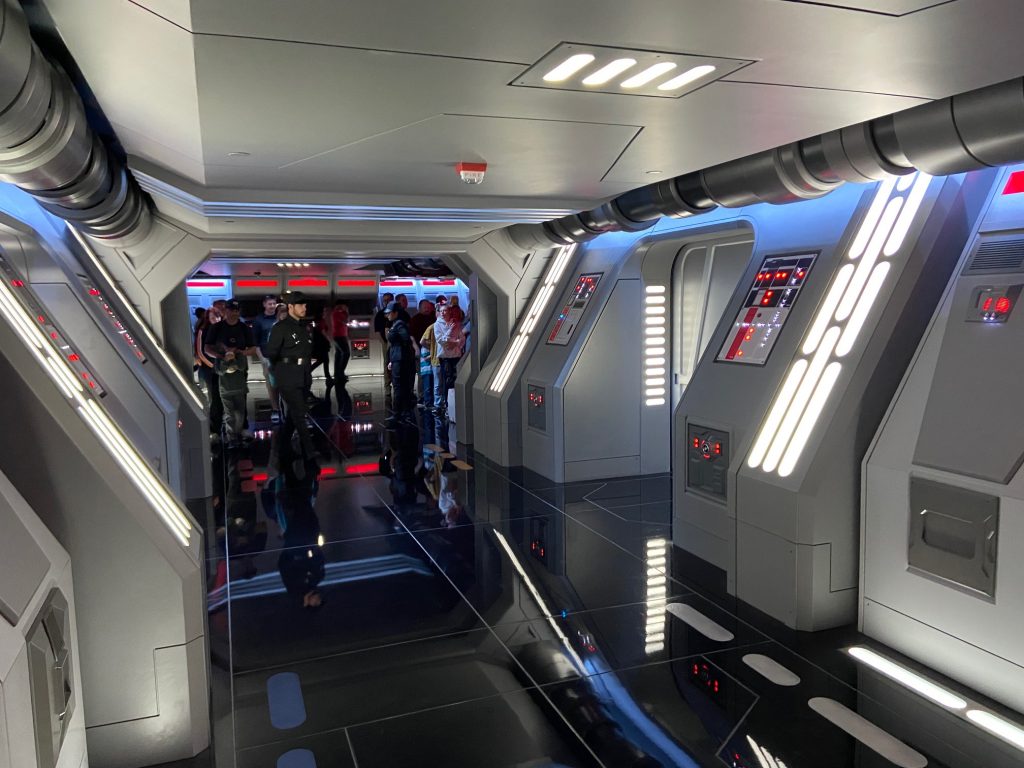 Groups of 16, with four guests assigned to four colors, are then led into an interrogation cell for the next phase of the experience. General Hux and Kylo Ren demand to know the location of the secret Resistance base. Once they are called away, a glowing outline appears on one of the walls of the cell, revealing that the Resistance has commandeered some vehicles to making a daring escape. The colors you were assigned correspond to your row in the vehicles; after all, if you’re escaping imprisonment, you need to get moving quickly.

This, finally, is the actual ride. Utilizing a trackless system that have largely been confined to Disney’s overseas parks, your vehicle will criss-cross with another, turning and spinning along seemingly random paths in yet more incredibly detailed and enormous sets. I don’t want to spoil all of the surprises along the way, but it ends with yet another transition, as your vehicle locks into an escape pod and “drops” down back to Baatu, simulating a small-scale version of a single plunge on the Tower of Terror.

For the more trepidatious theme park fan, I’d say Rise of the Resistance will provide ample, yet safe thrills. The real entertainment comes from the environment, not from any stomach-churning motions on the ride itself.

Riding Rise of the Resistance isn’t an easy task at this moment. Both Disneyland and Disney’s Hollywood Studios are utilizing a virtual queue “boarding group” system that requires you to be inside the park at its official opening to reserve a spot — and even then, there’s no guarantee. 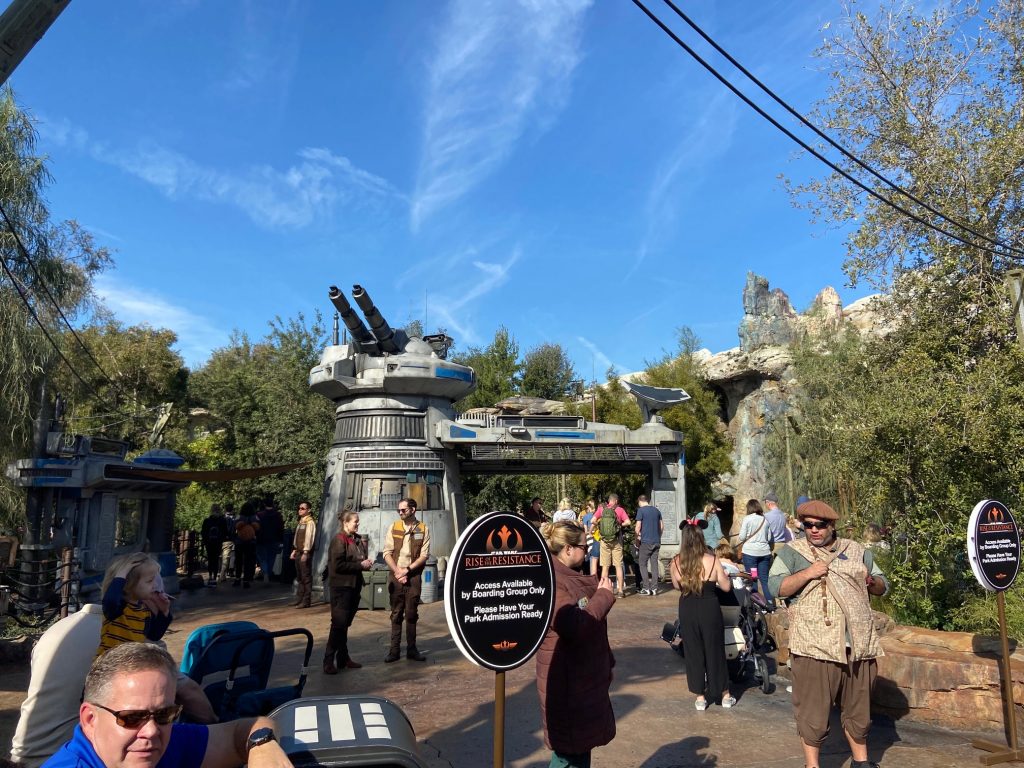 The entrance to Rise of the Resistance at Disneyland (Orlando Rising)

I managed to get a boarding group for two consecutive days I was at Disneyland. In my eyes, getting up and counting down the seconds to opening to land a spot in line was a very, very small sacrifice to make to get on this spectacular attraction.

Rise of the Resistance cannot be easily compared to any other theme park ride, simply because it feels so much more advanced than anything that has come before. No one has made physical environments this large and detailed before; no one has so successfully made typically mundane pre-shows feel so exciting; and no one has combined multiple ride systems into one complete experience. No one, that is, until Disney.

It’s in my nature to find something to criticize, but only qualm is a petty, almost unavoidable operational problem. Juggling these multiple ride systems means lines are bound to form in the middle of the attraction, namely in the Star Destroyer space between the hangar and the interrogation rooms. If this wait stretches beyond a few minutes, your  sense of immersion dissipates just slightly. You’ll find yourself thinking, “Doesn’t the First Order need to get me into interrogation quickly? I have valuable information!”

When it’s working smoothly, there’s no question that Rise of the Resistance tops anything else in the theme park industry, including outside of Disney. If Universal’s Harry Potter and the Forbidden Journey became the ride that was everything was measured against in the 2010s, I fully expect Rise of the Resistance to set the same standard in this decade. No matter how Universal responds — and there’s no doubt that they will — fans will benefit.

Editor’s Note: This review is based on the Disneyland version of Rise of the Resistance, which is identical to the version in Disney’s Hollywood Studios.