When Disney announced it would revamp Jungle Cruise in both Disneyland and Disney World’s Magic Kingdom to remove racist depictions of indigneous peoples, there was not any serious opposition to the changes.

Sure, you could single out some anonymous blogger with zero sources and a hot take, but a measly 83 people signed a Change.org petition to “save” Jungle Cruise. No one could call that a movement.

The only serious concern seemed to be whether the new Jungle Cruise would shift the attraction’s identity. Not Walt Disney’s original vision for it, mind you, because the ride hasn’t been played as a serious “True Life Adventure” in decades. I’m talking about the winking, smirking, self-deprecating Jungle Cruise, defined by the corny jokes of a talented Skipper.

Perhaps that would all be replaced by de-emphasizing the live entertainment aspect of the ride — or maybe sacrificing the familiar moments to promote the new Emily Blunt and Dwayne Johnson film?

I’m happy to say those fears were founded, and the new scenes don’t lose any of the ride’s revered kitschy spirit. 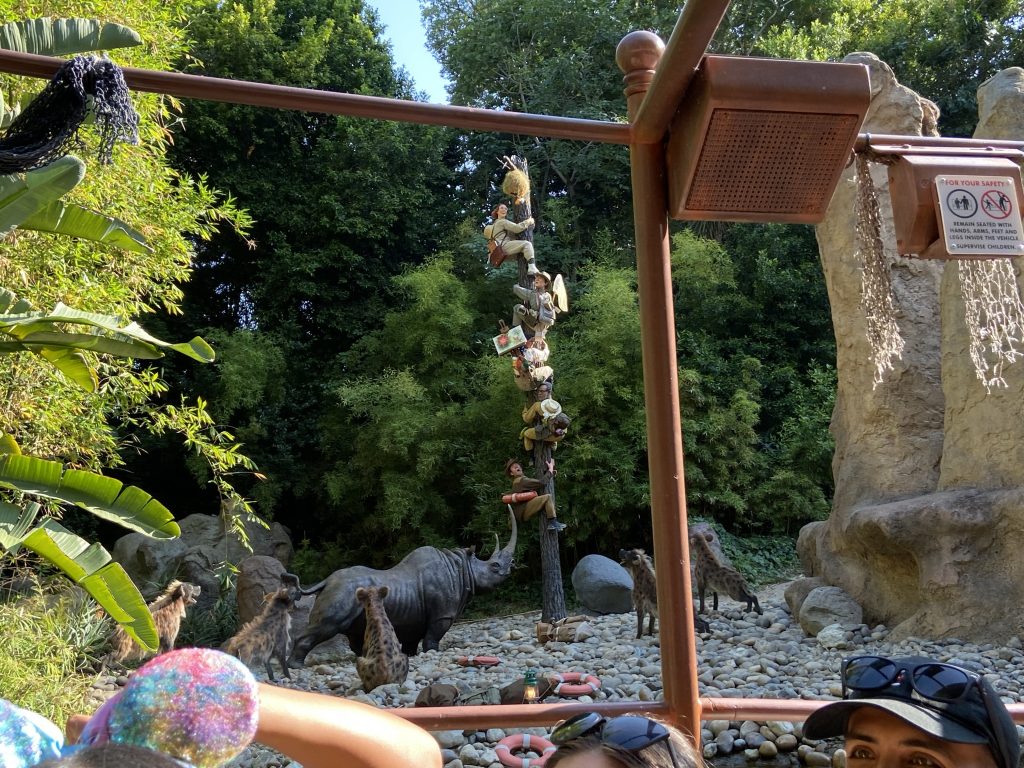 The most striking changes center on three scenes. First, the members of a “trapped safari” who have run up a tree to escape a rhino are now more ethnically diverse, depicting an artist from Mexico, a botanist from Nova Scotia and a Japanese entomologist.

These characters tie into the ride’s new, official backstory centering around this group’s doomed river expedition and the Jungle Navigation Co., though the storyline is secondary to the jokes and not a crucial aspect of the revamped attraction by any means. 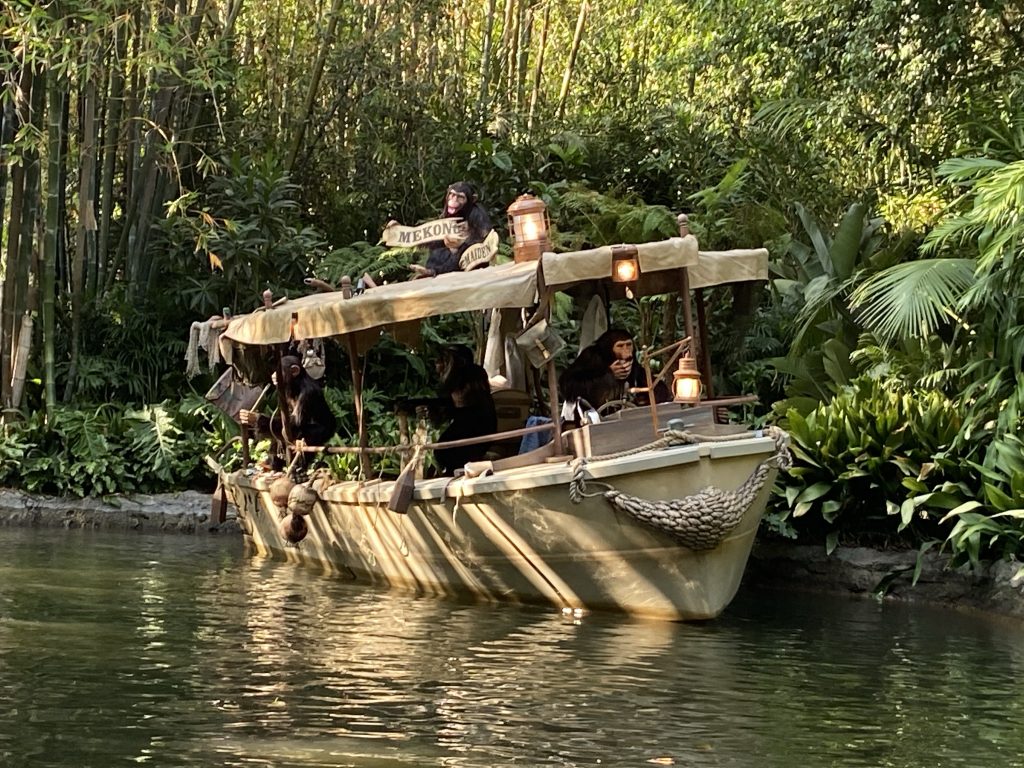 The second change removes the “dancing natives” scene. In its place, a group of monkeys are seen pillaging a wrecked Jungle Cruise boat. This is undoubtedly an upgrade, as the new scene sports better animatronics and brings them closer to guests, and it fits with existing scenes showing other primates having fun with human belongings.

The last major change comes with the replacement of Trader Sam. Gone is the stereotypical depiction of a native, replaced with a Trader Sam’s gift shop taken over by some animals and a sign that reads “Back in 15 minutes, Sam.” 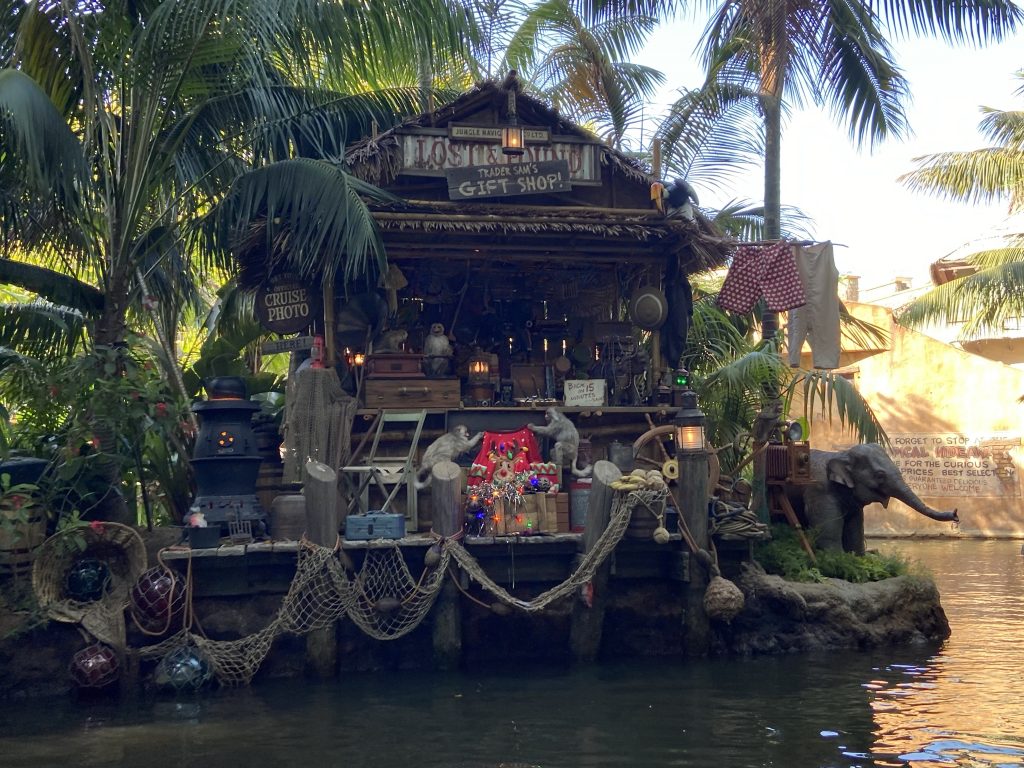 “He’s just out right now, collecting things that he’s going to sell you in the lost and found,” Imagineer Kim Irvine explained to USA Today.

This scene is arguably a downgrade because the ride loses a larger animatronic, but the character had to go. The convenient excuse of “he’s just out right now” allows Disney to simply remove him rather than attempt a less offensive replacement that risks pleasing no one.

Many of the hallmark scenes of the attraction remain, such as the elephant bathing pool and even the family of lions standing over their zebra dinner. Longtime fans will still hear the same “dad joke” humor throughout new and old scenes, so the ride’s heart remains the same.

Unless you’re the type that considers any alteration of a Disney attraction to be sacrilege, you can’t honestly find fault with the updated attraction.

It’s important to remember that Jungle Cruise has been changed dozens of times since it debuted in 1955, and while there could be a legitimate gripe if it had become dominated by references to a new film, that didn’t happen. If offensive depictions of indigneous people were the true appeal of the ride to anyone, then of course they’ll be disappointed — but Disney clearly doesn’t care about their feelings.

So, in essence, the overhaul of Jungle Cruise works because it removes the ride’s problematic scenes without changing what so many guests have loved about the attractions. It falls only slightly short of an ‘A’ grade from me for the same reason.

Jungle Cruise’s focus on pun-filled humors and kitsch has distracted from how its animatronics and scenery had long since been surpassed by other, newer Disney attractions. That focus is too dearly beloved by Disney fans to ever change, but it also keeps the ride from being the top-tier attraction that it once was. If there was ever a moment to dramatically update Jungle Cruise, this was it.

So while the new scenes are welcome, to be sure, they are also safe additions. They certainly don’t hurt the ride, but they also didn’t take enough chances to truly improve its standing when compared to newer, more advanced Disney creations.

DISCLOSURE: This review is based on my own opinion and perspective. I paid for my own park ticket. I was not granted any special access to the ride or Disneyland in order to conduct this review.