I don’t have any clever turn of phrase to open this review, so I’ll just come out and say it: I absolutely love Universal Orlando’s Cabana Bay Beach Resort.

Plenty of other guests have felt the same way ever since the resort opened in March 2014 as Universal Orlando’s first value hotel — and the first on-site hotel Universal had opened since 2002.

It took less than 18 months for Universal and its hotel partner Loews to announce it was expanding the resort with two towers, offering 400 additional rooms, to meet demand. “It’s been so popular that we couldn’t build this fast enough,” Loews senior vice president Tom Roditus said when the towers opened in 2017. 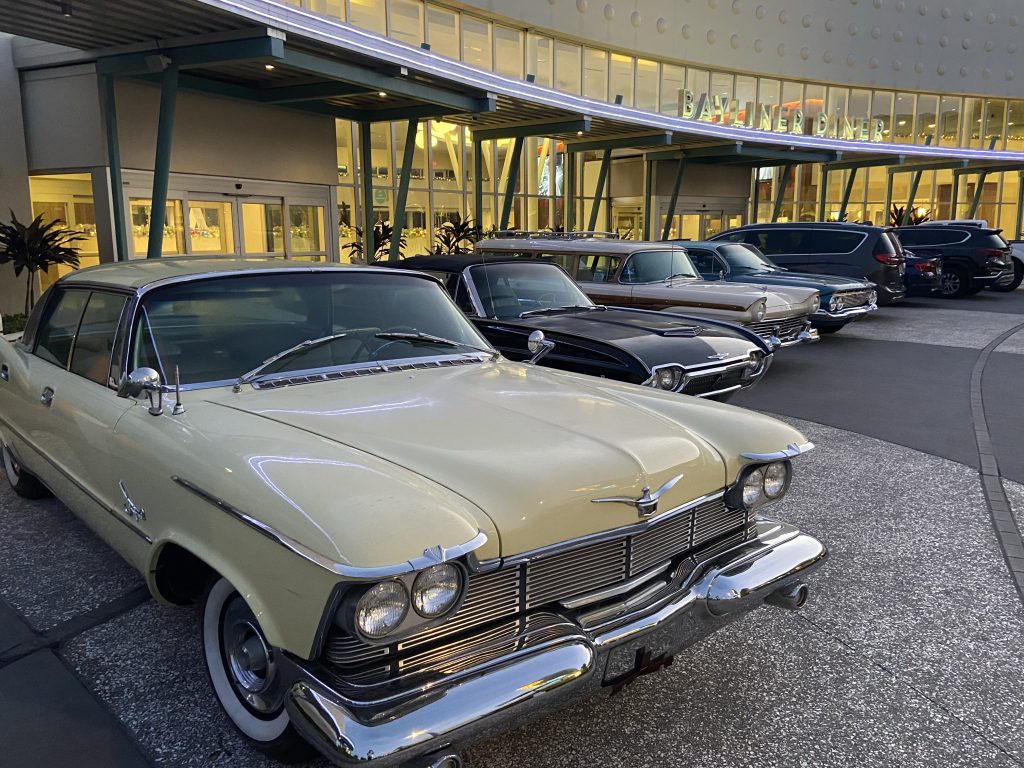 Cabana Bay is an attraction in itself, from its lovingly-detailed mid-century modern aesthetic to amenities that surpass those offered at much more expensive Disney World hotels. Even in the comparable value categories across the two destinations, Cabana Bay is significantly better than the likes of Disney’s Pop Century and All-Star resorts while significantly undercutting the Mouse on price.

I’ve stayed at Cabana Bay multiple times, though my earlier experiences came before I reviewed hotels professionally. I had stayed in one of the resort’s newer towers, in a standard room slightly larger than similar rooms in other buildings. 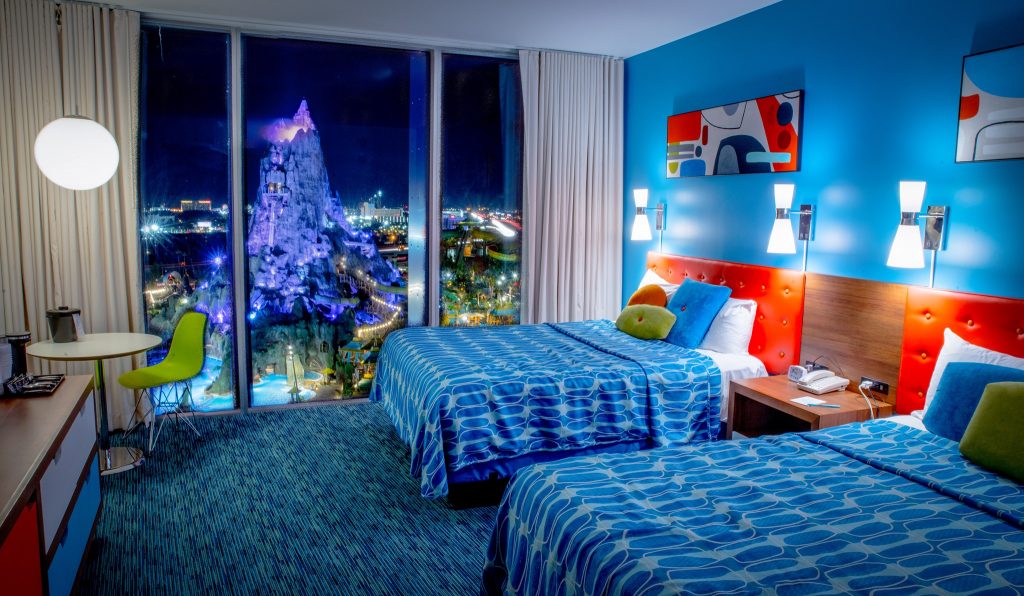 For my 2021 visit, I stayed in one of the resort’s family suites. While not spacious enough to comfortably sleep six as advertised, it’s more than enough for a group of four. Considering that discounts offered to Universal annual passholders often bring family suite prices down to as low as $120 per night, it’s a bargain. 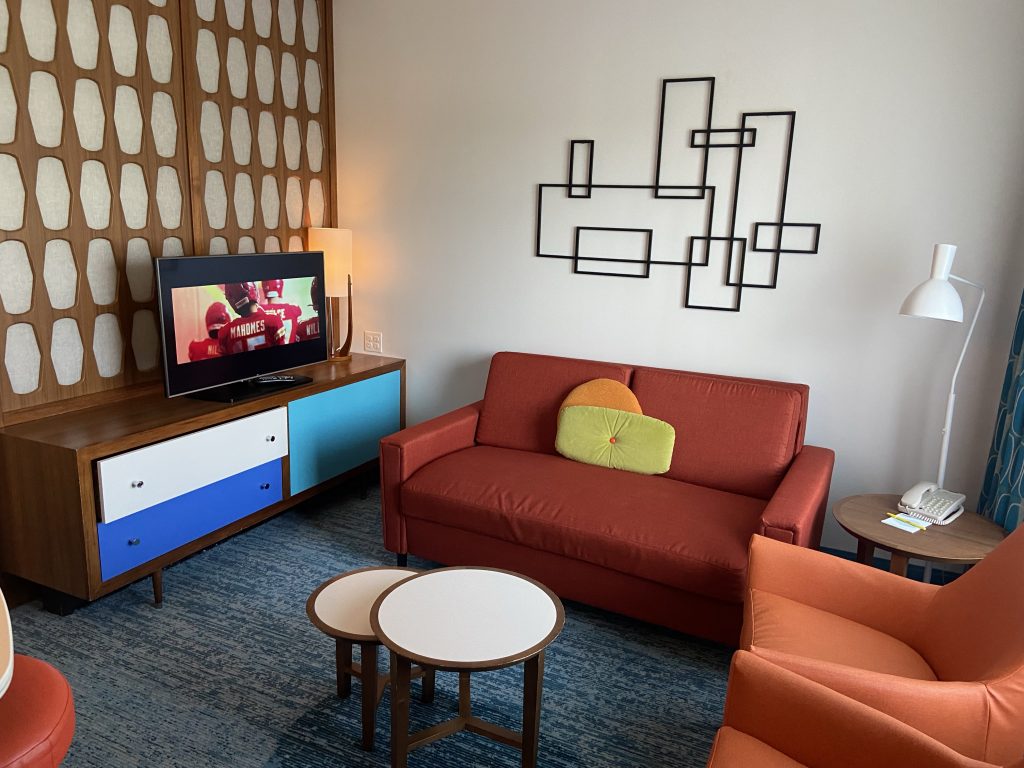 Keep in mind that the “family suites” don’t offer the same kind of separation as the suites at Disney’s Art of Animation, smaller Disney Vacation Club villas, or other hotel accommodations that are called “suites.” The sliding partition will not block noise or light from the opposite side, so it still very much feels like the whole family is sharing a room.

If your group needs more personal space, you’ll have to upgrade to the two-bedroom suites, which offer two bathrooms and an additional 342 square feet of space, but often cost another $200 or more per night than the family suites — beyond the price point I’d personally consider a “value” resort.

Check out my video room tour for a closer look at the family suites:

Because of the resort’s size, room location matters a lot. 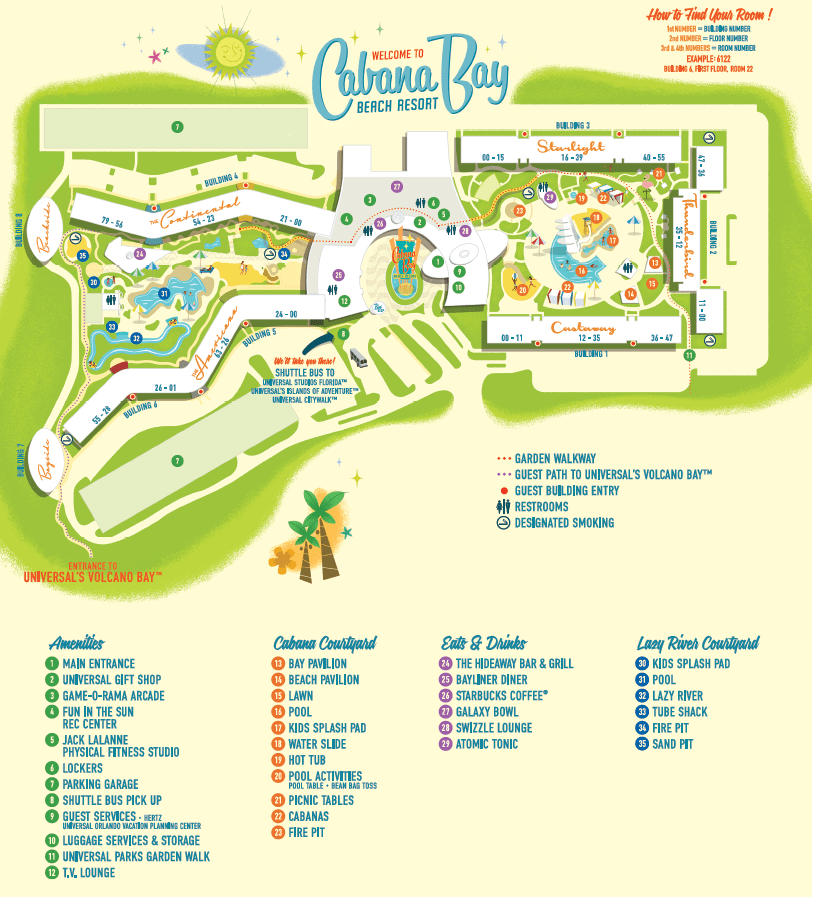 Map of the resort (Universal)

The towers do offer convenient entrance into Volcano Bay, but make for a much longer walk to the theme park bus stop and certain amenities, such as the Starbucks location. I would recommend rooms in any of the other buildings for that reason alone, but if you get assigned to the towers anyway, it won’t be a major inconvenience.

The pool amenities at Cabana Bay are arguably the best on Universal property. To the north, surrounded by the exterior entry rooms, you’ll find the Cabana Pool, which features a slide that ends under a faux diving tower. 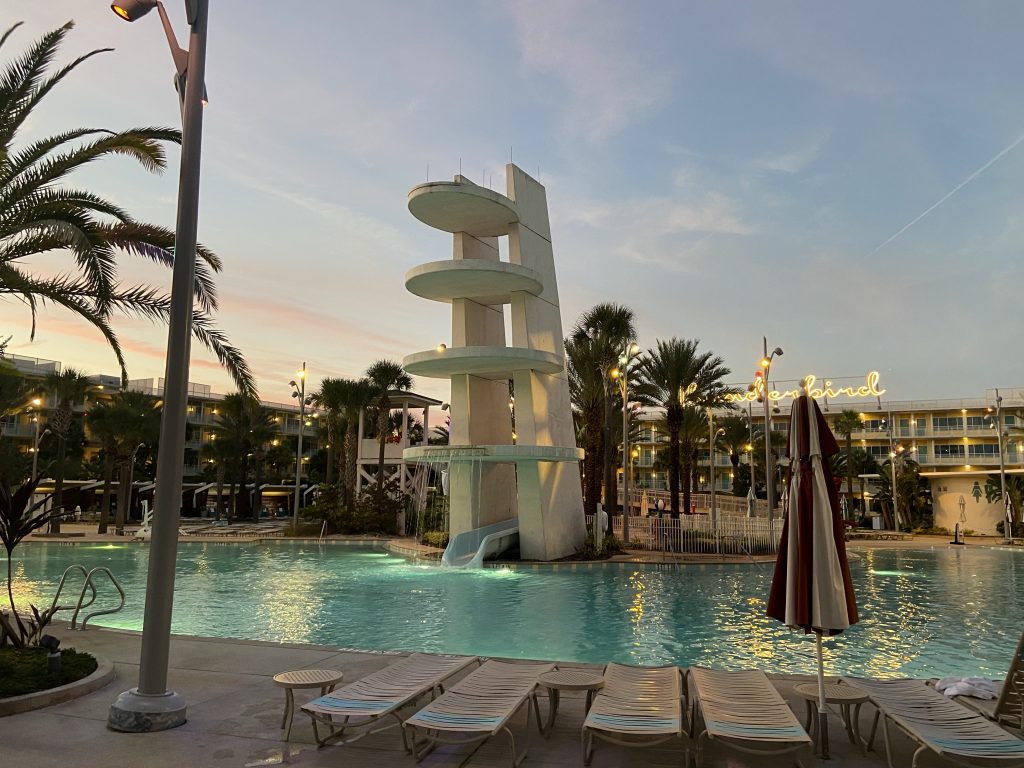 The south end of the resort features the Lazy River Courtyard pool, which, as you may have guessed, features a lazy river — something only matched by one Disney hotel pool, Stormalong Bay at the Yacht and Beach Club. 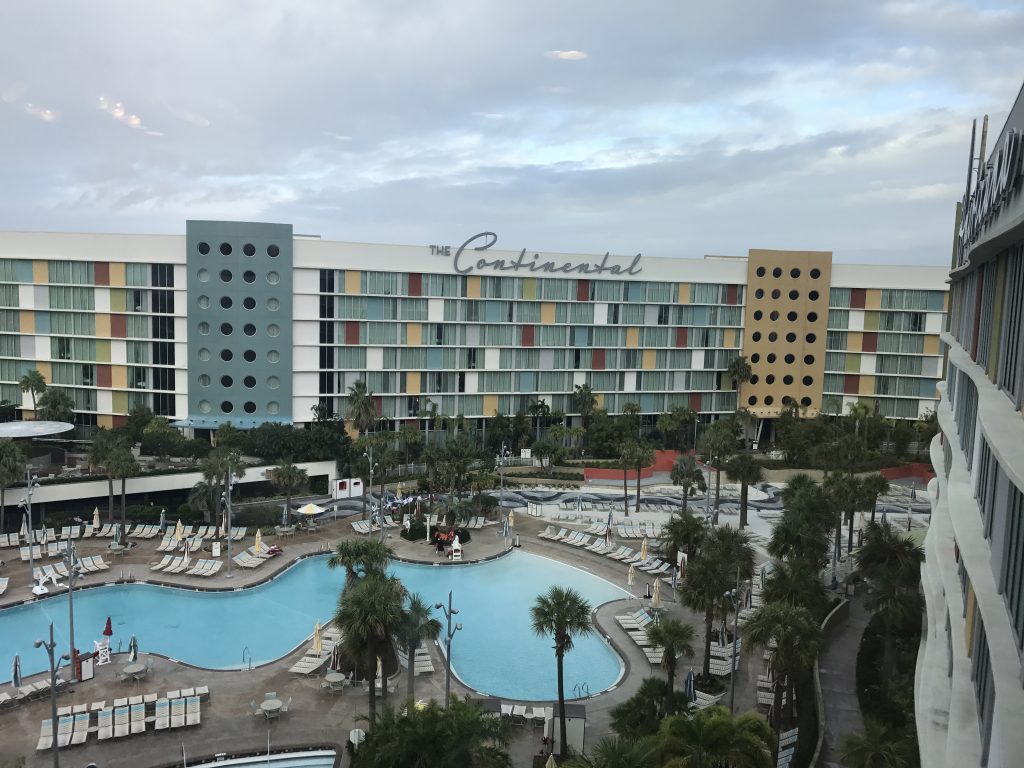 There’s no slide on this side, but the two pool areas do share other features. Both have pool bars (Atomic Tonic at the Cabana Pool and The Hideaway at the Lazy River Courtyard), as well as hot tubs, sandy areas and plenty of lounge chairs. I would personally spend more time in a lazy river than on a slide these days, but having two high-quality pool areas makes it all the more tempting for families to dedicate an entire day just enjoying the hotel. 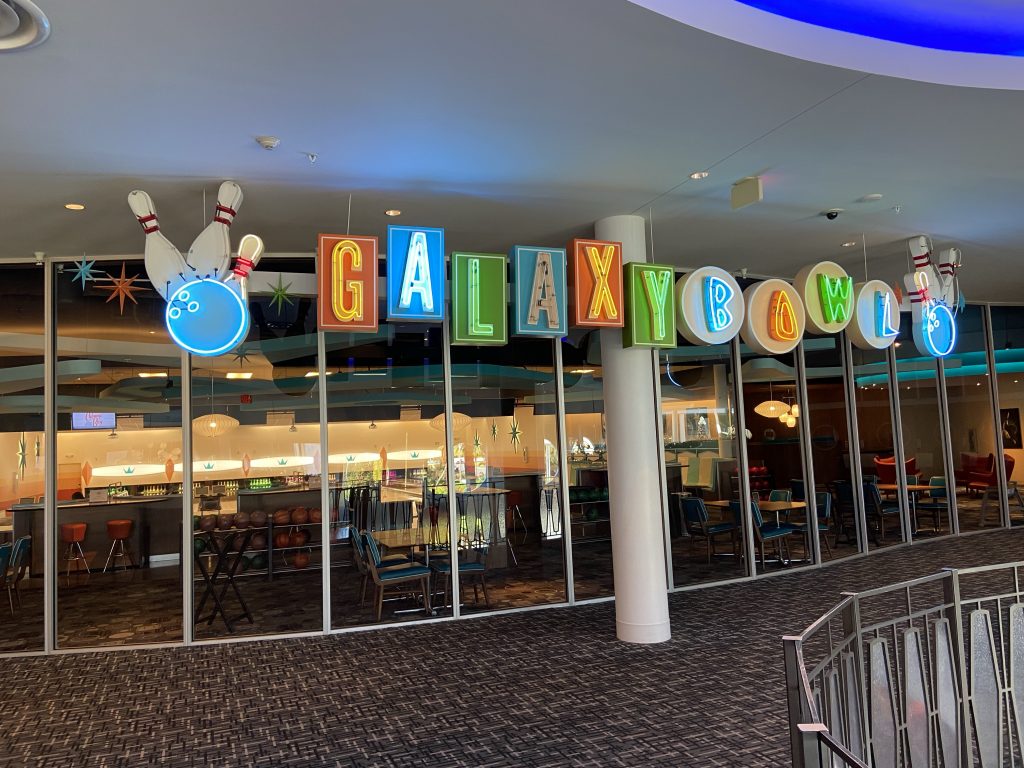 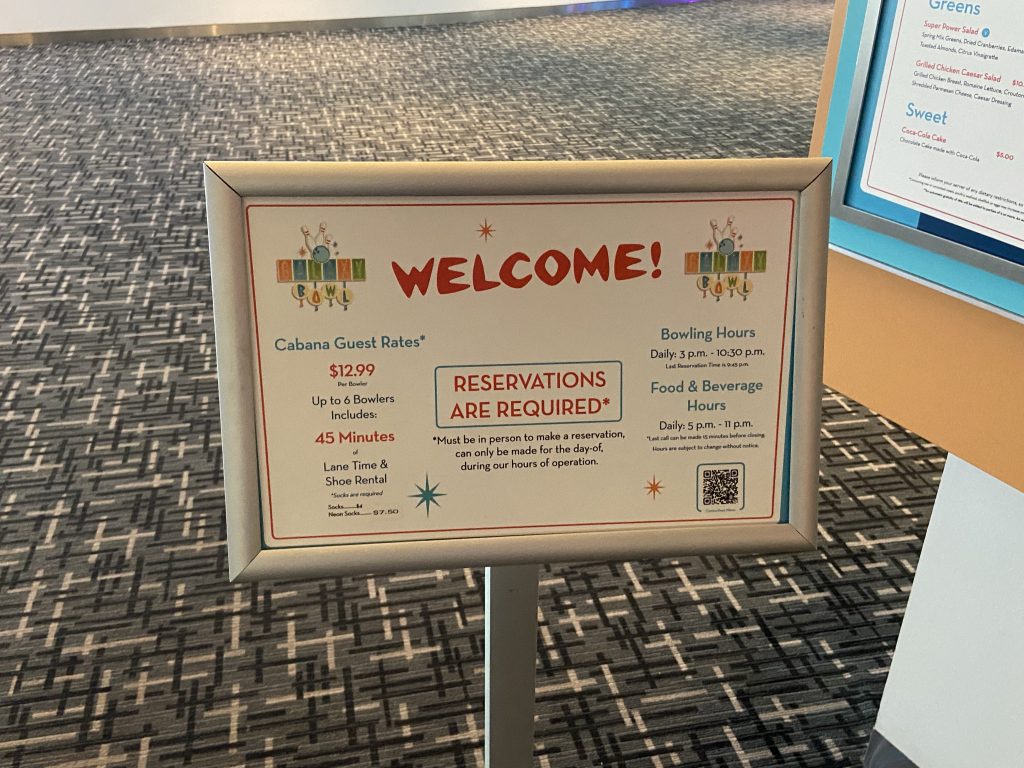 Supposedly inspired by Hollywood Star Lanes from “The Big Lebowski,” the alley is a bit pricey ($17 for adults and $11 for kids 9 and under, shoe rental included), but offers the perfect activity for a hotel day. Be warned, however, its 10 lanes are not enough to satisfy demand for its limited 3 p.m. to 10:30 p.m. hours, so get there close to opening to minimize your wait. 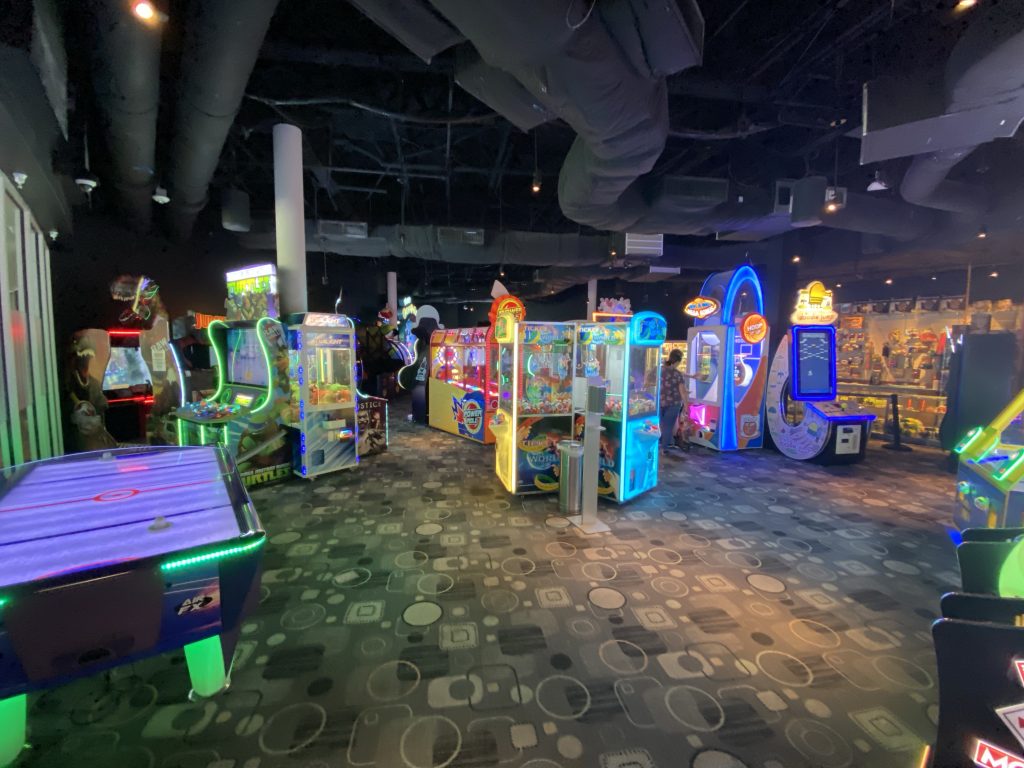 A view inside the Game-O-Rama arcade (Theme Park Tribune)

Game-O-Rama is larger than most arcades built in Orlando theme park hotels in the 2010s, though not as big as what you’ll find at some older Disney value resorts. You’ll also find the Jack Lalanne Fitness Studio on the second level of the lobby. Even if you’re not looking for a work out on your vacation, you have to admire how even the gym fits with the resort’s theme. 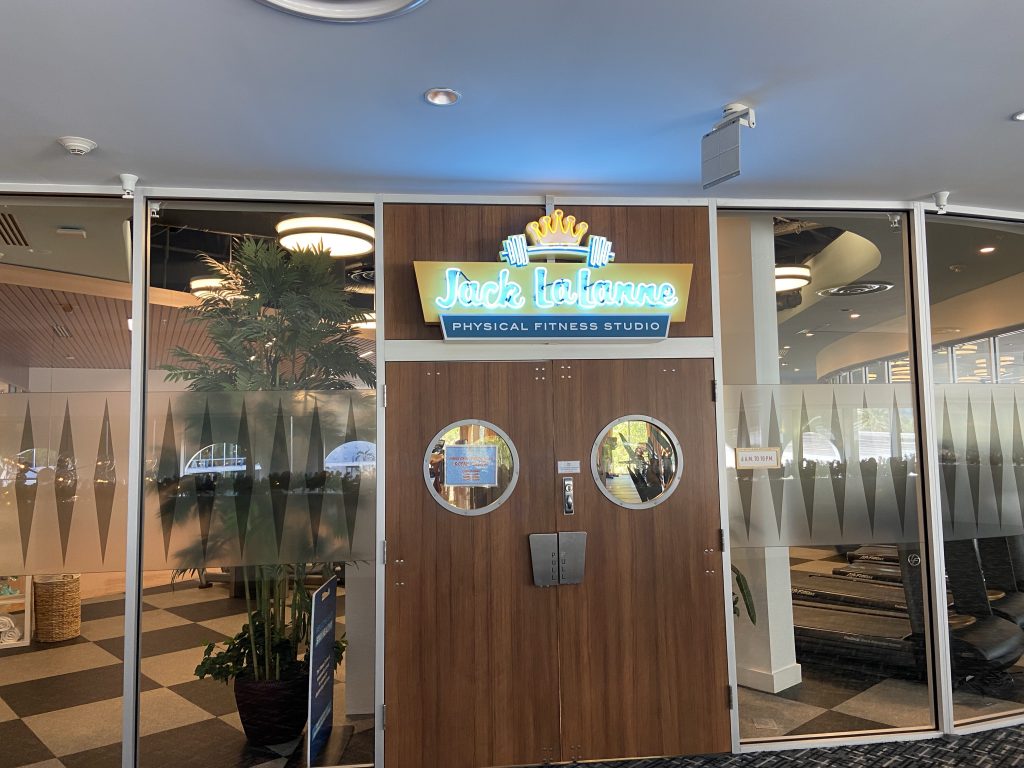 Even the gym fits the theme (Theme Park Tribune)

Like other Universal hotels, Cabana Bay features a Universal Studios Store. A large resort fittingly has one of the larger stores, offering a smattering of merchandise you may have missed from the parks alongside quite a few Cabana Bay-branded items. 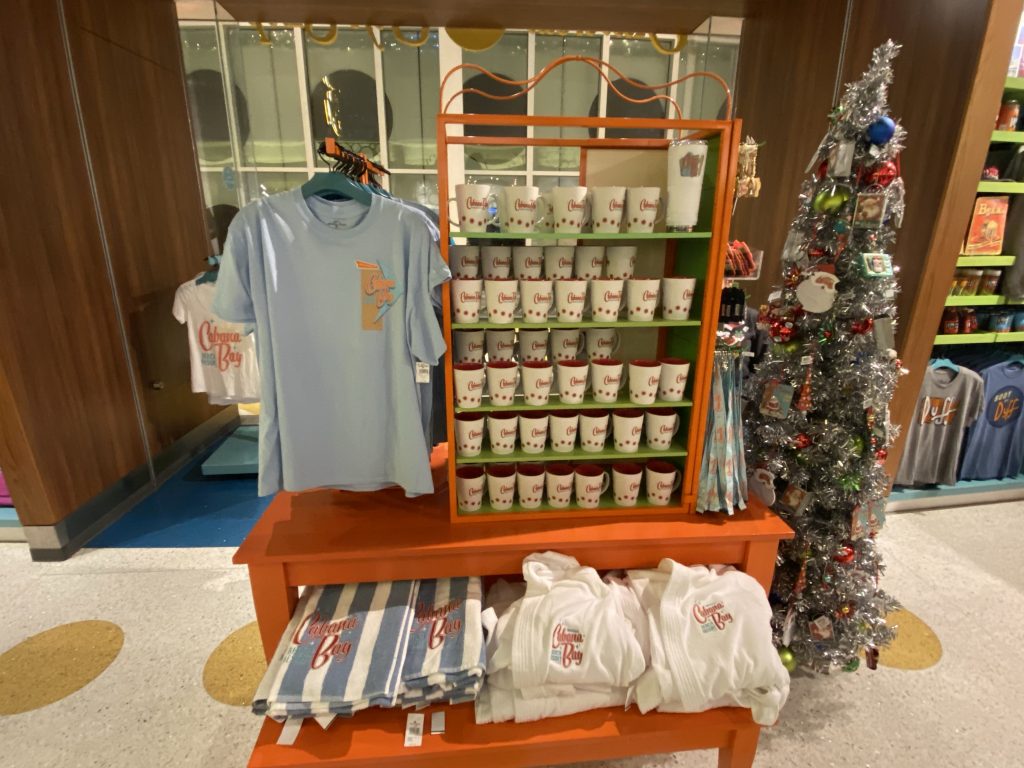 If I have to quibble with Cabana Bay’s amenities, I do see some small flaws with its transportation options.

While you’ll never wait long for the shuttle bus service, the bus often adds a stop at Aventura Hotel across the street and drops you off just before the large security checkpoint. This is a less convenient location than the water taxi system, which drops guests off in the middle of CityWalk, close to the theme park entrances, and spares them the longer security lines that are also used by guests coming through the parking garages.

You may be tempted to skip the bus service and use the Sapphire Falls boat launch, but Universal obviously thought of that workaround and made it too inconvenient to be practical. The first hurdle is the lack of a pedestrian crossing on Adventure Way at the Cabana Bay entrance — and I would not recommend taking the risk of dodging traffic. Then there’s the Garden Walk option, which does cross the north end of Adventure Way, but then takes such a twisting route towards Sapphire Falls’ main building that any time savings from using the boat launch are canceled out.

Unless Universal decides it wants to create a bus dropoff closer to the theme park entrances for resort guests, just suck it up and take the bus. The service is still faster than most Disney buses, even though extra steps through CityWalk can be a pain (literally) at the end of a long theme park day.

As with other value resorts at both Disney and Universal, the main food option at Cabana Bay is a food court. The Bayliner Diner features food stations serving everything from waffles and made-to-order omelets at breakfast to pizza and Hawaiian pulled pork sandwiches for lunch and dinner.

Like other Universal food courts, I tend to gravitate towards the surprisingly-excellent pizza. I don’t have a varied enough palette to be a food critic, but I am a Chicagoan who loves pizza, so I can say with confidence that these Universal hotels make damn good pizza. Otherwise, the food at Bayliner Diner can best be summarized as as good, but not great, like most other hotel food courts.

The best feature of Bayliner Diner, however, has nothing to do with the food. Large screens in the cavernous cafeteria play segments of vintage commercials on a loop. I caught more than a few seniors breaking out in big smiles after recognizing an old ad that they hadn’t seen since childhood. 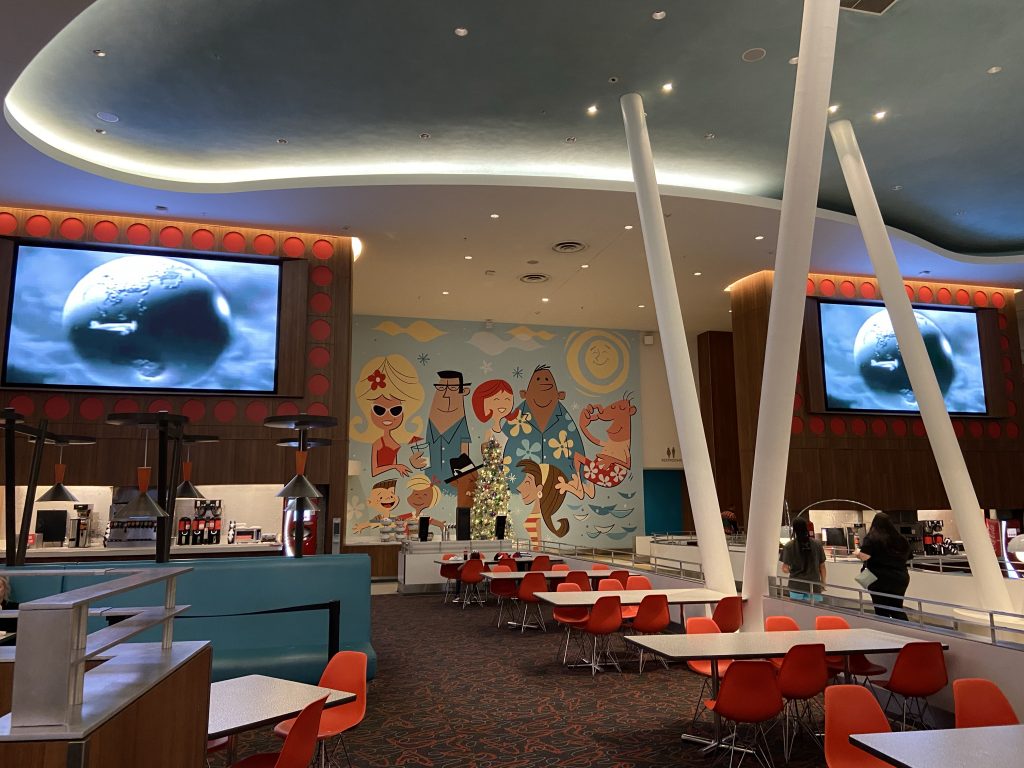 You can find more sandwiches, salads and kids menu options at the resort’s two pool bars, Atomic Tonic and The Hideaway. Galaxy Bowl actually qualifies as a table service restaurant, serving greasy favorites befitting a bowling alley like burgers and wings — though I’d stick to appetizers here and only if you’re waiting for a lane to open up. 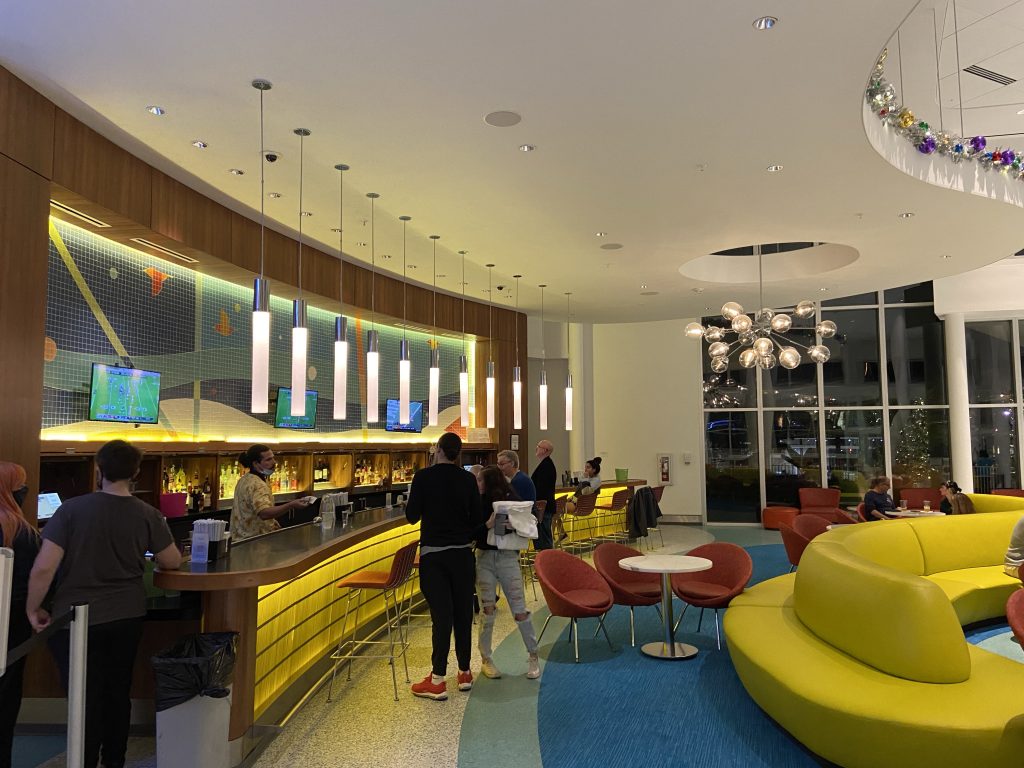 Alcoholic beverages can be found at the two aforementioned pool bars and the Swizzle Lounge located in the lobby. Like other Universal hotels, there’s a Starbucks in the lobby.

Waits in the morning can often top 20 minutes, so don’t assume that this will be a quick stop for coffee on your way to the bus. If you time it right, getting Starbucks at the hotel should still be faster than getting it in CityWalk or inside the theme parks.

A big part of why Universal’s Cabana Bay Beach Resort is such a success is the fact that nothing feels like a cheap “value” hotel. The aesthetic is lovingly maintained down to the smallest details. The pool areas feature amenities that Disney only offers at one of its highest-priced resorts. And rather than only offering guests less, Cabana Bay has exclusive features all its own, such as Galaxy Bowl. 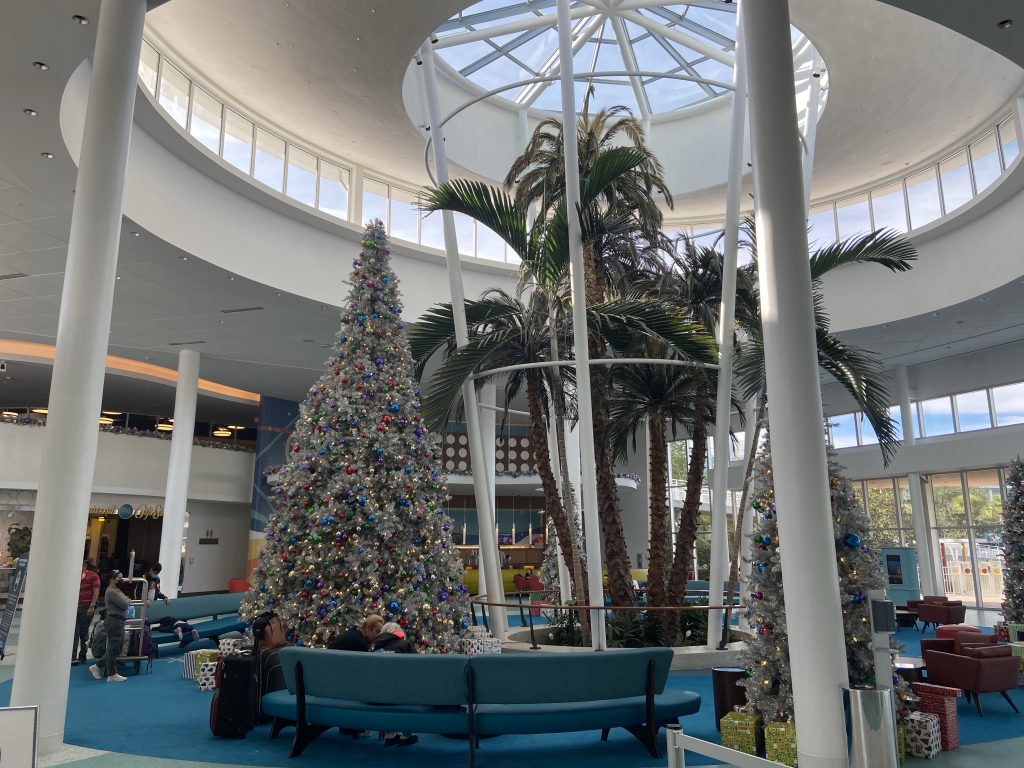 It’s very easy for theme park hotels to phone in these amenities when proximity is enough to attract many guests. Cabana Bay offers much, much more. You simply cannot match this hotel in terms of bang-for-your-buck in the Orlando area — and it’s telling that Disney, so far, hasn’t even tried.