Disney owns the top two film franchises of all time: “Star Wars” and the Marvel Cinematic Universe. Yet when it comes to bringing those films alive in theme parks, the approaches ended up quite different.

Star Wars: Galaxy’s Edge chose to create a new environment, one not seen in films, and adhere to a strict continuity to set the land in the time period of the trilogy produced by Disney. Due to late stage budget cuts, it lacked performances that could liven up the area. 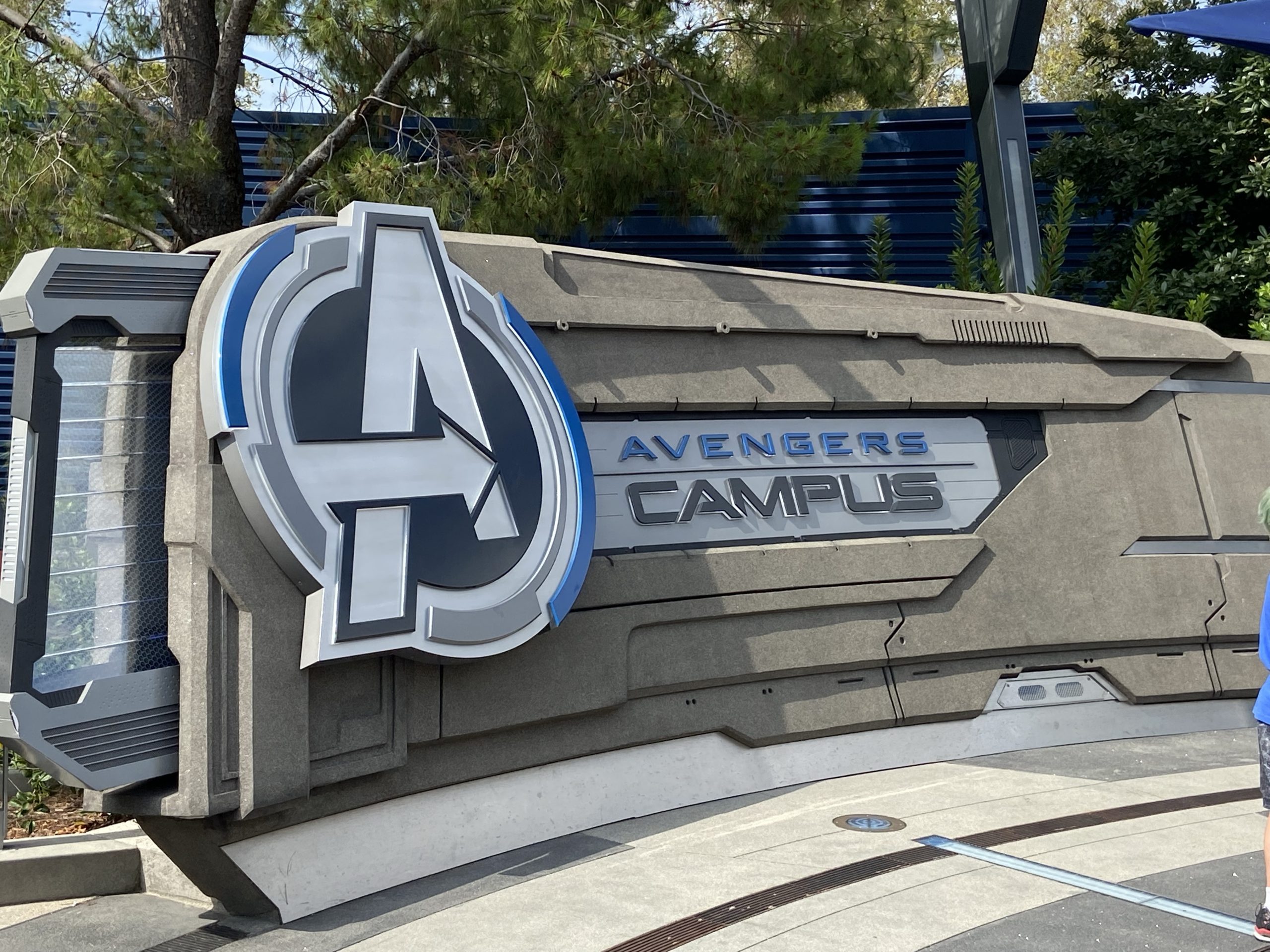 Not to beat a dead Wampa, but Galaxy’s Edge was not the immediate success Disney assumed it would be. Opening the greatest Disney ride ever a few months later certainly helped, though the COVID-19 pandemic made it difficult to discern whether that solved all of the land’s problems. 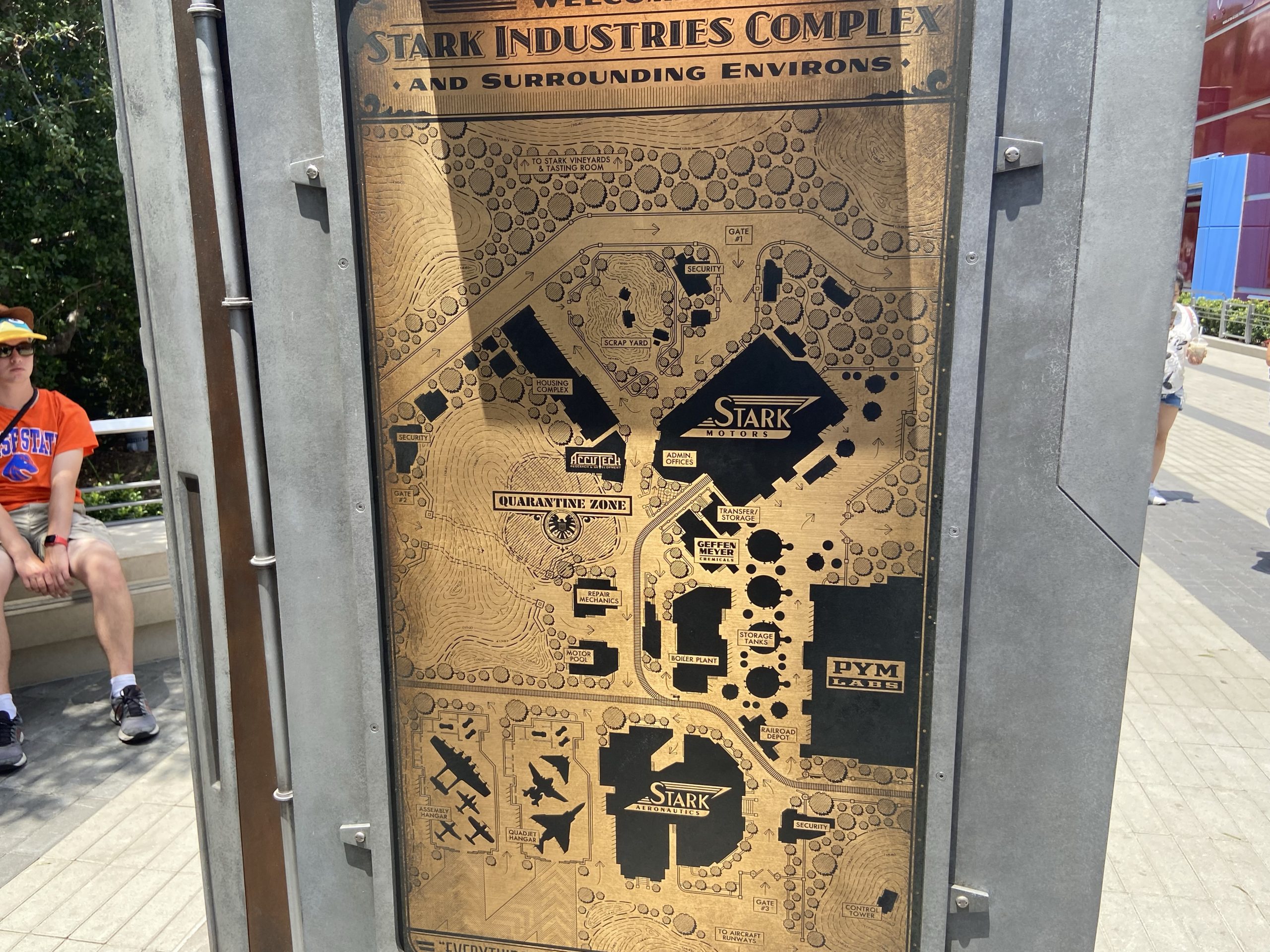 If you still want to argue that Galaxy’s Edge didn’t have issues, then my Exhibit A would be Avengers Campus — the first big land Disney has opened since Galaxy’s Edge that just so happens to address some (but not all) of those criticisms. 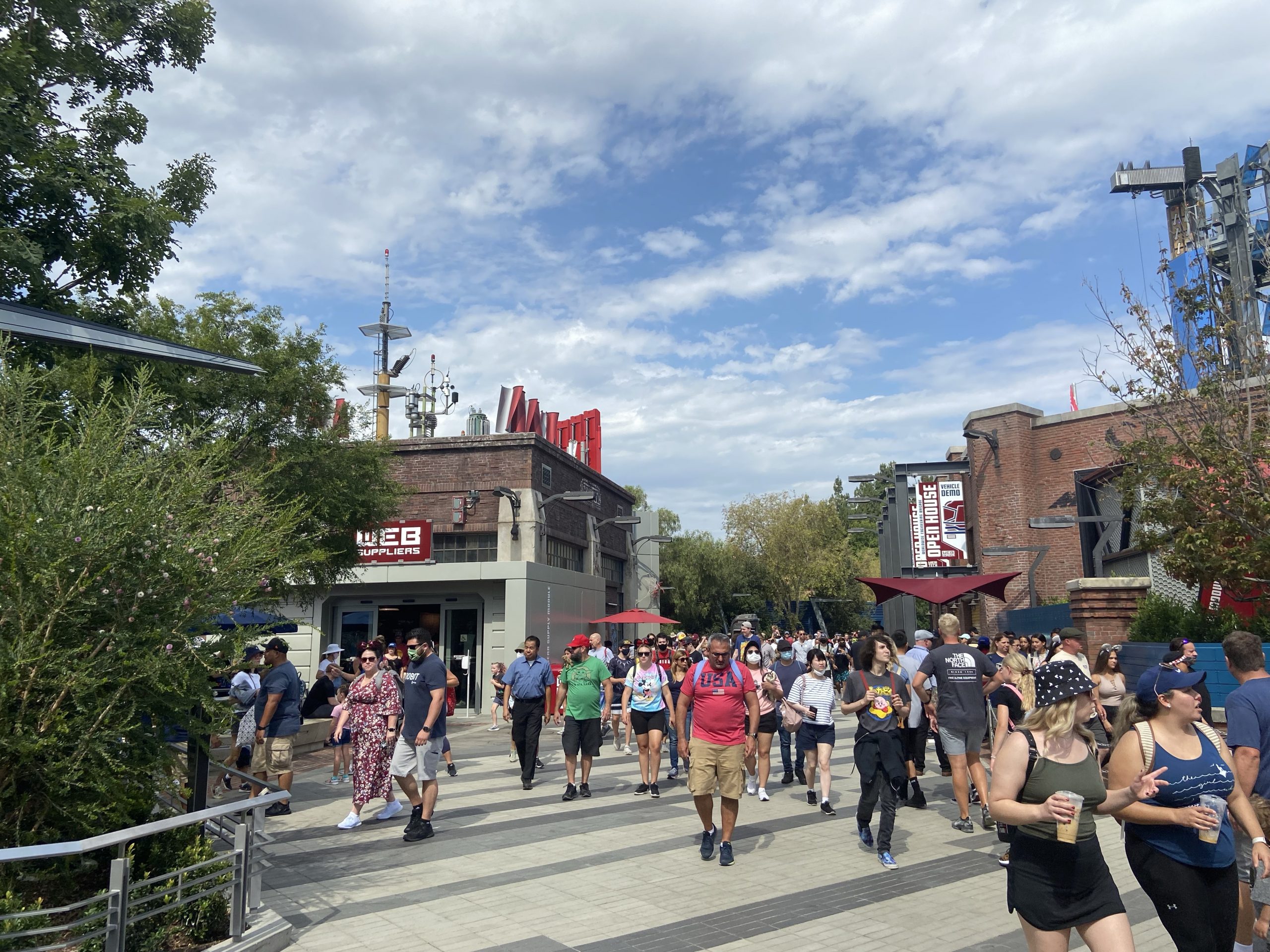 While it doesn’t recreate any area seen in the Marvel Cinematic Universe films, it does feel alive — something Galaxy’s Edge couldn’t quite pull off.

Numerous, spontaneous-feeling stage shows and character appearances may actually make “Star Wars” fans a bit envious over what could have been.

In a span of less than 45 minutes, I saw three performances within the land. The first was undoubtedly the best, all thanks to the Spider-Man “stuntronic” flying over Avengers Campus. Sure, the entire Spidey “show” really boils down to that one big moment, but it’s a moment that will impress even the most jaded theme park or Marvel fan.

Moving on from the land’s front entrance, I grabbed a spot for the “Avengers Assemble!” performance that came just 15 minutes after Spider-Man. The version I saw — since characters can vary on occasion — was Black Widow and Black Panther battling the Taskmaster along the roof of Avengers headquarters. It’s not hard to get a spot to see this show, but not all viewing locations are created equal. Standing near Pym Test Kitchen provides the most consistent view.

15 minutes after that, I saw “Warriors of Wakanda: The Disciplines of the Dora Milaje!” This features some light interactivity between performers and guests — basically a call and response — but not much else. It’s fine for adding more atmosphere, but pales in comparison to the first two shows.

The “Guardians of the Galaxy: Awesome Dance Off!” show typically begins sometime after noon in front of the Mission:Breakout! ride, and it’s not much more than it sounds like. The “Guardians” characters dance, it’s fun, and it’s also the same show that existed here pre-Avengers Campus.

You’ll have to wait until mid-afternoon to catch the last bit og Avengers Campus entertainment, “Dr. Strange: Mysteries of the Mystic Arts.” If you can catch a good spot for this one — not easy, given that it’s not on a raised stage — you’ll see Dr. Strange go over some mystical abilities while protecting Avengers Campus from Dormammu.

The show can vary, sometimes featuring a special Thor appearance, and is better at night to get the full impact of the excellent lighting around the area. 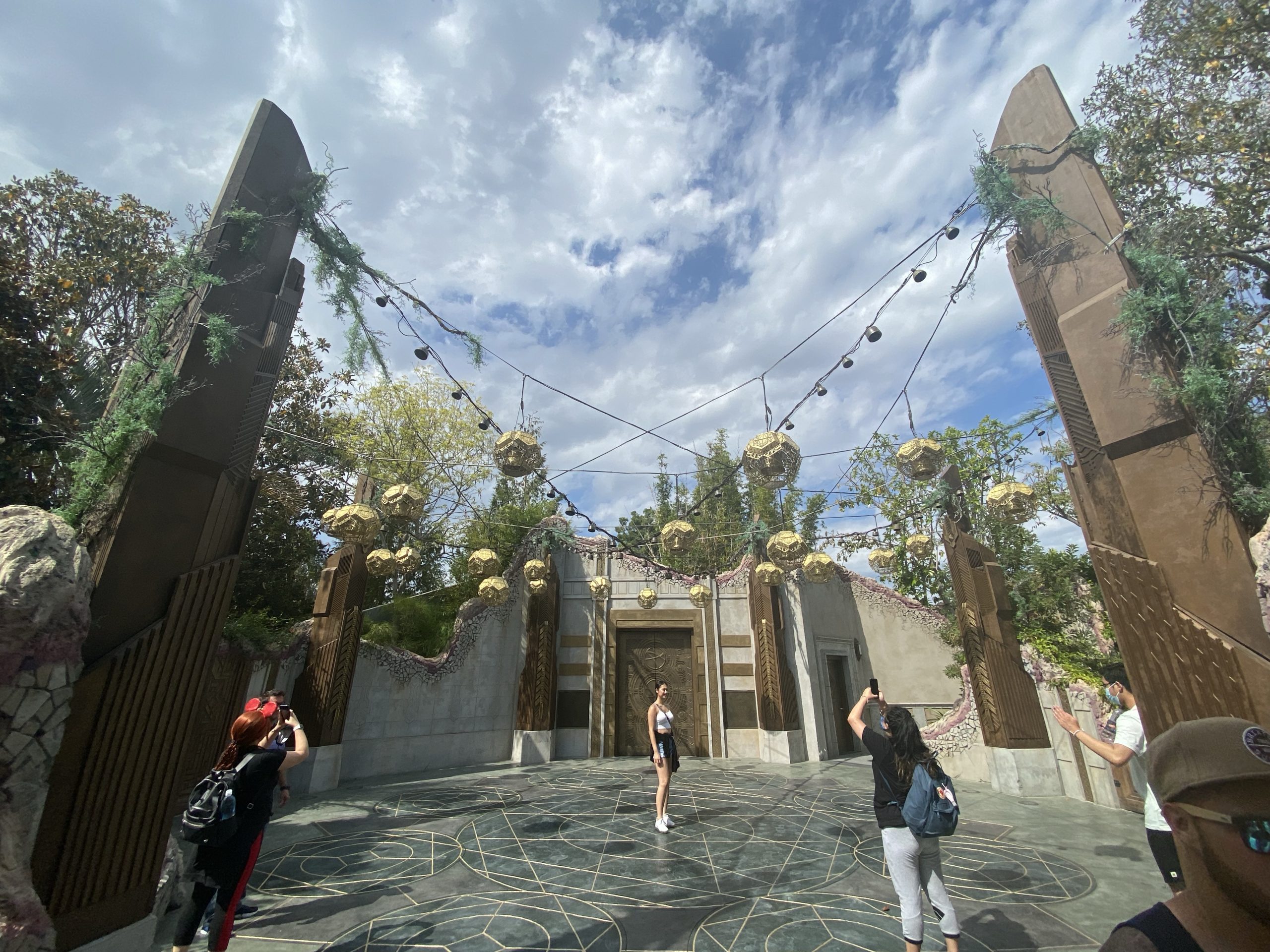 That lively atmosphere continues even without scheduled stage shows. It’s rare that some character isn’t out in front of the Avengers building or waving at guests from its second level. And yes, that may mean seeing two different Captain Americas appearing, or Tony Stark’s Iron Man — all explained away by saying this in an alternate timeline from the rest of the MCU. No “Snap” from Thanos or “Avengers: Endgame” heroic death for Tony here. 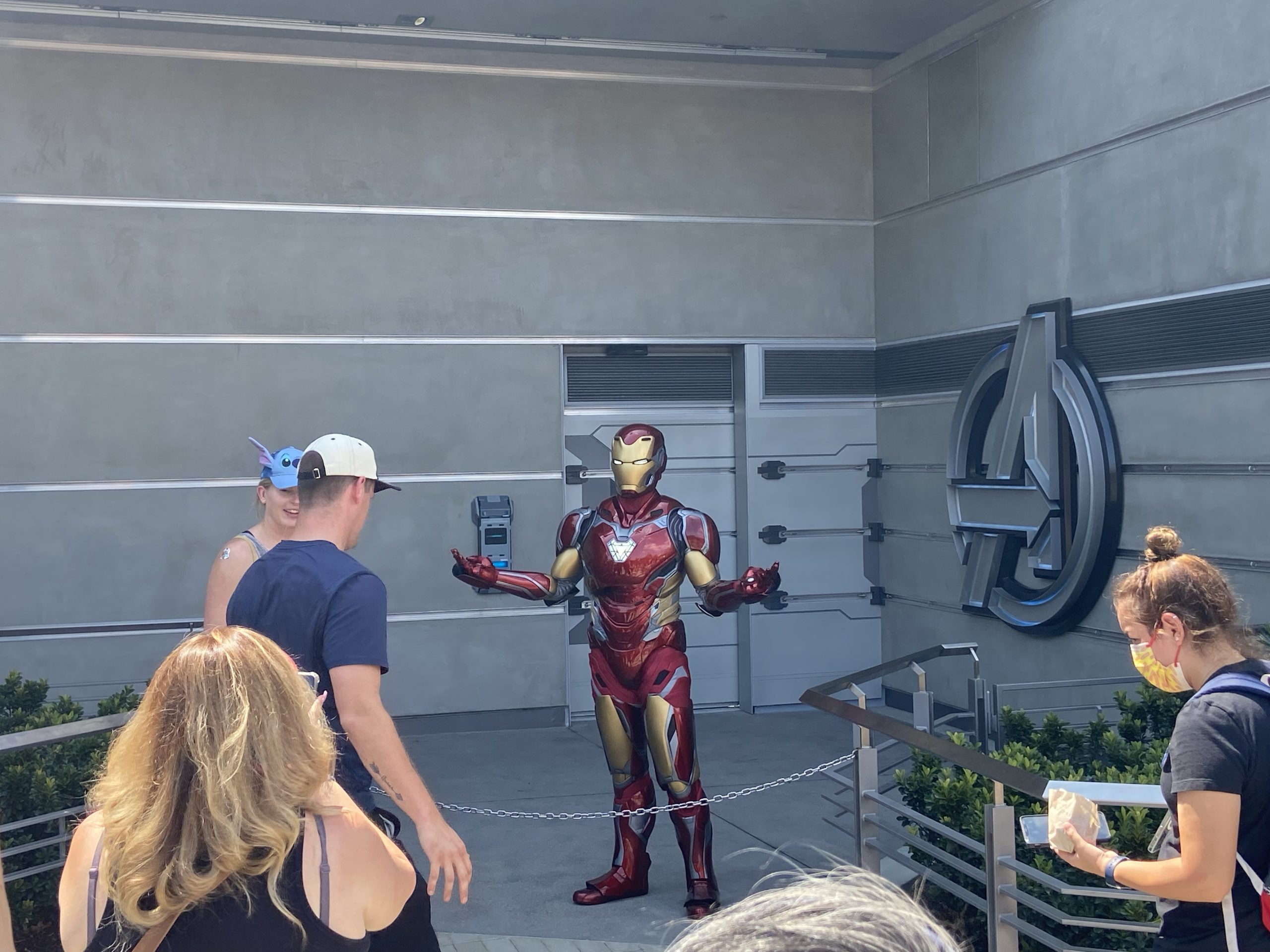 “Star Wars” fans are an infamously fickle bunch, but I can’t help but think Galaxy’s Edge would’ve been received more positively by adopting its own continuity-lite approach. Sure, Darth Vader and Rey aren’t supposed to exist in the same land, but if it’s fun, will fans really care in the end?

The food and merch

Not every franchise can be like “Harry Potter” in offering such can’t-miss opportunities for theme park dining. Even Galaxy’s Edge could offer the classic cantina.

Despite not being a concept ripped directly from Marvel movies, the Pym Test Kitchen is a winner for offering enjoyable dishes in a way you can’t expect to find outside of Disney. The restaurant features plenty of decor and menu items centered around the shrinking/expanding dynamic of Ant-Man’s powers. You don’t even need to be a Marvel fan to enjoy the concept, and that’s why this works so well. 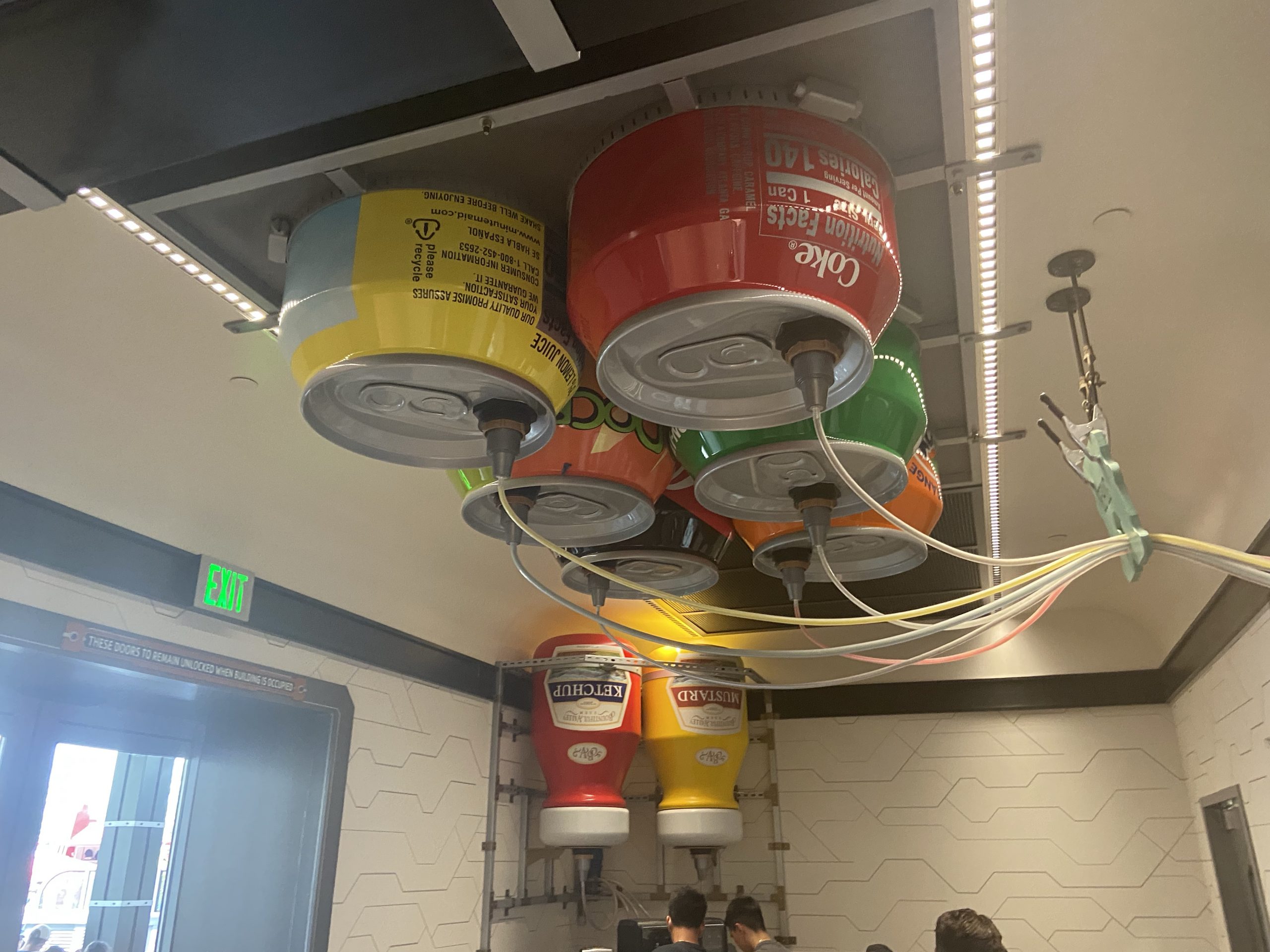 I ate at Pym Test Kitchen twice during my time in Avengers Campus. My choice for breakfast was the Ever-expanding Cinna-Pym toast. It tasted like good quality French toast, just with a bit of blue food coloring, but I can’t complain about the hefty portion size. 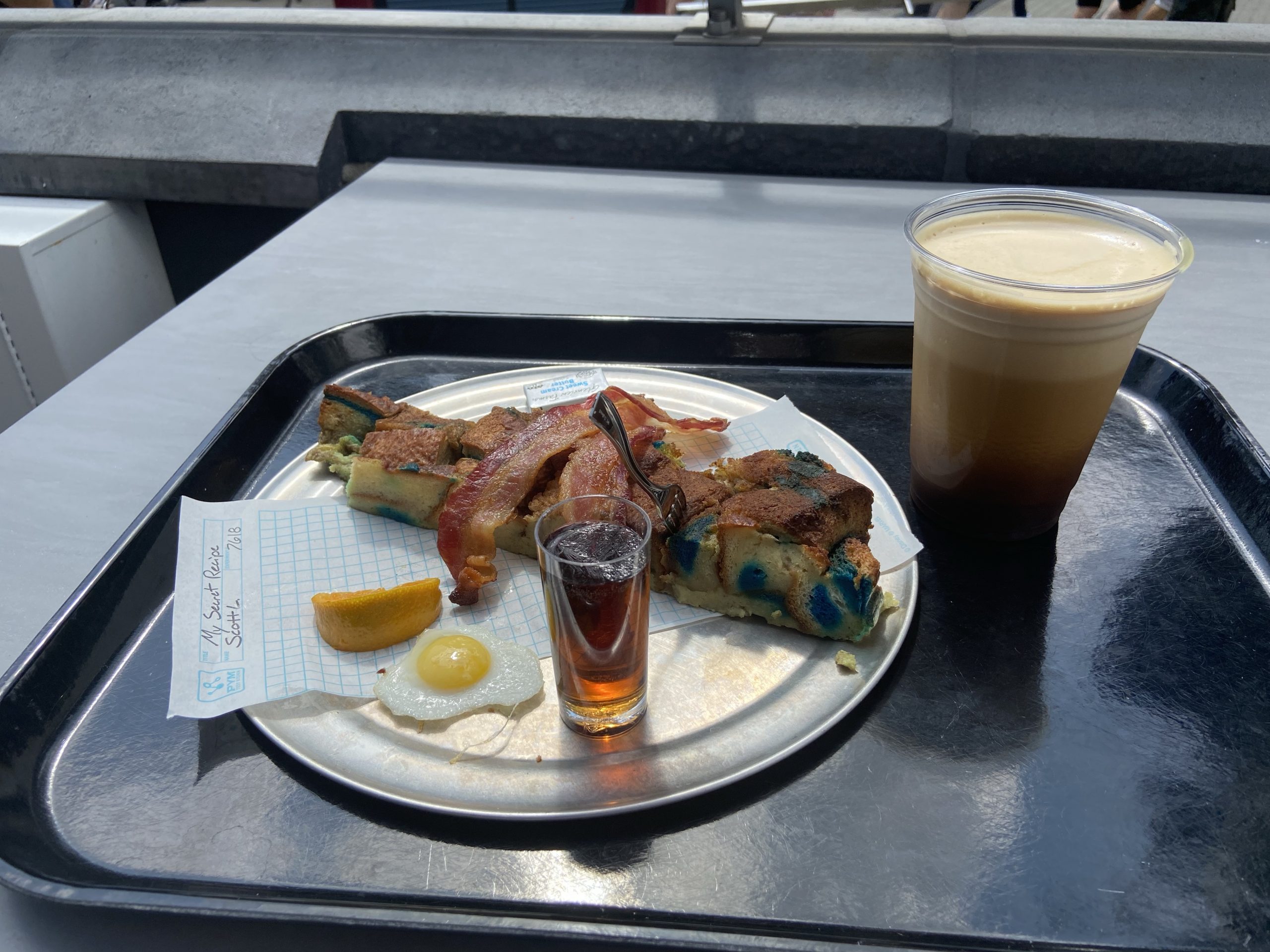 For lunch, I opted for the oversized Quantum pretzel, served with a delightful beer cheese sauce. The Proton PB&J Punch didn’t exactly match with my entree, but it was an interesting treat of its own by bringing peanut butter and jelly flavors into a whipped cream and lemonade-infused punch.

The real star, however, were the “potato bites” (don’t let Disney hear you call them tater tots). Perfectly crisp and seasoned with just the right amount of parmesan cheese, I would’ve gone back for seconds. 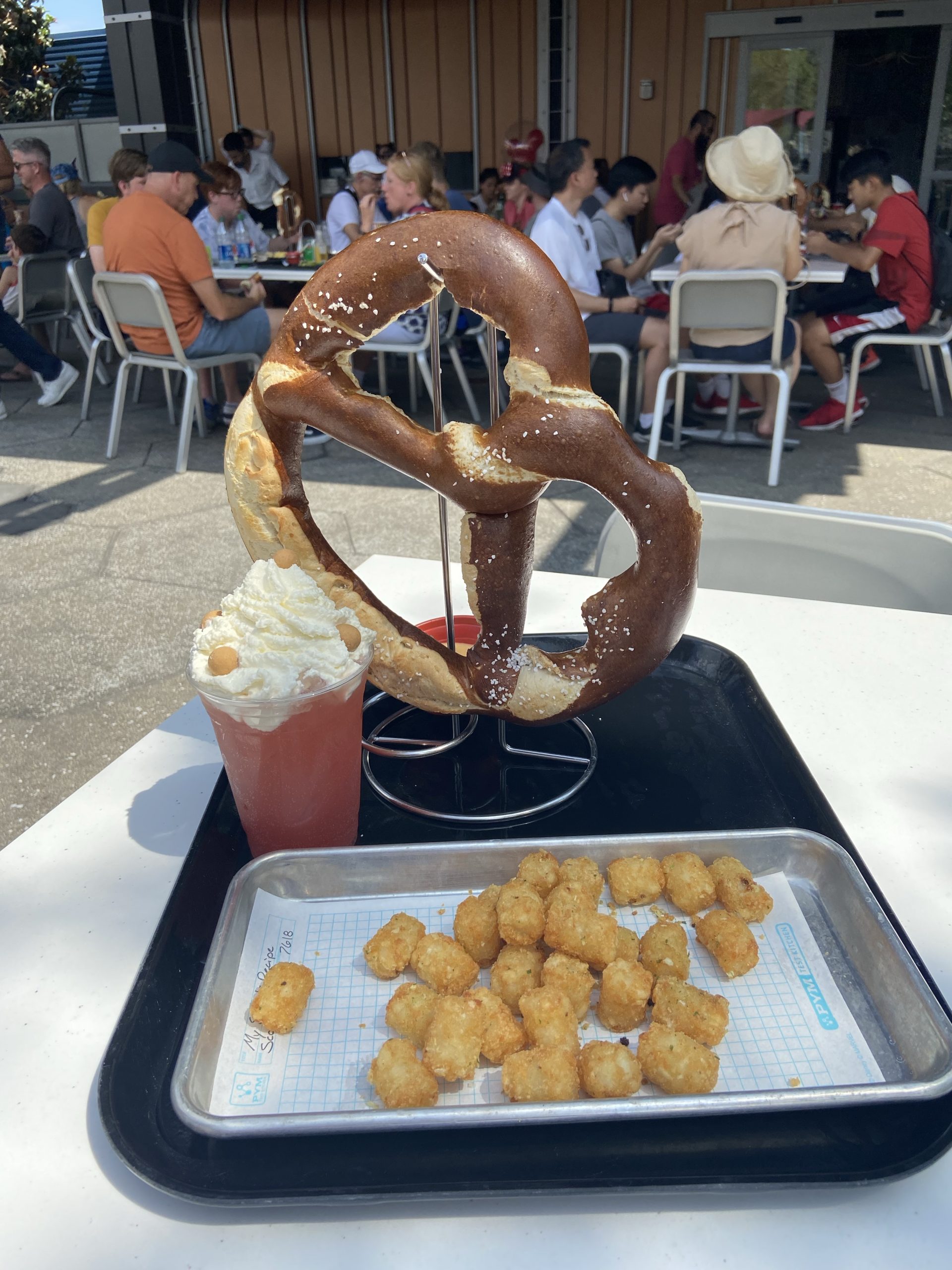 Stuffed as I was, I didn’t try either of the Shawarma Palace stands in and around Avengers Campus, and I’m not sure my unsophiscated tastes would have liked the Coconut Yogurt-Tahini Sauce. Still, I’m impressed that this one-off joke from the 2012 “Avengers” film is represented within the land. 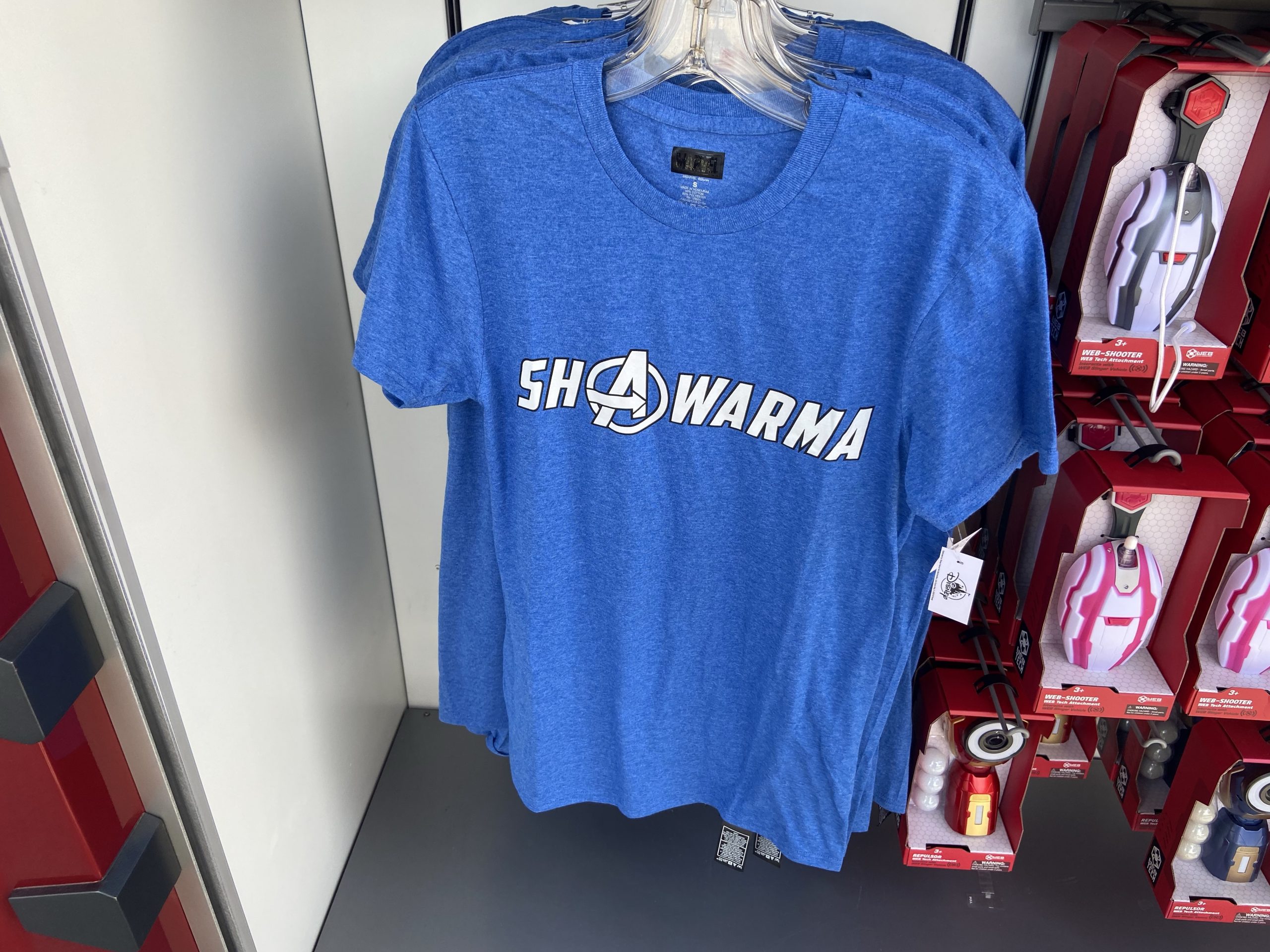 The only merch I purchased (Theme Park Tribune)

Merchandise is one area where I think the land could use improvement. While I did walk away with a Shawarma shirt, the merch lacked that distinctive “you can only get it here” feel as that offered at Wizarding World and Galaxy’s Edge. More often, it felt like Disney just stocked shelves with existing Marvel merchandise.

How to count the rides?

The final grade on Avengers Campus largely depends on how you count Guardians of the Galaxy — Mission: Breakout. Technically, this ride is part of the land and it’s one of the best thrill rides at the Disneyland Resort. It’s also four years old, so considering it as part of a new land’s rating feels a bit like starting a football game with a touchdown already on the scoreboard.

If we’re basing this review of Avengers Campus only on what’s new, then the ride category is where the land falls short. As I stated in my separate review of Web Slingers: A Spider-Man Adventure, I found the interactive attraction to be a disappointment. Galaxy’s Edge had a similar problem of opening with a single attraction that wasn’t the E-ticket headliner that a new Disney land needs. 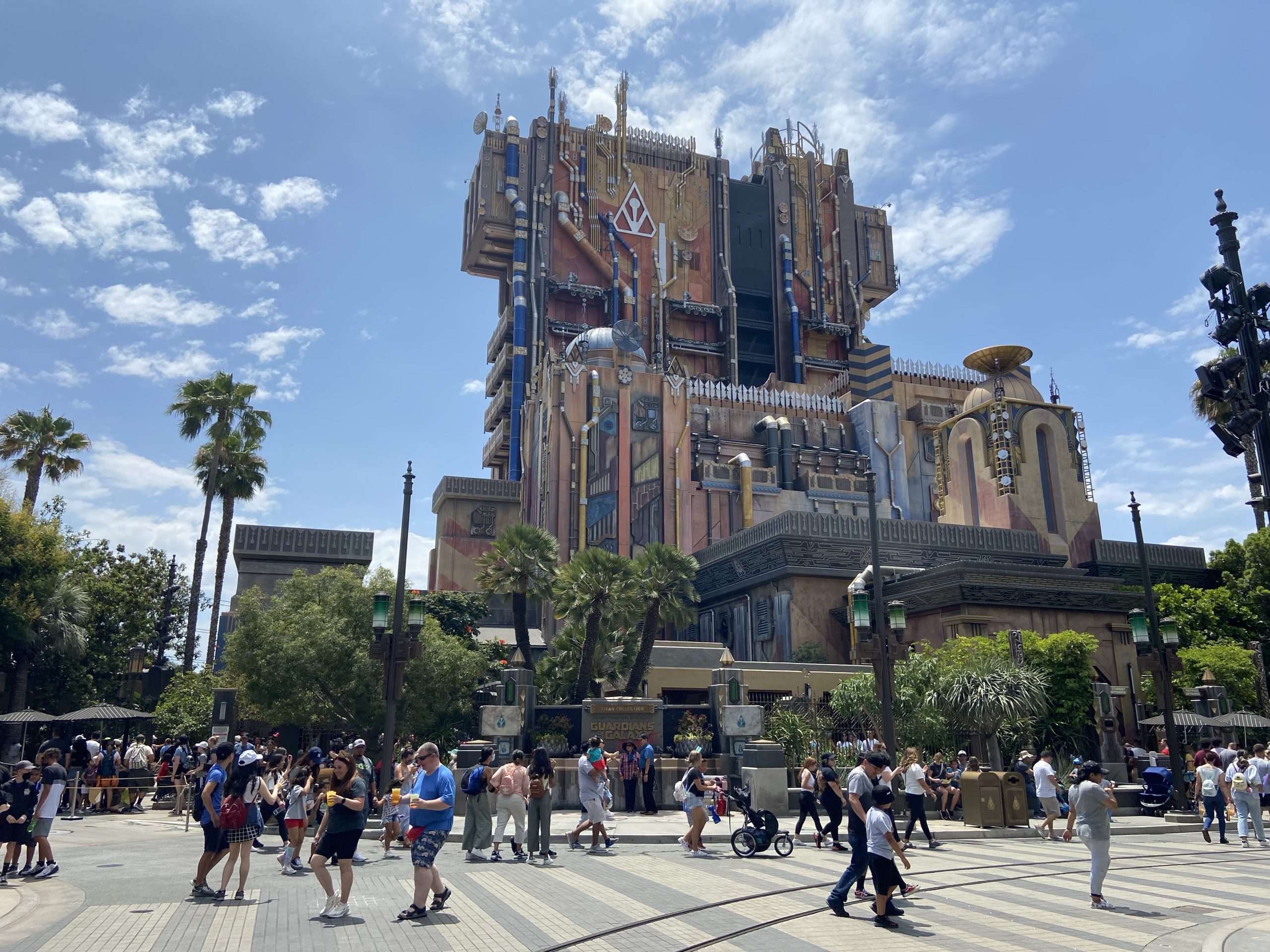 At least in that case, fans knew Star Wars: Rise of the Resistance was coming soon. Avengers Campus is supposed to get a major Avengers attraction, but that’s years away, assuming it ever happens after pandemic budget cuts.

But I’m here to assess the land as a whole, and officially, that includes the Guardians attraction. A first-time visitor to Disneyland wouldn’t know that it predated the rest of the land anyway.

Taking lessons from criticisms from Galaxy’s Edge, Avengers Campus replaces strict continuity with more characters and livens up the atmosphere. It deserves a new headlining attraction at some point, but for now, the stage shows can be considered worthwhile new attractions in their own right.

DISCLOSURE: This review is based on my own opinion and perspective. I paid for my own park tickets. Disneyland did not grant me any special access to Avengers Campus to conduct this review.