Walt Disney World is not tailored to diehard roller coaster fans, but its coasters tend to be among most expensive, most popular and most well-known attractions in any theme park.

Nine roller coasters have existed at Disney World in its half century of existence, including one that has been demolished. That’s a few more than the Disneyland Resort (see our rankings here) and the same as its local rival Universal Orlando (rankings here).

Here’s my take on how all those coasters stack up against each other: 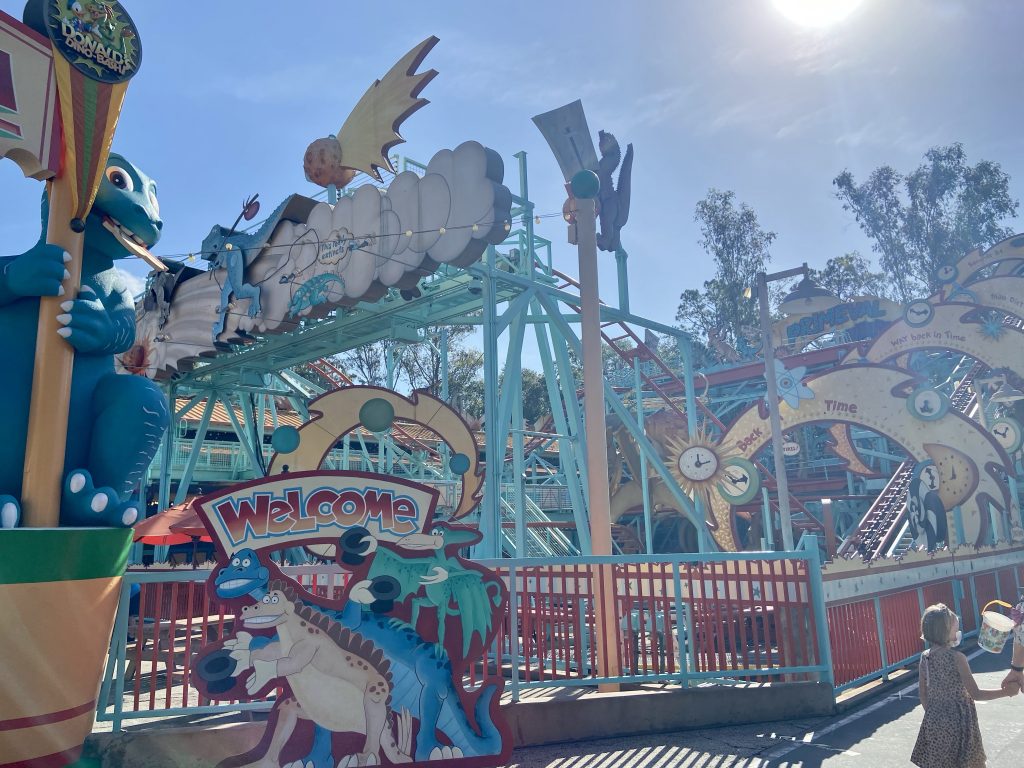 Primeval Whirl before it was demolished (Theme Park Tribune)

Gone and best forgotten, Primeval Whirl was a spinning Wild Mouse coaster quickly added to Animal Kingdom as part of the Chester and Hester’s Dino-Rama expansion of DinoLand U.S.A. I can’t deny that the park needed more rides in the early years, but a minimally-themed attraction offering more headaches than thrills was hardly the answer. Like the Disneyland Resort’s own low-effort Wild Mouse, Primeval Whirl was the kind of cheap carnival ride that has no place in a park this expensive. 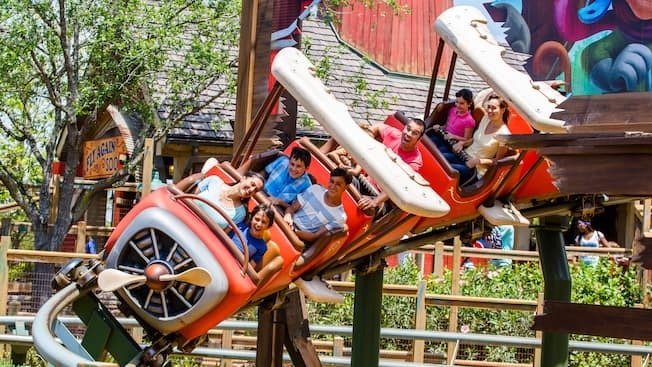 It’s the shortest coaster at Disney World by far at 794 feet and the closest that the resort has to an off-the-shelf coaster you’d find at many regional amusement parks. The scenery creating near-miss elements (at least by kiddie coaster standards) elevates this slightly above typical Six Flags offerings. That said, it more than serves its purpose as a child’s first coaster. 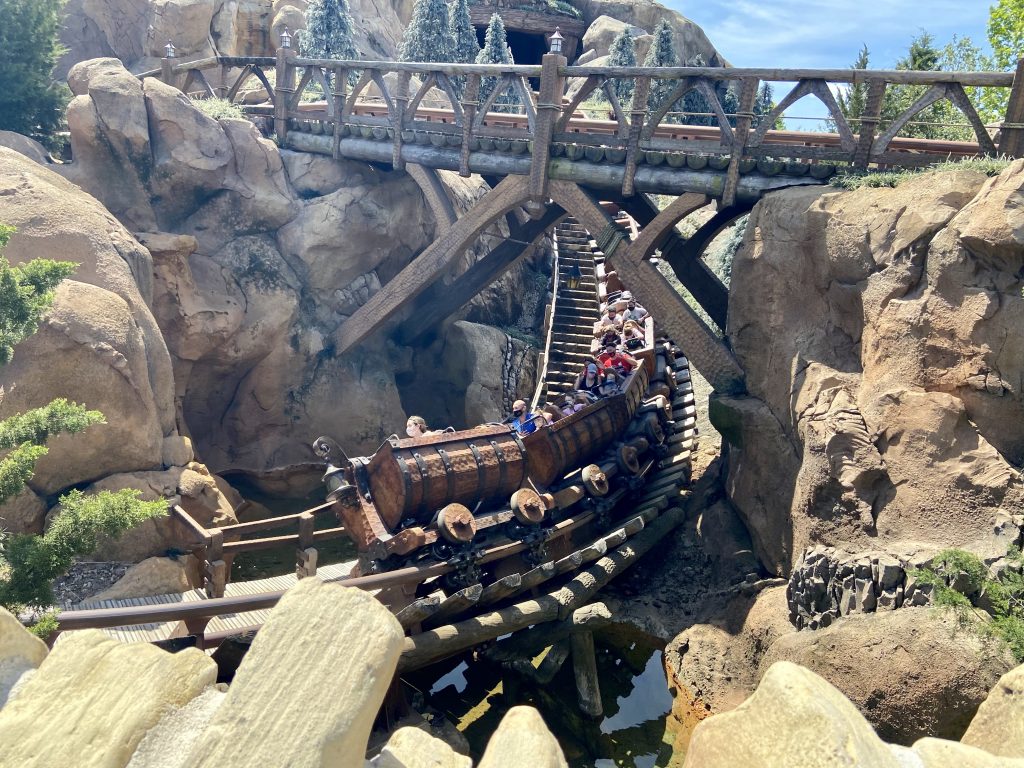 It may consistently draw the longest waits in the world’s most highly-attended theme park, but that doesn’t mean Seven Dwarfs Mine Train is any good.

Jammed into a small footprint, this ride is essentially a kiddie version of Big Thunder with a small dark ride segment, and it’s not a good sign that the non-coaster aspects are its best feature. Big Thunder isn’t that extreme to begin with, so having another stepping stone between that and Barnstormer seems unnecessary.

Gently swaying cars provide some variation, but otherwise SDMT is filled with very mild turns and mild drops — which are especially underwhelming after you waited so long for this experience.

Being a late addition to 2012-2014 Fantasyland re-do, its position as the most sought-after ride in Magic Kingdom seems like an unfortunate accident. Luckily, Tron Lightcycle Power Run should assume that throne soon and knock SMDT to a spot fitting of its quality. 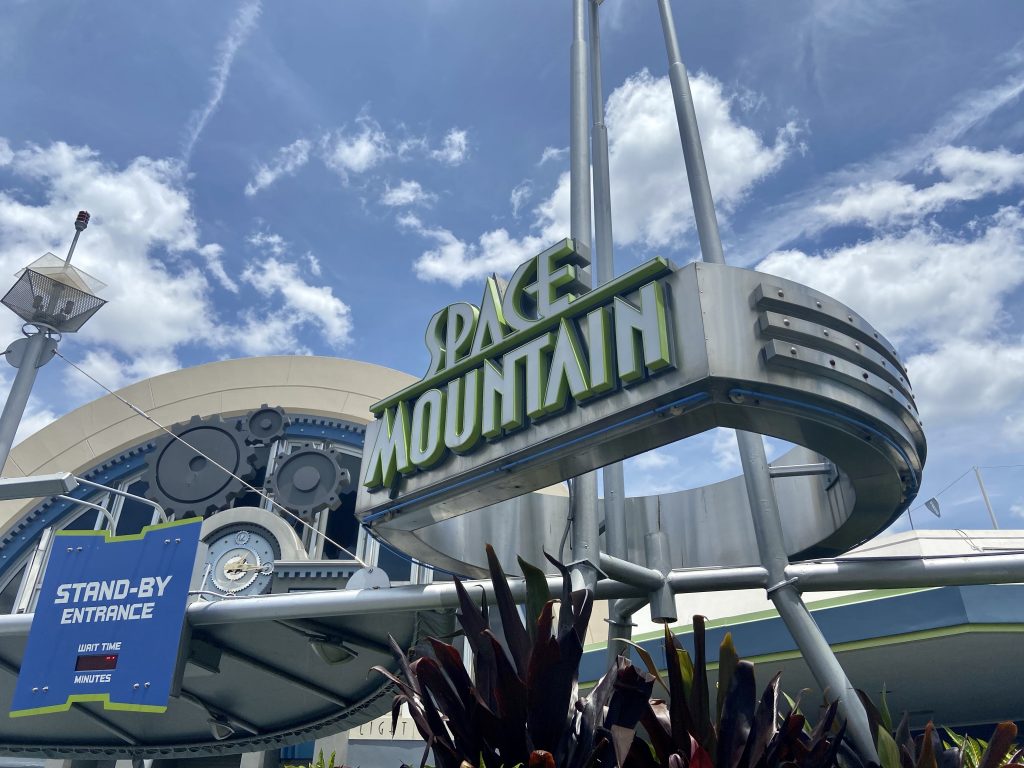 The oldest coaster in Walt Disney World is showing its age as it nears its 50th birthday. Roughness is not a word typically applied to Disney coasters, but Space Mountain is an exception.

Sporting two nearly-identical tracks and smaller trains than its one-tracked Disneyland sibling, Space Mountain provides much greater thrills than its stats would suggest. Its top speed is only 27 miles per hour (only 2 mph above Barnstormer) and its biggest drop is only 21 feet. Flying around in the dark, however, makes you feel like you’re going faster and surprises you even with small, gradual drops.

All those small drops and mid-course brakes also make for a somewhat jerky ride that can feel uncomfortable to even some seasoned coaster enthusiasts. It doesn’t help that, unlike Disneyland’s Space Mountain, the Disney World version has never received a complete replacement of its track. Even with a few rough edges, I can’t deny how fun it is to feel like you’re zooming around the stars with no clue where the next turn or drop may be. 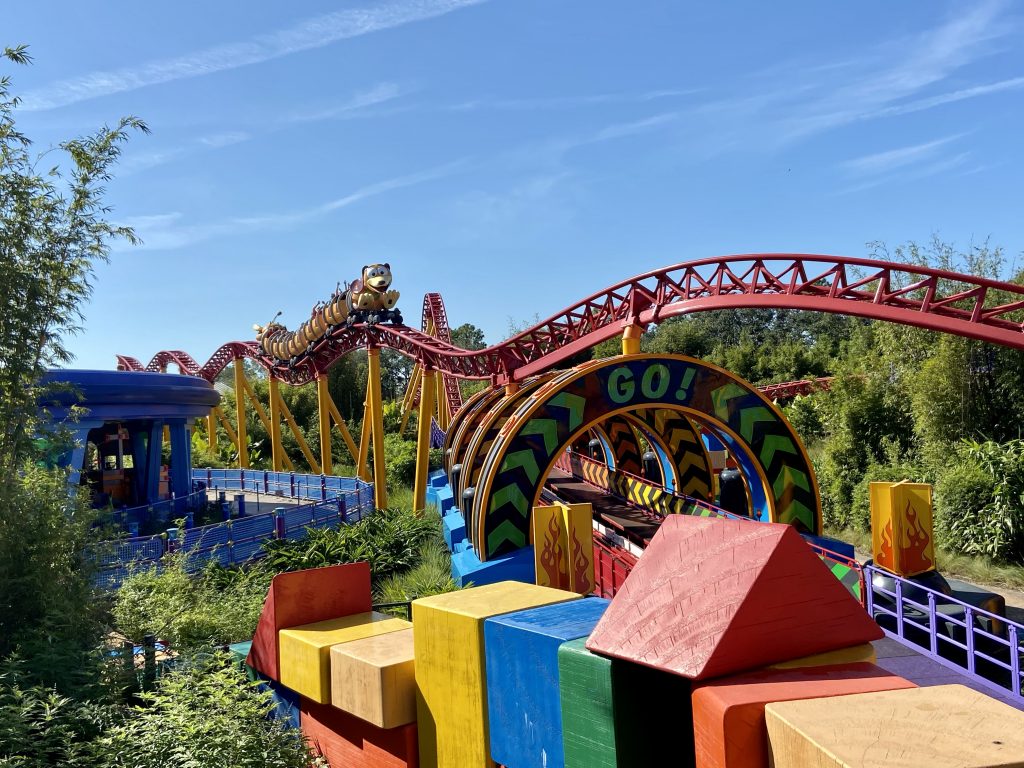 If you strip out the “Toy Story” theming and charm, this mild launch coaster would be a middle tier attraction at a regional amusement park. At Disney’s Hollywood Studios, it’s one of the headliners, and like Seven Dwarfs Mine Train, I don’t think it’s quite suited to the task.

Slinky Dog Dash is not a bad ride by any stretch. Everything from the queue to the coaster trains to the Hot Wheels-style second launch wonderfully sells the Toy Story Land aesthetic of being a toy in Andy’s backyard. But it’s also a rather safe, unimaginative ride design that falls short of other themed Disney coasters on this list that are decades older. 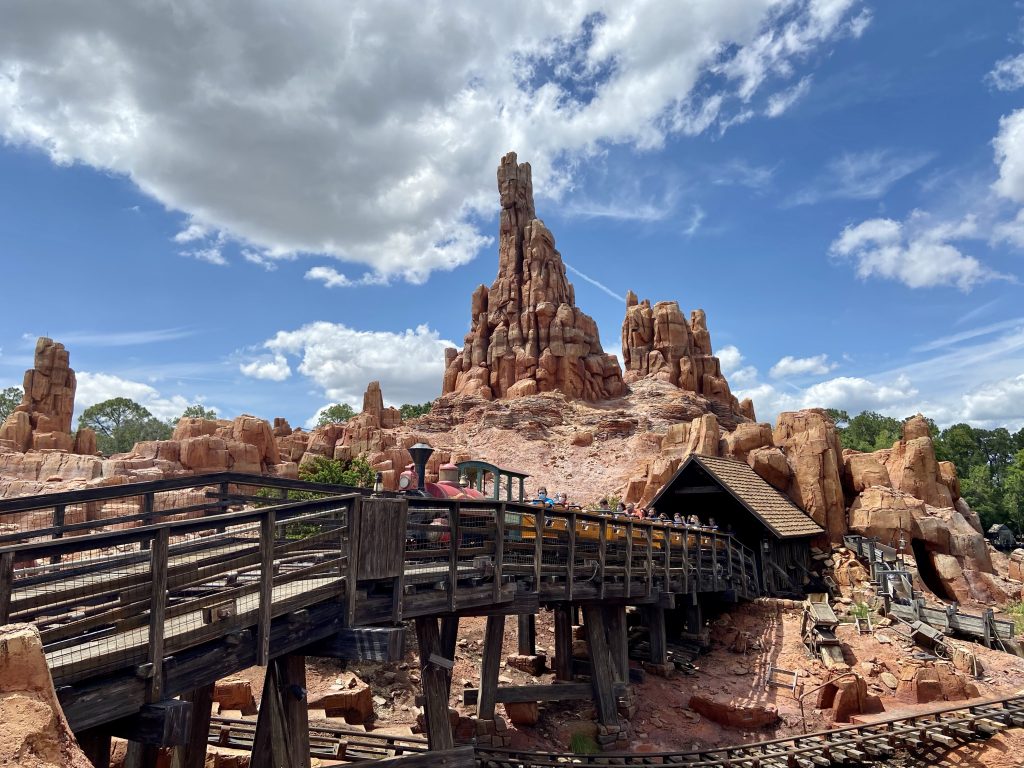 What Space Mountain achieves with darkness, Big Thunder achieves with theming, greatly enhancing what, by all statistical measures, is a mild roller coaster.

Topping out at only 36 miles per hour, Big Thunder has survived as one of Disney World’s thrill rides by making its twists and turns feel natural and real. That’s thanks to the scenery and the minimal use of visible supports. Perhaps the runaway mine train style on display here worked too well, in a way, since Disney kept creating different versions of it with Expedition Everest and SDMT.

I ranked the Disneyland version of Big Thunder as that resort’s best coaster. The very similar ride at the Magic Kingdom ranks lower only because Disney World has a stronger overall lineup — though adding the projection effects to the Florida ride’s final lift hill wouldn’t hurt its standing. 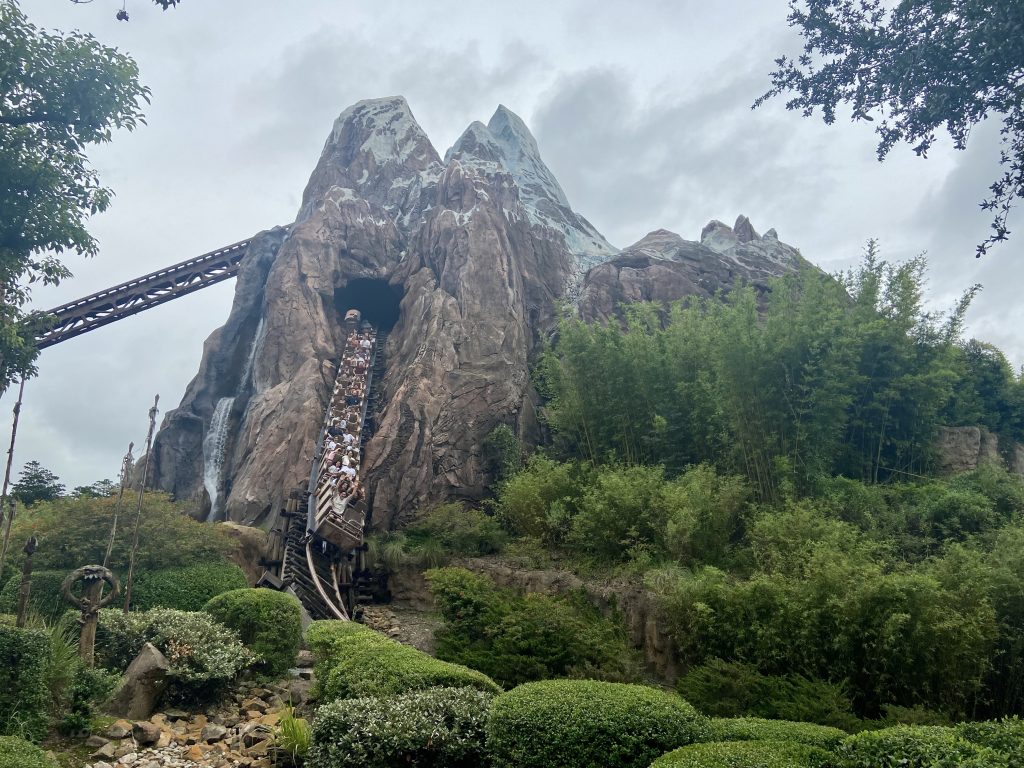 Perhaps the final evolution for Disney’s mountain-themed thrill rides, Expedition Everest is yet another mine train coaster, only done bigger.

With a top speed of 50 miles per hour and a drop of 80 feet, Everest offers more airtime and lateral forces than the more family-oriented entries preceding it on this list. Adding to the thrill is when you come around a turn only to be met with a dead end — at which point the track switches behind you and you go hurtling backwards into the depths of the Yeti’s lair.

So why is this ranked third? The famously broken Yeti animatronic is part of it. While I understand it’s impossible to fix this issue without expensive repairs and closing the ride for years, the fact remains: one of the attraction’s biggest selling points has been broken and replaced with a strobe light since 2006. That’s not going to beat Cosmic Rewind on a storytelling and technological basis. (You can see video of the animatronic working as intended here and here.)

Judging it as a coaster, it may be a more intense Big Thunder, but it’s still treading ground too similar to previous Disney rides. The final two on this list provide experiences more distinct among the Disney coaster lineup. 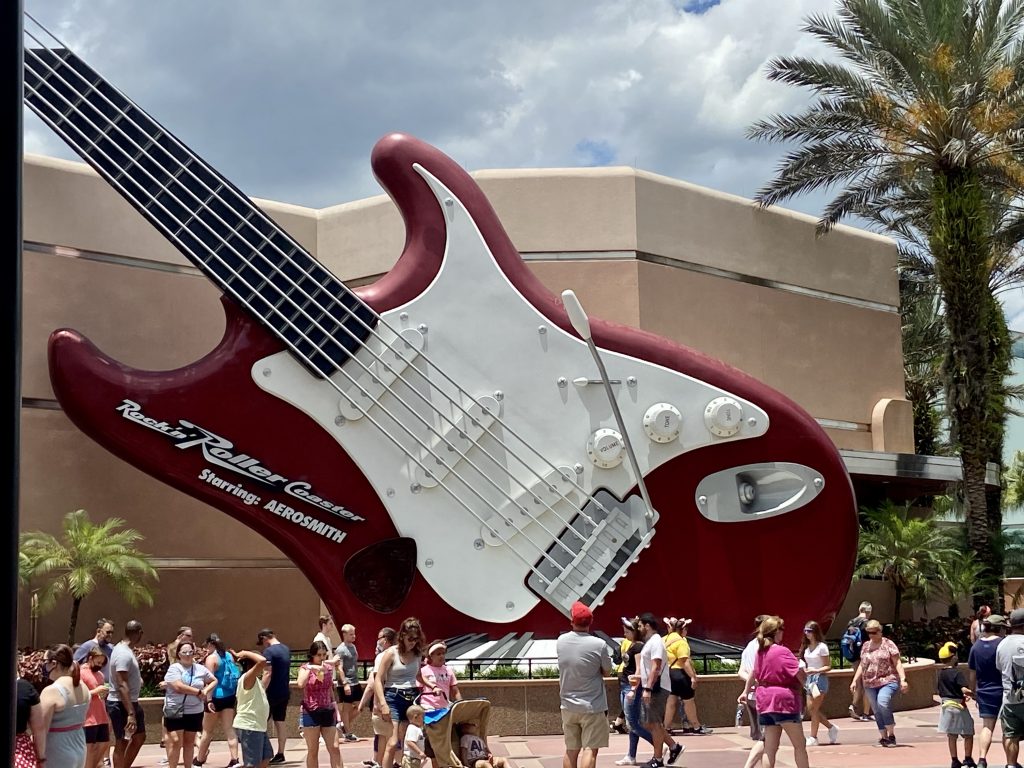 Arguably the most straightforward of Disney World’s roller coasters, Rock ‘n’ Roller Coaster is also the most reliant on thrills.

The opening launch of 57 miles per hour takes you through three inversions (being the only Disney World coaster to go upside down) mostly in darkness, all accompanied by a rotating set of Aerosmith anthems provided by onboard audio. This would easily fit into any coaster-centric Six Flags or Cedar Fair park.

However, for seasoned coaster enthusiasts, it won’t provide the same level of thrills as top-tier coasters from some regional parks, and its once-innovative LSM launch is far from novel these days. For the Disney faithful, there’s not much in the way of storytelling beyond zipping past some road signs in the dark.

In contrast, the No.1 coaster does better in satisfying both thrillseekers and the typical Disney guest. 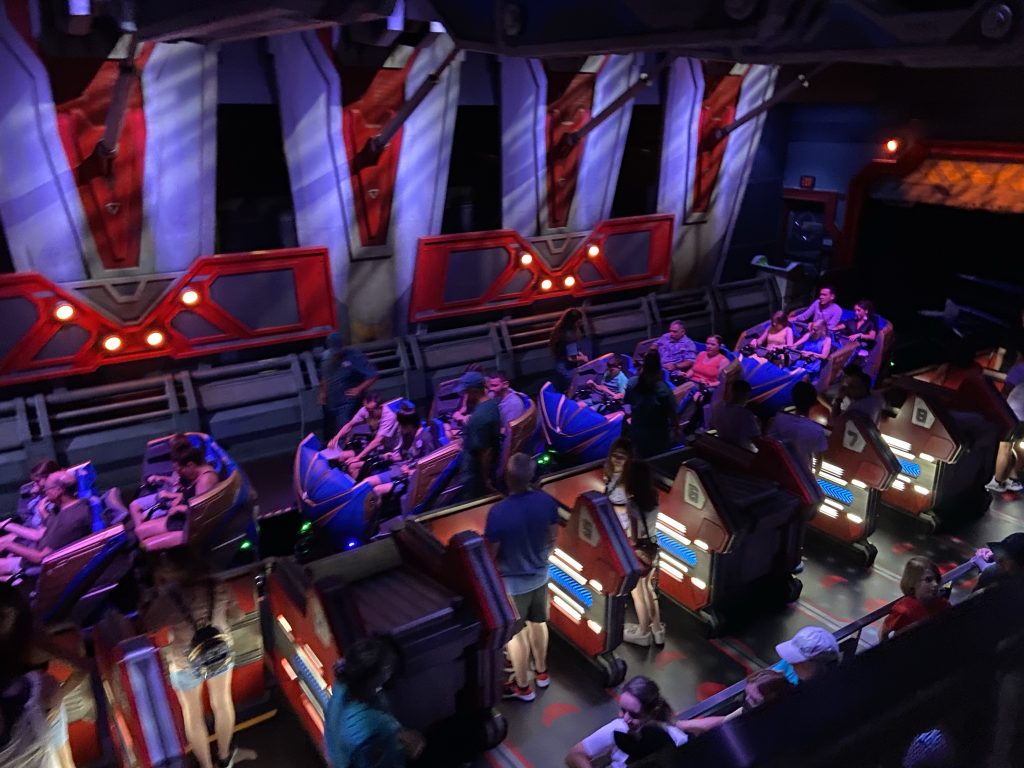 You can read our full Cosmic Rewind review here.

Disney World’s newest coaster is, in my humble opinion, far and away its best. That’s because the ride provides the best balance on this list between true coaster thrills and technologically-advanced storytelling.

The backwards launch sends you careening through 5,577 feet of track filled with swooping turns and drops with genuine airtime, all enhanced by the controlled spin of the Omnicoaster ride vehicles, a randomized soundtrack, massive screens and set pieces.

Don’t go in thinking you’re getting more of a dark ride than a coaster, like Universal’s Escape from Gringotts. What you’ll experience is like a 2020s version of Space Mountain.

DISCLOSURE: These rankings are based on my own opinion and perspective. While I did ride Slinky Dog Dash for the first time as part of a 2018 media preview for Toy Story Land, I have experienced all of these attractions while paying for my own park tickets and without any privileged access provided by Disney.