Universal has always depended more on thrills than its rival Disney, and the stellar coaster lineup at Universal Orlando reflects that philosophy.

But this isn’t a Cedar Fair or Six Flags lineup, either. The coaster collection at Universal Studios Florida and Islands of Adventure includes high-tech rides that meld dark ride elements with coasters, abundant use of on-board audio, and rides that satisfy the most hardcore coaster enthusiasts and the casual theme park fan alike.

Here are the Theme Park Tribune rankings of all the coasters at the Universal Orlando Resort: 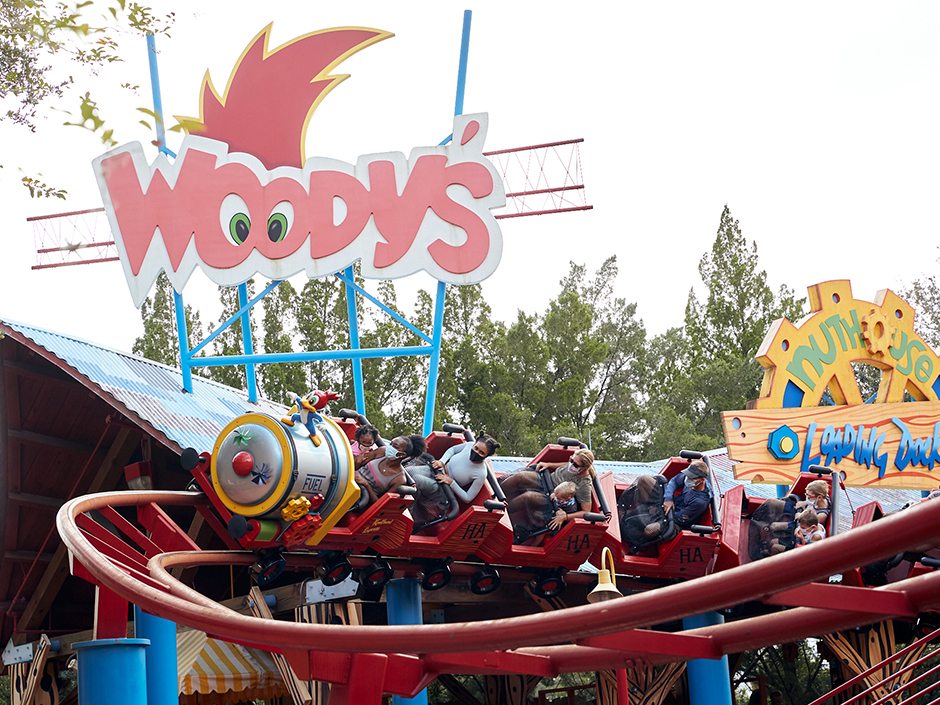 Despite being at the bottom of this list, there’s nothing necessarily wrong with Woody Woodpecker’s Nuthouse Coaster. But there’s only so much you can do with a 28-foot-tall, 679-foot-long coaster. It serves the mundane purpose of being a first coaster for kids at Universal Orlando, much like Disney World’s own Vekoma Junior coaster Barnstormer, but the latter ride lasts an extra 15 minutes and is at least long enough to support two trains.

Still, it’s an inoffensive kiddie coaster with a practical purpose. For everyone who’s not a small child, it’s just there to pad your coaster count.

You forgot about this ride, didn’t you? Well unless you have children (or actually are a child), that’s understandable. Pteranodon Flyers is a suspended coaster where ridership is limited to children between 36 and 56 inches in height, with adults taller than that having to be accompanied by a child.

That makes it a hard-to-obtain credit for coaster enthusiasts. If you happen to have a child who fits the criteria (we at Theme Park Tribune do not endorse borrowing kids for coaster credits!), what you’ll get is a long wait, thanks to the ride’s painfully low 170 riders per hour capacity, just to be dangled over Jurassic Park for less than minute. That scenery means it beats out Woody Woodpecker, but that’s not saying much.

Did you watch the POV above? Then you really don’t need to ride this. 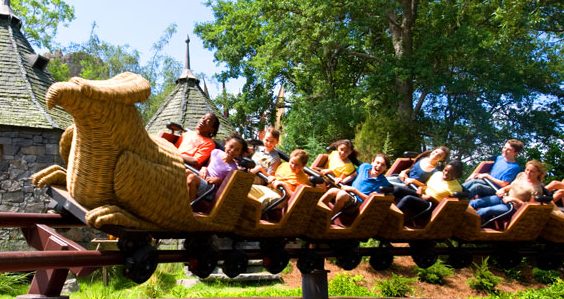 Flight of the Hippogriff (Universal)

7. Flight of the Hippogriff

This Islands of Adventure coaster provides a small step up in intensity for kids who have conquered Nuthouse Coaster. Another Vekoma Junior model, this coaster sports another 420 feet of track, squeezing out another 20 seconds of ride time compared to the Nuthouse Coaster, but only goes seven miles per hour faster (28 mph here vs. 21 mph). Like its Vekoma sibling, it sticks to some gentle turns and drops that even the most sensitive stomachs can bear.

The “Harry Potter” theming, however, makes it a little more than a one-and-done, with the excellent Buckbeak animatronic greeting guests as they ascend the lift hill. 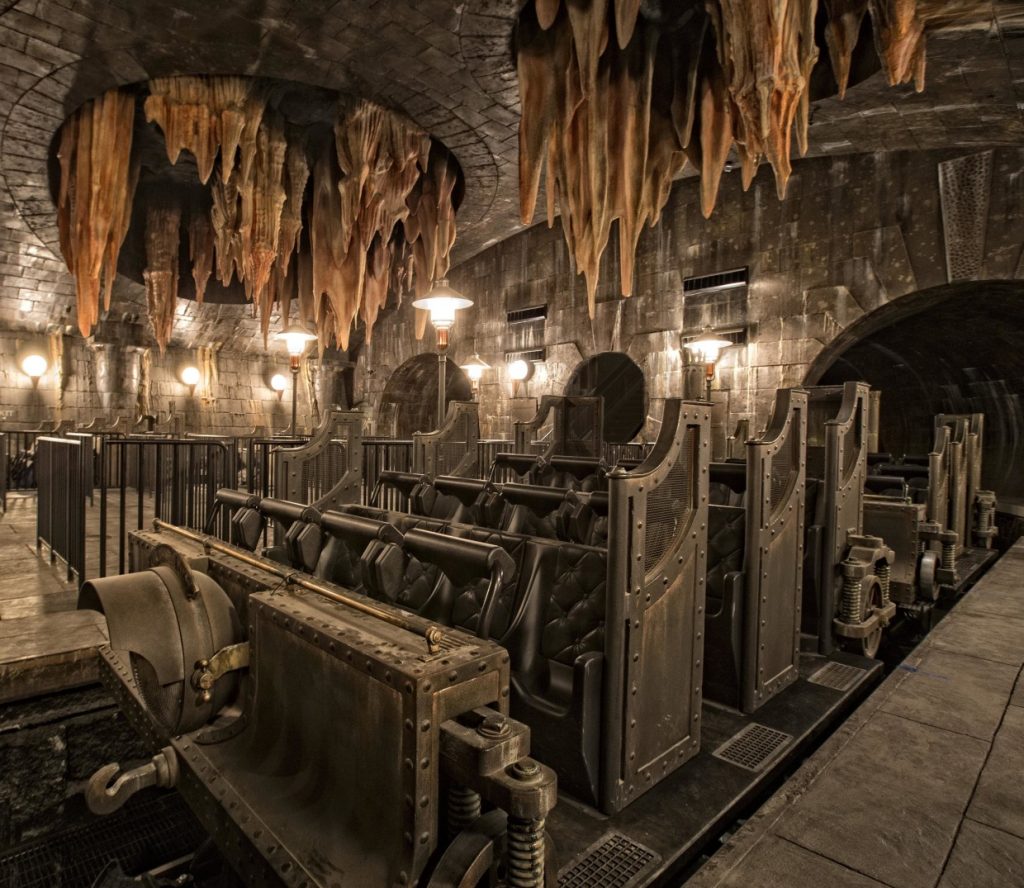 6. Harry Potter and the Escape from Gringotts

Placing the star attraction of Diagon Alley at No. 6 on this list is more about its lack of coaster elements than a reflection of its overall quality.

Escape from Gringotts qualifies as a coaster with the tilting track, drop and turn at the beginning of the experience, but acts more like a dark ride. After that first drop, it’s like Amazing Adventures of Spider-Man on a coaster train, moving between screens as riders explore an alternate version of the Gringotts Bank sequence from “Harry Potter and the Deathly Hallows.”

The effects are still impactful, such as when a troll appears to fling your car from one screen to another, but this Universal ride formula was wearing thin even at the time the attraction opened in 2014. For coaster enthusiasts, the jerky movements between screens aren’t enough to beat the thrills on simpler attractions. 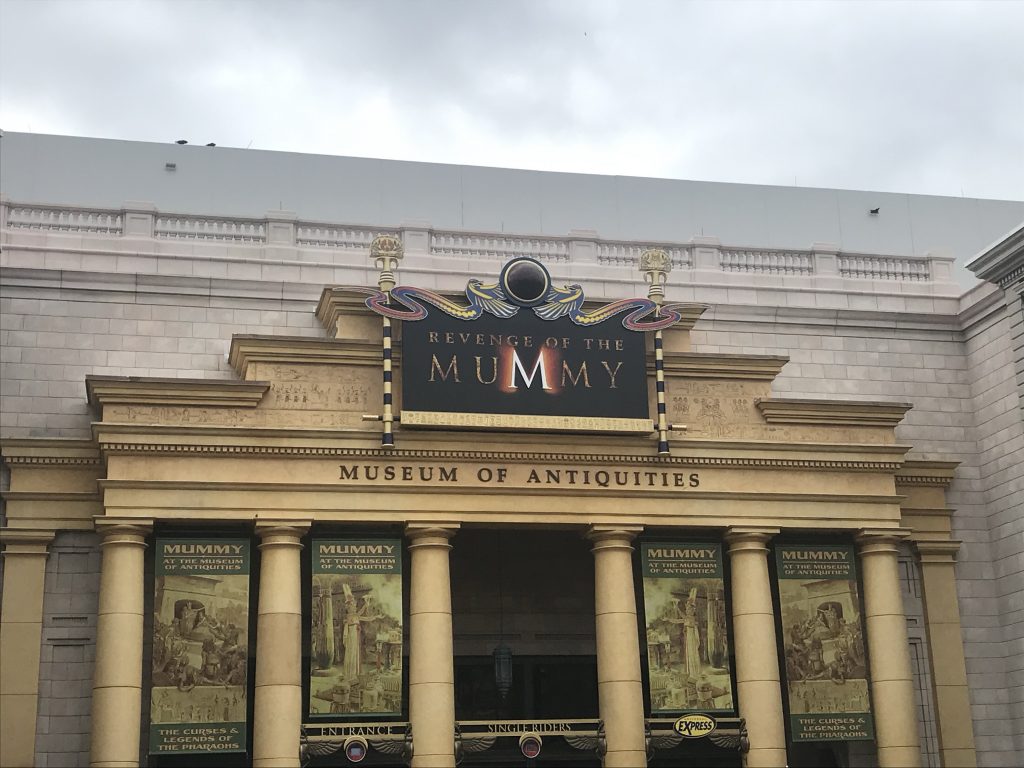 5. Revenge of the Mummy

Universal did better on its first attempt at a storytelling coaster than its second. Revenge of the Mummy has less of a stop/start feel and blends its coaster and dark ride elements together much better. It helps that it really acts like a coaster in parts, such as the launch through Imhotep and the drops and turns past projections and steam effects that feel like an upgraded, scarier Space Mountain.

If the coaster elements went on just a little bit longer, Revenge of the Mummy may be higher on this list. As great as these elements can be — the false stop with the ceiling being set ablaze will never get old — this list is about the best coasters, not simply the best rides, and there’s too little of a coaster to place it above the next two entries on this list, even if it’s arguably a more complete experience.

That said, it remains one of the finest examples of a coaster with a real storyline, even as it approaches its 20th birthday. 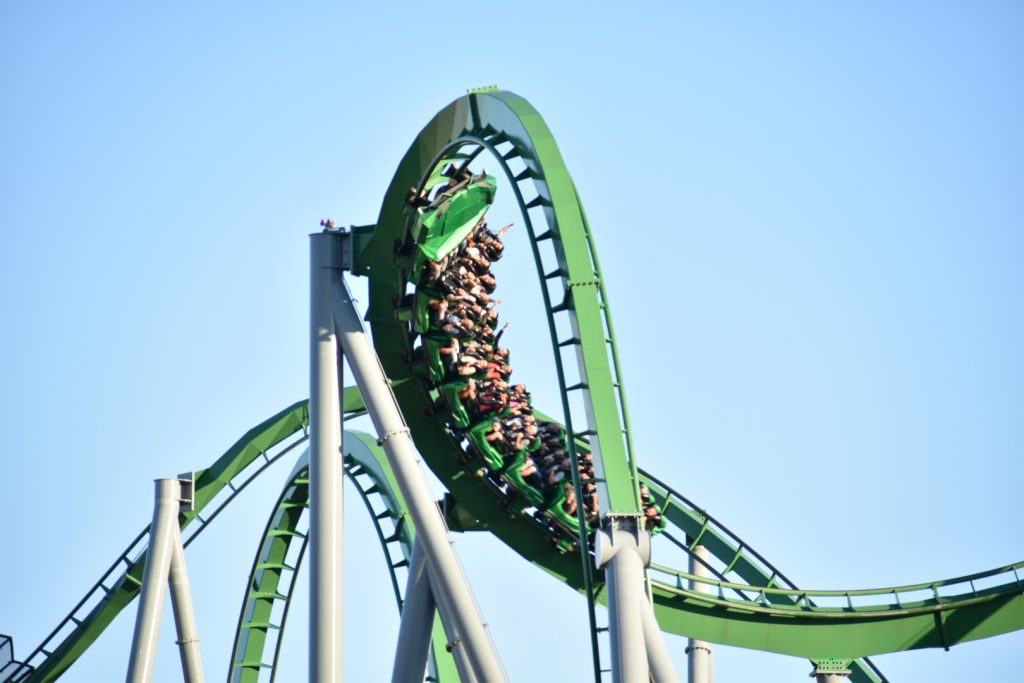 While Hulk is the closest Universal gets to a coaster that could easily fit into a Six Flags park, it makes up for any scenery and theming shortcomings with intensity. With its seven inversions, including a zero-g roll straight of the tunnel, this is not a ride you want to challenge after a full meal. The on-board soundtrack from Patrick Stump of Fall Out Boy was a welcome addition in its 2015 refurbishment, at least when the on-board audio is functioning properly.

So why is it only at No. 4? Roughness is the first reason. Despite having most of its track replaced in 2015, Hulk is the roughest coaster at Universal Orlando, with the bulky over-the-shoulder restraints not exactly offering a cushy surface for my head as its banged back and forth.

The second is the launch. While surely impressive in 1999, Hulk’s 40 miles per hour launch pales in comparison to newer launches found all across the country — including the nearby VelociCoaster. 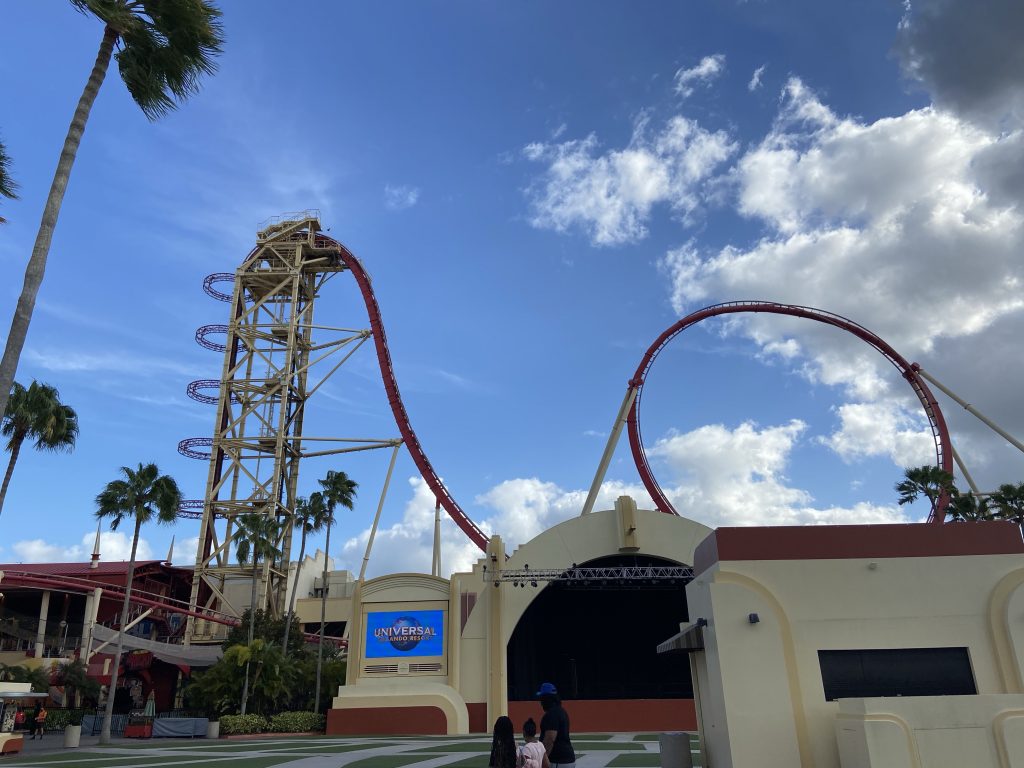 I’m going to cause some controversy by placing this above Hulk. Coaster enthusiasts gripe about the multiple brake runs on Rip Ride Rockit, but that ignores just how great the elements are between those brakes (and what little impact they have when the ride is functioning correctly).

Unlike Hulk, which borrows elements regularly seen on other B&M coasters, Rip Ride Rockit stands out from what you’ll find at a regional park. The first drop off the vertical lift looks deceptively mild, but it gives me sustained ejector airtime, especially in the back row. That leads to the rarely-seen non-inverting loop, which provides serious, surprising lateral airtime.

The brake runs can be a pain if they’re actually slowing the train down, but they rarely do, allowing for more airtime off the brake run drops, mixed in with intense turns through the old Ghostbusters fire station facade and in the last section that moves towards CityWalk.

Of course, you can’t mention this ride without praising the music selection gimmick. If I’m choosing from the official playlist, I almost always pick “Sabotage” by Beastie Boys. But the hidden list (learn how to access it here) has some gems that go great with the ride’s pacing, such as “Temples of Syrinx” by Rush, “Wicker Man” by Iron Maiden and (don’t laugh) “Ride Like the Wind” by Christopher Cross.

Rip Ride Rockit can’t beat out the next two Universal coasters on this list, which offer better elements and much more theming, but I think the coaster community has misjudged its quality. 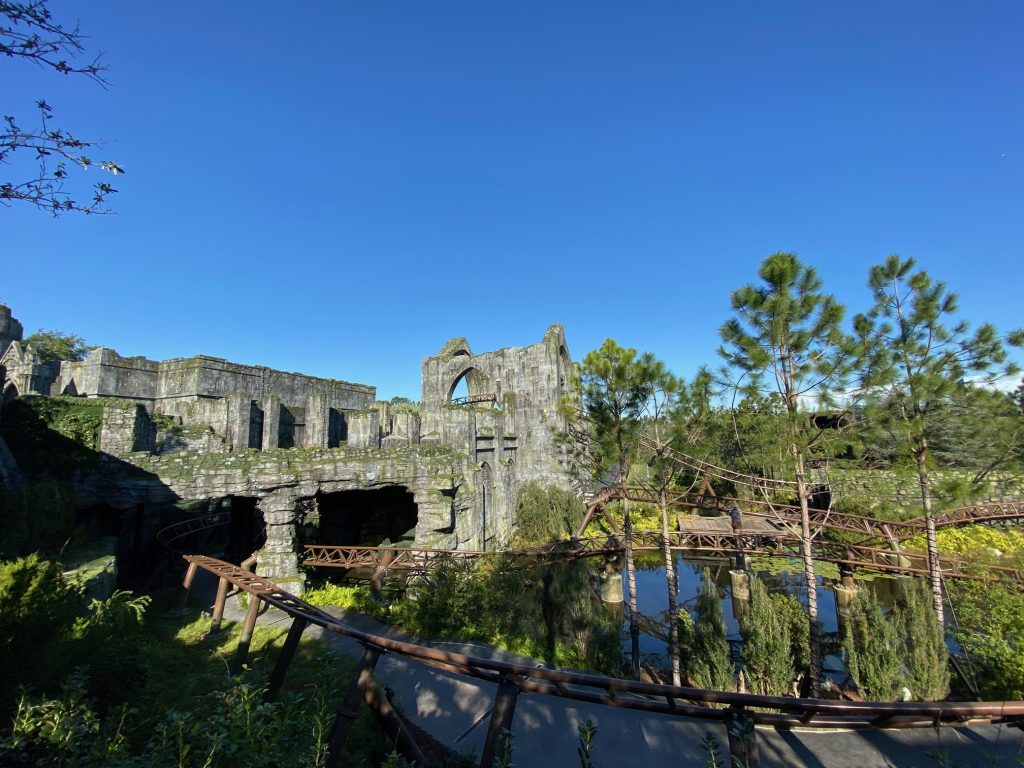 Coaster enthusiasts still mourn the loss of Dueling Dragons, but what replaced is the greatest family coaster ever built.

In fact, calling it a family coaster undersells its variety and intensity. Riders are taken through the Forbidden Forest on motorbikes, going through multiple launches, twisting turns, whizzing past multiple animatronics and through some high-tech elements that include an unexpected spike, a track switch and a a drop track that will surprise even the most jaded theme park fan. And unlike Mummy and Gringotts, it doesn’t sacrifice an iota of its coaster identity for its storytelling components.

Besides its operational difficulties, which have decreased since its brutal opening year, there’s little negative to say about Hagrid’s. It’s the kind of world class attraction that Universal should build for the most popular IP in its parks. You can still miss Dueling Dragons and love this ride. 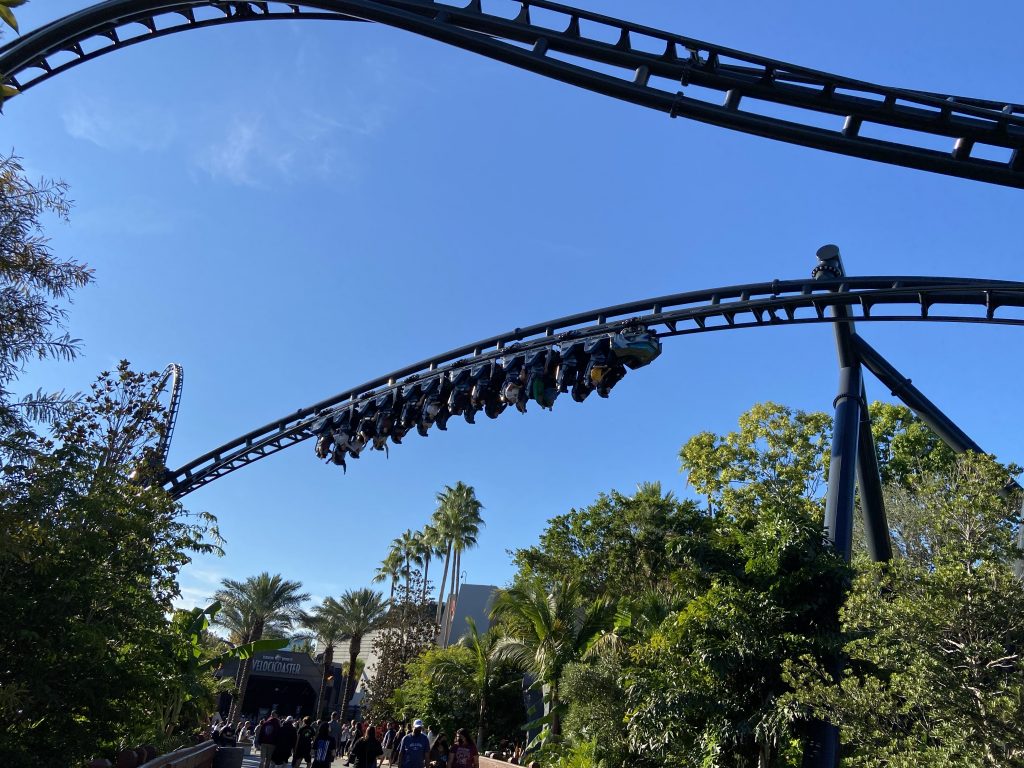 At the time I’m writing these rankings, this is my No. 1 overall coaster — so of course it’s going to take the top spot at Universal Orlando.

VelociCoaster is an absolute triumph for Universal Creative. Its highly-themed queue sets up a premise perfect for the Jurassic World universe (“Put a roller coaster in the paddock.’ What could go wrong?”). Then the ride itself is nonstop thrills: its spaghetti bowl first half, the rush of second launch over the 155-foot-tall top hat, hanging on to your lap bar over the 100-foot-long stall to being floated out of your seat one last time with the “mosasaurus roll” over the lagoon.

It’s telling when you can’t find any serious negative reviews of a coaster. VelociCoaster is seemingly beloved by everyone who rides it.

DISCLOSURE: This review is based on my own opinion and perspective. Universal Orlando has not provided any privileged access to Theme Park Tribune to experience these rides.