Content within the ever-expanding Disney World blogosphere can entertain, educate and at times enrage the parks’ fiercely dedicated fanbase.

But what that content won’t do is make you rich.

A recent post on Upwork, a platform where freelancers can find their next gig asked for “a writer that loves Disney World and is capable of writing articles about Disney World rides, attractions, and hotels” of at least 3,000 words.

The compensation for such a lengthy write-up? Just $6. 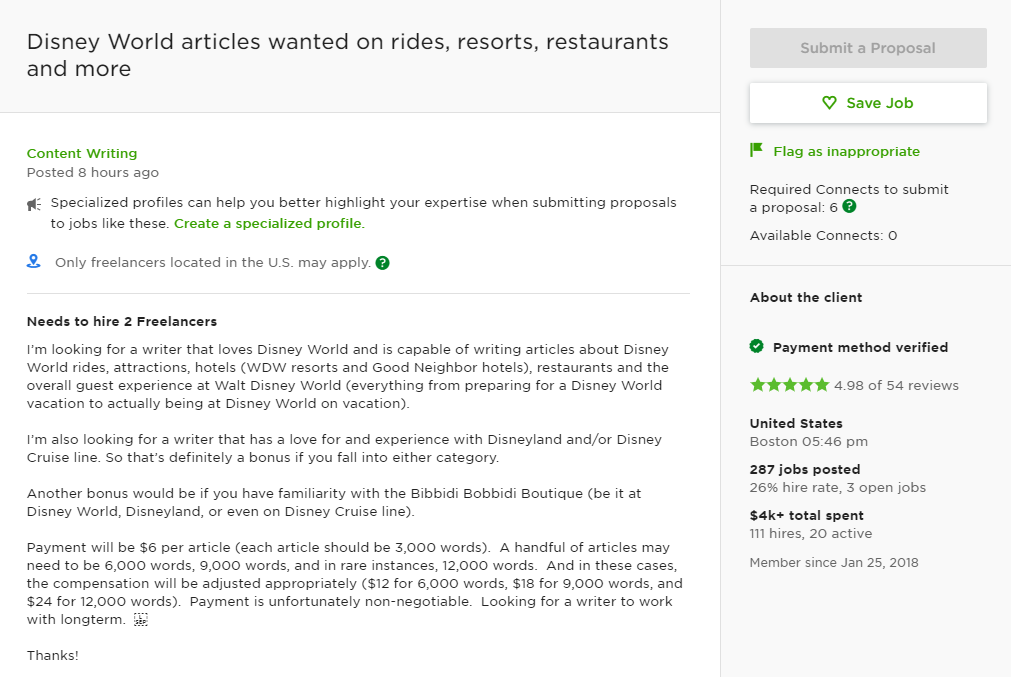 While the Upwork listing is legitimate — the same account has posted dozens of other gigs, including writing assignments related to other Disney parks, and been given favorable reviews by freelancers — Orlando Rising could not verify who posted it. Upwork’s system requires freelancers to be verified and make a certain number of “connects” before being able to contact any client offering work through the site.

The posting’s mere existence, offering fractions of a penny per word, raised an interesting question: how much are popular Disney blogs paying their writers?

One of the more popular blogs covering Disney parks is Chip and Company. According to website traffic estimator SimilarWeb, ChipAndCo.com attracted 270,000 visitors in July 2019. On Facebook, the site has more than 680,000 followers and its articles have been shared nearly 1.5 million times since June. An affiliated site, DisneyAddicts.com, attracted around 85,000 visitors in July.

That same month, the site posted a Facebook ad looking for new contributors. Among the respondents was Georgeanne McCreary, a full-time registered nurse and frequent Disney World visitor who thought writing for a Disney blog may be a fun way to earn some extra cash.

What ChipAndCo.com offered, according to emails McCreary provided to Orlando Rising, was $3 per article for a minimum of 250 words — a rate of 1.2 cents per word. 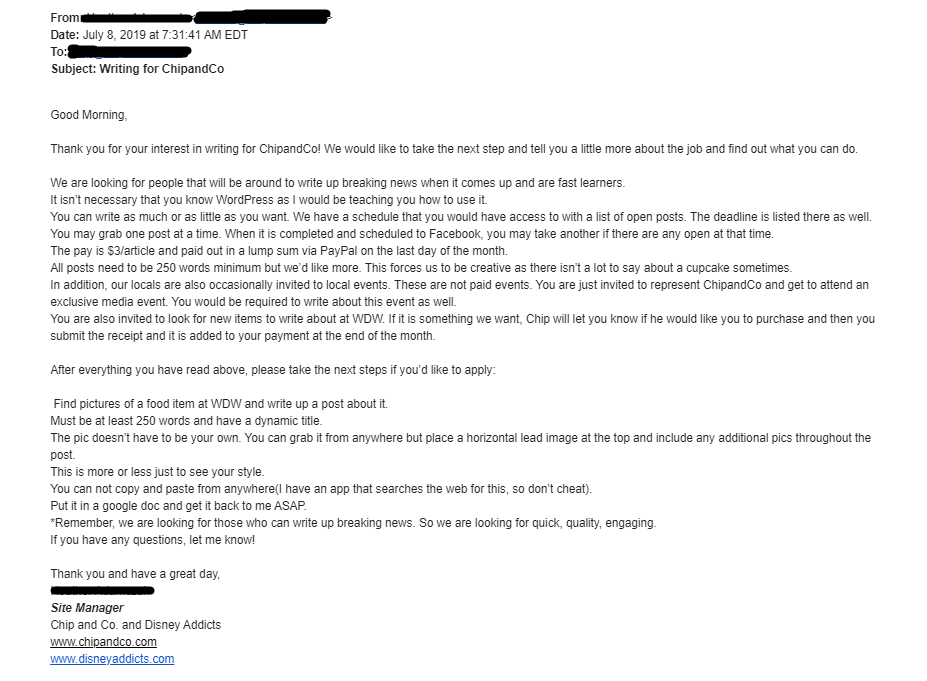 Email from Chip and Co. provided to Orlando Rising

McCreary said she never bothered responding to the email after seeing how little she would be paid for her contributions.

“I don’t think that I had a specific number in mind when I applied It would have to be an amount that would make it worth my time,” she told Orlando Rising. “I chose not to follow up on this offer because I think $3 for an article is just plain insulting.”

McCreary had originally posted about her experience with Chip and Company on Twitter, which led to the site’s account blocking her. When Orlando Rising reached out for comment, owner and editor-in-chief Chip Confer refused to discuss what he pays writers for their work.

“What we pay our writers is a private matter and not something we discuss out in the public realm,” he said in an email.

When Orlando Rising emailed Confer again quoting from the email McCreary received, he did not respond. Like McCreary, Orlando Rising is now blocked by Chip and Company on Twitter.

What about other sites?

So is $3 the going rate for Disney World blog posts? We asked seven of the most heavily-trafficked Disney-centric sites to find out.

Among those who responded was WDW News Today, a site known both for breaking major news about upcoming attractions as well as saying it’s “at war” with the Walt Disney Company after two rumors first reported by the site were forcefully denied by Disney.

Site founder and CEO Tom Corless said all writers on his site are paid — some per article and some by the hour.

“The per piece writers make $12 an article, roughly 300-400 words (depends on the news, sometimes it is even less),” he told Orlando Rising. “Hourly writers are paid up to $19 an hour. Our theme park reporters also start at $12 an hour, higher than most theme park jobs. Many of my reporters make more than that now and have already seen multiple pay raises.”

WDWNT.com does not accept unpaid submissions, according to Corless, adding that “I don’t know how that would be fair to a writer if we are making any money from it.”

Kurt Schmidt, owner of Inside The Magic, said articles on his site — which boasts 636,000 Facebook followers and 93,000 Twitter followers — are based on a commission structure, meaning more clicks equal higher pay.

“Technically, I don’t have any upper or lower limit for pay and I pay writers for an article over its entire life, so if it’s evergreen and gets consistent views for years, it’s easy to imagine a writer earning over $1,000 for an article even though it hasn’t happened yet in the 11 months since I instituted this pay structure,” he told Orlando Rising. “Of articles written since June 1, it looks like I have 21 articles in which the pay has already been over $100, but if I were to take a wild guess, at an average, it is in the $25 to $50 range. I’m sure our average article is 500 to 800 words.”

So at the low end of Inside the Magic’s scale, a 500-word article that comes out to $25 in pay for the writer equals a per-word rate of 5 cents. Schmidt said he’s paid as much as $500 for a single 500-word article, but has also published some articles from writers on an unpaid basis.

Other site owners were less forthcoming about how much their writers are paid.

“I don’t want to discuss our compensation as that is a personal matter, but it is well over $6 per article,” said LaughingPlace.com’s Benji Breitbart.

Five other blogs did not respond to Orlando Rising’s questions about what they pay content creators: MiceChat.com, MousePlanet.com, WDWMagic.com, AllEars.net, as well as WDWInfo.com, which discloses that it pays $25 per article but doesn’t mention a desired word count.

It’s difficult to get a grasp on what sites should be expected to pay for blog posts and news articles. Digital media is a hungry beast with a constant craving for new content and that sort of demand keeps pay rates low.

In fact, there are multiple sites like Who Pays Writers with crowdsourced lists on what online publications pay for articles, since many won’t disclose such rates publicly. Recent rates reported include 25 cents per word for a 500-word article for Curiosity.com requiring “little to no reporting. The Hollywood Reporter paid $1.64 per word for a 3,500-word profile piece that needed more journalistic skill. A heavier workload doesn’t always equal more money; one freelancer reported being paid just 3 cents per word for a 1,120-word feature story for Go World Travel magazine.

In an article for The Balance Careers, freelance writer Allena Tapia warned writers to expect lower rates from site known as “content mills,” saying payment “can range from less than 1 cent per word to 10 cents per word, with articles averaging 500 to 600 words.”

None of the Disney-centric sites that spoke to Orlando Rising were offering only $6 for a 3,000-word article like the Upwork post that motivated this article. At first, Kurt Schmidt of Inside the Magic questioned whether the listing was even real.

“It’s actually sad that someone views that as reasonable pay,” Schmidt said. “I would prefer to ask people to write for free than pretend to pay them at a rate like that.”

Tom Corless of WDW News Today did not feel as negatively about the rate, saying that for the first eight years his site was operating, everyone was a volunteer.

“If the site is making way more than that and can afford a decent price per piece, than I agree with the public, but we don’t know that,” he said. “Running these things as a business is scary, as I assume most start it as a hobby, like I did. If you have no formal business schooling, you may just be trying to balance the books as best you can.”

Author’s note: In the interest of full disclosure, I feel it’s necessary to answer the same questions posed to other Disney sites in the course of writing this article, as we are also a theme park news site. 100 percent of Orlando Rising’s content has been written by me since I took the over the site in January 2019. The site generates revenue through advertising. I am not accepting any outside editorial contributions at this time and I would never ask reporters to work for free.