A SeaWorld Orlando penguin has shed her protective wetsuit and grown a fresh coat of feathers.

Wonder Twin, a 26-year-old Adelie penguin, had experienced feather loss, which can happen to penguins in their natural habitats and wild populations. Penguins have about 100 short, stubby feathers per square inch that insulate them from the cold.

SeaWorld’s aviculture and wardrobe teams created a custom wetsuit in August that was designed to mimic her natural coat of feathers so she could regulate her body temperature.

Wonder Twin began preening the wetsuit as if it were her feathers. She started eating more and the wetsuit had to be altered to fit her larger figure.

SeaWorld vets noticed she began growing a new set of feathers and was starting to molt in December. They removed the protective suit and now she looks just like the 300 other penguins living at the park’s Antarctica: Empire of the Penguin exhibit.

Her transformation is just one example of the many animals who benefit daily from SeaWorld’s dedicated care and veterinary teams, according to a SeaWorld release. 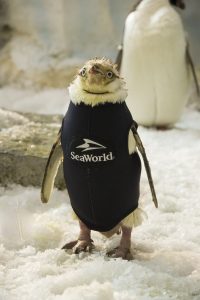