Walt Disney World parks remain the most-visited theme parks in Central Florida, but it was SeaWorld Orlando that saw the biggest jump in attendance last year.

SeaWorld Orlando welcomed nearly 4.6 million visitors last year, according to the 2018 Theme Index, an annual estimate of theme park and museum attendance released by the Themed Entertainment Association and AECOM. The 16 percent rise was the highest year-over-year increase among Orlando parks, and second in North America only to its sister park in San Diego, which saw attendance figures jump by an estimated 20 percent.

“SeaWorld’s good performance is creditable to investments in new rides and programming and leveraging the Sesame Street IP, in addition to working actively to change the conversation about the parks — internally and externally — and making other positive changes,” the report said.

SeaWorld had reported increases in attendance across its entire chain for every quarter in 2018. Busch Gardens Tampa Bay also saw a bump in attendance, up 4.5 percent to an estimated 4.14 million guests. 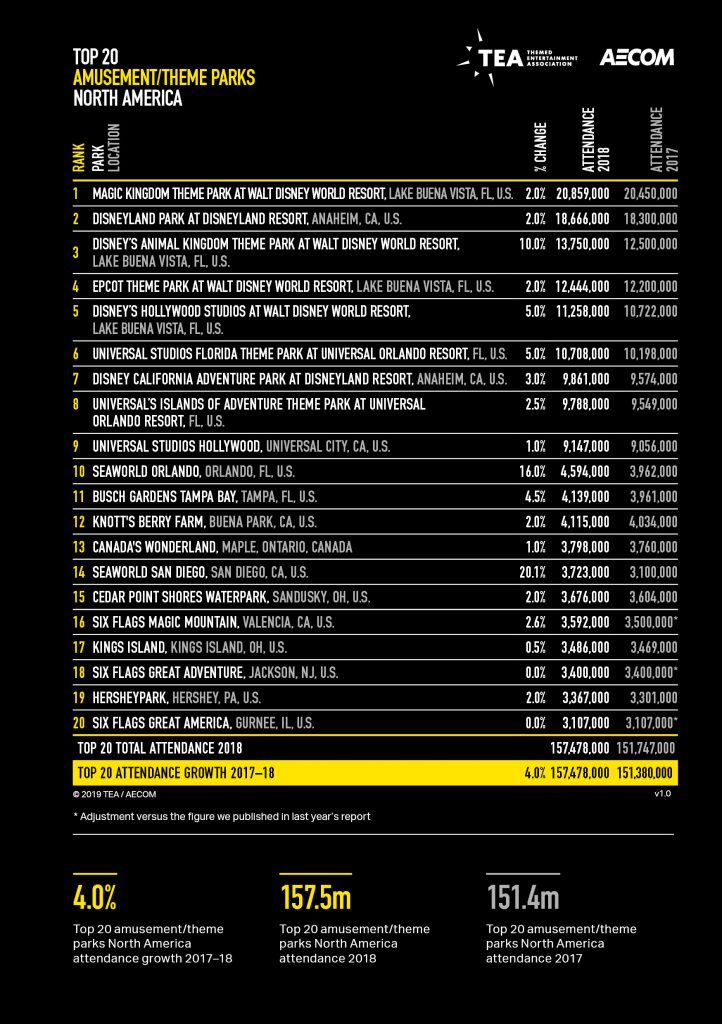 Disney continues to be the global attendance leader, however. It was No. 1 for attendance among all theme park groups (157.3 million worldwide, up 4.9 percent) and had the most-visited theme park in the world (Magic Kingdom, with nearly 20.9 million guests, a 2 percent increase). Overall, Disney parks occupied six of the top seven slots in North America and 12 of the top 25 worldwide. Typhoon Lagoon and Blizzard Beach at Disney World occupied the Nos. 2 and 3 on the worldwide waterpark attendance list.

Disney’s Animal Kingdom saw another double-digit attendance jump, with a 10 percent increase to an estimated 13.75 million guests in 2018. The surge from the opening of Pandora: The World of Avatar in 2017 had unseated Epcot as Disney World’s No. 2 park in terms of attendance. The gap grew in Pandora’s first full year of operation, as Epcot saw a 2 percent increase to 12.44 million guests.

Disney’s Hollywood Studios saw attendance increase by 5 percent, reflecting the addition of Toy Story Land in June 2018, but it remained the least-visited theme park in Disney World. That’s expected to change once Star Wars: Galaxy’s Edge opens at the park on August 29.

“The biggest growth is IP-driven,” said Brian Sands, AECOM’s director of economics for the Americas. “The big players are in a position to command the big IP – and have full awareness of the power of these franchises and what they can do in a storytelling environment, with innovative experiences and rides, made immersive with state-of-the-art technology.”

Universal Orlando saw attendance gains of 5 percent at Universal Studios Florida and 2.5 percent at Islands of Adventure. The Volcano Bay water park was visited by an estimated 1.72 million guests in its first full year, making the sixth most-visited water park in the world.

“As a separate-gate offering, Volcano Bay is a valuable addition to Universal’s continued expansion and diversification of its Orlando property as a destination resort,” the report said.

Legoland Florida’s attendance was not included in the report, as it fell outside the Top 20 in North America. Its parent company, Merlin Entertainments, held its position as the No. 2 theme park group in the world behind Disney, with total estimated attendance of 67 million.

You can read the full report here.