When Universal Studios Florida made its public debut 30 years ago, it had all the star power, glitz and glamour of Hollywood.

What it didn’t have was its three biggest attractions, at least not in reliable operation.

“Other than Ghostbusters and the E.T. Adventure, nothing worked as planned,” said theme park historian Sam Gennawey, author of the book “Universal vs. Disney.” 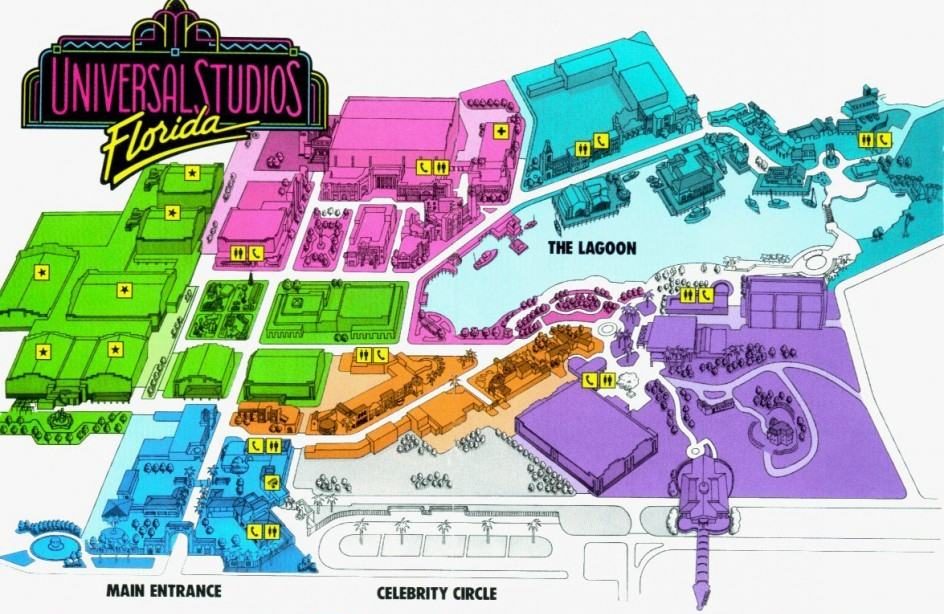 A 1990 map of Universal Studios Florida

Of course, the rides worked eventually. The opening day of what would become the Universal Orlando Resort is now remembered as a small stumble — a footnote, really — in Universal’s journey to becoming the greatest threat to The Walt Disney Company’s theme park throne.

But there were portents of all that would go wrong long before June 7, 1990.

MCA, then-parent company of Universal, first announced its intention to build a tourist attraction in Central Florida in 1979, perhaps an East Coast version of its popular studio tram tour in California. Over the next decade, the project would shift and change and nearly be scrapped altogether numerous times, even as Disney readied its competing Disney-MGM Studios project.

By the mid 1980s, Universal’s Florida plans had been reduced to a walkthrough attraction, King Kong included, according to Peter Alexander, the park’s show designer and executive producer who now runs the Totally Fun Company.

What shifted the park towards its eventual “Ride the Movies” motif was the involvement of Steven Spielberg, Alexander’s college roommate, in developing Back to the Future: The Ride after seeing the Kong animatronic being installed in Universal Hollywood’s tram tour.

From that point forward, Alexander said he had to convince Hollywood legend Sid Sheinberg, the president of MCA and Universal Studios, that they would do something they had never done up until that point: build rides, not just a studio tour.

“[Sid] goes, ‘we’ve never built a ride. We don’t know anything about building rides,’” Alexander recalled in an interview. “I said, ‘Yeah, so we’re gonna have some problems probably. At Disney, we had problems…when we opened up Epcot — I wasn’t there at the time, but all my friends told me — Spaceship Earth didn’t work for a month. I said stuff like that is going to happen. You get complicated stuff. He said, ‘Alright. Well, just don’t open until everything works.’”

That started the process of breaking popular parts of the Hollywood tram tour into the big standalone attractions for Orlando’s opening. There was Jaws, Earthquake, and Kongfrontation, while Back to the Future: The Ride was eventually delayed to 1991.

Universal tackled the construction of these technically advanced rides with a small engineering staff and outside firms like Ride & Show Engineering, a California company that designed both Jaws and Earthquake.

Instead of heeding Sheinberg’s warning, Jay Stein, the head of MCA’s recreation division, didn’t want to play it so safe.

“Jay took it upon himself to open that park and said, ‘You know what? If we don’t open this place, nothing’s ever going to work. You guys are going to fiddle around with this forever,’” Alexander said.

According to the Orlando Sentinel’s front page story about Universal Studios Florida’s grand opening, the three big rides were largely unavailable throughout the day. Even the E.T. Adventure was reported to have intermittent technical difficulties, along with a two-hour wait time.

Alexander, however, recalled that the situation wasn’t as bleak as it seemed.

Attractions in the front half of the park — including The Funtastic World of Hanna-Barbera motion simulator and the Ghostbusters and Alfred Hitchcock shows — were operating normally on that first day, Alexander said.

He attributed Kongfrontation’s closure to safety concerns, saying that the “talk back” system that interfaced the computers that controlled the 39-foot-tall King Kong animatronics with those controlling the ride vehicle wasn’t working.

“Theoretically, Kong could stick his finger into the ride vehicle and poke somebody out the other side, which wouldn’t have been good,” Alexander said.

Earthquake had programming issues two weeks before opening, Alexander remembered. Producer Larry Lester had “barely” gotten the ride to function at all by June 7, and it only began operating on a limited basis by the afternoon of the park’s second day.

The $30 million Jaws ride, however, had much deeper problems.

Alexander himself had developed the original ride’s storyline, including the section where the shark appeared to actually grab the boat with his teeth. It was then up to Ride & Show Engineering to make the ride system work. Alexander said elements of the attraction worked in tests for months, but very rarely did all the pieces work together.

“Everything broke down one after the other,” Alexander said. “It was impossible to get the whole ride to run and when it did run, it wasn’t very good.”

The problems didn’t get solved overnight. Kongfrontation had its opening delayed until August 4, 1990 — nearly two months after the grand opening.

Universal eventually sued Ride & Show Engineering over the Jaws ride, claiming the company had placed non-waterproof parts underwater, causing the constant failures in ride elements. The suit was settled for an undisclosed amount the following year, but Ride & Show insisted the real problem was that Universal didn’t allow enough time for testing.

“Basically, Universal didn’t have any experience with a ride like this,” Ride & Show CEO Eduard Feuer told the Orlando Sentinel in October 1993. “If we had built something like this for Disneyland, Disneyland maintenance would have taken it over and made it work.”

Eventually, Jaws suffered the most extreme fate of the opening day trio; after Universal spent much of 1991 trying to salvage the original version of the attraction, it was rebuilt almost from scratch, with the new version opening in 1993. Perhaps learning from their past mistakes, Universal allowed more than 500,000 guests to experience “technical rehearsals” of the ride for three months before it officially opened.

Downtime at the park’s three biggest attractions did not go unnoticed by opening day guests. According to the front page story in the Sentinel from June 8, 1990, the most popular attraction that day may have been the guest relations desk, with about 1,000 visitors demanding refunds.

“Disney doesn’t have anything to worry about,” visitor Marva Gilbert told the Sentinel at the time.

From opening day and throughout the summer, as technical difficulties and delays continued, Universal placated angry guests with a two-for-one ticket deal, offering free passes for anyone who bought a ticket and entered the park throughout its first summer.

“This built trust,” Gennawey said. “Second, Universal became the place where Disney and SeaWorld cast members came to play. The locals kept it alive and the Halloween event solidified that bond.”

Opening day problems are a fact of life in the theme park industry, with Alexander noting Epcot had issues on its opening day eight years prior to Universal Studios Florida. In the end, Universal did present a challenge to Disney almost immediately — it welcomed 6.9 million guests in 1991, its first full year of operation, well above predictions in pre-opening feasibility studies, according to Alexander.

He left Universal early in 1991, before planning began on Universal Orlando’s second gate, Islands of Adventure.

“I’d like to say that it all fell apart when I left, but it didn’t,” Alexander said. “It was all great. They took basically what we had done, which was to make a ride park with state-of-the-art interactive rides, and they just went with that and they made it better and better and better. That’s the way it is now. It’s just better.”