Kids can practice their ninja skills at LEGO NINJAGO World, which premieres Jan. 12 as the seventh addition to LEGOLAND Florida Resort since opening five years ago.

NINJAGO places guests into the action of the “LEGO NINJAGO: Masters of Spinjitzu” TV show, which was the inspiration for the new land. The 1.35-acre land is filled with interactive, outdoor activities including a climbing wall and a chance to master the art of Spinjitzu on Kai’s Spinners. Jay’s Lightning Drill will test reflexes with high-speed targets.

“Since we opened in 2011, we’ve grown our business with new lands, new attractions, on-site accommodations and amazing experiences for our guests,” said Adrian Jones, general manager of LEGOLAND. “LEGO NINJAGO World is an incredible addition to our park, one that adds amazing experiences that wouldn’t have been possible when we opened just five years ago.”

Sibling ninjas Kai and Nya will be at the land for daily meet and greets. Wu’s Warehouse, a themed retail shop will sell LEGO NINJAGO building sets, clothing and souvenirs.

And of course, there’s a hands-on building experience where kids can help create a LEGO model of a mountaintop NINJAGO monastery called Zane’s Temple. 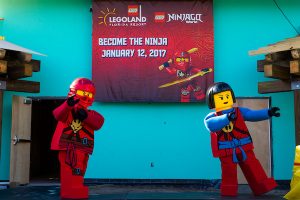