According to a post on the official Disney Parks Blog, the Tike’s Peak area of the park will now feature Anna and Elsa’s igloo castle and statuettes of Olaf and his Snowgie friends in the wading pool.

On the same day that Blizzard Beach reopens, Disney World’s other water park, Typhoon Lagoon, will close again for seasonal maintenance. The two parks have operated at the same time since before the COVID-19 pandemic; Blizzard Beach reopened in March 2021 and then closed again this past January when Typhoon Lagoon was ready to welcome back guests.

Cedar Point will offer some holiday cheer with a new event at its Sawmill Creek hotel a few miles from the theme park.

Called “Seasons of Joy,” the event will offer special holiday entertainment, decorations throughout the resort, and special menu items including a pop-up bar called Merry Mulligan’s. Nothing will be happening at the Cedar Point park itself, so don’t be expecting winter rides on Steel Vengeance. 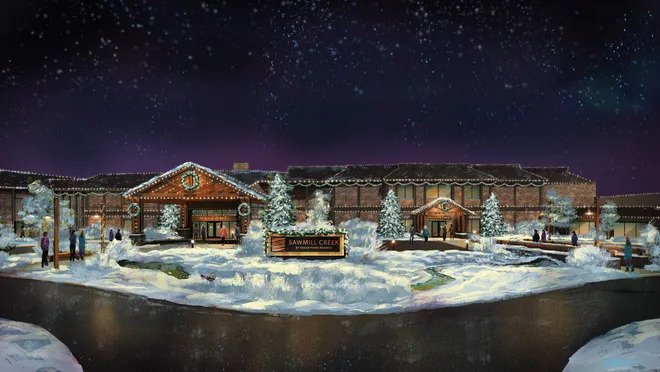 Sawmill Creek decked out for the holidays (Cedar Point)

For coaster fans who have been waiting for Indiana Beach to open its relocated American Dreier Looping coaster — well, you’ll have to keep waiting, but the park did issue an update on the long-delayed attraction.

In a Facebook post Monday, Indiana Beach said, “The lead car has been put on the track for initial testing.”

Indiana Beach initially announced back in November 2020 that the coaster, which was designed and manufactured by the late Anton Schwarzkopf, would open in 2021. Much of the ride remained in pieces throughout the year, and the 2022 season came and went with no update on an opening date.

The coaster last operated at La Feria Chapultepec Magico in Mexico City as Quimera in September 2019, when a car derailed and two riders were killed. An investigation blamed the accident on lack of maintenance rather than flaws in the ride itself. Indiana Beach chief operating officer Tom Crisci told Theme Park Tribune in 2020 that the coaster would be updated and thoroughly inspected before its debut at its new home.