Are you willing to pay between $7 and $15 per person to skip the line at some of Disney World’s most popular attractions?

Guests will have to ask themselves that question when Disney Genie+ and Lightning Lane, the paid replacements for the FastPass+ ride reservation system, launch at Disney World Oct. 19.

The company unveiled Friday more details about the service and answered some basic questions about what fans can expect.

What is Disney Genie?

This is the free version of a new service through the existing My Disney Experience app that can help with planning your day at Disney World, featuring forecasts of future wait times and designing custom itineraries based on what rides, shows, and restaurants you want to visit.

A paid option that allows you to make selections for Lighting Lane — essentially the old FastPass+ system and queues where you get a return time to experience the ride — at more than 40 attractions in Disney World’s four theme parks. This will cost $15 per person, per day at Disney World ($20 at Disneyland when it launches), but that’s a one-time fee, not per attraction.

What this changes for Disney World is it reduces advance planning. No more waking up 60 days before your park visit to secure FastPass+ slots. It’s all done the day of.

So what rides do I have to pay extra for?

For the launch day of Oct. 19, Disney says the prices will range from $7 per person, per ride on Expedition Everest at Animal Kingdom to $15 for Star Wars: Rise of the Resistance at Disney’s Hollywood Studios. Between Oct. 19 and Oct. 23, however, Disney showed that some prices would vary; Seven Dwarfs Mine Train at Magic Kingdom cost $10 on Oct. 19, but $12 four days later.

Guests will not be allowed to cancel or change these individual selections once they’ve been made.

Here’s the full list of available attractions, separating what Lightning Lane rides are available through Genie+ and which ones you’ll have to buy a la carte. 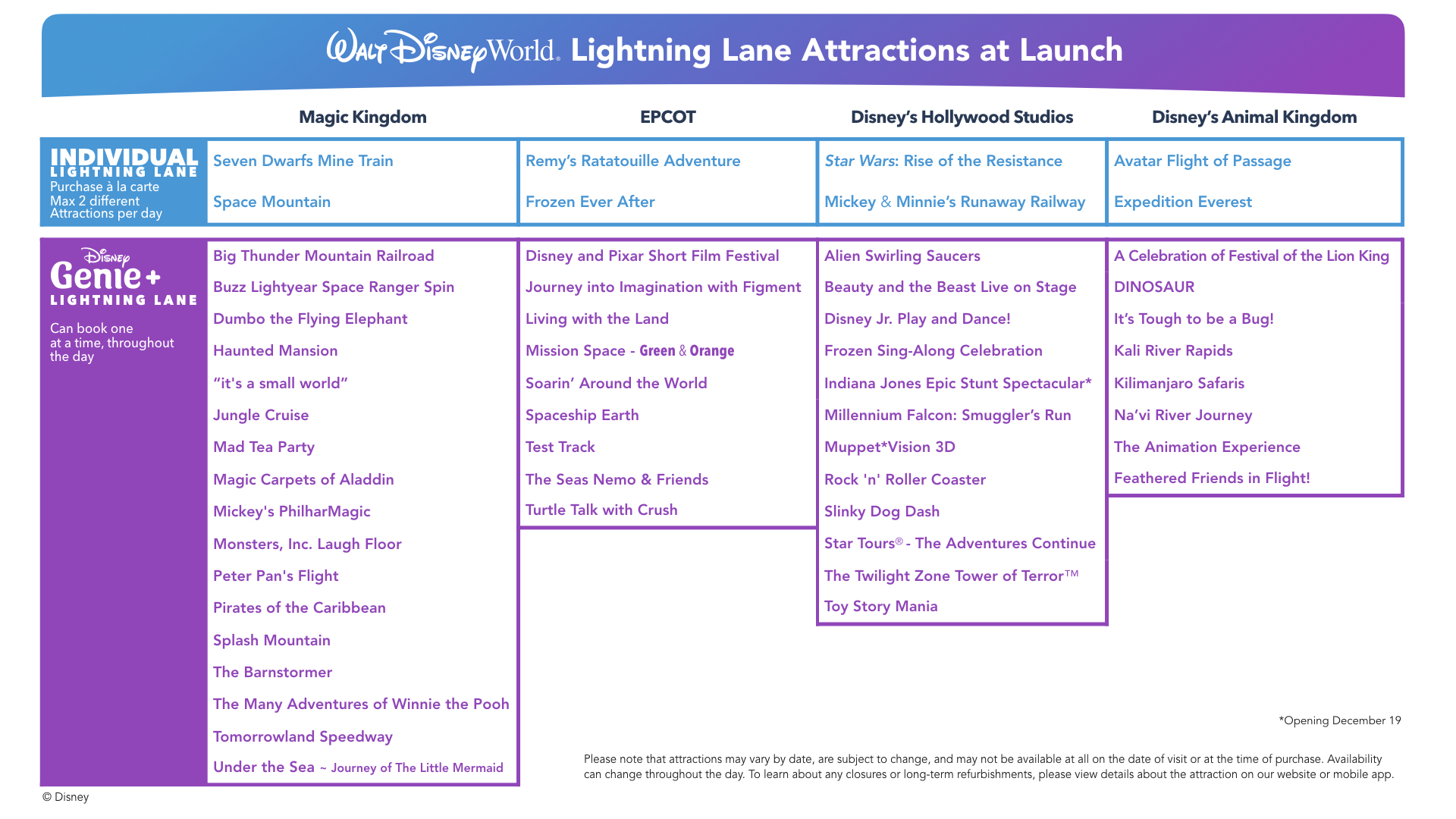 Are there limits to how many Lighting Lane reservations I can make?

For the “Individual Lightning Lane” selections, you can only buy two per day. For the other selections available by buying Genie+, there’s no daily limit, but you can hold only one Lightning Lane reservation at a time — EXCEPT if your return time is more than two hours away, then guests can make a second selection.

For Disneyland Resort guests, there is no date set for launching the service. Once it does, it may feel more familiar than it will for Disney World crowds, as Genie+ is based on the model set by the former Disneyland MaxPass service.

Disney has said that more than 15 rides at Disneyland Park and Disney California Adventure will have Lightning Lane, and has confirmed that Radiator Springs Racers will be among the “Individual Lightning Lane” options requiring an extra purchase.