On March 24, 2002, the Oscars named a winner in its newest category, Best Animated Feature.

It wasn’t Disney, the studio that invented the animated feature. The honor went to “Shrek” — the sarcastic subversion of a fairy tale made by DreamWorks Animation, co-founded by former Disney studios chief Jeffrey Katzenberg.

The post-Oscars celebration on Sunday night flowed into a hungover Monday, when Katzenberg called David Lipman, the film’s co-executive producer, into his office with a new project: a theme park attraction that picked up after “Shrek” and bridges the gap with its sequel.

Katzenberg said the script should be finished immediately — so Lipman went back to his own office and wrote the script. By 7 a.m. the next morning, the script for what would become Shrek 4-D was in Katzenberg’s hands.

“He was chuckling as he was reading it,” Lipman said in an interview with Theme Park Tribune. “Afterwards, he threw the script back at me and he said, “Great. You have $11 million and 11 months.”

The attraction went on to run at

The right partner with Universal

Though DreamWorks was still an independent company at the time, Universal theme parks were always intended to be the new attraction’s home. Shrek had already found a temporary place in Universal Studios Hollywood with the short-lived “Shrek Live!” stage show in 2001.

Scott Trowbridge, the future Disney Imagineer and then the head of creative development for all Universal attractions, led Universal’s side of the project, closely collaborating with the story and animation developed by DreamWorks and its computer animation partner, Pacific Data Images.

“We worked hand in hand, throwing ideas to each other about what else we could do with the time and money available,” Simon J. Smith, the director of Shrek 4-D and head of layout on the original “Shrek” film, told Theme Park Tribune, adding that Trowbridge was “fantastic to work with.” 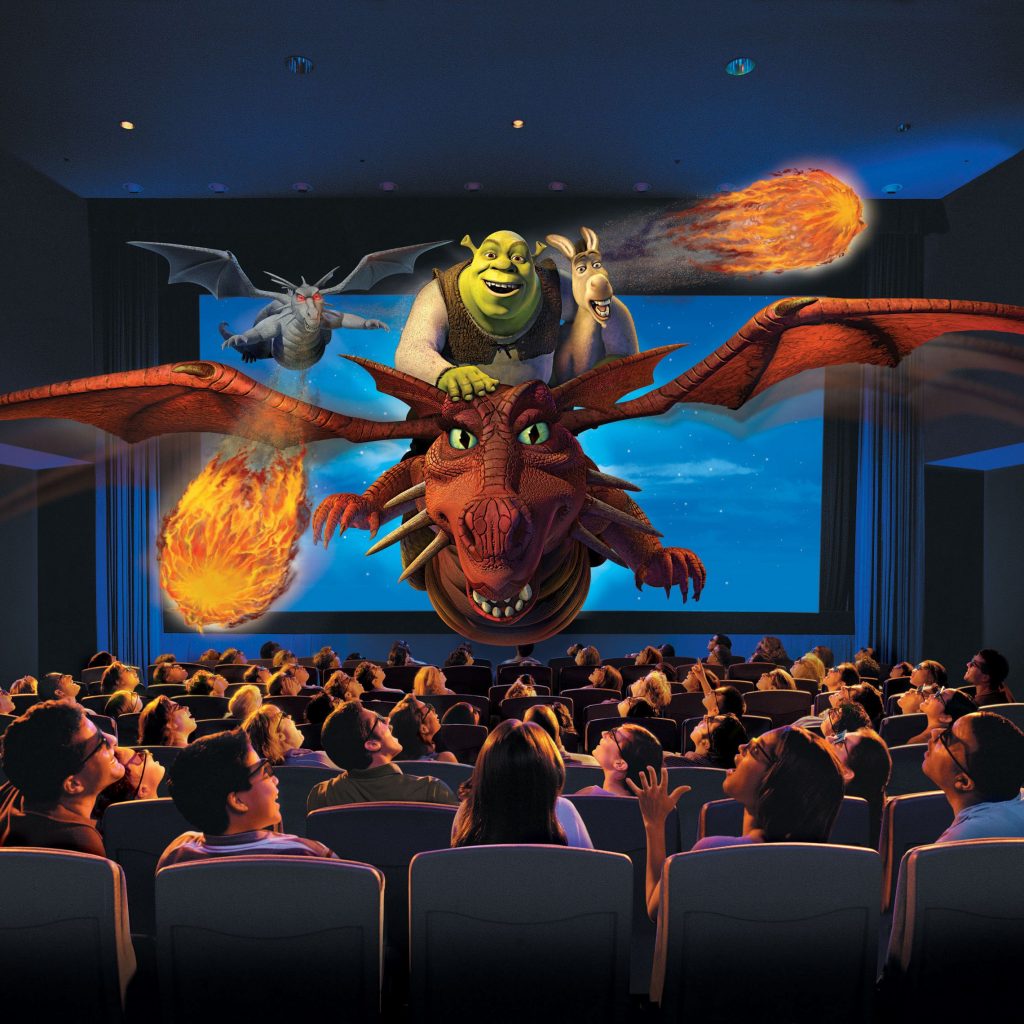 Looking back on Shrek 4-D nearly 20 years later, Smith agreed that Universal was the right fit.  The film, its character, even DreamWorks itself aligned with Universal’s status as the underdog bold enough to challenge Disney’s supremacy in the theme park world.

“The tone was perfect for Universal, in that “Simpsons,” edgier type humor,” Smith said. “We can’t compete with Disney, because Disney’s Disney, and so you have to find some other ways to bring something fresh and new.”

By the early 2000s, 3-D films were long-established attractions in the theme park playbook. Having parts of the theater move along with film elements wasn’t new, either, as Epcot’s Honey, I Shrunk the Audience had shown since 1994. Shrek 4D upped the ante with crisper digital projection and truly Hollywood-level production, using not only the original film’s voice talent but its animation talent as well.

In turn, the DreamWorks/PDI team was excited about getting to play in a new sandbox with lots of new storytelling toys. Your normal theatrical release doesn’t have a queue and preshow space to prepare guests for the world they’re about to enter. Nor does it offer the chance to rock them around in pneumatically powered seats, spray water, or shoot air at their legs to simulate an invasion of spiders. 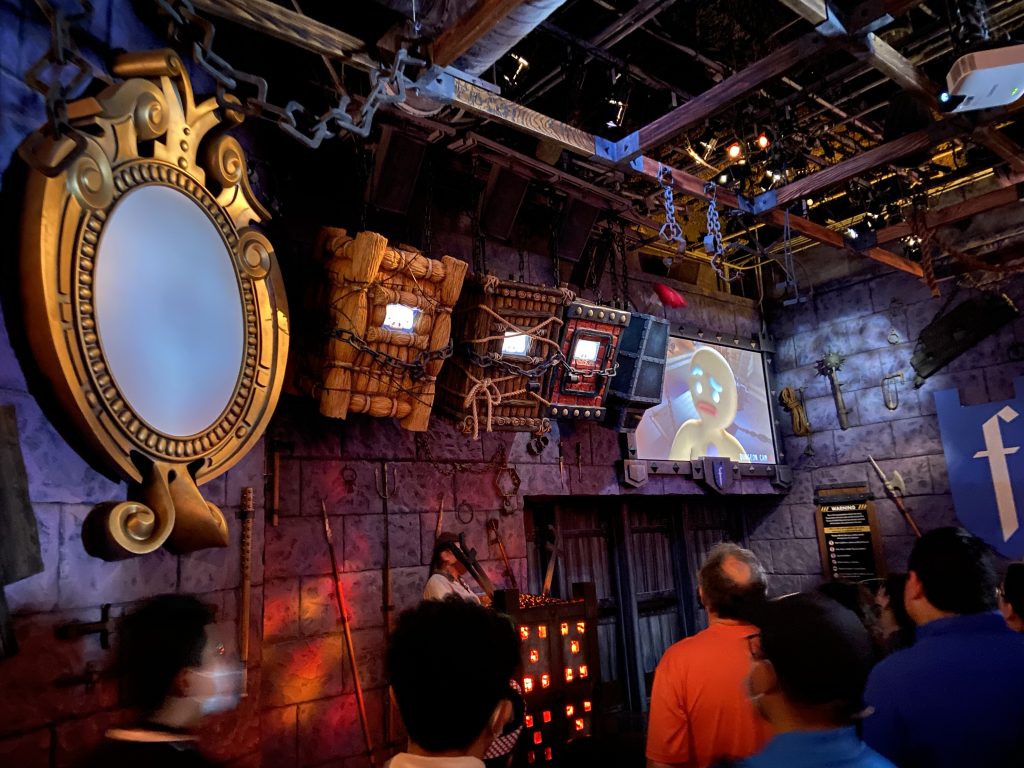 All those tools were now at their disposal in a theme park setting, though some ideas didn’t make it into the U.S. attractions.

“We did discuss Smell-O-Vision for a while and decided to abandon it because you can’t get the smell out of the theater fast enough and it smelled like poop,” Lipman said. Ultimately the Universal Studios Japan version did feature limited use of scents, such as gingerbread.

Rather than feeling constrained by the shorter film, the DreamWorks team felt liberated. By leaving the quick summary of the first film’s events to the preshow, the film could jump into “second act writing,” as Smith put it, quickly jumping into a chase scene with established characters.

“For me, what was fantastic about this is that nobody had to change,” Smith said. “Shrek and Fiona didn’t have to change. It was just like, how can we have as much fun as we can with all these different elements at play?”

All that fun did have to be organized.

“I had this huge spreadsheet where I wanted to keep the audience constantly sort of surprised,” Smith said. “So verbal gag here, then a visual gag here, a musical gag then a physical gag with Donkey sneezing, then hit them with this and with that, and so there’s this constant sort of array of attacks on the audience to make them feel like they’ve been through a journey.” 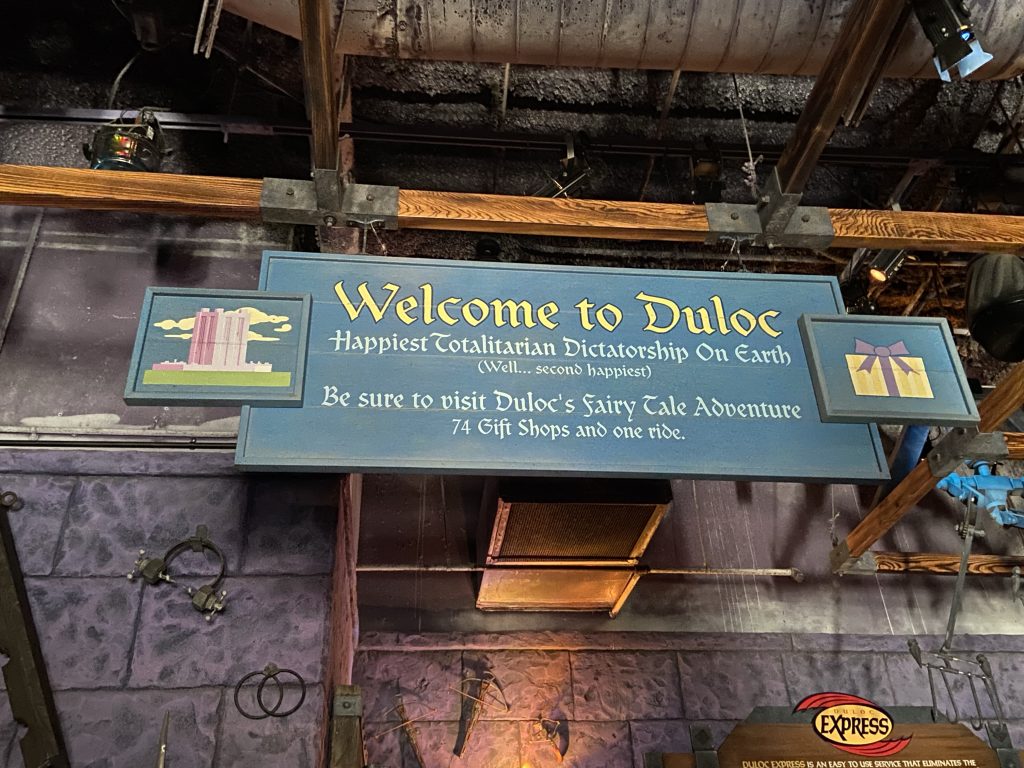 One of the signs in the preshow area (Theme Park Tribune)

Beyond the theme park elements, multiple members of the Shrek 4D team mentioned the digital sound design as among their favorite parts of the production. It was the first DreamWorks Animation worked with Skywalker Sound, the fabled division of Lucasfilm.

Some of the sound team that worked on Shrek 4D included two-time Oscar winner Randy Thom, Oscar nominee Dennis Leonard and prolific foley artist Dennie Thorpe, whose resume includes credits from “Return of the Jedi” to “Jurassic World.” Will Files, who went on to win an Emmy for his sound editing work on “Stranger Things,” was part of the team that worked on-site at the parks for each of the first three installations of Shrek 4D, alongside Smith, Lipman, and film editor Michelle Belforte.

Taking Shrek around the world

The turnaround time for Shrek 4D was remarkably fast by modern theme park standards, lasting from March 2002 to March 2003 for the DreamWorks/PDI team — serving as a convenient gap project as the studio began work on what would become “Shrek 2” and “Madagascar.”

Universal Studios Hollywood’s version of the attraction opened first in May 2003, debuting with a celebrity-filled premiere complete with a green, not red, carpet. The Hollywood space required some audio adjustments to compensate for the theater’s long and thin shape, but was otherwise identical to the experience at Universal Studios Florida. 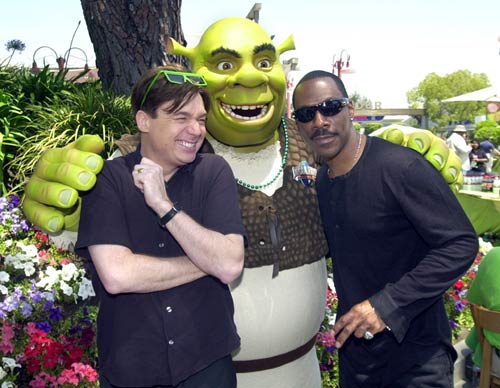 Mike Meyers and Eddie Murphy at the 2003 opening (Universal)

In Orlando, while there were some early discussions of Shrek 4-D replacing The Funtastic World of Hanna-Barbera and using its existing motion simulators, it was instead placed across the street in the soundstage that had previously hosted Alfred Hitchcock: The Art of Making Movies. Universal Studios Japan’s version opened next in June 2003, sharing the park’s 4-D Cinema theater with Sesame Street 4-D Movie Magic.

As this film predated DreamWorks’ acquisition by NBCUniversal and Comcast, it was later brought to non-Universal parks: Warner Bros. Movie World in Australia and Movie Park Germany. The most recent installation was in Universal Studios Singapore, which soft opened in March 2010. There, Shrek 4-D anchors a “Shrek”-themed land called Far Far Away.

‘One of my favorite projects’

Whenever Universal Orlando closes an attraction, props and signs can be found for sale at the Williams of Hollywood shop for a unique piece of memorabilia. Lipman, however, told Theme Park Tribune he doesn’t want any physical piece of the attraction, saying the “memories made making it” would suffice.

His favorite story from the production was getting an effusive phone call from Steven Spielberg, himself a longtime advisor on Universal theme park attractions.

“I get a phone call from Spielberg saying, ‘It’s fantastic, it’s the best CGI I’ve ever seen,’” Lipman recalled. “‘I’ve had so much fun and I took George Lucas with me.’” 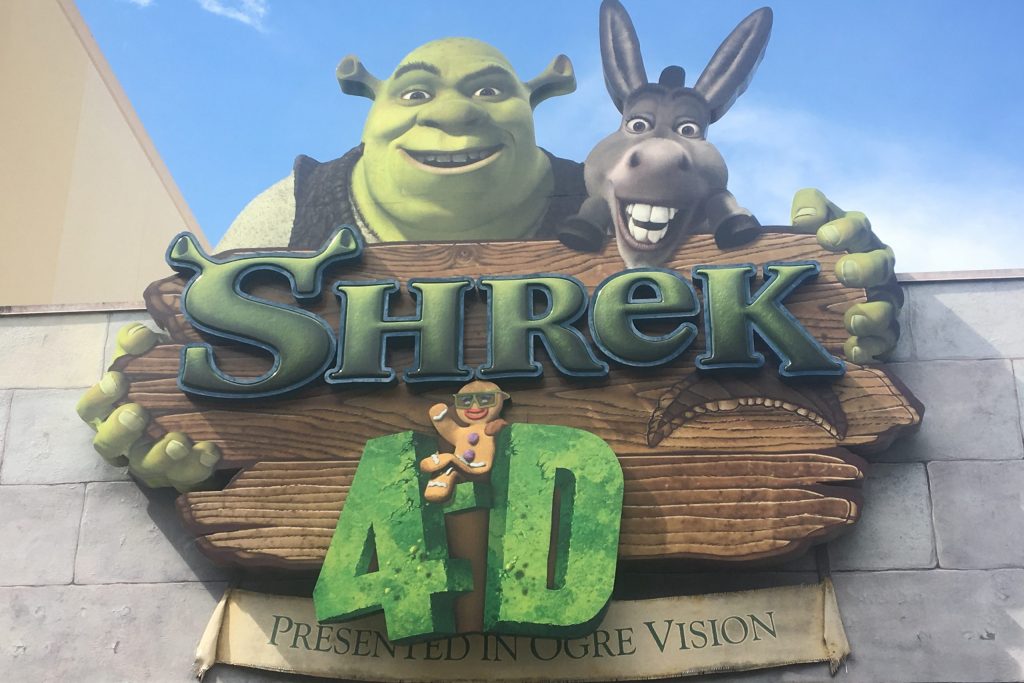 Smith also remembered getting praise from Spielberg and hearing about directors Robert Zemeckis and Ang Lee asking for tickets to experience the attraction. In speaking to him about Shrek 4D, it was clear that it holds a special place for him as his first director credit for DreamWorks, before he directed the features “Bee Movie” and “Penguins of Madagascar.”

“Shrek 4D was one of my favorite projects that I ever worked on,” Smith said. “There was no pressure of a release or box office or any of those concerns, but only how can we entertain people as much as possible, in this world, with the time and money that we have.”

He did have one request if he’s allowed to take one memento from the Universal Orlando attraction: “Pinnocchio’s nose would be quite funny.”

Shrek 4D attracted waits of two hours or more in its early years. In Orlando, its popularity warranted building a second theater in 2005 to double its capacity.

Eventually, as the “Shrek” franchise went dormant, that demand dwindled. Since 2015, Orlando’s second theater has been able to be closed for months to use the space for a Halloween Horror Nights house. Guests weren’t giving it the same kind of high marks by the end, either; Touring Plans readers gave it a rating of 3.5 stars out of five, with lower ratings among teens, young adults, and the over-30 crowd.

Universal Studios Hollywood’s Shrek 4D closed in August 2017. Smith made a pilgrimage to see it one last time, joined by his family and meeting up with others who had produced the project. It was actually the first time his children had gotten to see the film. Smith said his kids loved it and wanted to go again, but he declined to join them, saying, “I got quite emotional. I just wanted to get one last time.” 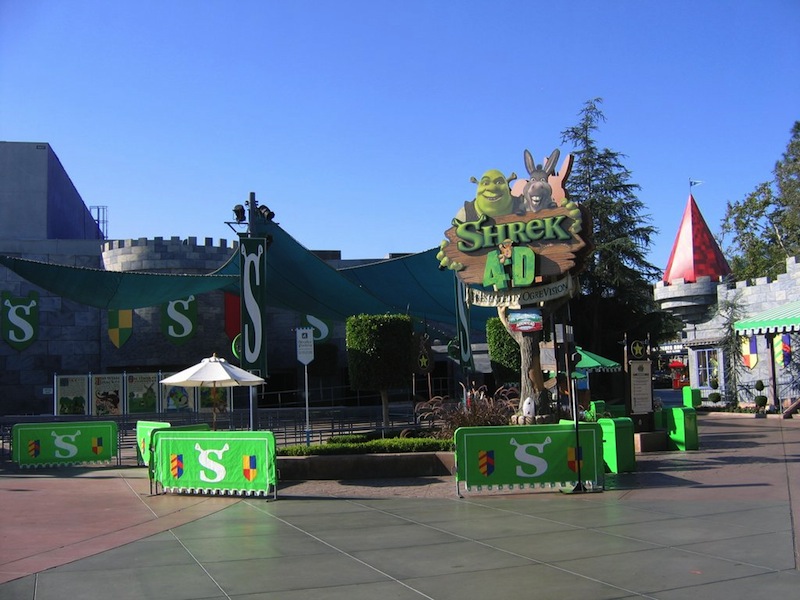 Hollywood version of Shrek 4-D before its closure (Universal)

Lipman said he hadn’t seen Shrek 4D since the year it opened, but Smith recalled returning to the Hollywood attraction every few years.

“I’m very proud of it,” Smith said. “I’m amazed it’s run for this long and it’s been incredibly satisfying, because you know, when you direct a movie, normally it’s in theaters for maybe six to eight weeks and then it’s kind of done, you don’t get to experience with people anymore.”

The future of Shrek in Universal parks

It’s mere speculation as to whether the “Shrek” franchise will get another attraction stateside. After all, there hasn’t been a film released in the series since 2010’s “Shrek Forever After.” But there are reasons to be a believer in its future prospects. Now under the Comcast/NBCUniversal umbrella, DreamWorks has no other franchise that has grossed more at the box office than “Shrek,” and should a fifth film materialize, Universal may not want to waste its enduring popularity.

If and when another “Shrek” attraction comes to Orlando, it won’t be located at the former Shrek 4D theater.

Barring some sort of misdirection strategy, Universal all but confirmed that the space will be utilized for some sort of Minions-themed attraction, creating a mini-land at the front of Universal Studios Florida with Despicable Me Minion Mayhem. While no replacement has been officially announced, the prevailing rumor is it will be an interactive, walkthrough attraction themed around the Villain-Con seen in 2015’s “Minions.”

For now, Shrek is retaining a presence in Universal Orlando, as his meet-and-greet with Donkey remains open. If watching the film at home isn’t enough, the Shrek 4-D attraction is still in operation at Universal parks in Japan and Singapore.

“I’m going to have to fly to Japan and go on it there,” Smith said.