The list of available attractions will be limited to 15 at Disneyland and more than 40 across Disney World’s four parks, including Big Thunder Mountain Railroad, Millennium Falcon: Smugglers Run, and Haunted Mansion. Guests with reservations will use the old FastPass+ queues, now rebranded as Lighting Lane.

At Disneyland, Genie+ users will get unlimited PhotoPass downloads, same as they did with MaxPass. At Disney World, Genie+ will offer “augmented reality lenses,” though Disney did not elaborate further.

The second service appears to be a U.S. version of the pay-per-attraction FastPass equivalent at Disneyland Paris. Guests will have to pay for two Lightning Lane reservations to the most popular attractions, with Disney singling out Seven Dwarfs Mine Train and Radiator Springs Racer. Disney also stated that, “Pricing for this option will vary by date, attraction and park and will be announced closer to launch.”

In an interview with D23, Disney’s official fan club, Disney Parks, Experiences, and Products Chairman Josh D’Amaro revealed that Star Wars: Rise of the Resistance will be available through this pay-per-ride option.

“Guests show up in the morning and they try to get into the virtual queue,” D’Amaro said. “We get as many people on there as we can, but inevitably someone is disappointed. Now there’s another option on top of the virtual queue so if Rise of the Resistance is the reason you’re at Disneyland or Disney’s Hollywood Studios, there will be an option for you to purchase Rise of the Resistance. So again: flexibility, optionality, better guest experience overall.”

Virtual queues will still be used for some attractions. In its announcement, Disney confirmed that Epcot’s next attraction, Remy’s Ratatouille Adventure, will use a virtual queue when it debuts on Oct. 1. 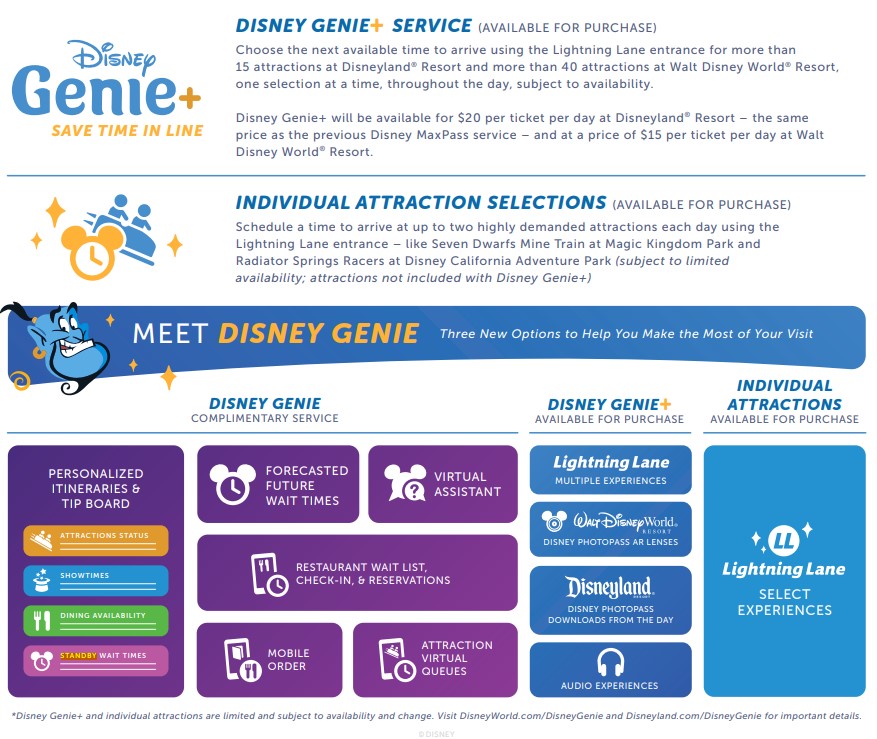 Overview of the Genie+ and Lightning Lane features (Disney)

Disney World resort guests will have an advantage for picking up these pay-per-ride passes, as they’ll be able to purchase access beginning at 7 a.m. the morning of their visit. This officially brings an end to Disney World guests need to plan their ride reservations 30 to 60 days in advance.

There is a free version of Genie that act as a guide for your day at Disney parks, including forecasting future wait times and designing custom itineraries. Just don’t call them touring plans.

D’Amaro said in his D23 interview that part of the motivation was simplifying the visit to a Disney park, which, pre-pandemic, had required planning certain aspects of your Disney World trip months in advance.

“ What our guests were telling us was that they wanted more simplicity and spontaneity,” he said. “They wanted it to be a more convenient tool for them. We’ve done that with the Genie suite of products, so you don’t need to be scrambling and worried. Let the tool do the work for you. And then, show up and enjoy yourself. It’s that idea of simplicity that we love at Disney, and it’s what our fans told us they want. So this applies perfectly to Walt Disney World.”